UPDATE: GTD team Moorespeed (featured below) will not take part in this weekend’s meeting at CTMP. The entry list revealed for the weekend features 36 cars.

And at Corvette Racing, following Tommy Milner’s big off at Watkins Glen, the team has called up Marcel Fassler on short notice to replace him. Milner suffered an injury to his left hand which has ruled him out.

“I’m very sorry for Tommy’s injury,” said Fassler. “I’m sure It is a very difficult and frustrating situation for him, and I hope he is back in the Corvette soon. It will be a different experience driving the C7.R around Canadian Tire Motorsport Park than what I am used to at Daytona, Sebring and Le Mans.

“But Corvette Racing is a very close team. We all work well together, so I’m positive the team will do the best job possible helping me get up to speed.”

The third round of the IMSA Endurance Cup is behind us and the teams are already preparing for their next race at Canadian Tire Motorsports Park this weekend.

CTMP is round seven of the season and the fifth meeting where all four classes will compete.

Before the weekend of action starts, there’s plenty of news items to go through from last weekend’s racing at Watkins Glen, which produced a historic result: Mazda’s first win.

The stats behind Mazda’s first win

Mazda Team Joest’s maiden DPi win was significant for a multitude of reasons. Not only does it end the brand’s winless drought, but it also marks the first win for the Multimatic LMP2 chassis, the Mazda is utilising a heavily modified and revised version, meaning all four current LMP2 chassis now have a win. 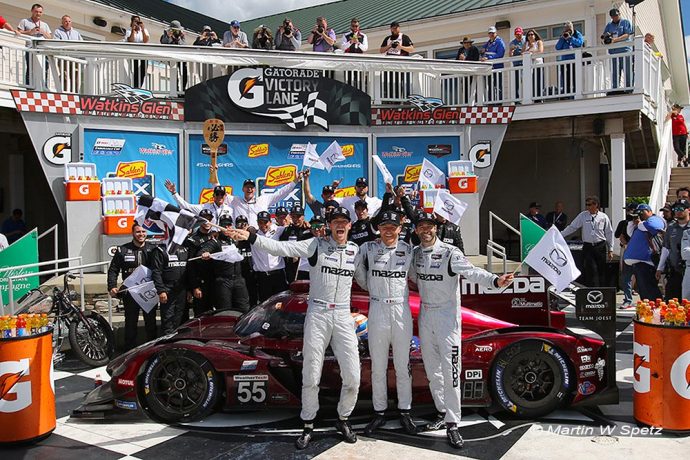 The win came in Mazda’s 54th IMSA prototype start. It was the first overall sportscar race victory for Mazda since the American Le Mans Series Baltimore Grand Prix on September the 3rd 2011 when Humaid Al Masaood and Steven Kane steered the Oryx Dyson Racing Mazda-Lola to the top honours.

Will it be the first of many? John Doonan and his dedicated team certainly hope so.

Porsche’s GTLM victory on Sunday may not have stolen many headlines, but it was significant as the brand hadn’t won at The Glen as a factory prior to last weekend. 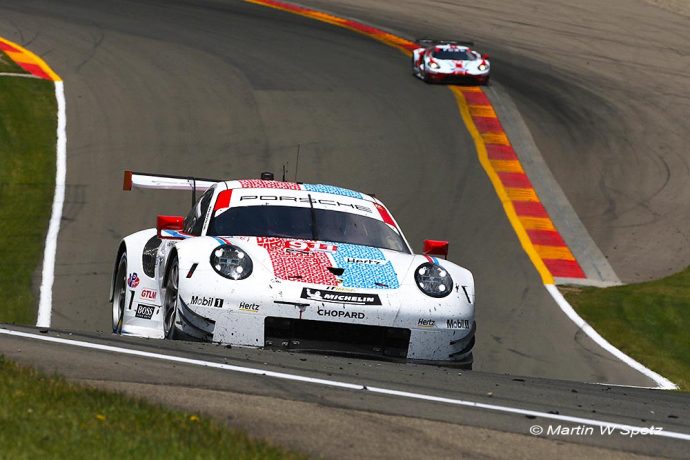 The last Porsche win at The Glen came in 2015, customer team Falken Motorsports with its #17 911 of Wolf Henzler and Bryan Sellers victorious.

Before that, a Brumos Porsche won back in 2011 in Grand Am’s visit to the full circuit – the tribute livery back on winning ground!.

Patrick Pilet and Nick Tandy’s win means that Porsche has won as a factory at every current track GTLM competes at except Laguna, only other circuit is Indianapolis, which the IMSA WeatherTech series only visited once back in the inaugural season of the Grand-Am-ALMS merger.

A GTLM-spec Porsche has won at Laguna before, but back in 2011 with Flying Lizard.

Jeroen Bleekemolen has revealed that Riley Motorsports is preparing a new Mercedes AMG GT3 for this weekend’s race.

A crash happened in Turn 2 of the 6 hour race and there was no chance to avoid it for Ben. Really unlucky again. But we’ll be back next weekend at Mosport 🇨🇦 for revenge! The team is on it to prepare a new car already 👊 pic.twitter.com/RuYJkMxPTf

The team’s original chassis was damaged heavily in a multi-car incident on the opening lap, at Turn 2 at The Glen.

New chassis for Moorespeed too?

Another GTD team with a lot of work to do after Watkins Glen is Audi outfit Moorespeed. The team’s R8 LMS GT3 was withdrawn from the meeting after a huge off for Will Hardeman on Friday during practice which caused a fire.

The car had to have its roof cut off by the IMSA extraction team after the impact at the barriers on the inside of the Bus Stop. Thankfully Hardeman was able to walk away under his own steam before heading to the medical centre and then a local hospital for checks.

The team is understood to have access to a spare chassis. It is not yet clear whether the team will make the trip to CTMP at this stage.

Corvette’s mechanics have been hard at work since Sunday too. Corvette told DSC that the #4 chassis, which was a spare chassis and damaged heavily in the same crash that befell the #33 Mercedes, has been repaired and will be ready for action this weekend. 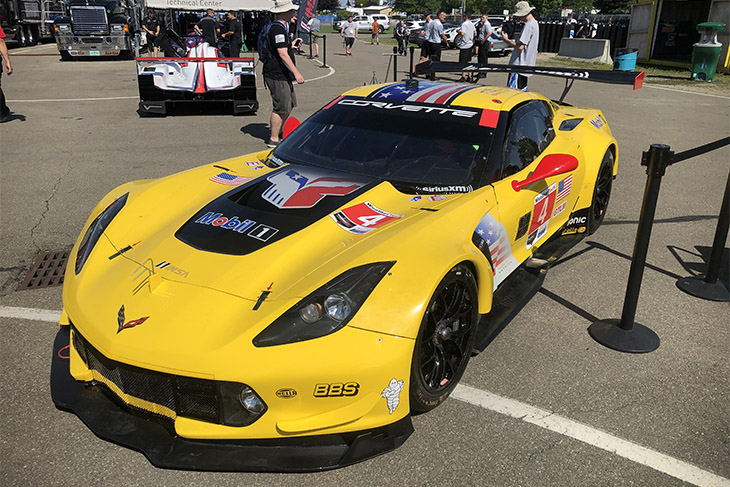 The team hopes that the #64, which was damaged heavily at Le Mans during Marcel Fassler’s incident at the Porsche Curves (prompting the use of a spare), can be rebuilt in case it needs to be used later in the IMSA season.

On a more positive note, the #3 Corvette C7.R had a strong run last weekend, Antonio Garcia and Jan Magnussen in the hunt for the GTLM win at the end of the race.

2019’s 6 Hours of The Glen was Magnussen’s 150th race for Corvette. In what has been a remarkable career with Chevy for the Dane, he has amassed 35 wins, four of them at Le Mans and four championships.

The points standings for the WeatherTech Championship have seen a significant shuffle since last weekend. 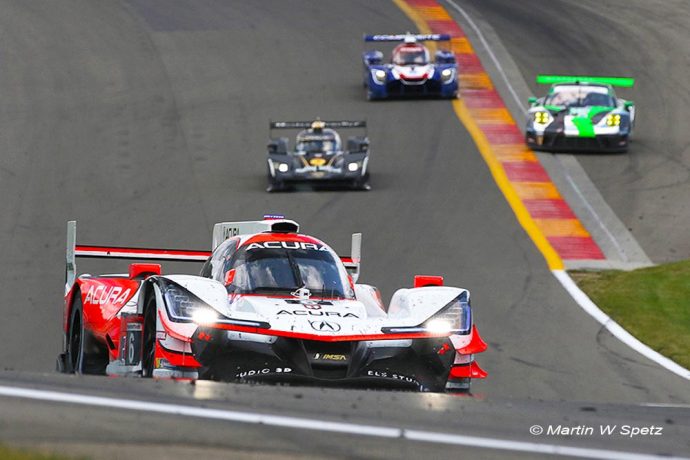 With a third-place finish, Dane Cameron and the Juan Pablo Montoya have now moved into first place in the standings with a slim lead of just one point over Action Express’ Sebring winners Felipe Nasr and Pipo Derani.

In GTLM meanwhile, it is a Porsche 1-2 unsurprisingly after the brand has netted four straight wins in the class. The #911 duo of Nick Tandy and Patrick Pilet lead Laurens Vanthoor and Earl Bamber in the #912 by just a single point.

But the #3 Corvette drivers, Jan Magnussen and Antonio Garcia, are tied for second with 151 points, another a strong finish on Sunday.

GTD, on the other hand, isn’t quite as close up front. With their first win of the season, Meyer Shank Racing’s Trent Hindman and Mario Farnbacher have opened up a 16-point lead over AVS Lexus racers Jack Hawksworth and Richard Heistand.

The race at Watkins Glen was, of course, the third of the four Michelin Endurance Cup rounds. 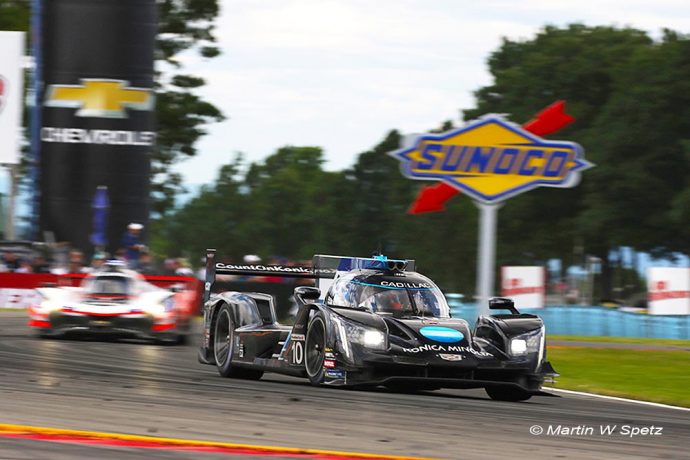 With just Petit Le Mans to go Wayne Taylor Racing’s Jordan Taylor and Renger van der Zande lead the way, their win at Daytona at the start of the year the foundation for its lead.

It’s tight though, Derani, Nasr and their third driver for the campaign Eric Curran are two points back, their Sebring win a major factor.

With a win at Watkins Glen Mazda’s trio of Harry Tincknell, Olivier Pla and Jonathan Bomarito are nine points adrift in third.

Tandy and Pilet are the GTLM class leaders in the Endurance Cup, with a six-point buffer between them and Ford driver Richard Westbrook and Ryan Briscoe and Porsche drivers Earl Bamber and Laurens Vanthoor who sit on 25 points. Magnussen and Garcia are a further point adrift.

The top eight driver combinations are all within 10 points of one another in GTD after three races.

Despite crashing out of the race at Watkins Glen early, Jeroen Bleekemolen, Ben Keating and Felipe Fraga are leading the way on 29 points, with WeatherTech Racing’s Jeff Westphal, Cooper MacNeil and Toni Vilander three points off in second. MSR’s Mario Farnbacher, Trent Hindman and Justin Marks are third with 25 points.

The new Michelin tyres for the IMSA WeatherTech runners continue to produce stunning lap times. And Last weekend was no exception, with most of the lap records falling. 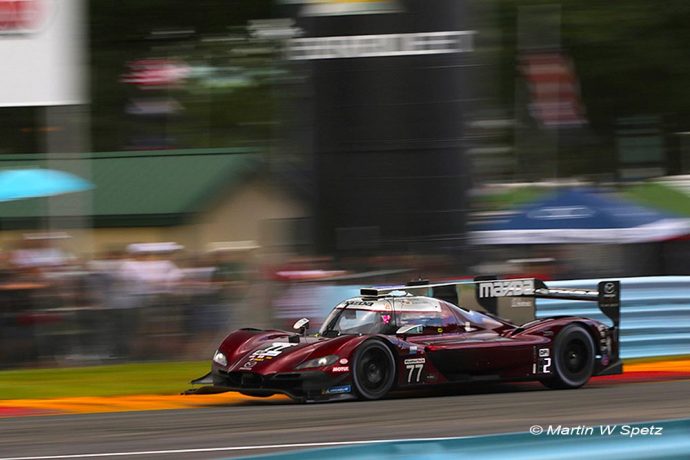 In Qualifying Mazda’s Oliver Jarvis (who also shattered the lap records at Daytona and Mid Ohio) set a best lap of 1:29.639 around the 3.4-mile circuit, breaking Pipo Derani’s previous track record of 1:34.405 set in 2017 by almost five seconds to take the pole in the #77 Mazda DPi.

Then in the race, three of the four class race lap records fell too.

“No surprises” on next year’s calendar 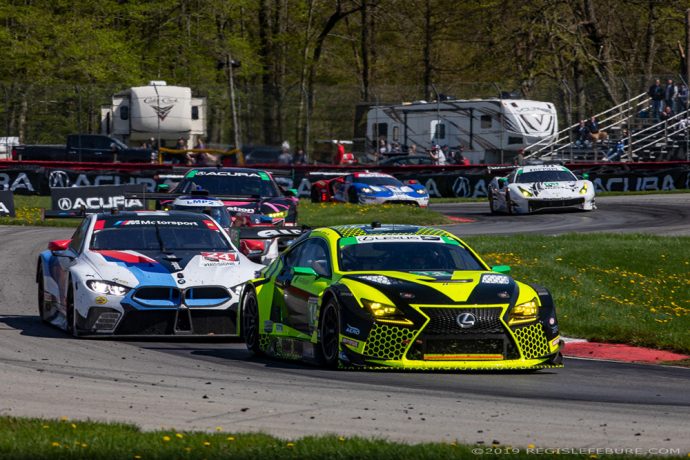 Currently, the WeatherTech championship and its support series have a firm core of circuits they visit annually.

The last significant calendar change came last year when the race at Circuit of the Americas was replaced with a return to Mid-Ohio.