It took 884 days for Mazda to score its first DPi win with the RT-24 P, but just seven to take a second. This time around, however, it wasn’t the #55, but the #77 of Olivier Jarvis and Tristan Nunez who scored the win for Mazda Team Joest.

It was a race that at times looked all but certain to go green the entire two hours and forty minutes, but ended up being uprooted by two full-course yellows and even a red flag.

“There are no words to describe right now,” said Nunez. “This team has worked so hard, we put all the pieces together. These jets guys are top-notch.”

Mazda team boss John Doonan dedicated the win to Shabral Pruett, the wife of our friend at RACER, Marshall Pruett, who is in the midst of a battle with cancer.

With a stalled car on the track and forty-five minutes to run, a handful of DPi entrants dove into the pits with the looming threat of a full-course yellow. That included the leading #55 Mazda RT-24P and the second-placed #77 Mazda.

Drama would befall the #55 Mazda, though, as a slow pitstop left it stranded in its box. Jarvis accelerated out of the pits, passing his teammates and taking control of the lead of the race. With some 45 minutes to run there were still unanswered questions regarding fuel mileage for all the DPi cars, though.

Those fears were calmed by two full-course yellows and a red flag in the final 45 minutes which allowed for plenty of time to fuel save and for the #77 Mazda to take the victory.

After dominating the entire day and leading most of the race a second-placed finish for the #55 Mazda of Jonathon Bomarito and Harry Tincknell will be a tough pill to swallow. Bomarito made a pass for the lead early in the race on the #7 Acura Team Penske ARX-05c and did not relinquish it. Tincknell, though, had to watch the lead of the race he inherited slip away as the sister #77 Mazda sped away in the pits.

The #6 Acura Team Penske ARX-05c moved into third after their teammates in the #7 Acura opted for a splash and dash to ease concerns before the full-course yellows and the red flag flew. That call ended up costing the #7 Acura a podium, they ended the day in fourth.

The red flag was the result of a big accident for the #50 Juncos Racing Cadillac DPi-V.R. Victor Franzoni appeared to lose the back of the car as the Cadillac crested over the hill at turn two. Franzoni reacted, but over-corrected the car, sending it sliding into the tyre barriers where it ended up on its side. The car was almost entirely buried by the tyres and was barely visible by the cameras.

Franzoni was sitting upright on a stretcher, he was awake, alert and was taken to a local hospital for further evaluation.

Pipo Derani was one driver who took full advantage of the late-restart caused by the red flag. The Brazilian worked his way into the top five. He crossed the line in the #31 Whelen Engineering Cadillac DPi-V.R. in fourth position, two seconds behind their championship rivals in the #6 Acura.

The #52 PR1 Mathiasen ORECA 07 of Dalton Kellet and Matt McMurry took home the win in LMP2, they to follow up their triumph at Watkins Glen with a second consecutive win in their class. With this win, Matt McMurry takes the lead of the LMP2 championship.

They were helped by the fact that the #38 Performance Tech ORECA 07 ran into technical gremlins near the race’s halfway mark. The #38 ORECA lost two laps but most of the damage was done when Cameron Cassells took a trip to the barriers on the exit of Moss Corner. There was only minor damage to the front left but the car lost a further six laps.

Five in a row for Porsche in GTLM

For most of the race, it looked like BMW Team RLL’s #24 BMW M8 were poised for victory. That was before the #912 Porsche 911 joined the equation, though, and stole the show. 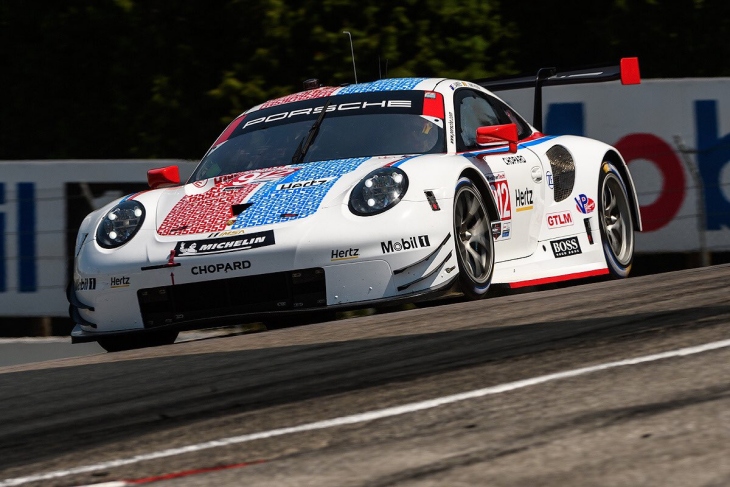 By the end of the day it proved to be a strategy call that made the difference for the #912 Porsche. It netted a fifth consecutive victory for German marque in GTLM and a third win in 2019 for Laurens Vanthoor and Earl Bamber.

“In the end the car was good, we tried something on strategy and it worked out perfectly,” said Vanthoor.

“Three wins this year is pretty good. It’s going well but in this championship, it is so close, you just need to be up there the whole time,” he added.

Earl Bamber and Laurens Vanthoor were some of the first GT Le Mans runners to take to the pits and their undercut strategy worked to perfection as they slingshotted to a lead of ten seconds. The pole-sitting #24 BMW with John Edwards — even with restarts bunching the field — could not respond and mount a challenge to the #912 Porsche.

Porsche and BMW battling was a theme of the race, the two German marques were untouchable for Ford and Corvette who played virtually no part in the fight for the win.

The aforementioned #24 BMW of Edwards and Jesse Krohn ended the race just over one second behind the winning Porsche. Rounding out the podium was the #911 Porsche 911 of Nick Tandy and Patrick Pilet who exchanged nudges and bangs with the #25 BMW M8 late in the race.

The pair of Ford GTs ended the day in fifth and sixth with the #67 Ford of Richard Westbrook getting the better of Joey Hand and Dirk Mueller.

Seventeen seconds off the back of the leader at the chequered was the #3 Corvette C7.R, Jan Magnussen and Antonio Garcia bested only their teammates in the #4 Corvette C7.R.

The #96 Turner Motorsports BMW M6 capped off a stellar weekend with a dominant win in GT Daytona. 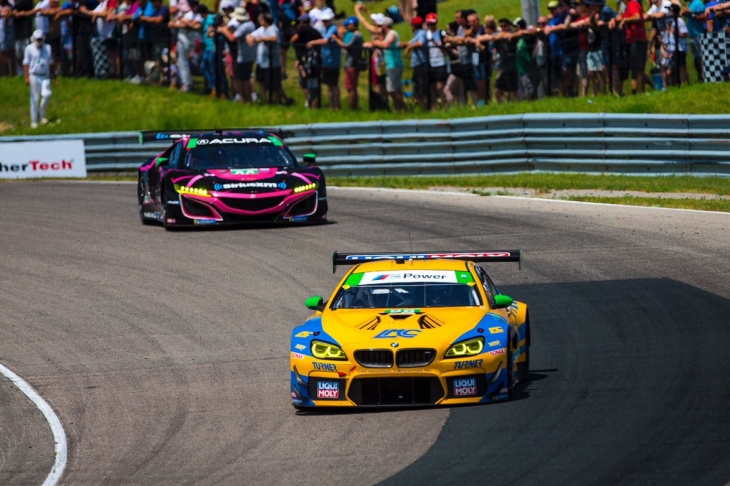 “It feels really really good, I’m so proud of my guys. The Turner guys deserved this a long time ago. I’m really happy and Robby [Foley] is amazing.” Said Auberlen. Who with a win here scores his 59, leaving him just one win behind the record set by Scott Pruett.

Foley started the car from pole position and maintained the lead until he handed it over to Auberlen. The only time the #96 BMW spent outside of the lead of the race was during the two green-flag pit cycles.

Second in GTD was the #86 Meyer Shank Racing Acura NSX GT3 of Mario Farnbacher and Trent Hindman who spent the entirety of the race in the shadow of the BMW but never had enough to make the pass.

Hindman made one go at the lead early in the race, throwing the Acura underneath the #96 BMW at Moss Corner. The two made contact but the #96 BMW kept the lead. It proved to be the only challenge the #96 BMW had to fend off in what turned out to be a rather uneventful GTD race.

Townsend Bell and Frankie Montecalvo in the #12 AIM Vasser Sullivan Lexus RC-F rounded out the GTD podium with a solid run. Much better than their teammates in the #14 Lexus RC-F which had its day ended early with a broken steering rack after contact with the #9 PFAFF Motorsports Porsche 911.