The course record on the hillclimb has stood for 20 years, Nick Heidfeld posting a time of 41.60 seconds n the then-current McLaren MP4/13.   In recent years current F1 cars have been barred from full timed runs but after a run in 2018 that came close, Romain Dumas and the Pikes Peak-conquering Volkswagen ID.R EV Prototype beat the record three times in the four day meeting, the best time set on Saturday with a staggering 39.9 second run.

A first reunion since Le Mans 2003 of the race winning trio for the Bentley Speed Eight was foiled by foul play.   Whilst Guy Smith and Tom Kristensen were at the Festival of Speed, Dindo Capello didn’t make it after his briefcase was snatched as he checked in for his flight to London.

Ever seen a priceless Le Mans winner do a burnout? #FOS pic.twitter.com/eaipbygSKf

The Festival of Speed has, for some time now, been the de facto UK Motor Show and there were a flurry of launches of cars both for track and road use.

Are you looking forward to seeing the R8 GT2 race? #FOS pic.twitter.com/Gkvu37soY3

Add to that the return of the De Tomaso marque with the beautiful P72. 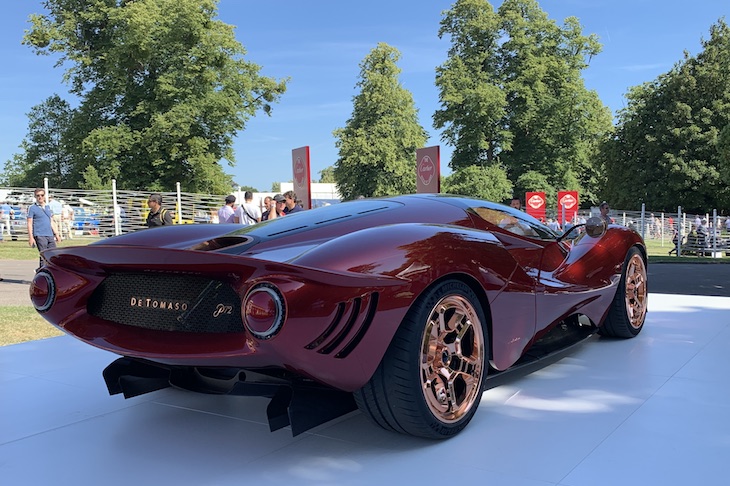 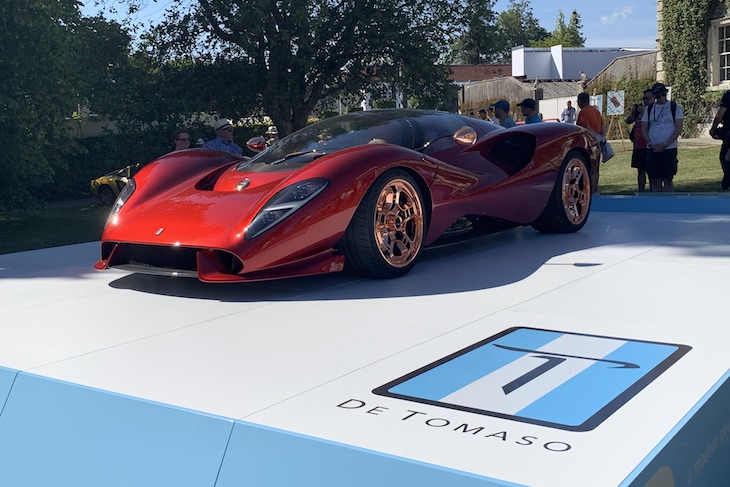 And the ‘dynamic’ debut too of McLaren’s new GT, Aston Martin’s Rapide E, The Honda e and several others. 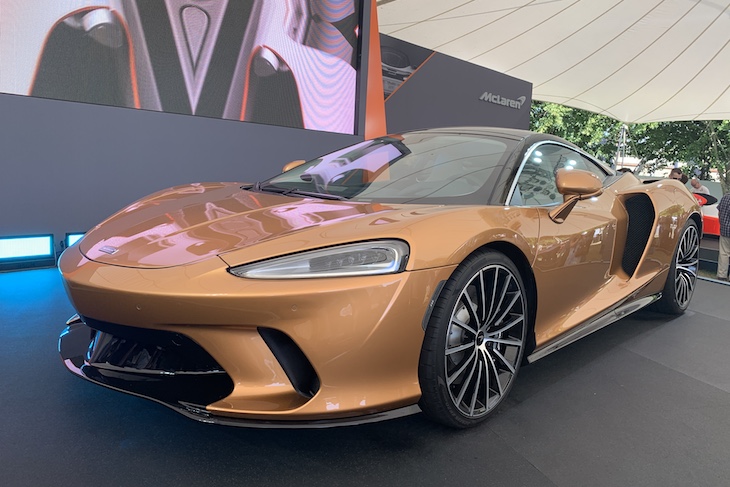 The first @McLarenAuto you can fit your skis or golf clubs in 🧐 #FOShttps://t.co/IBbRSNqElP

The forthcoming Aston Martin DBX SUV and a prototype of the soon-to-be launched Land Rover Defender were run up the hill still both in camouflaged liveries.

The first SUV by @astonmartin! #FOShttps://t.co/NUhWsjAcwY 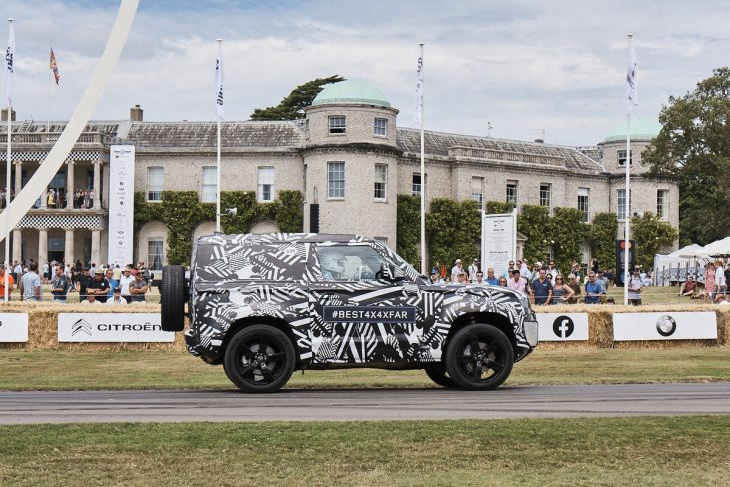 Lotus… is back in GTs #FOS pic.twitter.com/L4FdkJNck4

A vast array of familiar faces was present over the four days of the Festival, many of whom will feature of a Festival Special Edition of Inside the Sportscar Paddock, including: 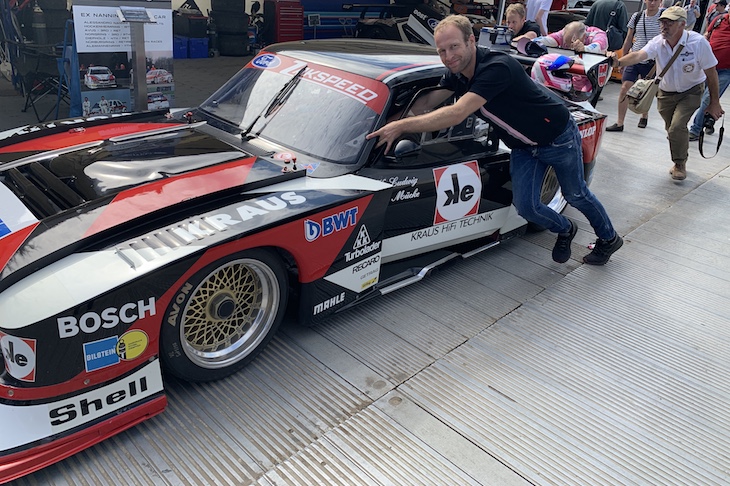 How do you rate this run? #FOS pic.twitter.com/wcbH9hS0Vo 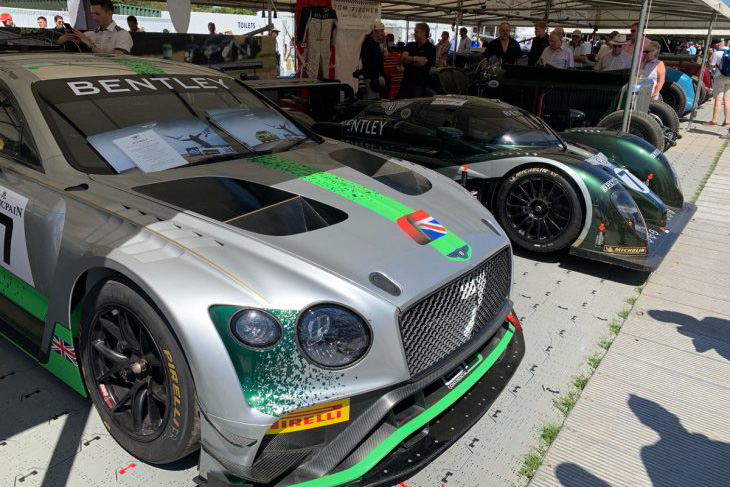 Joe Osborne was on driving duty in the factory development McLaren 720S GT3. 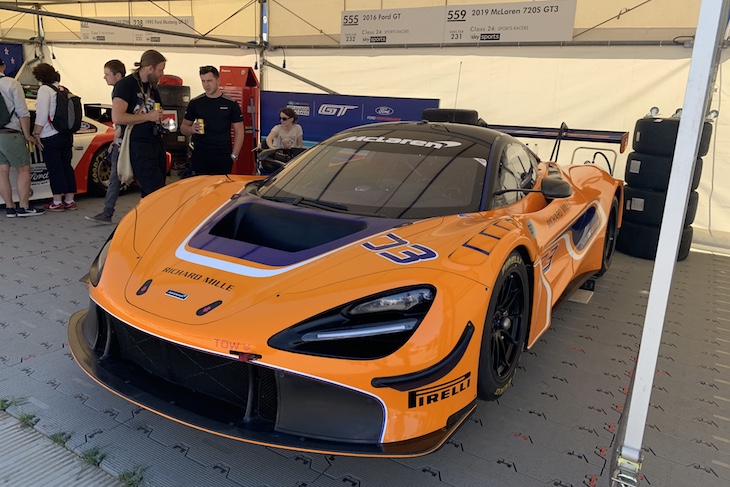 Martin Short was present too, providing assistance to son-in-law Luke Kendall who was tending to the ex-Rollcentre Dallara Judd. It’s now in its gorgeous 2002 ORECA/ Playstation 2 colours for owner Jeremy Cottingham, who had a moment against the hay bales on Saturday!

Ligier UK was present with a quartet of cars, the modern JS P3 LMP3 coupe and JS2 R one-make GT racer, the 1979 JS 11 F1 car and the 1973 JS2 sports racer. Ryan Cullen, Richard Dean and Phil Hanson all on duty for United Autosports and Ligier UK. 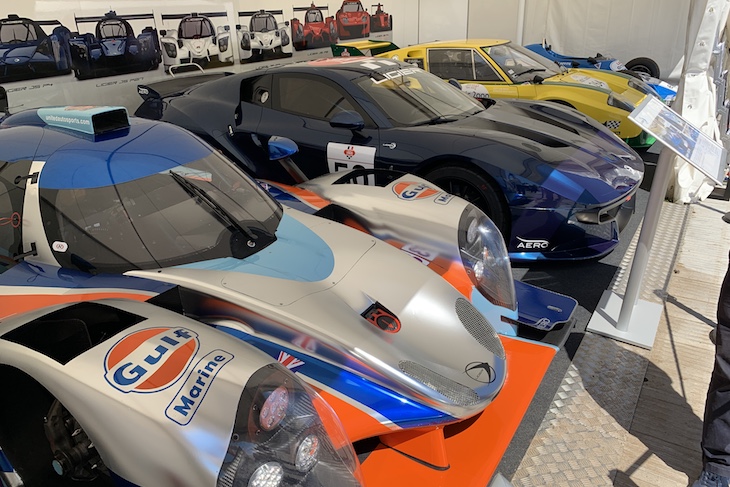 In addition to the newly launched Audi R8 LMS GT2 Porsche’s GT2 class offering the 911 GT2RS Clubsport was displayed, together with a pair of the new 935s. The Porsche-only exhibition race supporting the Spa 24 Hours will feature both the GT2RS and 935s on the c.20-car grid.

Does the new Porsche 935 channel the spirit of Moby Dick? #FOS pic.twitter.com/3jZhYtahB0

The Festival has long been the stage for successful teams to show off their race-winning machinery, the still race soiled #8 Toyota TS050 featured in the Toyota pavilion, whilst outside was the battle-scarred Toyota Gazoo Racing Supra from the Nurburgring 24 Hours. 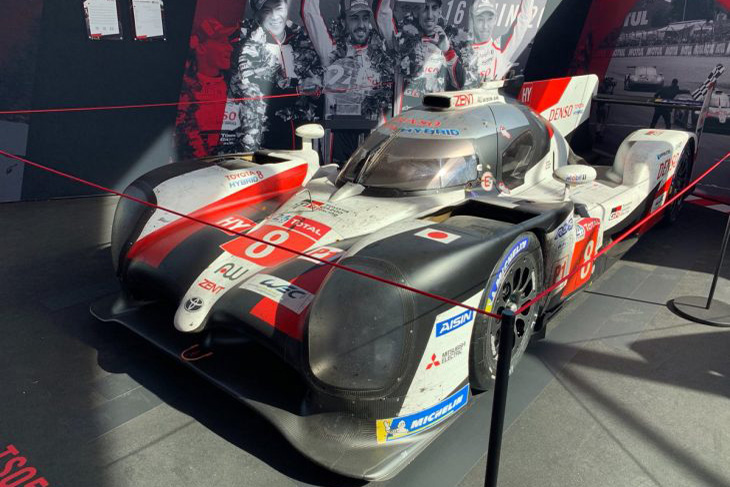 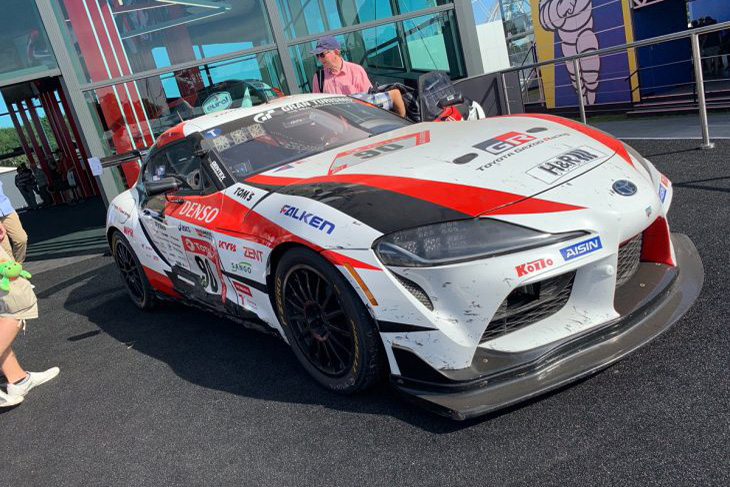 Porsche’s Le Mans race-dirty #92 WEC Championship-winning 911 RSR was on display too and there were two other mucky cars from the N24, the fire-damaged #19 Lexus RC F GT3 and the winning car, the #4 Phoenix Audi R8 LMS. 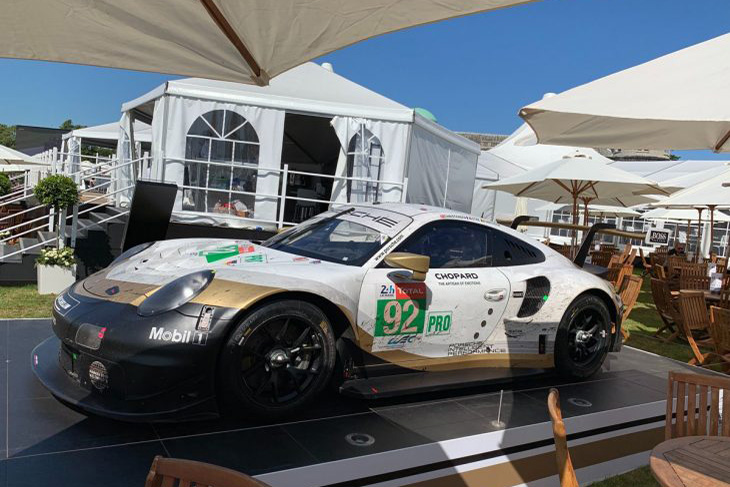 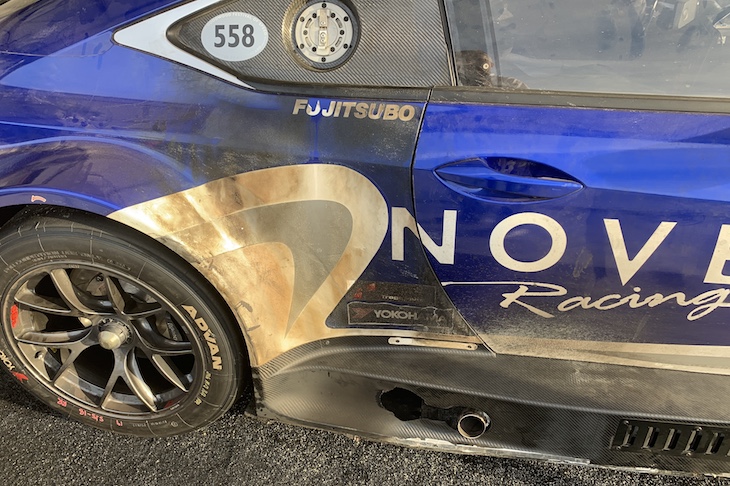 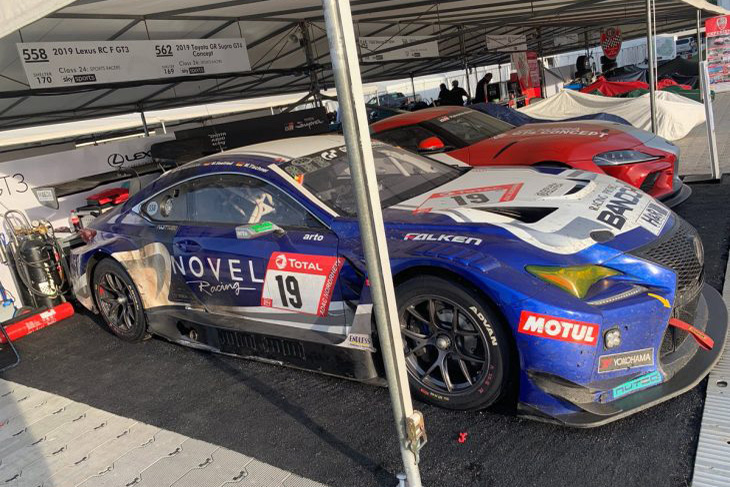 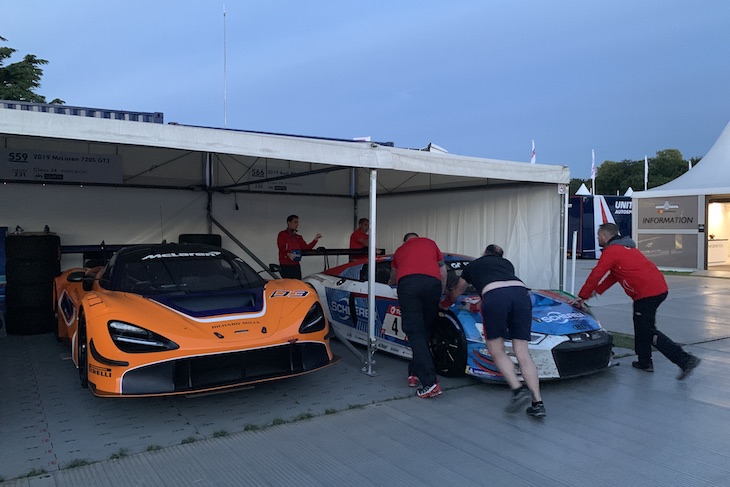 The Garage 59 crew, under the direction of Andrew Kirkaldy were on site too, but not with one of their GT3 Aston Martins, but instead with Alexander West’s 2000 McLaren MP4/15, driven by the owner and by Mika Hakkinen.

How did Lando Norris do in the McLaren Can-Am? #FOS pic.twitter.com/6H2L0dfLo2

There was an Aston Martin Nimrod on the hill too, and Suber Mercedes C9 and C11 group C cars, together with a selection of March sports prototypes, part of a stunning line up to mark 50 years of March Enginering.

Beyond that little lot, there was a bevvy of Aston Martin GT cars, Gregor Fisken’s ex Larbre Competition DBR9 pedalled on Thursday by Marino Franchitti, a factory Vantage GTE for Jonny Adam, and the Optimum Motorsport Vantage GT3 for Olly WIlkinson.

The #62 R-Motorsport V2 Vantage GT3 was on display too, still in its Bathurst livery, complete with post race graffiti! 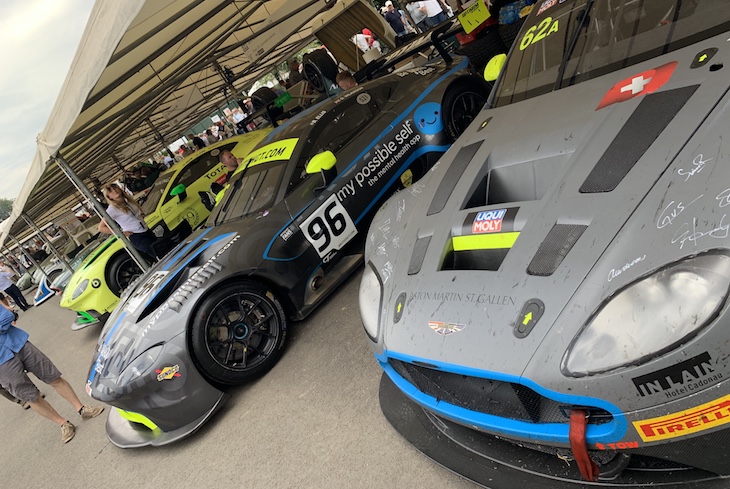 The modern racing Astons formed part of a spectacular display to commemorate the Festival’s featured marque in their 70th anniversary year, the central sculpture this year featuring the 1959 DBR1, and each day of the festival seeing a parade of roadgoing and racing cars from Aston Martin to circle the sculpture accompanied by fireworks.

One of the most impressive themed displays of them all was a celebration of the Porsche 917, no fewer than twelve examples were present including some very special cars.

All those Porsche 917s, is this heaven? #FOS pic.twitter.com/ZSxG5OcylP

It wouldn’t be #FOS without a bit of #Porsche 917! pic.twitter.com/kX22GtPAU0

Which do you love more: The Martini or the Gulf livery? #FOS pic.twitter.com/Aw2wcQFGJR