The Blancpain GT World Challenge Asia season continued last weekend with another pair of races in Japan. Last time it was Suzuka, this time the meeting was at the Fuji Speedway.

Indigo Racing and Absolute Racing took wins though the latter’s pairing of Philip Hamprecht Tanart Sathienthirakul saw their lead at the top of the points standings shrink.

Manuel Metzger and MG Choi claimed theirs and Solite Indigo Racing’s second Blancpain GT World Challenge Asia victories of the season at Fuji Speedway on Saturday despite a slow puncture that threatened to derail the latter’s title hopes. 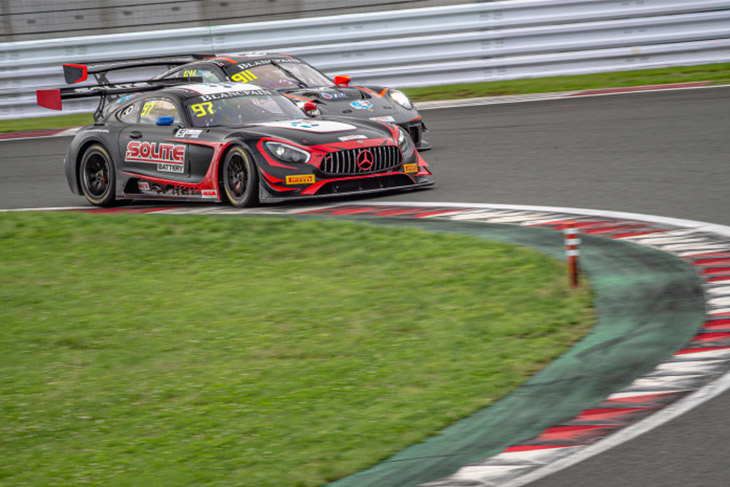 The Korean team’s Mercedes-AMG finished just 0.5s ahead of Audi Sport Asia Team Absolute’s Weiron Tan and Martin Rump who chased down Metzger during the second stint. Yuya Sakamoto and Marco Seefried completed the podium aboard their HubAuto Corsa Ferrari.

The first of this weekend’s two 60-minute races in the shadow of Mount Fuji saw 2019’s top-three title protagonists going toe-to-toe along with a potential outsider.

Points’ leader Tanart Sathienthirakul led away from pole but ran wide at Turn 1, which allowed fellow front row starter MG Choi to nip down the inside. His Thai rival gave chase initially before falling back into the clutches of Marco Seefried who had been drafted in to partner championship candidate Yuya Sakamoto.

The gaps between the top-three cars remained fairly steady throughout the opening stint until Choi’s pace suddenly dropped just before the pit window opened after 25 minutes. The Korean later revealed a slow puncture had become a cause for concern halfway through his stint but it wasn’t until the closing moments that Sathienthirakul was able to pass.

Naturally, Choi pitted at his first opportunity while both the Absolute Racing Porsche and HubAuto Ferrari continued. That decision actually played into Indigo’s hands, with Metzger able to lap faster on fresh rubber than his rivals who’d opted to stay out. That, allied to Sathienthirakul and Philip Hamprecht serving a five-second Pitstop Success Penalty, resulted in the Mercedes-AMG vaulting back into the lead after the stops had shaken out.

Behind, Weiron Tan’s quick opening stint pushed Absolute’s best-placed Audi from seventh to fourth and within striking distance of the leaders, which helped co-driver Martin Rump immediately inherit third from Hamprecht after the stops. However, the Estonian wasn’t finished and soon dispatched Seefried’s co-driver, Sakamoto.

Catching Metzger proved reasonably straightforward, too. The problem was finding a way around the Mercedes-AMG, which remained 0.8s clear for much of the final 15 minutes. Just half-a-second separated them at the finish.

Sakamoto took the chequered flag 0.9s further back after reeling in Rump, while Hamprecht finished a lonely fourth. However, he and Sathienthirakul will be content to see their main championship rivals serving 15 and five-second Success Penalties tomorrow while they race handicap-free.

TSRT enjoyed another strong run to fifth after David Chen made amends for a difficult start by battling back into contention. Indeed, the Chinese driver set the fastest time of anyone before the pitstops where he handed the Audi over to new co-driver Rahel Frey.

She just held off Yuta Kamimura’s charging ARN Porsche, which won the Pro/Am class thanks to the pace of Hiroaki Nagai who kept class rivals Piti Bhirombhakdi and Alex Au at arm’s length during a mighty impressive opening stint. Their respective ABSSA and VSR co-drivers Keita Sawa and Frederik Schandorff finished seventh and ninth overall after Absolute’s other Porsche shared by Yuan Bo and Leo Ye Hongli split the McLaren and Lamborghini.

David Tjiptobiantoro and Rio Haryanto completed the top-10 in their T2 Motorsports Ferrari.

Behind, Triple Eight’s Jazeman Jaafar set the fastest lap en route to 11th, while Ben Porter and Andrew Macpherson scored their second Am Cup victory of the season with AMAC Motorsport.

But there was a disappointment for Pro/Am championship leader and overall title protagonist Vutthikorn Inthraphuvasak whose Panther/AAS Motorsport Porsche was forced to retire with a broken bonnet that prevented the Thai driver from seeing out of his windscreen. 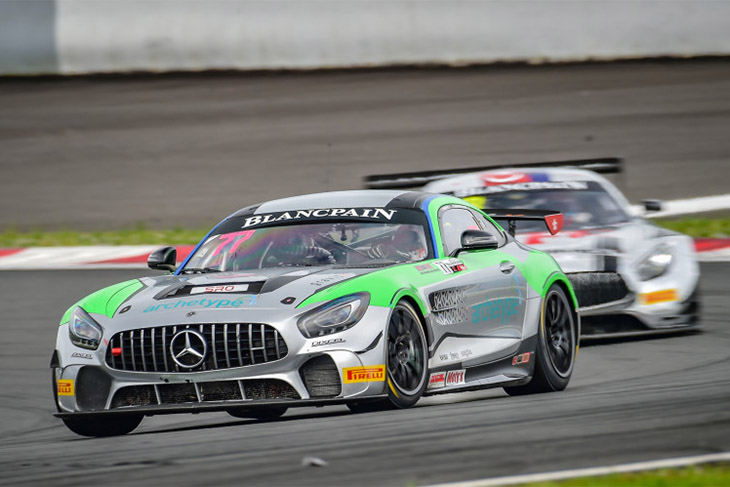 Kinoshita converted pole into an early lead but was unable to build the 10s gap over Merlin that would have negated the difference between each crew’s Pitstop Success Penalties.

Instead, the Mercedes-AMG emerged ahead of the M4. And although Jukuchou did close in on Pun, Craft-Bamboo’s lead was never under serious threat. 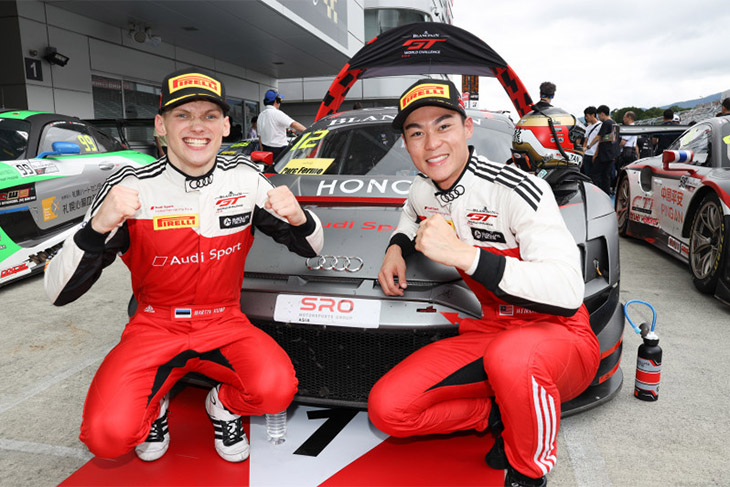 The Malaysian’s late dive down the inside into Turn 1 topped an action-packed final 10 minutes reminiscent of Suzuka’s second race two weeks ago when a similar Safety Car period also brought Pros and Ams together over the closing stages.

The Panther/AAS Motorsports Porsche Inthraphuvasak shares with Alex Imperatori took the Pro/Am spoils in second, while Craft-Bamboo’s Christina Nielsen and Darryl O’Young prevailed in a frenetic late scrap for the final podium spot.

Victory, by 0.742s, was long overdue for Weiron Tan and Martin Rump whose bad luck has been a factor of the season so far. A podium in yesterday’s race suggested the tide was turning, and Absolute’s duo proved it by overcoming a 10s Pitstop Success Penalty in today’s 60-minute contest to announce themselves as championship outsiders.

The opening stint belonged to Mercedes-AMG whose entries filled the top-four positions before the pit window opened. Alessio Picariello led away from pole in the best of Craft-Bamboo’s entries while, behind, Naoki Yokomizo moved up to second after bumping Triple Eight’s Jazeman Jaafar out the way.

Picariello’s pace meant he was 11s up the road once the pitstops began after 25 minutes, although some of that advantage was due to Jaafar remaining bottled up behind Anstone’s Mercedes-AMG. That also allowed Melvin Moh to remain a close fourth, while Rump’s Audi lurked in fifth.

Absolute were the first frontrunners to pit and naturally slipped down the order as a result of their longer mandated pitstop. However, the Audi had also been the leading Silver Cup entry before the stops, offering hope that Tan could exploit his natural speed advantage against amateurs Jeffrey Lee, Jefri Ibrahim, Xu Wei and Daniel Au who ran first-to-fourth once the window closed.

At first their advantage seemed insurmountable. Picariello’s co-driver Lee was almost 10s clear of Triple Eight’s Ibrahim, while Vutthikorn Inthraphuvasak, whose co-driver Alex Imperatori pitted from sixth after starting ninth, was closing in on both of them after passing Wei and Au soon after the stops.

Then, with 15 minutes remaining, a Safety Car was called while marshals dealt with T2 Motorsports’ stranded Ferrari. When racing resumed, Tan was at the tail of a five-car train covered by just a handful of seconds.

Within two laps he was up to second and chasing down Inthraphuvasak, who passed Lee soon after the restart. The Porsche and Audi then spent the next five minutes nose-to-tail as Tan waited for his moment. It came at the start of the final tour when the Malaysian darted to his right and down the inside into the heavy braking zone for Turn 1. Inthraphuvasak cut back on the exit and ran side-by-side with the R8 through Turn 2 before Tan finally completed the race-winning move.

Behind, the late Safety Car had brought more Silver Cup entries into play, and it was one of those, Craft-Bamboo’s Darryl O’Young and Christina Nielsen, who ultimately finished third. The latter first avoided the contact between Anstone’s Wei and HubAuto Corsa’s Marco Seefried that accounted for both the Mercedes-AMG and Ferrari before passing Ibrahim and taking advantage of Lee’s drive-through penalty for multiple track limits infringements.

Likewise, TSRT’s David Chen who finished fourth after the Audi he shares with Rahel Frey started 17th and pitted 14th. Ibrahim held on to finish second of the Pro/Am runners and fifth overall after outpacing Alex Au’s VSR Lamborghini over the closing laps.

Behind, the overall championship’s top-two underlined the unpredictability of today’s race by somehow finishing seventh and eighth despite serving unscheduled pitstops and time penalties. Both were involved in the same lap one incident that resulted in Manuel Metzger being spun to the back and Philip Hamprecht picking up a puncture. While the latter and his Absolute co-driver Tanart Sathienthirakul fought back to finish seventh without further issues, the Solite Indigo Racing Mercedes-AMG had to overcome a 15s Pitstop Success Penalty for winning yesterday’s race and another stop/go penalty incurred for a short pitstop. Somehow, Metzger and MG Choi finished eighth.

Both ARN Racing and ABSSA Motorsport will also wonder what might have been without their delays. Hiroaki Nagai and Yuta Kamimura came home ninth despite a drive-through penalty, while a late puncture forced the McLaren Piti Bhirombhakdi shares with Keita Sawa to pit under the Safety Car. They completed the top-10.

The Vattana Motorsport Lamborghini of Chonsawat Asavahame and Akihiro Asai won the Am Cup class by 2.5s from Kei Nakanishi and Shigekazu Wakisaka’s LM Corsa Porsche after a race-long battle that also featured Ben Porter and Andrew Macpherson, who completed the podium.

Just six points now separate championship leaders Sathienthirakul and Hamprecht from Choi, while Sakamoto, who failed to score today as a result of Seefried’s puncture, is another eight behind. Inthraphuvasak and Rump/Tan are fourth and fifth, 17 and 26 points adrift of top spot, respectively.

Further back, BMW Team Studie’s Sunako Jukuchou and Takayuki Kinoshita extended their GT4 championship lead with victory ahead of iRace.Win’s Mercedes-AMGs. Joe Chi and Keo Chang got the better of team-mates Ringo Chong and Setiawan Santoso, while yesterday’s winners, Jean-Marc Merlin and David Pun, lost ground due to a problem in the pits. 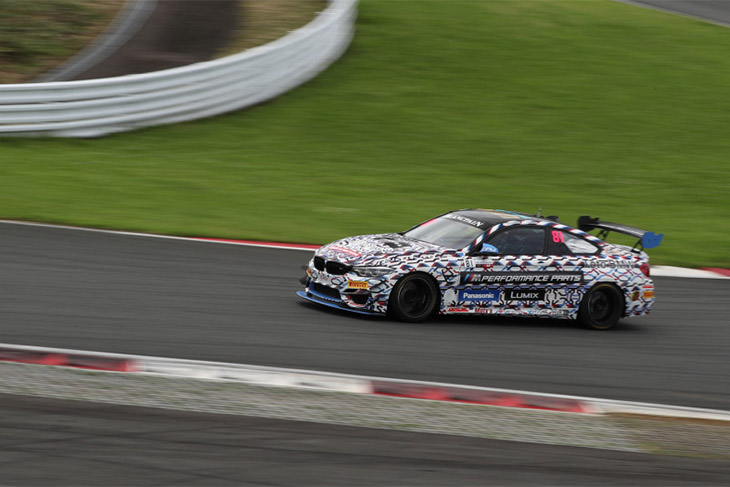 BMW Team Studie’s Sunako Jukuchou and Takayuki Kinoshita made the most of Craft-Bamboo’s pitstop problem to increase their lead at the top of the championship with the win.