The team’s performance was a comfortable one. It won the race by seven laps and came just a single tour of the circuit shy of equalling the event’s record total. The victory extends its winning streak in 24H Series competition to four in a row, keeping it firmly atop the 24H Series Europe GT points standings and in contention for the 24H Series Continents GT title.

“We keep ourselves out of trouble!” a jubilant Josef Kral told radiolemans.com’s Joe Bradley. “It was really tough, but the car was perfect. This track was probably the most physically demanding we’ve visited this year, so hopefully, Barcelona will be a bit easier!”

They were chased hard in the closing stages by the #22 Wochenspiegel Team Monschau Ferrari 488 GT3 driven by Georg Weiss, Leonard Weiss, Jochen Krumbach and David Perel, but the Porsche held on to keep the runner up spot. The Monshau Ferrari took third, finishing two laps adrift, making it a double podium for the ‘Prancing Horse’.

The third of the team’s Porsche 991 GT3 Rs, the #91 driven by Daniel Allemann, Ralf Bohn, Robert Renauer and Alfred Renauer had been in contention for the win but was forced to retire at half distance after catching fire on-track while running second.

Last weekend’s race was significant for a GT3 car not running in an A6 class. The brand new Mercedes AMG GT3 made its race debut at the meeting (pictured below), fielded by Mercedes-AMG Team Driving Academy and driven by Hubert Haupt, Maxi Buhk, Kenneth Heyer, Charles Putman and Rik Breukers. In the end, the car split the A6-Am runners by coming home sixth overall having completed 704 laps. 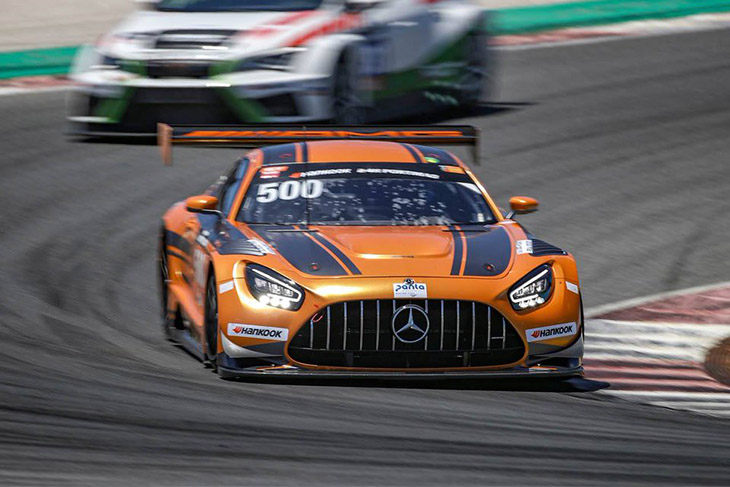 Further down the running order, a race-long battle for 991-class honours would eventually be won by the #909 DUWO Racing Porsche 991-II Cup of Andrey Mukovoz, Sergey Peregudov and Stanislav Sidoruk, which came home barely two laps clear of the pursuing #911 Porsche Lorient Racing 991.

Despite losing more than an hour to repair broken steering and on-track accident damage, the #980 MRS GT-Racing Porsche 991-II Cup survived to claim the final spot on the 991-class podium.

Next on the 24H Series calendar is the Barcelona 24 Hours, which will run from the 30th of August to the 1st of September.