In the long history of the Le Mans 24 Hours, there have only been three occasions when the winning car was on its last legs as it staggered past the chequered flag: 1928, 1977 and 1983. And that means that Hurley Haywood is the only driver in the history of the race to have won two of the classic nail-biters.

The 1977 event has quite rightly gone down in the record books as an all-time epic. Haywood was making his debut in the race, driving a works Porsche, no less. He was paired with Jurgen Barth, but their car ran into all sorts of mechanical problems early in the race. “When we got everything running again after the throttle stuck wide open, we had to get it slowed down, take the bonnet off, get it unstuck and get back to the pits, so by that time we had lost at least two laps. Once it got going Jurgen and I soldiered on, doing the best that we could.” 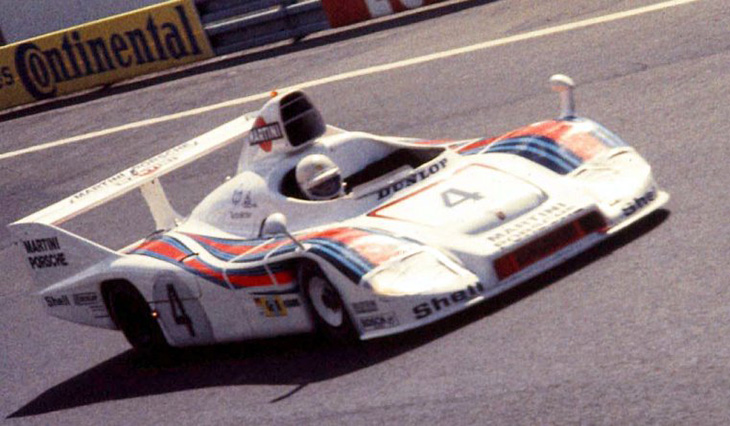 Which was better than the team’s lead car, which blew its engine after just 45 laps. Jacky Ickx was transferred from that 936 into the Barth/Haywood car, running a sterling 41st, and promptly drove into the realms of mythology. “When Ickx’s car failed, they brought him over to us and he did a marathon stint during the night, he would drive for three or four hours, Jurgen or myself would do one hour, then he’d get back in again. That was phenomenal, it went down in history as being one of the greatest drives ever.”

It certainly did. Quentin Spurring notes in the official history that from 2020 on Saturday to 0910 on Sunday, Barth and Haywood each did just one stint, while Ickx drove like a madman the rest of the time, hauling the car up the leader board, completely exhausting himself in the process. 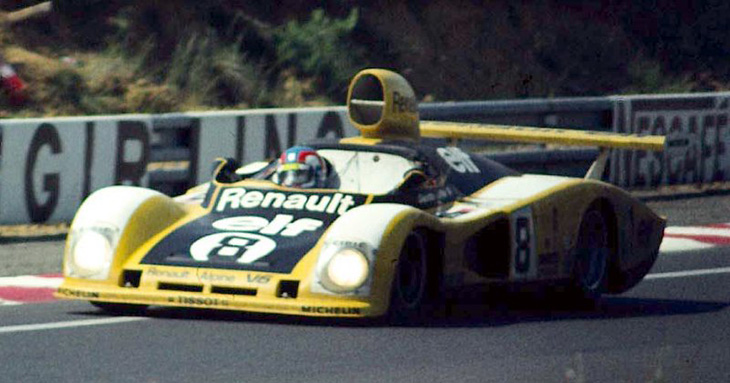 It was a fascinating equation. Haywood says that Porsche knew the Renaults would be fragile, and would have a reliability problem. But it was hardly the era for driving a car flat out for 24 hours either: “When people ask me, I say that I drive 100 percent of 90 percent so if you think about that for a minute, you have a benchmark of what 90 percent is and you drive 100 percent of that benchmark. So that’s a difficult thing to do, but I think the guys that are most successful in long distance racing know where that limit is, and are able to adjust.”

But not this time: Ickx “was told to go 100%, we all were, don’t go out and baby it. We had to, if we were going to put the car in a position where we were going to win. Ickx made up a tremendous amount of time during the night and we sort of followed, didn’t make any mistakes and drove fast.” And sure enough, as Sunday wore on, the Renaults wore out – one by one. By 10am on Sunday, Ickx’s heroics had brought the car into the lead. 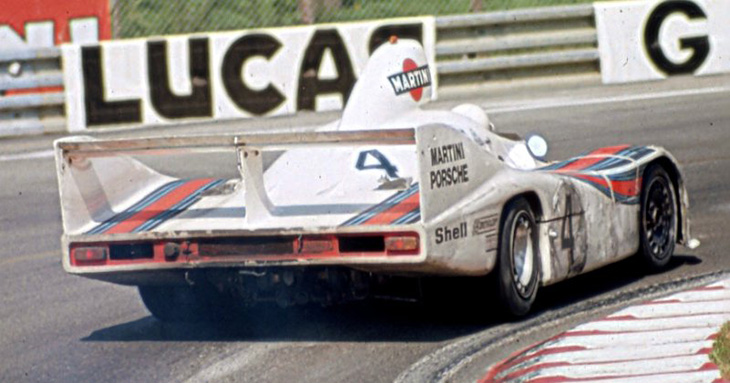 Jacky Ickx reflects that, “We all sublimised ourself and we did the race of our life. You drive well, generally you are competitive, but sometimes you are unbeatable, you don’t know why, everything you try, works. Not exhausted, broken. Such an effort for such a long time, because I did three stints in a row, one stop, three stints again, so I changed during the night the condition of the race because every hour we were gaining, it was fascinating not only for me, but the other drivers as well, so to enter in that game as well as the mechanics and the engineers. Things were lost, they started to believe we could do it, and flat out because you have nothing to lose.”

But in fact they did have something to lose. Haywood recalls, “Well, in 1977 the car basically blew up on the last lap. They had given me the honour of finishing the race, so I was driving around and everything was fine. But all of a sudden I felt the engine tightening up and I looked in my rear view mirror and there were clouds of smoke coming, so I slowed down and they said, “go slow and come back immediately to the pits”. So I did, and they got Jurgen Barth to get in [over an hour later, such was the extent of the Renault collapse] because Jurgen was more mechanically minded than I was.

“They pulled the spark plug out and the piston had a hole in it, so we continued on and he had a very strict lap time to do, and he was a little too fast so he had to make an additional lap, which was a disaster. But he made it and as the car crossed the finishing line the engine expired, we could not have gone another foot.” 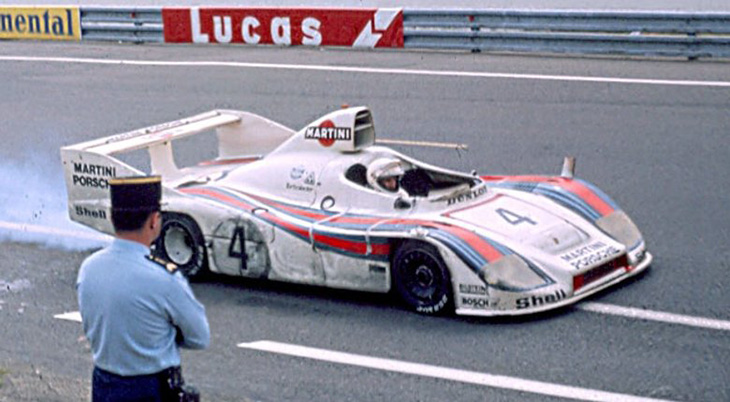 Like Haywood, the utterly exhausted Jacky Ickx was happy not to be on board for the last agonising lap (or two, as it turned out): “You know I’m not very brave in reality, I was happy that Barth finished the race for me. Just to think that you stop on the straight with the engine definitely dead, that was not for me, but I was destroyed also.”

And of course the irony was lost on no one: Renault, knowing that Porsche was in deep strife with one car gone and the other down in 41st place, had the race at their mercy, could choose their lap speed accordingly – and still couldn’t get their cars home. But Porsche, knowing the cars couldn’t really be driven flat out all day, had no choice but to try just that – and succeeded by the very barest of margins. The 1977 race richly deserves its place as one of the greatest races in any category, any time.

Amazingly, six years later, Haywood again found himself on the brink of losing the great race in its dying moments. He was again in a works Porsche, this time a 956, paired with Vern Schuppan and Al Holbert. But the pattern of this race was very different from the 1977 version: this time, Haywood’s car took the lead in the first few hours, and resolutely stayed there, apart from a few minutes on Sunday morning when they were overtaken by the sister car of Jacky Ickx/Derek Bell. 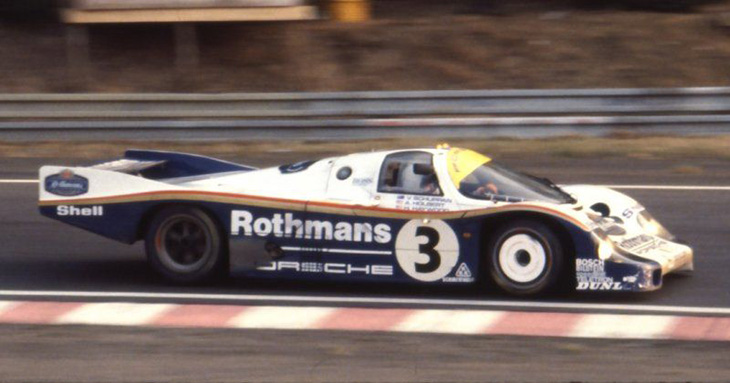 But that car ran into problems almost immediately after taking the lead, leaving Ickx searching for the replay button of that mesmeric form he found six years earlier. This time, he didn’t quite soar to those heights, but all the same, he and Bell started eating ominously into the comfortable lead enjoyed by Schuppan, Holbert and Haywood.

And then the leading car’s door blew off: “when you’re doing over 200 miles an hour on the Mulsanne Straight and the door flies off it’s kind of a bit alarming”, Haywood recalls wryly. “So they wouldn’t let us run with the door off, so we had to fix it. The crew guys got another door, but it wouldn’t line up with the latch. So one of the mechanics took his belt off and tied the door around the air cooler, and through the door and got it secure.

“Well, there was enough of a gap that the air coming into the intercooler part was deflected, because the door was not flush, that was enough to divert enough wind that the engine suffered from it. The small gap on the aerodynamic line was enough to fry the engine.

“Luckily Al Holbert was in the car at the finish and Al was also very mechanically minded, so when the engine seized as he was braking for Mulsanne Corner, he had enough knowledge to slow it way down, get it into second gear and pop the clutch. When he did that it was enough to break the engine loose and he literally puttered around to the finish line. All the time our sister car, Ickx and Bell, were catching us. They were a lap behind, so this issue took almost a lap to complete, and they almost caught us.

“I can remember Vern Schuppan and myself looking at each other saying “what is going on?”. They had actually brought us up to the podium before all this drama started and we didn’t know if Al could make it around. We were looking at our stopwatches because the other car was catching us really big, but then he showed up and managed to putter across the finishing line and it just stopped dead, wouldn’t go another foot.” 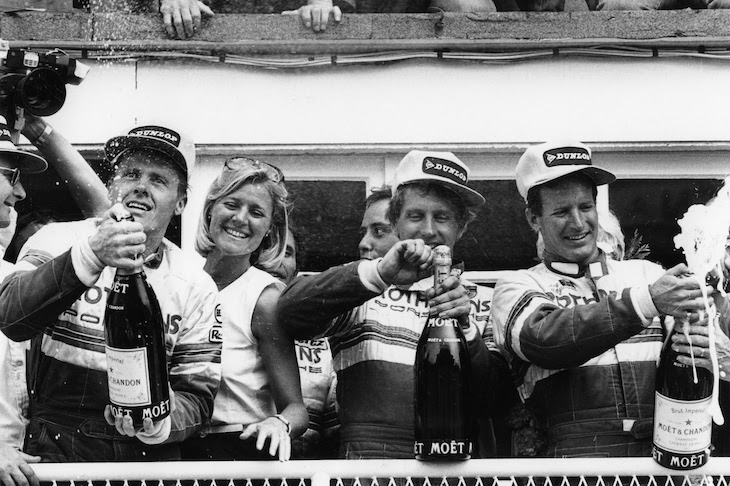 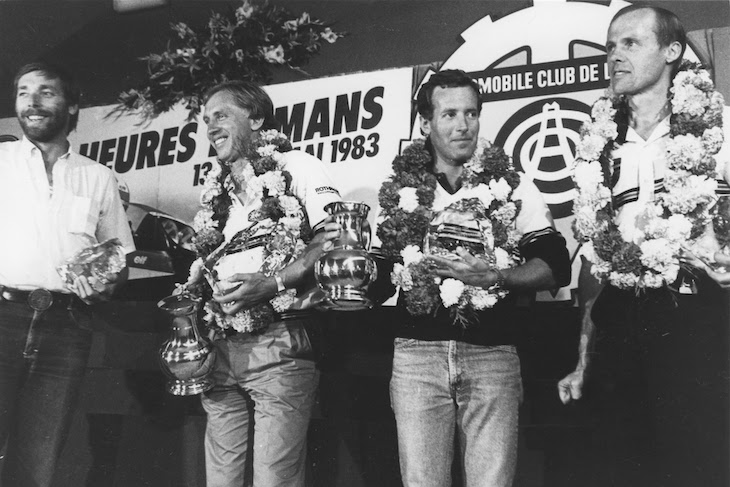 Hurley Haywood’s third and final win in the race came in one of the least-remembered 24 Hours of the last 30 years, in the Dauer 962 in 1994. This time he (and co-drivers Mauro Baldi and Yannick Dalmas) was the beneficiary of mechanical mishaps to others. But it is due to the extraordinary drama of the 1977 and 1983 races, and especially those nerve-wrenching finishes, that Haywood’s place in Le Mans folklore is secure. 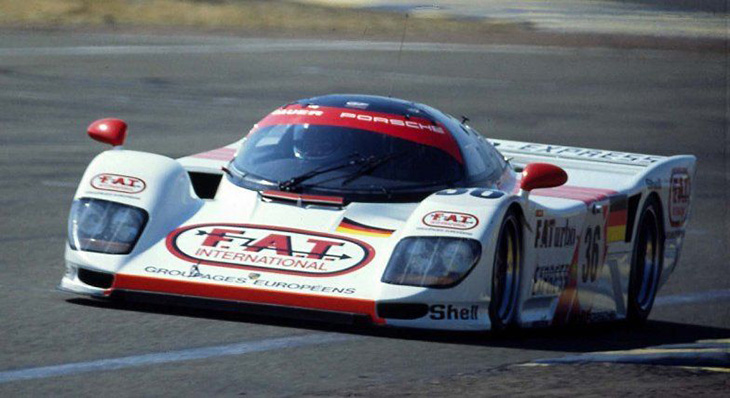 “That’s why I’ve got all this grey hair!”