The International GT Open series headed to Austria last weekend to race at the Red Bull Ring for the first time since 2016. There, it celebrated its 200th race on Sunday, and held a pair of races won by Emil Frey and Optimum Motorsport respectively.

Emil Frey’s dynamic duo of Albert Costa and Giacomo Altoè took a clean and clear second win of the year in the first race at the Red Bull Ring, scoring the team its fifth victory of the season. In the process, the pair also retook the lead of the standings, although by only 2 points. 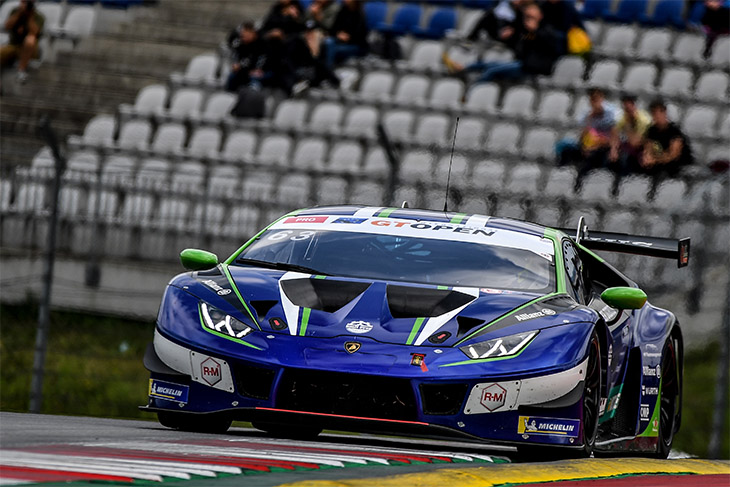 To score the win, they had to beat the guest-entered Senkyr Motorsport BMW M6 of Breitske Visser and Richard Gonda, and the Teo Martín Motorsport McLaren 720S of Martin Kodrić and Henrique Chaves, who dropped to second in the standings.

Frederick Schandorff and new recruit Tuomas Tujula gave Vincenzo Sospiri Racing its first success of the season in Pro-Am, with the Lambo beating the Teo Martín McLaren of Marcelo Hahn and Allam Khodair and Raton by Target Huracan of Jiatong Liang and Raffaele Giammaria.

In Am, standings leaders Alexander Hrachowina and Martin Konrad (HTP Motorsport) took no prisoners ahead of their home crowd, taking a fifth win of the season.

At the start, Teo Martin’s Saravia had a great start from pole in the #17 McLaren ahead of the Lambos of Costa and Grenier, while Kodric in the #59 Teo Martin 720S GT3 dropped down the order from second, letting past Crestani (#10 SPS Mercedes) and Gonda (#3 Senkyr BMW).

Positions at the top remained stable and with close gaps in the initial phases though Crestani was handed a drive-through for a starting procedure infringement.

By lap 18, Saravia led a train of cars all jostling for positions. Costa’s #63 Emil Frey Huracan was second ahead of Grenier’s #14 sister Lambo, Kodric’s McLaren and Gonda’s BMW, with the top five separated by only 7 seconds, with the driver change window opening one lap later.

After all changes, in lap 19, Altoè emerged in the lead in the #63 Lamborghini, with a 7-second advantage over the #3 BMW of Beitske Visser and 12 over Rueda who took over the reigns in the #17 Teo Martin McLaren had lost the lead at the stops. Chaves in the #59 McLaren was fourth ahead of Siedler’s #14 Lamborghini which completed the top five.

From there Altoè held onto the lead, while the cars behind fought for the final podium spots. By the end the #59 and #17 Teo Martin McLarens had swapped placed, the former climbing to third after Henrique Chaves muscled past Reuda.

On Sunday, Ollie Wilkinson and GT Open debutant Jonny Adam won Race 2 at the Red Bull Ring, giving the new Aston Martin Vantage and Optimum Motorsport their maiden win in the series, in what was the 200th GT Open race, adding to the feat of Villois Racing’s Aston Martin which won the 100th GT Open race back in 2012. It was Aston’s first GT Open win since Monza’s in 2016 when Salih Yoluc and Euan Hankey won for TF Sport. 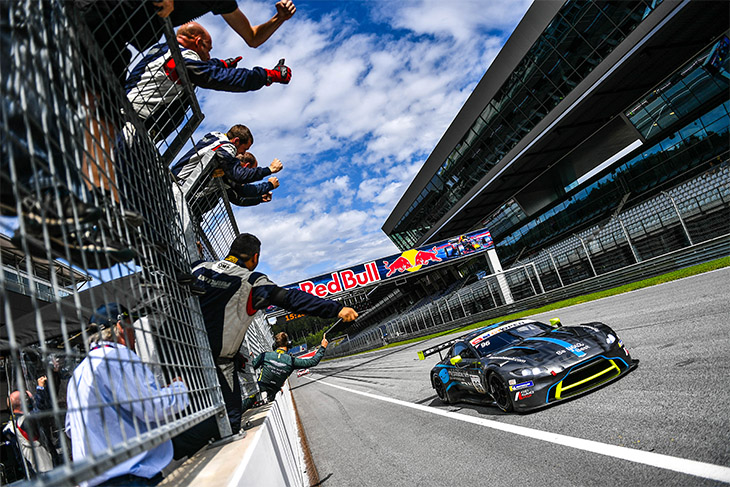 The #17 Teo Martín Motorsport McLaren of Fran Rueda-Andrés Saravia took second today, ahead of the SPS Mercedes of Miguel Ramos-Fabrizio Crestani. The top-5 was completed by the other Teo Martín McLaren of Henrique Chaves and Martin Kodrić (#59) and yesterday’s winners, Albert Costa and Giacomo Altoè in the #63 Emil Frey Huracan. This means that the Kodric and Chaves, and Costa and Altoè are now tied at 70 points at the top of the standings.

In Am, Alexander Hrachowina and Martin Konrad (HTP Mercedes) doubled their fortunes on home soil, beating Giuseppe Cipriani and Davide Roda and further extending their lead in the class.

To win the race Optimum had to push hard. Adam took the start from pole and briefly lost the lead after Chaves found a way past on the opening lap. But the Scotsman fought back and put the #96 Vantage back on top after Chaves made an error and ran wide.

The field then spread out as a battle emerged for third with Onslow-Cole holding off Altoè’s Emil Frey Lambo, Rueda’s #17 McLaren, Khodair’s #16 McLaren and Lisowski’s #77 Olimp Racing Audi.

After the stops, Wilkinson emerged in the lead for Optimum, with a six-second gap over Andres Saravia’s #17 McLaren which vaulted to second from fifth. Onslow-Cole’s teammate Valentin Pierburg remained third with Marcelo Hahn’s #16 McLaren sitting just outside the top three in fourth.

In the final laps, Pierburg had to concede multiple positions, notably from hard-charging Mikael Grenier who climbed up to third in the #14 Emil Frey Lambo before having to retire suddenly in the closing laps.

This left the #10 SPS Mercedes of Miguel Ramos and Fabrizio Crestani to take third, the #59 Teo Martin McLaren to take fourth and the #63 Emil Frey Lamborghini to finish fifth.

Up front there were no changes, Wilkinson managed the gap to Saravia and scored a huge win for the British team.

“I gave it everything, every lap was flat out and the Aston Martin V8 Vantage was amazing to drive,” said Wilkinson after the race.

“I’ve been with Optimum Motorsport since I started racing in 2017 and we’ve been on a massive journey together. This win is a huge boost to everyone involved in the team, particularly after all the hard work over the last three years and with the new car this season.

“To be surrounded by a team who cares so much about me and my career means an enormous amount, I’m very lucky to have such a fantastic group of people behind me. Hopefully, this is just a sign of things to come.”