The #66 JMW Motorsport Ferrari is another car that has appeared (almost) in its special Le Mans livery this weekend (the other being the Kessel Ferraris) and will continue to do so for the remainder of the season.   The Andy Blackmore colour scheme proved to be extremely popular at Le Mans but features a few subtle tweaks for the ELMS – including a spotters guide graphic that substitutes the graphic that featured Le Mans only Rodrigo Baptista for ELMS full-season man Matteo Cressoni. 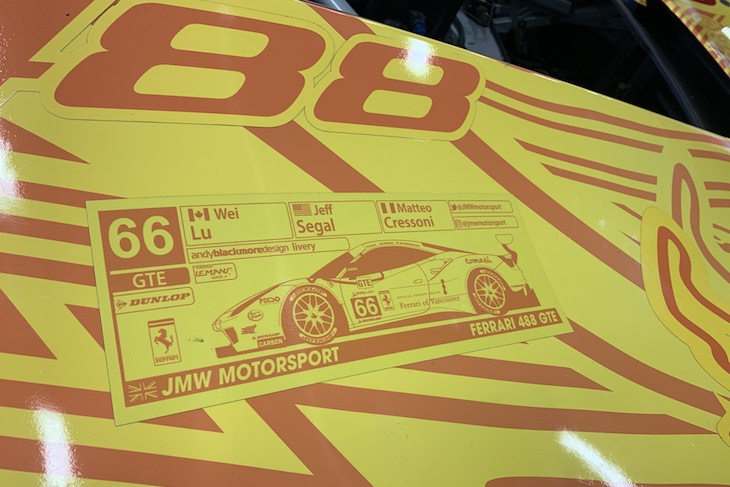 The car also now features the Dunlop logos for the spec-tyred ELMS, the Dunlopian yellow a much better match for the colour scheme than Michelin Blue!

The car does though still feature the dragon graphic produced by Andy’s daughter Ciara. DSC will be funding a legal challenge by Ciara that is designed to deliver royalties per car appearance rather than the clearly unlawful one-off boosted pocket money payment. Beware Andy, we’re coming for you!

Also still on-board the car meanwhile is the vinyl supporting Shabral Pruett on her continuing brave battle with ill-health.

The #27 IDEC Sport Ligier JS217 will not be driven this weekend by its usual line-up which comprises typically of Patrice Lafargue and Eric Maris. IDEC group’s CEO, Patrice Lafargue, officially stepped down for professional reasons. He is replaced in Barcelona by Frenchman Nicolas Minassian. The last time Minassian competed in the ELMS was for the 4 Hours of Spa in 2018 where he was already subbing for Patrice Lafargue. 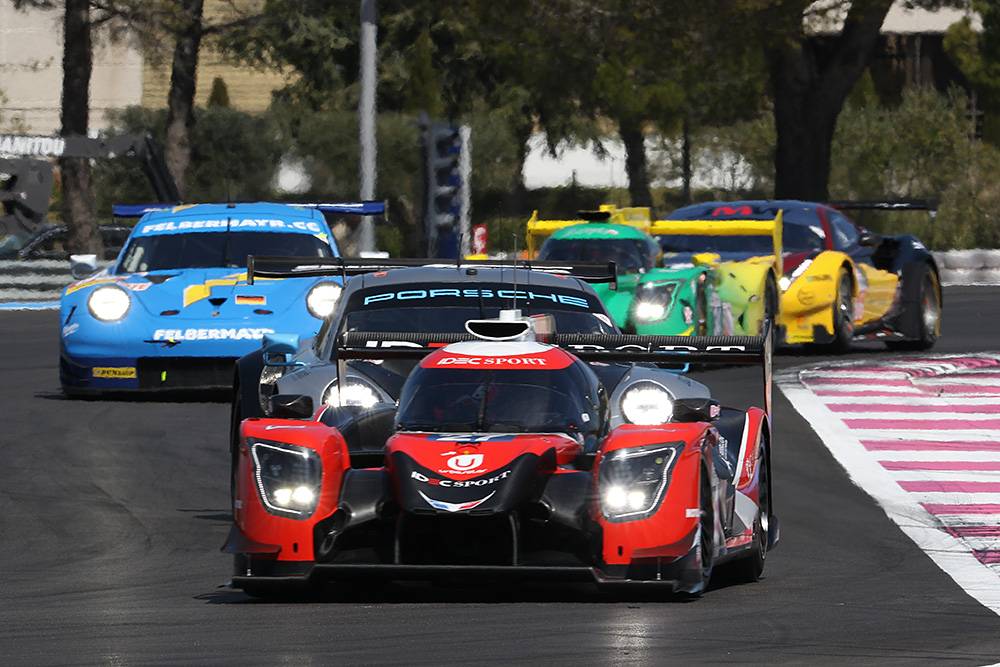 Gentleman driver Eric Maris is replaced by William Cavailhes. “I love that car” said the Frenchman.

“Driving it is a dream come true. I know the track well as I already drove here in LMP2 in 2009 (in the #28 Ibanez Racing Service Courage AER).

“My objectives this weekend are all about making no mistakes. I recall watching Nico (Minassian) on TV, back in the day, so sharing the wheel with him is unreal. What’s great too is that we can leverage his experience to set up the car properly. It’s a real shame though that Patrice is not here (this weekend). Maybe next time.”

German driver Edward-Lewis Brauner is having its first ELMS race this weekend. 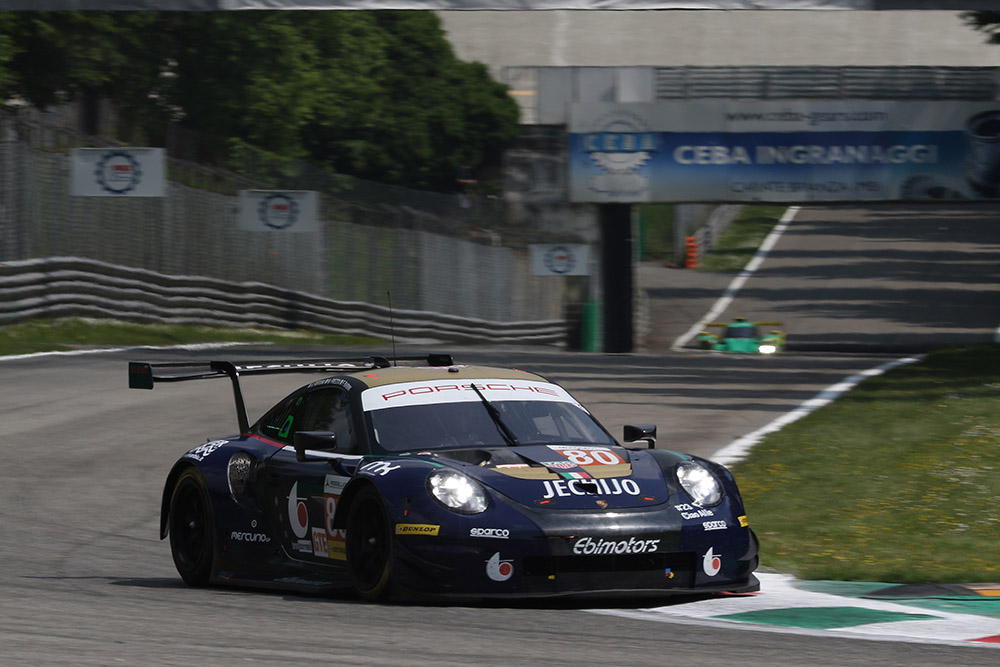 “I have acquired experience in Porsche Cup cars and then went on to race various Ferrari, Porsche and Lamborghini GT3s in Blancpain and Creventic Series.

“Driving these GT3s was really the base of my preparation for this weekend’s race. The 911 RSR is much faster than the GT3s in the corners. I feel I can lean more on the front tyres and have more grip. As an amateur, I can tell you it takes bravery to go up to a speed where you would think your car becomes unstable. This really requires your brain to adapt. The other main difference is around braking: I had no ABS with the Porsche 997 Cup either so my brain still recalls how to manage this.

“Last but not least, the traffic is very different here. You really need to make sure you stay out of the P2’s way and be very cautious by checking your mirrors often”.

Brauner will not attend ELMS’ Silverstone and Spa race weekends due to conflicting racing schedules but may return for the final ELMS round of 2019 at Portimao.

Frenchman Adrien Tambay will have its first race onboard a Le Mans Prototype this weekend, driving Inter Europol’s LMP2 Ligier.

“I tested with ORECA in 2011 before I competed in DTM cars- that’s the only prototype experience I’ve had until now,” he told DSC. “I was a bit anxious before we tested the Ligier last Wednesday. I was expecting a lot of downforce on a very demanding track. It surprised me on my first lap but I felt comfortable soon after. We encountered gearbox issues during the session so I did not cover as many laps as I was hoping for.”

There are no other race plans for Tambay with Inter Europol Competition this season: “This is a one-off but let’s see how this weekend goes. Even though we know ORECAs are ahead, this should be a good track for the Ligier. If we don’t make any mistakes, we should take the checkered flag in a good position.”

DHH getting seat time with Project 1

David Heinemeier Hansson is a notable addition to this weekend’s ELMS grid, the Dane set to race with Project 1 in tomorrow’s four-hour race ahead of making his first WEC appearance with the German team at the Prologue Test next week.

I'm joining @Project1_93 for the 2019/2020 @FIAWEC campaign in that awesome Porsche 911 RSR alongside @EgidioEgidioap and @Cairoli96. But first kicking off the GT cobwebs at the @EuropeanLMS race this weekend in Barcelona with @JBergmeister ✌️ pic.twitter.com/0TU96FKUnp

Tomorrow he will race in Project 1’s 911 RSR with Egidio Perfetti and Jörg Bergmeister.

Another win on the cards for Rich at Barcelona?

RLR Msport LMP3 driver Martin Rich spoke to DSC earlier today and pointed out that he is defending a 100% winning record racing at Barcelona. 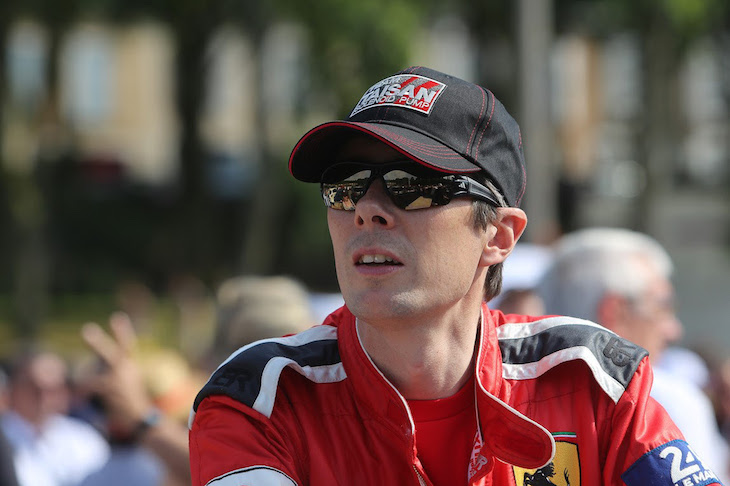 Rich’s only previous start at the Catalan circuit came back in 2006 in the finale of the inaugural International GT Open season in 2006. Back then he drove with Damax in an Ascari with fellow Briton Jonathan Lang and was victorious in the GTS class.

This weekend he will race in RLR’s #15 Ligier JS P3 with his full-season teammates Christian Olsen and Martin Vedel, the trio hopeful of a strong result this time out after a tough start to the season.