Richard Westbrook and Ryan Briscoe in the #67 Ford GT drove through adversity to delivery the first win of the season for the Ford GT at Lime Rock Park. It marked the first win for the #67 Ford crew since Road America last season and ended Porsche’s GTLM five-race win streak.

“[Lime Rock] is just so tough it’s a real bull ring, it’s physical, it’s hard on everyone. We went in with a plan and executed it beautifully,” he added.

His teammate, Westbrook had high praise for the team, saying: “We knew we would be better on newer tyres and the car was just amazing, it really was, we just did everything perfectly. The three-stop strategy worked a treat and I can’t say enough about Chip Ganassi Racing and this Ford GT.”

“I’ve got my dad here, it’s his first race in America so that makes it really special,” he added.

The race proved to be a strategic battle between Ford and Porsche that saw their drivers spat out of pit lane straight into battles for position on more than one occasion. Ford opted for a three-stop strategy, hoping to unleash Westbrook in the #67 Ford GT and Joey Hand in the #66 Ford GT. Porsche chose a two-stop strategy, hoping the soft feet in their all-star line-up could guide them to victory.

After completing their second pitstop, Ford made it clear to Westbrook what he needed to do: hunt down the leading pair of Porsche 911s that were trying to stretch their fuel strategy. Westbrook’s hunt was successful, with just under one hour to run he passed the #912 Porsche for the lead of the race — but it would only be temporary.

Now in the lead of the race, Westbrook needed to create a gap sufficient enough to cover the final pitstop that the #67 Ford still needed to make. With 42-minutes to run and a 44-second lead in hand, Ford called Westbrook into the pits. A small error on the tyre change cost the #67 Ford no more than four seconds, but it meant that Westbrook rejoined the action staring at the back of the Porsche 911s he had already passed once in the race.

After finding a way by the #911 Porsche of Patrick Pilet, Westbrook began to reel in Earl Bamber in the leading #912 Porsche. With under ten minutes to go, Westbrook hung around the outside of Bamber Turn 3 which gave him the optimal line for Turn 4 and completed the job on acceleration out of the corner. Once making that pass Westbrook pulled away, crossing the line 7.003 seconds in front of Bamber who clearly backed off to secure second.

Bamber and Vanthoor, who started the race from pole, still hold onto their championship lead with their second-placed finish. They will leave Lime Rock Park though, knowing Porsche’s win streak could have been extended to six races. They showed all weekend that the car had the pace, but ultimately the strategy didn’t pay off this time.

The #66 Ford GT of Joey Hand and Dirk Mueller ended the race third. They too were challenging the #912 Porsche for the second step on the podium but Hand ran out of time to reel in the Porsche, crossing the line just half a second behind Bamber. The #66 Ford ran the same three-stop strategy as their teammates.

The #911 Porsche of Pilet and Nick Tandy came home in fourth. An error by Pilet that saw him slide into the grass at Turn 1 in the middle portion of the race stunted their progress. Regardless, it seemed Pilet could not find the same pace in his #911 Porsche that Bamber found in the #912 Porsche.

Corvette ended its day with fourth and fifth-place finishes, the #3 Corvette C7.R getting the better of the #4 Corvette C7.R. BMW Team RLL rounded out the GTLM running order with its #25 BMW M8 coming home seventh ahead of the #24 BMW M8 which ended the day as the only GTLM car two laps down.

While much of the attention was on the Ford vs Porsche battle in GTLM, the GT Daytona race went down to the wire too. The battle for victory saw Dennis Olsen in the #9 PFAFF Motorsports Porsche 911 GT3 and Mario Farnbacher in the #86 Meyer Shank Racing Acura NSX GT3 end up in a drag race to the line, with Farnbacher achingly close to making the last-gasp pass for the win. 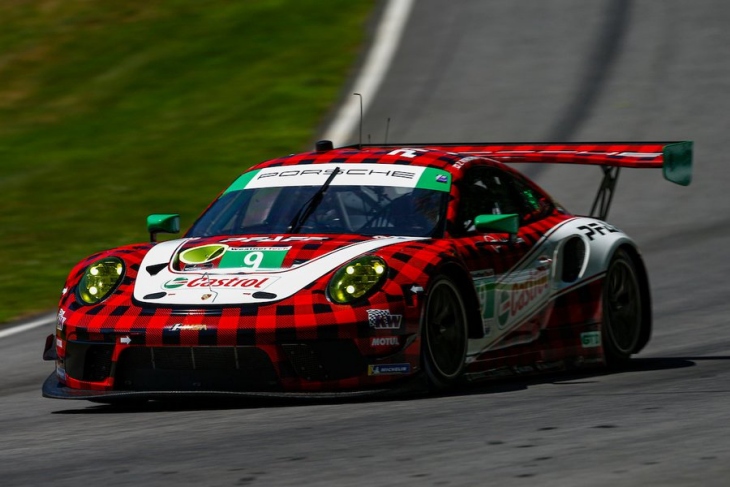 While Farnbacher had led much of the race’s second half, Porsche up-and-comer Olsen showed why the marque has put faith behind him. He passed Farnbacher in the final minutes of the race and held him off on the final lap, delivering the Canadian team its first win in its maiden IMSA season. The margin of victory? Just 0.010 seconds.

Despite the second-place finish, Farnbacher and Hindman extended their championship lead and are in a good position as the season enters the final four races. Their closest championship rivals entering this race, the #12 AIM Vasser Sullivan crew, ended the race last in class, thus they have a thirty point advantage on the next best team.

Rounding out the GTD podium was the #96 Turner Motorsports BMW M6 of Bill Auberlen and Robby Foley. With the disappointing result for the #12 Lexus and this strong showing from Turner Motorsports, Auberlen and Foley have moved into second in the title hunt. They are three points ahead of Frankie Montecalvo and Townsend Bell.

Patrick Long and Marco Seefried came home in fourth in their #73 Park Place Motorsports Porsche, a second ahead of the fifth-placed duo of Matt Campbell and Anthony Imperato of Wright Motorsports.

Another notable finisher was the #11 Magnus Racing Lamborghini of John Potter and Andy Lally. Running the number eleven as a tribute to Apollo 11, they finished the day in eighth. Coincidentally, there is a strong connection between the number eight and eleven in the Apollo space programme. Per NASA policy on astronaut assignments, two members of the crew that flew on Apollo 8, Jim Lovell and William Anders, went on to be the backup crew for Apollo 11.

While a handful of cars including the #33 Riley Mercedes-AMG GT3 and the #57 Meyer Shank Racing Acura NSX had minor spins, the race ended with no Full Course Yellows.

IMSA is back in action on the weekend of August 4 from Road America. DPi and LMP2 will rejoin the action after the first of two GT-only rounds on the IMSA calendar.