Toyota Gazoo Racing’s TS050 HYBRIDs led the way on the opening day of running at the 2019/20 pre-season FIA WEC Prologue test at Barcelona. But the non-hybrid quartet from Rebellion Racing and Team LNT were not far behind.

There were two sessions of running in blistering 30 degree plus heat, and by nightfall, it was Jose Maria Lopez’s 1:29.991 in the #7 during the Morning Session which proved to be the best time of the day.

Kazuki Nakajima set the second-fastest time of the day, a 1:30.114 in the Afternoon Session which was interrupted by a lengthy red-flag period for a disintegrated kerb at Turn 5, which required lengthy repair work by the marshals trackside, and an extension to the session time to accommodate the repairs.

There was another red flag during the day, in the morning, after David Heinemeier Hansson had an off in the #57 Project 1 Porsche.

Behind the Toyotas, the fastest of the non-hybrids was the #1 Rebellion R13 Gibson, a 1:31.073 from Norman Nato, a second off the best time of the day and good enough for third overall in the second session. That time was beaten by the #5 Team LNT Ginetta AER in the hands of Mathias Beche, but the time was disallowed, the Swiss driver improving under double waved yellows.

That meant that the second fastest non-hybrid time of the day went to the second, #3, Rebellion, the car in the hands of Gustavo Menezes with a 1:31.828.

there was much interest in the form of the two Team LNT Ginettas, after a delayed start to the day with scrutineering issues, both G60s shoed that they have pace to play in the LMP1 pack – indeed the G60s best time for each car at the end of Tuesday were all but identical, Beche posting a 1:31.828 in the #5 car, Mike Simpson a 1:31.831 in the evening session in the #6.

In total seven drivers sampled the Ginettas during the day, Ginetta factory men Simpson (#6) and Charlie Robertson (#5) joined by Beche and Stephane Richelmi in the #5 G60, with Guy Smith, Stephane Sarrazin and F2 frontrunner Luca Ghiotto sharing the #6.

Ex-SMP Racing man Egor Orudzhev was present throughout the day but will drive on Wednesday, ex team-mate Sarrazin getting some brief running in the morning to assist the team with set-up, but losing his last, longer planned run to the red flag for the kerbing issue.

Notably too there were a number of representatives of race teams observing progress at Team LNT, together with Ginetta factory engineers the Algarve Pro Racing team were on hand, Sam and Stu Cox’s team staying on after their ELMS run at the weekend, the team providing pit equipment, logistical and pit lane support and running the #5 car.

LMP2 was topped by United Autosports, the now British-flagged team three tenths clear of the field after a 1:33.110 from Paul Di Resta in the afternoon. The Scotsman, driving the team’s brand new Michelin-shod ORECA, was 0.297 faster than newly-signed Toyota reserve driver Thomas Laurent in the Signatech Alpine by the end of the day. The quickest of the Goodyear runners was Racing Team Nederland, which sampled both the Michelin and Goodyear tyres on its new ORECA 07 Gibson. Its fastest time was a 1:34.176 set on Goodyear tyres. The team is due to make a formal decision on its tyre choice for the season ahead of the Afternoon session tomorrow. 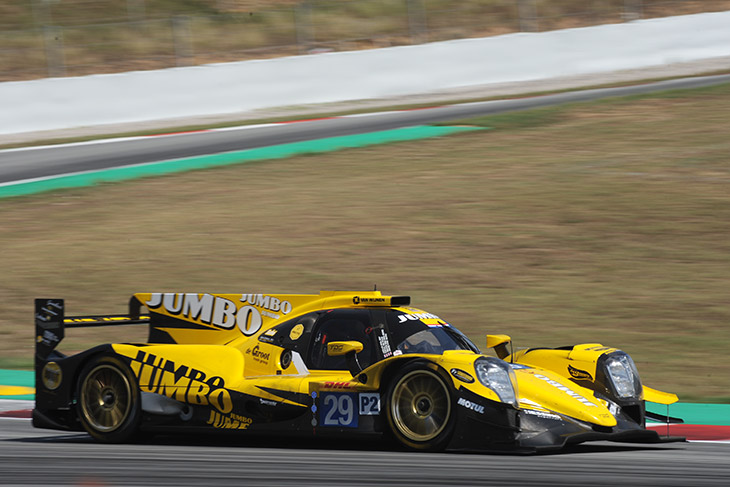 RTN is the only team testing both sets of tyres here in Barcelona, should it opt to run with Goodyear for the season the WEC’s LMP2 class looks set to be a split 50/50 between the two brands. ELMS race winner on Saturday Job van Uitert is set to run for the team on Thursday ahead of planned race appearances in the WEC with RTN at both Silverstone and Shanghai.

Just over a tenth off was Michael Christensen in the brand new #92 Porsche 911 RSR-19. 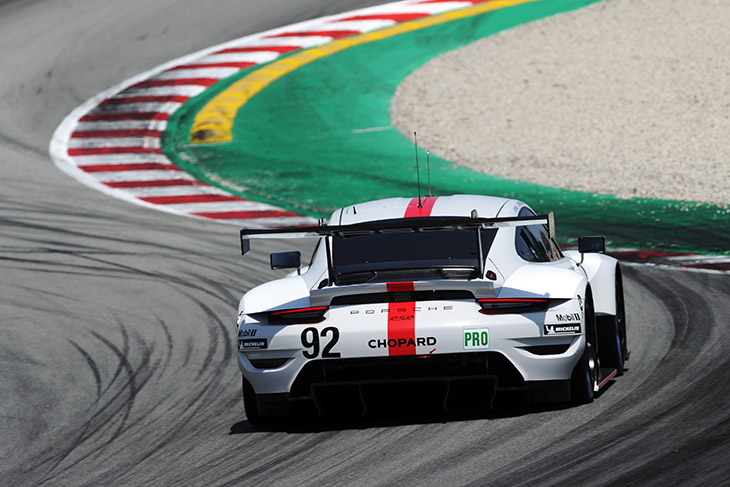 Aston Martin’s best time of the day was set by Marco Sorensen, a 1:45.231, the team clearly not gunning for times with its limited allocation of 2019-spec Michelin tyres.

Maxime Martin and Nicki Thiim also set times in the solo GTE Pro car present for the team, the AMR squad opting to concentrate on one car as the factory works to build up the car replacing the chassis destroyed at Le Mans when Sorensen suffered a brake failure.

Martin, Lynn and Thiim will not drive on Wednesday, all three are on their way to the Spa-Francorchamps for the coming weekend’s 24 Hours.

The best times in GTE Am, as in Pro, were set during the interrupted Afternoon Session. Matteo Cairoli ran fastest in the #57 Project 1 Porsche, 0.032 faster than Jorg Bergmeister in the #56 sister car. 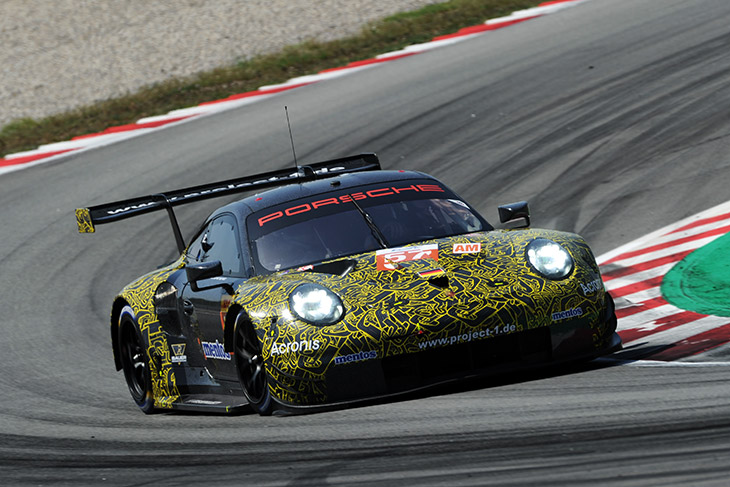 Giancarlo Fisichella ended up fastest of the Ferrari drivers in the #54 AF Corse 488 GTE EVO, while Jonny Adam, the only driver present for the team, turned the best lap in TF Sport’s brand new Aston Martin Vantage AMR (# 90) a 1:46.051, set in the morning, to go fifth in the class.

Track action continues on Wednesday morning from 9:00 am local time for the first of a pair of 4-hour sessions.