The First Hour of the 2019 Spa 24 Hours saw initial dominance from Maro Engel in the #4 Black Falcon AMG clawed back by the drive of the first hour from Kevin Estre in the #20 GPX Racing Porsche who took the lead of the race when Engel pitted with five minutes of the first hour to go, the #4 taking slicks as the track started to dry, but others, including the #998 Rowe Porsche taking new wets.  Götz had been the pathfinder on slicks and produced good lap times instantly.

That prompted Estre to pit at the 58-minute mark for slick Pirellis, Engel back to the lead.  After the race started behind the Safety Car in streaming rain there were early troubles for a number of runners once the field was released.

The #91 Herberth Porsche was dealt a drive-through after opting to miss the driver’s parade for pit stop practice.

Haryanto lost control up through Raidillon, the Audi striking the tyre wall front and rear as it spun back across the track, the rear wing was gone and the front left askew, he got the car moving but finally stopped at Le Combes.  At the same time MacLeod pulled over in the #109 Bentley out of Speakers Corner, the car trailing fluid, MacLeod reporting gearbox issues.

The two incidents prompted the first Full Course Yellow followed by a Safety Car, the Bentley apparently out, the #80 recovered back to the pits.

Before then though both the #9 Bpoutsen Ginion BMW and the #26 Sainteloc Audi had pitted – the BMW would emerge, the Audi clearly in real trouble.

After 8 minutes under caution, the field was released and Estre’s charge to the front resumed, he’d made it to fifth from 10th before the FCY.

Miguel Molina meanwhile was heading in the opposite direction through the top 10, as Rast (#1 Audi), Estre, Stippler (#2 Audi and Schothorst (#55 Audi) all passed the #72 SMP racing Ferrari.

Under the Safety car two other car pitted with troubles, the #59 Garage 59 Aston Martin eventually another early retirement with a broken right front hub.

The #35 Nissan was wheeled into the garage too for a lengthy stop after Katsumasa Chiyo had started the race in the car. 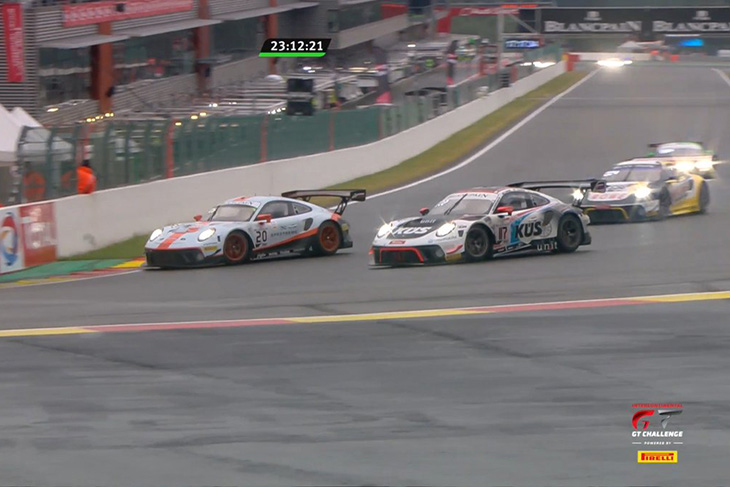 With the top of the hour looming Estre passed first Rast – after a great battle, then closed in rapidly on the #998 Rowe Porsche of Fred Makowiecki and #117 Kus TeamBernhard Porsche of Earl Bamber for second before closing right onto the rear of Engel from an initial 5-second gap.