The 10th hour of the 2019 Spa 24 Hours opened with Maro Engel (#4 Mercedes, above) holding a 38-second lead over Nick Tandy (#998 Porsche), with only a handful of seconds covering second to sixth places still. 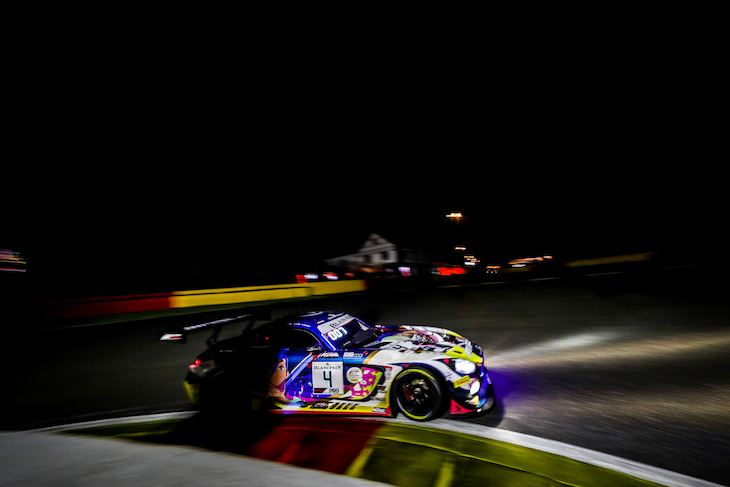 Mirko Bortolotti, Frank Stippler Markus Winkelhock and Max Goetz were running third to sixth in the #63 Lamborghini, #2 Audi, #25 Audi and #999 Mercedes respectively. Erstwhile leader Davide Rigon was running seventh, a little way down the road, in the #72 Ferrari. 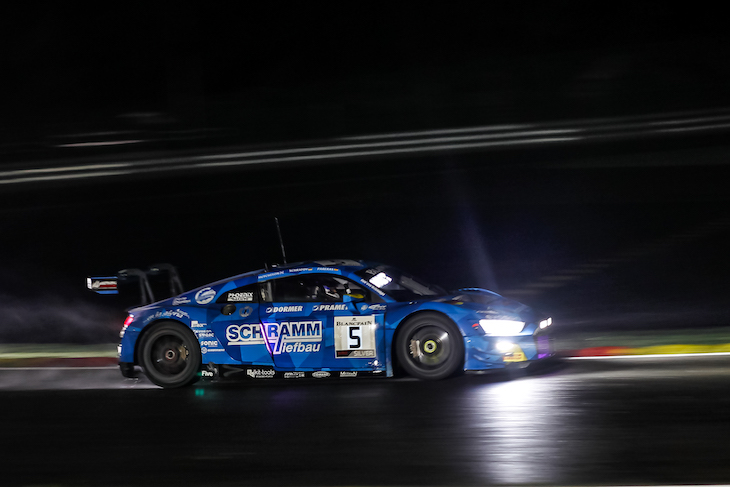 The top three Silver Cup entrants were well spread out across the overall top 25, with the #5 Phoenix Audi (above) 14th overall, the #90 AKKA-ASP Mercedes 21st overall and the #78 Barwell Lamborghini 24th overall.

The earlier battle for the Pro-Am class lead between the #97 TF Sport Oman Racing Aston and #74 Ram Racing Mercedes had been at least temporarily resolved in favour of the former car and they were now running 29th and 31st overall.

Finally, Richard Abra was on board the Am class-leading #77 Barwell Lamborghini, with Top Gear’s Chris Harris at the tiller of the #188 Garage 59 Aston Martin (below), second in the class. 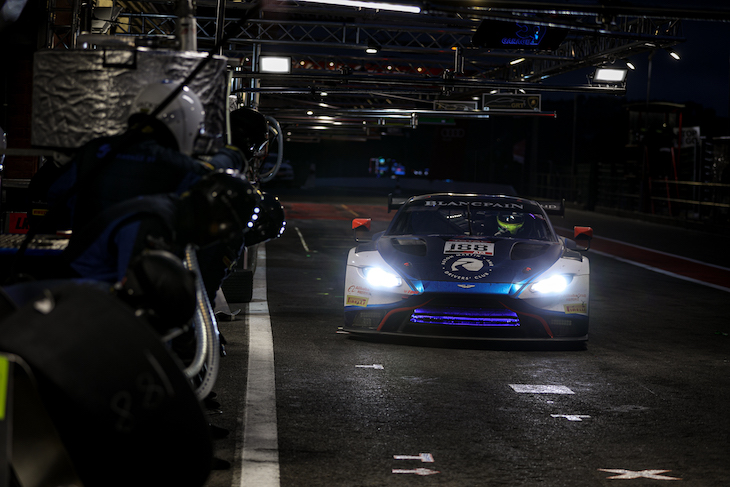 Bentley’s disappointing Spa 24 received another setback early in Hour 10 when the #107 was hit with a drive-through penalty for causing a collision, while just outside the top 10, Dennis Olsen in the #99 Rowe Porsche was putting in a pioneering run on slick tyres, lapping faster than most of the rest of the field, which remained on wets.

A full course yellow was called just after 2 am when the #52 Pro-Am Ferrari, in the hands of Toni Vilander, spun at Les Combes after suffering a puncture. Maro Engel stayed aboard the leading #4 Mercedes during another round of pitstops, while recovery vehicles had to be despatched to move the stricken Ferrari from its position. Before the FCY was called, the #30 Motul NSX had begun its mandatory technical pitstop, and once complete it temporarily dropping it to just outside the top 20.

Elsewhere, Alex Lynn spoke in the pits about his stint and explained the issue that had scuppered the sole remaining R-Motorsport Aston Martin’s charge: a Pirelli rear tyre mistakenly mounted on a front rim. “The car was flying and I was having a lot of fun,” said Lynn. “So it hurts a lot to lose 90 seconds. I was dicing with two Audis, we were fighting like dogs, and I managed to pass both of them on the dry line. There was a lot of cool driving and a lot of respect out there.”

The safety car was despatched to conclude the FCY procedure 10 minutes before the 11-hour mark, with leader Engel now having a full train of eager challengers on his tail. No sooner had they resumed racing, however, than it was FCY time again, this time for Alessandro Pier Guidi in the #51 Ferrari, which hit the tyres at Blanchimont, going in backwards. 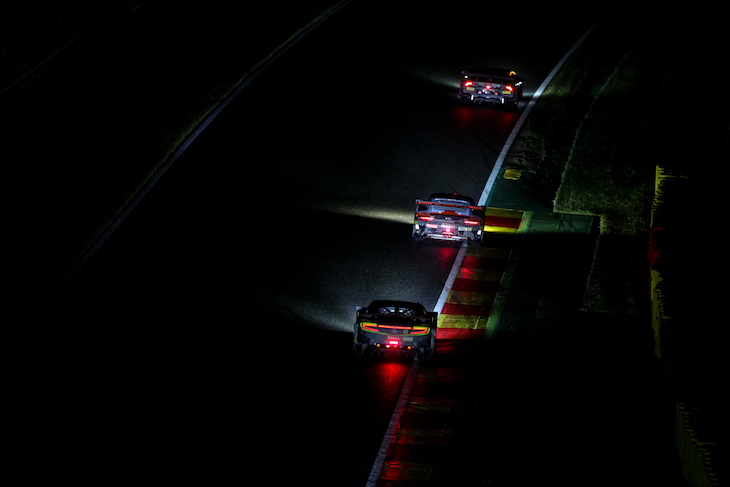 As the safety car was deployed once again to gather up the field for the return to green, rain appeared to be falling in the pitlane, but it didn’t become heavy enough for a mass switch to wets. The presence of lapped cars in the safety-car train meant Engel had almost a 13-second lead on second-place Bortolotti as the clock headed towards 3 am local time in Belgium.

The battle for the top 10 positions behind the leading Mercedes continued to rage, with Tandy getting from fifth to fourth ahead of Vincent Abril just after 3 am, while Bortolotti and Goetz made routine stops, as did the leader Engel, who handed the car over to Luca Stolz. Those stops elevate the out-of-sequence Tandy to the lead in the #998 Rowe Porsche.

In the class battles, Nicki Thiim and Remon Vos respectively had got aboard the leading and second-place Pro-Am cars (the #97 Aston and #74 Mercedes), while third in this category continued to be held by David Fumanelli in the #43 Strakka Mercedes.

Approaching the start of the race’s 12th hour, another FCY was called, this time for the #00 Goodsmile & Type-Moon Mercedes, which had found the barrier at Blanchimont in approximately the same position as the #51 Ferrari earlier, with Tatsuya Kataoka driving. This coincided with an intensification of the rain, and some unscheduled pitstops to fit wets.

Having surrendered the #998 Porsche to co-driver Fred Makowiecki, Nick Tandy reported: “It’s horrendous. We can’t afford to drop a lap, so we’re trying to stay on track on slicks in the wet, trying to limit the risk, but we’ve got to stay on it too. We managed to get our lap back when the rain started a few hours ago.”

Approaching 4 am local time, the safety car came out, seemingly to bring the FCY period for the recovery of the Goodsmile Mercedes to an end. But with no sign of a let-up in the rain, and reports of standing water on track from multiple drivers led to suggestions that a red flag may be the safest course of action.

The restart was nonetheless estimated for 4:15 am, and it proceeded as planned.