Into hour-seven and the rain was getting much heavier, making an impact on the pace, in particular on the pace of those trying to get to their pit stop window, staying out on slicks.

That included race leader Mikhail Aleshin in the #72 SMP Racing Ferrari who was losing time hand over fist to the chasing #63 GRT Lamborghini of Christian Engelhart. The Ferrari staying out beyond the point where Blancpain Endurance points were awarded before pitting 5 minutes into the hour.

Engelhart went to the lead, but he though was being caught too, this time by Yelmer Buurman in the #4 Black Falcon AMG, both men pitting on the lap after the Ferrari allowing Fabian Schiller to lead the race in the #88 AKKA ASP AMG for a single lap before he too pitted for wets, Mario Farnbacher another late stopper for wets, the #30 Honda Team Motul NSX GT3 Evo up to third overall before heading to pitlane.

That left a pair of Audis, the #1 WRT R8 LMS of Rene Rast and the #25 Sainteloc car of Frederic Vervisch – the pair 22 seconds apart with battles galore behind in the darkness and rain.

Maxi Götz was third in the #999 Mann Filters AMG ahead of a battle royale between Engelhart and Buurman with Jake Dennis in the surviving #76 R-Motorsport Aston Martin closing in too. 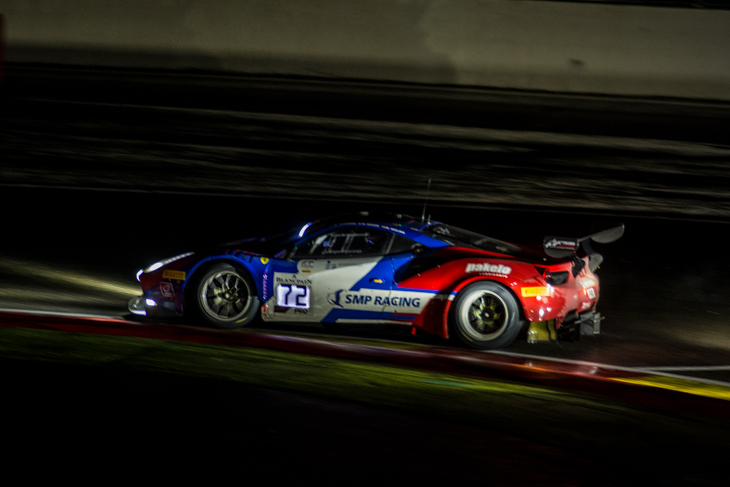 In Silver Cup and Pro-Am possibly the two standout performances of the whole race continued, The Silver Cup-leading #55 Attempto Racing Audi running in a real-world ninth overall as the clock ticked by 11 pm, and Nicki Thiim running in 17th for the #97 Oman Racing by TF Sport Aston Martin squad, this the car that started stone last after the team had to change cars earlier in the week.

The #80 Audi, after losing a lot of time early on in the pits following a big off at Raidillon for Andrew Haryanto was in trouble again, running slow on course. The #129 Montaplast by Land Audi, running in 18th, got its second drive-through of the race thus far for a driving stint infringement.

The battle for third was well alight as the next hour approached, Engelhart, passing Götz with Buurman and Dennis closing in fast too. The #4 AMG would grab fourth before the hour was up, Jake Dennis through and past the #999 AMG bang on the hour.

The #88 AKKA ASP AMG went missing out on track on the hour, the car dropping from its top ten position, plummeting down the order, eventually pitting having lost a full minute and a half on its in-lap.

Into another pit stop cycle, but on the road Kevin Estre’s charge back up the order continued, passing the Motul Honda of Bertrand Baguette for 7th.

Fred Vervisch led as others pitted around him but was almost immediately dealt a drive-through penalty for a pit stop infringement, which was quickly suspended, then just as quickly imposed once again.   After a stellar run, the #55 Attempto Audi stopped on track and was under tow, the Silver Cup lead taken on by the #5 Phoenix Audi, running 15th overall.

Pitstops, again and now it was Michael Christensen’s turn to take the lead, the GPX Racing Porsche to the fore, on a different strategy to the remainder of the leading pack formed, as hour nine beckoned as follows:

The #6 Black Falcon AMG was the first significant runner to take its five-minute ‘technical’ stop: a full brake change and a varied job list of reactive and preventative measures squeezed in, the car dropping from second to fourth in Silver Cup before being despatched again.

Ryan Ratcliffe is reported as having suffered a concussion and has been taken to a local hospital after the huge impact for the Team Parker Racing Bentley earlier.   The presence of Ryan at next weekend’s British GT race at Brands Hatch is therefore in at least some doubt. The car, heavily damaged in the accident, is not the car used for the British championship by the team, however.

Christensen’s routine stop at the top of the hour saw Maro Engel back to the lead in the #4 AMG, 39 seconds up on the chasing #63 Lamborghini, Mirko Bortolotti fending off Alex Lynn in the #76 Aston Martin until a fumble saw the Brit cede a pair of places to the #2 and #25 Audis.

Another Aston Martin was under pressure too as Charlie Eastwood in the #97 was fighting off the close attentions of Tom Onslow Cole in the #74 RAM Racing AMG for the lead of Pro-Am, the pair in 32nd and 33rd positions overall as 1 am approached.

Alex Lynn pulls off an edgy but brilliant double pass to retake both Audis for third.

Patrick Pilet meanwhile was up to 6th in the #998 Rowe Porsche ahead of Buhk’s #999 Mann Filter AMG, then took fifth passing Winkelhock.

Engel pitted from the lead to have slicks replaced by wets on the #4 AMG, the rain continuing at a moderate but persistent level.

The #333 Rinaldi Ferrari looks done – engine cover off in the garage and a distinct lack of interest being shown. Patrick Pilet takes a turn in leading the race as he closes in on a pit stop aboard the #998 Rowe Porsche.

At the top of the racing hour, the #998 pitted from the lead, Nick Tandy climbing aboard, Davide Rigon climbing aboard the #72 Ferrari from second. Maro Engel back to the lead once again (top).

The #91 Herberth Porsche, running fourth in Pro-Am, pitted with the bonnet up and obscuring the screen, as the #76 Aston Martin pitted to take its five-minute technical stop, however, a tyre issue saw it make further stops and thus drop out of top 10 contention.

Pierre Ehret completed the hour with a spin at Campus, leaving the #488 Rinaldi Ferrari broadside across the track, getting it back on track after several narrow squeaks from passing cars, including a particularly close call with Davide Rigon in the #72.