On Saturday morning, four-time GT500 Drivers’ Champion and NISMO legend Ronnie Quintarelli celebrated his 40th birthday a week early. Typically, any elite athlete lucky enough to compete until age 40 will soon see a sharp decline – even in a sport like motor racing, where the fields of play are becoming younger and younger every day.

But don’t tell that to “Ronnie Quattro” – who demonstrated during qualifying for the Fuji GT 500 Mile Race that he’s still at the top of his game.

Alongside them on the front row will be the #3 CraftSports Motul GT-R of Kohei Hirate, and Frédéric Makowiecki, just a week removed from a runner-up finish in the Total 24 Hours of Spa-Francorchamps. 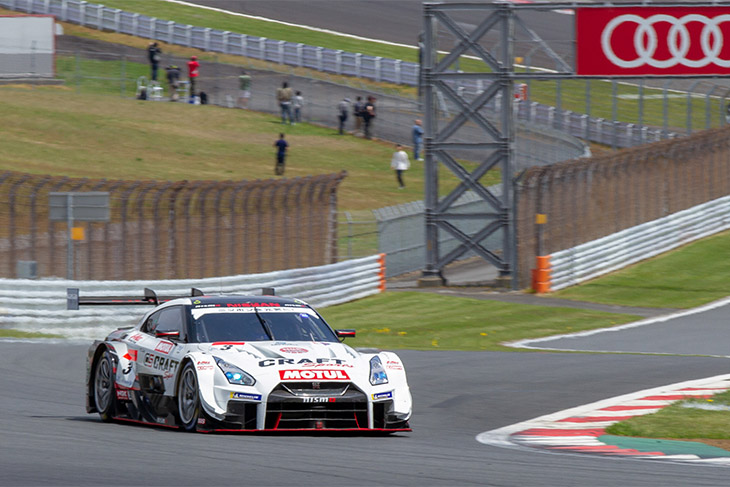 Indeed, the two Michelin-clad Nissan GT-Rs, the only two Michelin runners in the field, finished 1st and 2nd in both phases of knockout qualifying. Matsuda, who just turned 40 in June, showed that he still has the pace in his own right by leading Q1 with a best lap of 1’28.904 – just 0.038 tenths up on Makowiecki’s best time in the “White Car”.

Q1 was also a difficult trek for the top two teams in the championship: The #6 Wako’s 4CR Lexus LC500 (Kazuya Oshima/Kenta Yamashita) and the #37 KeePer TOM’s LC500 (Ryo Hirakawa/Nick Cassidy) both missed out on Q2, qualifying 11th and 14th respectively. Both cars battled through heavy Success Ballast – including the “Level 2” fuel-flow restrictors that hampered them in the horsepower department.

In Q2, there was big drama with two minutes left! Quintarelli crossed the line with his best lap of 1’28.519. Next across the control line was the #17 Keihin NSX-GT of Koudai Tsukakoshi. Tsukakoshi jumped to second, two-tenths off of Quintarelli’s marker. But as the Japanese veteran stabbed the brakes going into TGR Corner (Turn 1), the car suffered a brake failure and spun port-side into the armco barriers.

Tsukakoshi was uninjured, but his and Bertrand Baguette’s Keihin NSX was heavily damaged from the impact. Adding insult to vehicular injury, their crash necessitated a red flag that ended the session, and their best lap was removed – so Tsukakoshi and Baguette will start P8 tomorrow.

Quintarelli’s best lap remained unchallenged then, and the Italian wrapped up his 14th career pole position, while Hirate followed up his teammate Makowiecki’s performance by putting in a 1’28.649 just before the session was stopped.

“I owe this pole position to the car, the tires and the team,” said Quintarelli. “The conditions for us were very bad at Suzuka and Buriram and we finished out of the points, so we want to win back the points we lost then here at Fuji. I want to take this pole position and turn it into a good result in tomorrow’s race.” 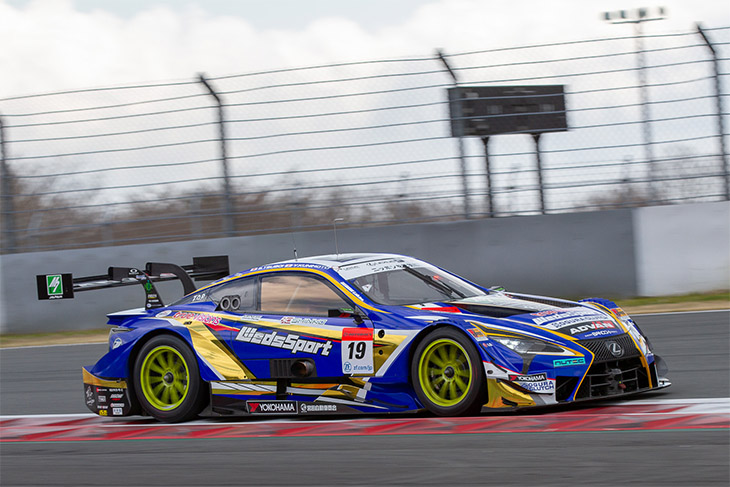 With the Keihin NSX’s best lap removed, the #19 WedsSport Advan LC500 (Yuji Kunimoto/Sho Tsuboi) moves up on the grid with a third-place qualifying effort, the best of the Lexus/Toyota fleet at their home ground of Fuji Speedway. Fuji 500km winners Yuji Tachikawa and Hiroaki Ishiura start fourth in pursuit of a season sweep of the Fuji Speedway rounds, and the #36 au TOM’s LC500 of World Endurance Drivers’ Champion Kazuki Nakajima and Yuhi Sekiguchi starts fifth. 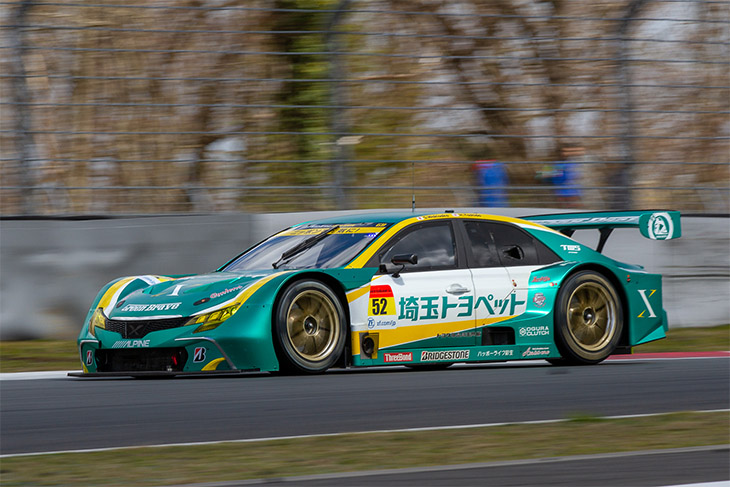 Wakisaka, the younger cousin of three-time GT500 Drivers’ Champion Juichi, just narrowly avoided elimination by finishing 16th in Q1 as the last car to advance on to Q2, while the #56 Realize/Nissan Gakuen GT-R of Kazuki Hiramine led Q1.

Among those who missed the cut to move on to Q2 were the Fuji 500km winning #11 Gainer TanaX GT-R (Katsuyuki Hiranaka/Hironobu Yasuda) in 20th and the two-time race winners in 2019, the #96 K-Tunes Lexus RC F GT3 (Morio Nitta/Sena Sakaguchi) in 25th. The best from the returning two-time GT300 vice champion Björn Wirdheim still wasn’t enough to advance, as Wirdheim and co-drivers Hisashi Wada and Masaki “Guts” Jyonai will start 28th in their #22 R’Qs Mercedes-AMG GT3.

Practice and Q1 indicated that Q2 would be yet another Nissan GT-R NISMO GT3 benefit at Fuji, but it became apparent that the JAF-GT Mother Chassis runners wouldn’t lie down! Yoshida took the GreenBrave Mark X to provisional P1 with a best time of 1’37.320, then on his final lap, he improved another 0.004 seconds to a 1’37.316. And with that, in their first year with Bridgestone tyres, Saitama Toyopet GreenBrave – whose team is staffed by service mechanics from Toyopet dealerships across Japan – took their first Super GT pole position.

“I am tremendously happy,” said Yoshida. “The fact is, going into Q1 we had considerable trouble and we thought it would be difficult to qualify to Q2, but Shigekazu-san did a great job to get us through. So, I just want to thank the team that fixed everything before Q2 for me, and Shigekazu-san.”

The 35-year-old journeyman Yoshida, who was a Bronze-rated driver until this season, finally breaks through to his first career pole position in Super GT, one that would make his mentor Naoki Hattori proud, and to do so in the longest race of the season as well! 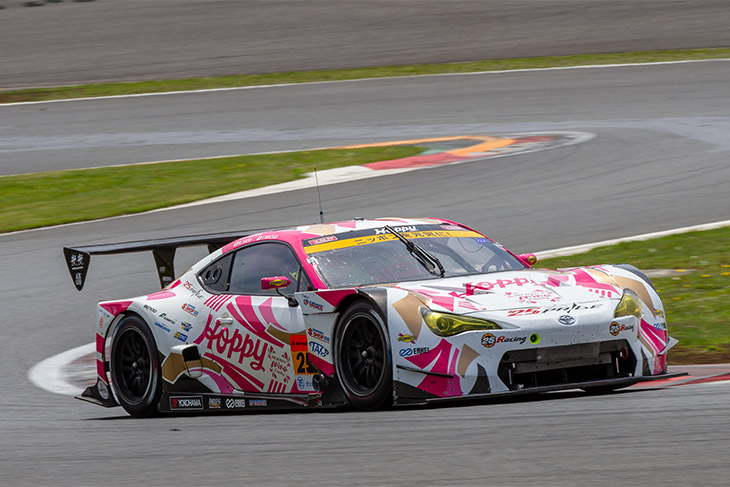 As expected, the Nissan GT-Rs did shine in Q2 with four of them inside the top eight, but it wasn’t either of the race-winning Gainer entries, nor the impressive first-year GT300 effort from Kondo Racing that led the way! 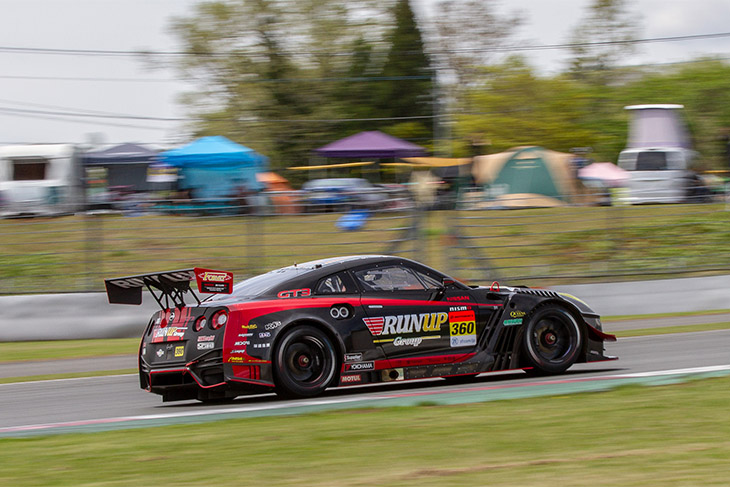 The #360 RunUp Rivaux GT-R (Takayuki Aoki/Atsushi Tanaka/Yusaku Shibata) once again put in an incredible qualifying display that has Tomei Sports dreaming of a breakthrough top ten finish, their first since returning to Super GT in 2007, tomorrow. Former GT300 champion Aoki was 2nd in Q1, and gymkhana legend Shibata was an even more impressive 3rd in Q2, qualifying ahead of the #61 Subaru BRZ R&D Sport (Takuto Iguchi/Hideki Yamauchi) in fourth.

Buriram winners Kazuki Hoshino and Keishi Ishikawa start 5th in the #10 Gainer TanaX triple a GT-R, next to the #56 Realize/Nissan Gakuen GT-R, which qualified only sixth as rookie Sacha Fenestraz bid for his first career pole. The #33 EVA Racing X Works GT-R (Marchy Lee/Shawn Thong/Shinya Sean Michimi) qualified a very impressive 7th, ahead of the #34 Modulo Kenwood NSX GT3 (Ryo Michigami/Hiroki Otsu) – which missed this race a year ago due to a practice crash – in 8th.