Graham Davidson and Johnny Adam have taken a commanding British GT victory in the championship’s penultimate round at Brands Hatch, setting up a tantalising three-way fight for the title going into the season finale at Donington Park next month.

In GT4, after a run of cruel luck, Tolman Motorsport’s #4 crew of Josh Smith and James Dorlin finally took a class win, ahead of the #57 HHC McLaren and championship-leading #15 Multimatic Mustang.

Barrier repairs due to an earlier Volkswagen Cup incident meant the race got underway five minutes later than its scheduled time, at 1:05 pm in cloudy but warm conditions at the Kent venue.

The rolling start saw #96 Optimum Motorsport Aston man Ollie Wilkinson muscle his way into the lead from his starting position of second. Davidson was also on form at the start, so when they came around after the first flying lap, it was the #96 and #47 Astons in first and second, with polesitter Shaun Balfe third in the #22 McLaren.

Balfe moved to retake second on the second lap, but himself came under attack from Angus Fender, who was making an impressive showing on his GT3 race debut in the #9 Century BMW. Further back, Ian Loggie in the Ram Mercedes was attacking Sam de Haan in the #69 Lamborghini for fifth.

The GT3 runners began encountering GT4 traffic by lap nine, shortly after which point Dominic Paul in the #3 Century BMW got past Loggie for sixth; Loggie lost another place to Rick Parfitt’s JRM Bentley next time around, putting him down to eighth.

The Safety Car came out on lap 13 when Glynn Geddie in the #7 Team Parker Bentley tagged the #61 Academy Motorsport Aston Martin of Ben Hurst while lapping it, leading to a big shunt at Westfields. Geddie walked away, but the car’s race was run.

Just before the Safety Car period, Wilkinson had spun out of the lead going through Paddock Hill Bend but managed to get going again having dropped to fourth. No big gaps had been established at the front before the Safety Car was deployed; the order behind it as Geddie’s car was recovered was Davidson from Balfe and Fender, with Wilkinson, de Haan, Paul, Parfitt and Loggie running fourth to eighth, followed by Adam Balon in the #72 Lamborghini and Richard Neary in the Abba Mercedes to complete the top 10.

The Safety Car came in at the end of lap 21, about 40 minutes into the race, and the leading trio quickly established a gap to the rest of the field. In the chasing pack, Parfitt got ahead of Paul for sixth, but Paul subsequently went off into the gravel at Clearways, leaving Balon, Neary and Loggie to battle over seventh. Loggie then had an off at Paddock Hill, dropping him to the back of the GT3 pack.

Upfront, Davidson had got his head down and pulled out a gap of around three seconds, but there was no separating Balfe and Fender, practically glued together in second and third. In the chasing pack, Parfitt spun and recovered on the run down to Graham Hill Bend while battling with Balon and Neary just before the GT3 pit window opened.

Another Safety Car was called while the pitstops were ongoing, to allow for some debris to be collected from the straight between Stirlings and Clearways. With the Pro drivers now having got on board, Adam led from Rob Bell in the Balfe car and Jack Mitchell in the Century BMW, with Barwell team-mates (and championship rivals) Jonny Cocker and Phil Keen in fourth and fifth. Valentin Hasse-Clot was sixth aboard the Beechdean Aston, ahead of Dennis Lind in the WPI Lamborghini and Tom Onslow-Cole in the Abba Mercedes.

A 20-second pitstop penalty following the car’s Spa win saw Bradley Ellis down in ninth after the stops in the Optimum Aston, while the Beechdean Aston was promptly called in for a three-second penalty for a short pitstop.

Ellis appeared to be battling a car issue and was passed by both Seb Morris in the JRM Bentley and Calum Macleod in the Ram Mercedes during his stint, winding up 11th at the flag. Nonetheless, combined with the Team Parker Bentley’s non-score, this means Wilkinson and Ellis’ Silver Cup points lead is now unassailable, so the duo have wrapped up the category’s 2019 title.

Upfront, Jonny Adam had pace to spare and was able to build a gap on Bell, whose McLaren had some loose bodywork over the left rear wheel for the majority of the stint. He also had Angus Fender’s co-driver Jack Mitchell on his tail in the Century BMW, but managed to defend to the flag, taking another podium to consolidate Balfe’s very strong second half of the season.

Mitchell and Fender hung on for a very welcome podium after what’s been a tough GT3 campaign thus far for the Century BMW crews, not to mention an extremely impressive debut GT3 result for Fender, who only moved up to GT4 from Ginettas at the start of this season.

Adam and Davidson’s win vaulted them right into contention for the driver’s title heading into Donington, but more dramatic implications would arise from the battle for fourth between Barwell’s Cocker and Keen, whose pace meant they were catching Mitchell in third as well as keeping each other honest as the race clock wound down.

Things came to a head on the final lap, when Keen went around the outside of Cocker in a dramatic move on the way into Hawthorns. That forced Cocker to adjust his line slightly on the way into the corner, losing momentum, and he was almost immediately swallowed up by the chasing cars. He dropped from fourth to eighth by the flag, behind Keen, Lind, Onslow-Cole and Nicki Thiim in the #2 TF Sport Aston Martin.

“Customer racing is not like factory racing, you can’t intervene,” said Barwell team director Mark Lemmer afterwards. “Phil went around the outside of Jonny and Jonny ended up compromised. He wasn’t happy, but they’ve shaken hands now and we’ll move on from it.”

The result sees the championship lead revert to Keen and Balon in the #72 ahead of September’s ‘Donington Decider’. The pair now have 122 points to Adam and Davidson’s 116, with Cocker and de Haan in third on 110.5. 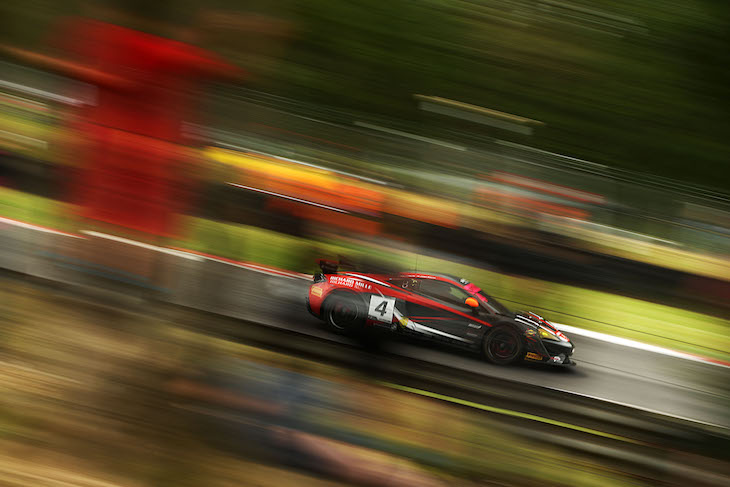 Few would begrudge Josh Smith and James Dorlin their Brands Hatch GT4 victory in the #4 Tolman McLaren, after they’d missed out on strong results due to bad luck several times already this season.

But the win initially seemed to be going the way of the #62 Academy Motorsport Aston, which had been pitted by Alex Toth-Jones from seventh position after the opening stint, during which it had taken a stop-go penalty for a start-procedure infringement.

The opening half of the race had seen Ash Hand in the front-row starting #97 TF Sport Aston lead from Smith in the #4, ahead of Callum Pointon in the polesitting #57 McLaren. Scott Maxwell, meanwhile, had vaulted from his starting position of 10th to fourth after the opening laps in the championship-leading #15 Multimatic Mustang.

The second Safety Car coincided with the GT4 pit window, and the #62 was the last car to enter the pits before the boards went out, so Will Moore found himself at the head of the field when the order shook out and the track went back to green. Second was Dorlin, ahead of Pointon’s co-driver Dean MacDonald and Maxwell’s team-mate Seb Priaulx.

It was all going swimmingly for Moore, until he lost the back end and crashed at Druids while being lapped by the fast-moving Barwell Lamborghini train. That elevated Dorlin to the lead, with MacDonald and Priaulx completing the podium.

With Tom Canning bringing the #97 Aston across the line fourth, the result sees Maxwell and Priaulx head to the Donington finale with 125 points to Hand and Canning’s 113 and MacDonald and Pointon’s 109.

Century Motorsport team boss Nathan Freke brought the #43 BMW M4 that had been started by Andrew Gordon-Colebrooke across the line in fifth. 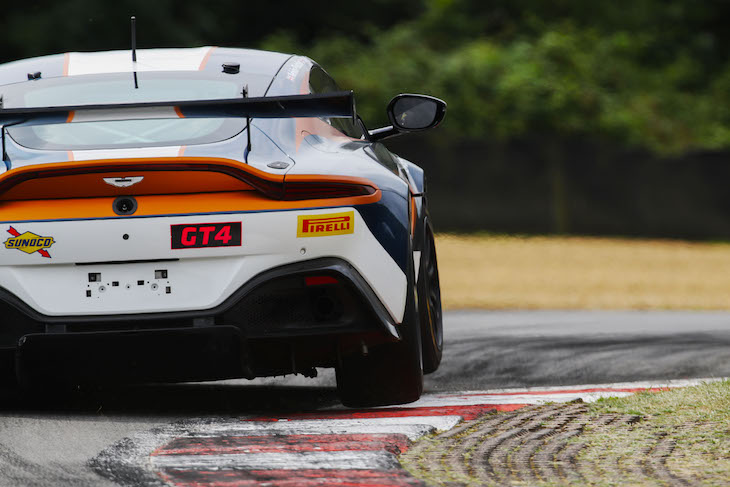 Pro-Am victory went the way of Kelvin Fletcher and Martin Plowman in the #11 Beechdean Aston. They finished sixth overall in GT4, ahead of the second Pro-Am car across the line, the Fox Motorsport Mercedes of Mark Murfitt and Michael Broadhurst.

Third in Pro-Am was held in the closing stages by the Graham Johnson/Michael O’Brien Balfe McLaren until an electrical fault forced O’Brien to pit in the closing stages. The position instead went to this round’s #19 Multimatic Mustang guest drivers, Richard Meaden and Jack Roush Jr.

STOP PRESS: A post-race penalty for infringing pitlane safety regulations was applied to both the #35 Optimum Motorsport Aston Martin and the formerly championship-leading #15 Multimatic Mustang, both having 40 seconds added to their race time. It drops the Mustang to ninth overall in GT4 in the final result and means that Hand and Canning now lead the points heading to Donington, with 117.5 points.

MacDonald and Pointon are second on 109, while Priaulx and Maxwell are now third on 105.5. The two Tolman McLaren crews, as well as Pro-Am pairing Fletcher and Plowman, are also in mathematical contention for the overall GT4 drivers’ title ahead of Donington.