Blancpain GT World Challenge Asia headed to Korea last weekend for a pair of races at the Korea International Circuit. There, Indigo Racing and Panther/AAS Motorsport emerged victorious from the two races.

The season is beginning to wind down now, with just one more race weekend in Shanghai next month left on the schedule. The GT4 title was settled in Korea, but the GT3 championship will go down to the final weekend in China.

MG Choi and Manuel Metzger scored a home win for Solite Indigo Racing on Saturday, where their Mercedes-AMG headed a Race 1 top-four comprising as many different manufacturers. 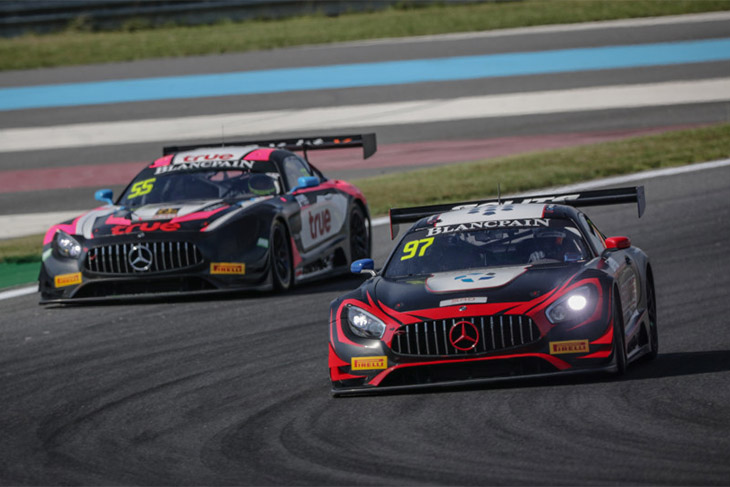 Metzger passed Philip Hamprecht early in the second stint to help his co-driver Choi return to the top of the Drivers’ standings. Hamprecht and his Absolute Racing partner Tanart Sathienthirakul slipped four points behind the Korean after finishing third, while HubAuto Corsa’s Yuya Sakamoto also remains firmly in title contention thanks to his new co-driver Marcos Gomes who snatched second from the Porsche late on.

Nevertheless, Hamprecht and Sathienthirakul’s podium plus fifth place for Yuan Bo and Leo Ye Hongli was enough for Absolute Racing to seal 2019’s Teams’ title with three races to spare.

Indigo’s Mercedes-AMG started on pole but this was no lights-to-flag cruise for MG Choi and Manuel Metzger who were made to work for their third victory of the season.

Choi’s start was clean enough before he was overhauled on the run to Turn 4 by Tanart Sathienthirakul, who was followed through by Yuya Sakamoto. The Porsche, Ferrari and Mercedes-AMG then circulated together for the rest of the opening stint after dropping Audi Sport Asia Team TSRT’s David Chen.

There was never more than two seconds between the three championship protagonists who came into the weekend separated by 14 points. Pitstops looked the most likely chance to switch the order, but when the driver changes shook out it was still Philip Hamprecht out front from Metzger.

The German quickly closed in on his compatriot and, as they came up to the GT4 leader, took advantage of Hamprecht being baulked. Indigo’s Mercedes-AMG duly drove around the outside of both and into a lead it would never relinquish.

Behind, a slow pitstop initially dropped Sakamoto’s co-driver Marcos Gomes behind Rahel Frey. However, the Brazilian was soon past TSRT’s Audi and in pursuit of Hamprecht who he subsequently overtook at the same corner as Metzger with 10 minutes remaining.

Gomes was unable to catch Metzger who finished 4.8s clear, while Hamprecht came home another 3.5s further back. All three must now serve Pitstop Success Penalties tomorrow when the advantage will theoretically lie with Absolute’s Porsche.

Frey finished where team-mate Chen had pitted from after holding off Absolute’s second 911 shared by Yuan Bo and Yeo Le Hongli. They were chased hard by Martin Rump whose 15s Success Penalty limited his opportunity to catch the leaders after co-driver Weiron Tan had made his way up to fifth in the opening stint.

Pro/Am entries finished seventh and eighth, Shane van Gisbergen getting the better of Panther/AAS Motorsport’s Alex Imperatori on the final lap after the Kiwi’s scintillating stint saw Triple Eight’s Mercedes-AMG set fastest lap. Both crews were helped by VSR’s Lamborghini, which dropped to third in class and ninth overall after picking up a drive-through penalty for speeding in the pits.

A pitstop infringement also restricted JRM’s Porsche to 10th after Anthony Liu starred in the opening stint. The Chinese driver dropped from fourth to 17th on lap one but set a series of blistering laps to bring the car back into contention before Chris van der Drift climbed aboard.

AMAC Motorsport’s Andrew Macpherson and Ben Porter won the Am class in their Lamborghini.

Second win of the season for Panther/AAS

Vutthikorn Inthraphuvasak remains a Blancpain GT World Challenge Asia title contender after he and Panther/AAS Motorsport co-driver Alex Imperatori scored their second victory of the season at the Korea International Circuit on Sunday. 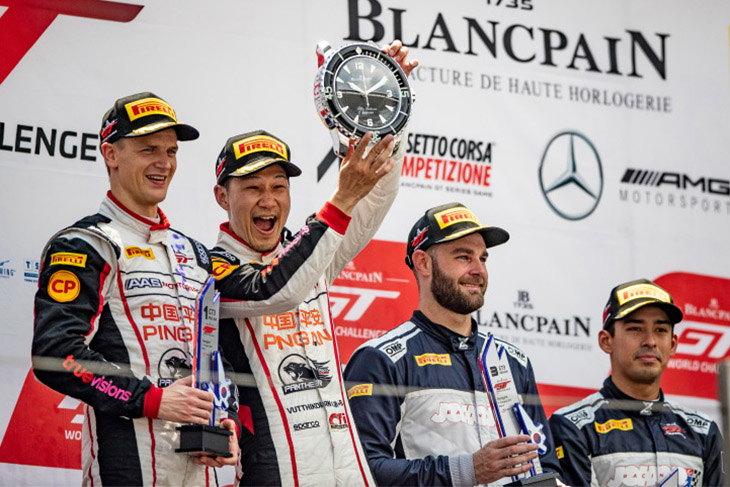 Alex Imperatori and Vutthikorn Inthraphuvasak’s victory was built on the latter’s successful pursuit of Jefri Ibrahim who slipped behind the Porsche with 10 minutes remaining.

The Johor prince’s lead owed much to co-driver Shane van Gisbergen who, having been gifted pole due to Craft-Bamboo’s five-place grid drop, set about dismantling the field during the first 35 minutes. The Kiwi’s fastest lap was 0.6s quicker than anyone else, while a succession of rapid times helped Triple Eight’s Mercedes-AMG eventually pit with a 14.1s advantage over Imperatori whose only opportunity to pass came at Turn 3 on lap one.

Ibrahim duly emerged from the pitstops with a sizeable advantage over Inthraphuvasak. However, the latter’s far greater experience allowed him to close in and pass the Mercedes-AMG, which then slipped into the clutches of Anthony Liu who’d transferred his prodigious pace from Saturday to Sunday.

The former race winner, who was making his debut with JRM and the Porsche this weekend, dispatched Ibrahim at Turn 3 but ran out of laps to catch Inthraphuvasak.

Next up was Yuan Bo whose co-driver Leo Ye Hongli ran third during the first stint. He found Ibrahim a tougher nut to crack before finally prising the door open with five minutes remaining. The Absolute Racing Porsche would go on to score Silver Cup victory as well as an overall podium.

The loss of three places in quick succession could have deflated Ibrahim. Instead, the Triple Eight driver was somehow galvanised by the experience just in time for championship contenders Yuya Sakamoto and MG Choi to arrive on his tail. Their respective co-drivers, Marcos Gomes and Manuel Metzger, had run fifth and sixth before the pitstops but initially dropped places as a result of the 10 and 15s Success Penalties incurred for finishing one-two yesterday.

And it was Ibrahim’s valiant defence that ultimately helped Choi make what could become a significant move in the context of this year’s title battle. Sakamoto would have cut the Korean’s advantage had he remained ahead but fell further behind when Choi relieved him of fifth with an opportunistic pass. The points difference then further increased when Choi took fourth from Ibrahim on the penultimate lap.

The Audi Sport Asia Team TSRT R8 shared by David Chen and Rahel Frey made progress in the second stint to finish seventh, while Tanart Sathienthirakul and Philip Hamprecht – who began the day four points behind – recovered from a pitlane start and five-second Success Penalty to salvage eighth.

One of those positions came at the expense of Weiron Tan and Martin Rump whose drive-through penalty for making contact with VSR’s Lamborghini foiled a near-certain victory. Their lack of a Success Penalty allied to Absolute’s early pitstop ensured Tan was pressuring Ibrahim for the lead when he was called in. As such, Audi’s only title contenders have slipped 47 points behind Choi with a maximum of 50 still available.

ABSSA Motorsport’s McLaren shared by Piti Bhirombhakdi and Keita Sawa completed the top-10, while Andrew Macpherson and Ben Porter scored their second Am Cup victory of the weekend.

But there was a disappointment for VSR’s Alex Au and Frederik Schandorff who would have been podium contenders were it not for the contact with Tan that retired their Lamborghini.

GT3’s overall championship remains very much alive ahead of the final round in Shangai where a total of 50 points are still available across two more 60-minute races. MG Choi will head there as the favourite after adding a fourth-place finish to yesterday’s victory, which has helped Solite Indigo Racing’s Mercedes-AMG amass a 12-point lead over Absolute Racing’s Tanart Sathienthirakul and Philip Hamprecht.

Further back, BMW Team Studie’s Takayuki Kinoshita and Sunako Jukuchou wrapped up the GT4 class title with a round to spare by claiming their sixth victory of the season. Keo Chang and Joe Chi (Team iRace.Win), and Brian Lee and Tony Fong (GTO Racing with TTR) joined the Japanese duo on the podium.

Shanghai hosts the final round of this year’s Blancpain GT World Challenge Asia campaign on September 27/28.