39 teams gathered this weekend at Sportsland Sugo in Miyagi Prefecture, Japan, for the first of two official mid-season tests for the 2019 Autobacs Super GT Series.

Over two days of testing, teams and spectators saw heavy fog on Saturday morning and rain on Sunday afternoon. And in four test sessions over the two days, Honda prevailed.

In particular, it was the number 17 Keihin Honda NSX-GT of Koudai Tsukakoshi and Bertrand Baguette that set the benchmark in all three dry-weather sessions, starting on Saturday morning, in a session red-flagged twice due to heavy fog.

Tsukakoshi set the best time in the morning with a 1’11.865, then Baguette set the fastest time of the entire test in the afternoon with a 1’10.634, leading a Honda sweep of the top 4 places.

Come Sunday, Tsukakoshi once again set the pace in the morning session with a 1’10.828, before heavy rain impacted Sunday afternoon’s running. In that fourth and final session, it was the #1 Raybrig NSX-GT of defending champions Naoki Yamamoto and Jenson Button that set the pace in the rain.

Best of the Lexus squads was the #19 WedsSport Advan LC500 (Yuji Kunimoto/Sho Tsuboi) with a 1’11.180 set on Sunday morning. It was straight to the trains for the Lexus teams after testing to take part in a Toyota Gazoo Racing fan festival event at their Mega Web facility.

The fastest Nissan team was the #12 Calsonic Impul GT-R (Daiki Sasaki/James Rossiter) on a 1’11.259 set on Saturday afternoon.

In GT300, the #61 Subaru BRZ R&D Sport (Takuto Iguchi/Hideki Yamauchi) led the way on Saturday with a best time of 1’18.732, before the #25 Hoppy Toyota 86 MC (Takamitsu Matsui/Kimiya Sato/Takeshi Tsuchiya) set the outright fastest time in the class on Sunday morning, a 1’18.307. 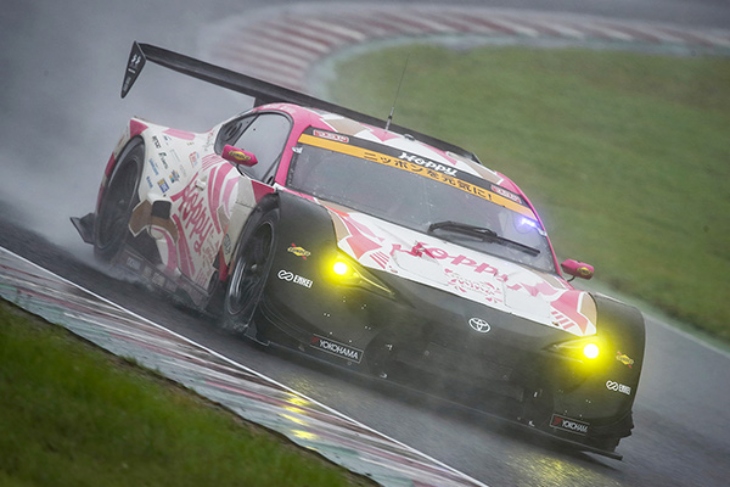 The return of Katsumasa Chiyo to the Super GT paddock was a much-welcome sight to see. 2015 Bathurst 12 Hour winner and Blancpain GT Endurance Cup Champion Chiyo carried out two days of testing aboard the #48 Go&Fun Shokumou Nissan GT-R GT3 for NILZZ Racing Factory.

Chiyo finished the fog-affected Saturday morning session P1. He was 4th overall on Saturday and 12th overall on Sunday, completing a total of 76 laps.

A name to keep an eye on is Togo Suganami, the 23-year-old prospect currently racing in the FIA F4 Japanese Championship. Suganami drove 65 laps over 2 days aboard the #65 LEON Pyramid Mercedes-AMG GT3.