The ADAC GT Masters series headed straight from Zandvoort to the Nürburgring for the second half of a back-to-back over the weekend. While the races in the Netherlands produced wins from Land and Grasser Racing, the trip to the ‘Ring ended with two wins for the latter, with Mirko Bortolotti and Christian Engelhart and Rolf Ineichen and Franck Perera taking wins in the two races respectively.

Pole-sitters Mirko Bortolotti and Christian Engelhart cruised to a second win of the season in Saturday’s ADAC GT Masters race at the Nürburgring in their Orange1 by GRT Grasser Huracan GT3. 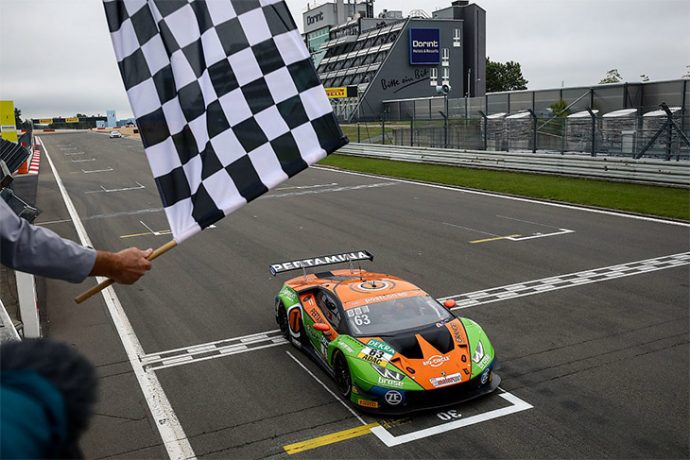 Luca Stolz and Maro Engel finished second in Toksport WRT’s Mercedes-AMG GT3, making for a head-turning maiden podium for the team in only its second weekend in the series (as a guest entrant they are unable to score points). Joining the podium in third were current championship leaders Patric Niederhauser and Kelvin van der Linde, who scored much needed points in their HCB-Rutronik Racing Audi to consolidate their championship lead after a tough run in Zandvoort.

“In recent years, the Nürburgring has been a problematic track for us,” said Engelhart. “But now, with the new car, it seems to suit us a lot better. After the win at Zandvoort, it’s great to get another here.”

For Bortolotti and Engelhard it was a comfortable win from pole, with Bortolotti only put briefly under pressure at the start before pulling away from the rest of the field. He had opened up a gap of just over three seconds by the time he came into the pits towards the middle of the race for the mandatory change of drivers. Partner Engelhart then extended their cushion to more than five seconds at times. It was not until the final few laps that the German half of the partnership was then able to ease off a little, eventually taking the chequered flag by a margin of 2.7 seconds. Bortolotti and Engelhart finished on the top rung of the podium for the second time in a week after their success in Saturday’s race at Zandvoort.

Luca Stolz and Maro Engel in second also finished on the podium in the best-placed Mercedes-AMG ahead of the aforementioned championship leaders. Stolz and Engel had been fourth behind the Audi pairing initially, but on Lap 7, Stolz found a way past Niederhauser to take third place which he then maintained until the pit stop.

Fourth place went to RWT Racing’s David Jahn and Sven Barth in the best-placed Corvette C7 GT3-R. Max Hofer and Christopher Mies came home behind them in their Land Audi to finish fifth overall. Indy Dontje and Maximilian Götz fought their way up the field in their Team HTP Mercedes-AMG GT3 from 13th place on the grid to finish sixth.

After Christian Engelhart and Mirko Bortolotti dominated Saturday’s race, their team-mates Rolf Ineichen and Franck Perera repeated the feat on Sunday making it a perfect weekend for Grasser Racing. The runner-up spot in Race 2 went to Team75 Bernhard Porsche duo Timo Bernhard and Klaus Bachler for the second time this season. They finished narrowly ahead of championship leaders Patric Niederhauser and Kelvin van der Linde who enjoyed another strong finish in their HCB-Rutronik Racing Audi R8. 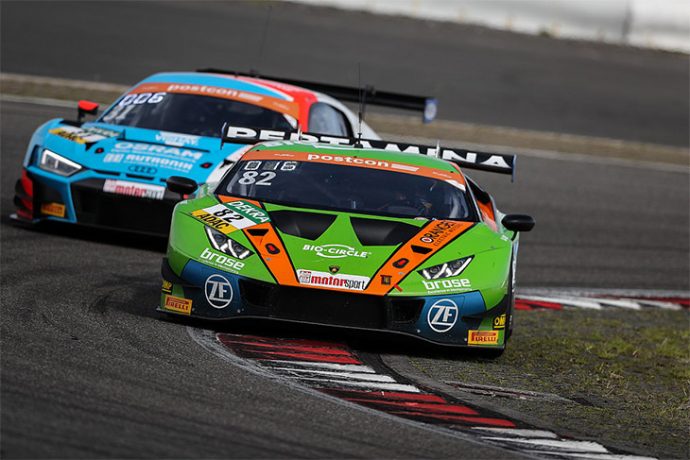 “Wow, what a great weekend for our team,” said a delighted first-time winner Perera. “Yesterday, it was our team-mates who claimed pole position and victory, and today we’ve managed to do the same. Simply mega!”

Qualifying took place in wet conditions this morning, but the Nürburgring had dried out again for the start of the second ADAC GT Masters race. Pole-sitter Franck Perera got away well in the Lamborghini and maintained his position in the lead. After a brief safety car period to recover the Lamborghini of Saturday’s winner, Christian Engelhart, and the T3 Audi of Maximilian Paul, which had been involved in a collision on the opening lap, Perera slowly drew away from his pursuers. He had opened up a gap of more than five seconds before pitting to change drivers.

Ineichen then rejoined the track with a comfortable lead and managed the race from the front to the finish line. He ultimately took the chequered flag in P1 with a lead of 5.3 seconds to secure the first success of the season for himself and Perera, who had driven during the first stint. This was at the same time the Frenchman’s maiden victory in the ADAC GT Masters and Ineichen’s fourth.

“With this win, we’ve shown that we are competitive in different conditions,” said Franck Perera “First the pole position in the wet, then the victory in the dry. It was by no means easy. At the start, I obviously wanted to stay ahead without taking too many risks, and that’s what I managed to do.

“After that, I tried to pull out a gap while also going easy on the tyres for Rolf’s stint. He then did a great job and made sure of the victory.”

The race winner was never in any doubt, but just 0.4 seconds decided the battle for second place. Until the round of mandatory pit stops, Kelvin van der Linde in the best of the Audis had been the main driver in pursuit with Klaus Bachler behind him in the Team75 Porsche, waiting to seize his chance. Bachler came in to change drivers one lap later than van der Linde towards the middle of the race, which paid off. His partner, Timo Bernhard, took second place, while Patric Niederhauser, who had taken over from van der Linde, rejoined the track in P3.

Niederhauser was all over the Porsche works driver to the finish line but could not find a way past. Bachler and Bernhard came in second for the second time this season. Van der Linde and Niederhauser were third as they had been on the previous day. Thanks to their eighth finish of the season in the Top Four, the championship leaders extended their lead to 40 points with four races remaining.