Kyle Marcelli and Nate Stacy’s #60 Kohr Motorsports Ford Mustang GT4 was named the winner of the Michelin Pilot Challenge race today at VIR, after last-lap drama resulted in the #7 Park Place Porsche, that crossed the line in the lead, being penalised post-race.

The aforementioned drama came on a last-lap restart, which saw Trent Hindman in the #7 Porsche Cayman storm past Marcelli at Turn 1 around the outside, before making a move for the lead.

To take the lead Hindman had to get past the #69 Motorsports In Action McLaren 570S GT4 of Jesse Lazare. But his dive up the inside was mistimed, and a few corners after passing Marcelli he found himself at the head of the field having turned around Lazare.

The team were subsequently penalised for the contact, meaning Marcelli and Stacy inherited the win. The incident at the end had real championship ramifications, as the points-leading #39 Carbahn Audi of Tyler McQuarrie and Jeff Westphal took second and crucially finished well ahead of the team’s title rivals.

The MIA McLaren crossed the line 10th and the #82 Bimmerworld BMW that caused the late Full-Course Yellow after the M4 GT4 stopped on track, meaning CarBahn’s duo have now opened up a sizeable lead with the end of the season in sight.

“That was insane,” said McQuarrie after the race. “This entire race was all over the place, it was dry, then it was raining, we had mud sprayed on us. It was mixed conditions all the way through and with three minutes to go it unravelled for our competition in the championship.

“I thought we’d get third, we got second. You never know what to expect with conditions like this but we’ve capitalised on it. That was crazy.

“To go to Laguna with a 24-point lead, with all my family and friends coming along, you couldn’t paint a better picture.”

The end result will come as a major disappointment to Motorsports In Action, which held the lead and lost out to a late-race restart both today and in the previous round at Road America. Lazare and Fergus were superb throughout the race, which was held in changeable conditions.

Fergus powered the Canadian team to the lead of the race 40 minutes into the race following a lengthy FCY period called for a multi-car incident at Turn 17 which saw three cars (the #57 Winward Racing Mercedes, #13 AWA McLaren and #22 Rebel Rock Camaro) slide off the circuit and into the barriers.

At the restart, Fergus, who had dropped two places during pit stops under FCY to change to wet tyres, drove from fifth to second, behind Paul Holton in the Compass Racing McLaren. The two fought hard, but Holton (who started 11th) couldn’t hold on and Fergus made the move around the outside at Turn 1.

From there it looked like MIA had enough to at least finish in the top three. Fergus held off Nate Stacy in the winning Ford for a long stretch before the round of stops for driver changes, before Marcelli and Lazare did battle late on.

Marcelli briefly passed Lazare for the lead, but the 22-year-old Canadian fought back and was at the front of the safety car queue going into the final restart. Unfortunately though, once again, the team was unable to convert it into a win.

Finishing third after the post-race penalty was the #80 BimmerWorld Racing BMW of Mike Skeen and Ari Balogh, ahead of the #46 Team TGM Mercedes of Owen Trinkler and Hugh Plumb. Both cars benefitted from the late-race dramas.

The top five was completed by the #88 Stephen Cameron BMW, which finished just two tenths ahead of the #09 Automatic Racing Aston Martin Vantage.

Akhil Rabindra and Ross Gunn in the Automatic Aston had a rollercoaster race, starting 21st and climbing as high as fifth before dropping back down the order again outside of the top 10. The Vantage was the fastest car on track multiple times (and set the best lap of the race, a 1:52.740 from Gunn) but a couple of errors and a slow stop cost the team a spot in the top five.

The #33 Winward Racing Mercedes of Indy Dontje and Russell Ward recovered from serving a penalty during the race to finish seventh.

TCR, like GS, was decided with late drama. After the running order saw multiple shuffles throughout with the FCYs and changing conditions, Nick Galante and James Vance stormed to victory in the #23 Fast MD Racing Audi RS3 LMS TCR. 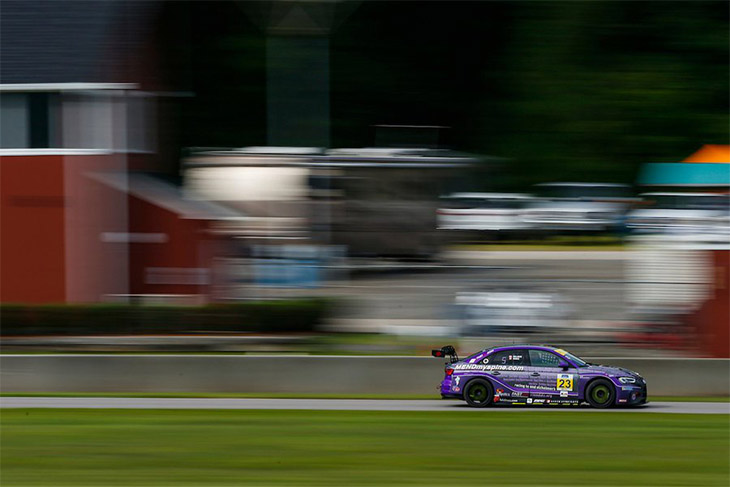 “It’s his (James Vance’s) first IMSA win, he’s such a quick driver. He battled back from my mistakes, what a fun race,” an emotional Nick Galante said after the race.

Galante’s mistake was spinning his wheels while on the air jacks during the driver change stop. This prompted the organisers to hand the team a drive-through penalty. But despite the setback, Vance recovered and took the win after a three-wide moment on the final lap.

The last-lap-dash cost the #61 Roadshagger Racing Audi dearly. Jonathan Morley, who held the lead was tapped into a spin when he, Vance and Mason Filippi’s #21 Bryan Herta Hyundai ran three-abreast. The spin sent Morley veering into a tyre barrier, drivers’ side first. Thankfully he was able to walk away.

The points-leading #98 Bryan Herta Hyundai of Michael Lewis and Mark Wilkins came home fourth, having had an off-track excursion that dropped the team valuable places in the second half of the race.

Lewis finished just up the road from the #12 ROWE Racing Audi.