On a warm, sunny, summer day in August, the next chapter of Japan’s great race commenced.

The green flag waved for the 2019 SMBC/BH Auction Suzuka 10 Hours, the 48th running of the Suzuka Summer Endurance Race, at 10:03 AM JST. An enthusiastic crowd watched as the field of 36 GT3 cars commenced battle in the fourth round of the Intercontinental GT Challenge.

2011 DTM Champion Martin Tomczyk started the race in the pole-winning #42 BMW Team Schnitzer M6 GT3 and immediately broke out of the box with the fastest lap of the race which doesn’t look set to be threatened any time soon under the heat. Walkenhorst Motorsports driver Nicky Catsburg made a great start and put the #34 BMW to 2nd, making it a BMW 1-2 on the opening lap.

Many drivers pushed to the limit in the heat. Hong Kong’s Philip Ma was the first to spin out, his #98 Arrows Racing Honda NSX GT3 going around at the exit of the Triangle Chicane. There were only a few minor incidents – Alessio Picariello, for instance, picked up a drive-through penalty in his #21 Audi Team Hitotsuyama R8 LMS for contact with reigning DTM Champion Gary Paffett and his #44 Strakka Racing Mercedes-AMG GT3.

Gentleman driver Hiroaki Nagai was spun around by a hard-charging Hiroaki Ishiura, who’d lost several places off the start in his #11 Planex SmaCam McLaren 720S GT3. No further action was taken.

Australian underdogs AMAC Motorsports were the first to have significant grief as Cameron McConnville first spun in the esses, then rejoined the track. Only then, for the #51 Porsche 911 GT3-R Type 997, one of the oldest cars in the field, to be struck by the #88 Team JLOC Lamborghini Huracan GT3 in the same part of the track, spin tail-first into the sponge barriers, and suffer major rear-wing damage. For that, the #88 JLOC Lamborghini and driver Dennis Lind were hit with a 60-second Stop/Go penalty.

The tyre degradation was severe as expected in the heat and under the duress of Suzuka’s sweeping curves. Tomczyk started to break away, but Catsburg suffered from understeer and found himself in the clutches of South Africans Kelvin van der Linde and Jordan Pepper, in the #25 Audi Sport Team WRT R8 and the #107 Bentley Team M-Sport Continental GT3 respectively.

Van der Linde kept putting pressure on the Dutchman in his BMW, but couldn’t find a way past on track. WRT decided to undercut the BMWs and bring him in on Lap 26. The first cycle of pit stops was now underway. 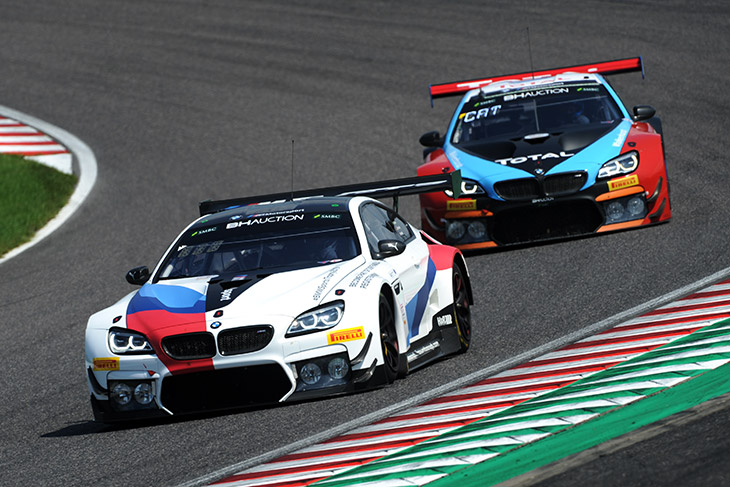 Tomczyk and Catsburg pitted the following lap, and Pepper pitted one lap later. The undercut strategy didn’t work so much for WRT, with Nurburgring 24 Hours winner Frederic Vervisch at the wheel still in third. But it did work out for the #00 Goodsmile Racing Mercedes-AMG GT3 of Tatsuya Kataoka. Kataoka also pitted on Lap 26 and was catching the front four in doing so.

A quick set of out laps helped Nobuteru Taniguchi jump the #107 Bentley, now driven by Steven Kane, for fourth position.

At the front, it remains a BMW 1-2, with pole winner Augusto Farfus now in the #42 Schnitzer BMW ahead of Christian Krognes in the #24 Walkenhorst BMW, Vervisch 3rd in the #25 Audi.

Hiroaki Ishiura pitted at the end of a 29 lap stint to yield the controls of the #11 Planex McLaren to Mika Hakkinen, the two-time World Champion driving competitively for the first time since the 2013 AFOS GT Asia round at Zhuhai Circuit.

In the cup classes, the #75 SunEnergy1 Mercedes was by far and away the class of the Silver Cup field thanks to Nico Bastian, who stretched all the way to a 30-lap opening stint and had the blue and flame Mercedes 13th overall when Mikael Grenier took over the wheel, nearly 50 seconds ahead of the #37 Callaway Competition/Bingo Racing Corvette C7 GT3-R.

The Pro-Am Cup is led by two Japanese teams at the moment – the #60 LM Corsa Porsche 911 GT3-R ahead of the #5 GTNET Motor Sports Nissan GT-R GT3. Shigekazu Wakisaka made a tough move for the lead on the #2 Cars Tokai Dream28 Lotus Evora MC of Hiroki Kato, that car is now down to 3rd, and now three-time Suzuka 1000km winner Juichi Wakisaka has climbed aboard that #60 Porsche.

A jump-start drive-through penalty put the #112 Sato-SS Sports Mercedes of Ryosei Yamashita on the back foot right away, but thanks to the spin from Ma, and another spin from Joe Shindo in the #9 MP Racing Nissan, which caused what has to be the shortest Safety Car intervention in recent history at 36 seconds (per Timing Solutions Ltd. data) the #112 Mercedes is back in the Am Cup lead.