Less than 90 minutes into the Suzuka 10 Hours, there was massive drama at the front of the field, and a major contender was knocked out.

As the #42 Schnitzer BMW of Augusto Farfus and the #34 Walkenhorst BMW of Christian Krognes were running first and second, they encountered drama at Spoon Curve when they came upon a collision between the #88 JLOC Lamborghini of Dennis Lind, and the #5 GTNET Nissan GT-R of Teruhiko Hamano. As both cars spun, Farfus was able to avoid them, but as Hamano’s Nissan rolled backwards, Krognes could do nothing to avoid a collision.

The Walkenhorst BMW suffered severe rear wing damage and went to the garage for nine laps. They would later retire, the damage proving terminal, another difficult race for Henry Walkenhorst’s team comes to an early end.

The forward progress of the #107 M-Sport Bentley stalled during the middle of the second pit stop cycle just before the start of hour two, Jules Gounon had just emerged onto track on cold tyres, and he and defending Suzuka 10 Hours champion Raffaele Marciello in the #999 GruppeM Mercedes made contact through the S-Curves, with Gounon losing out as his black and gold foil Bentley ploughed through the gravel.

The Glacier White #125 Audi Sport Absolute Racing R8 was a car on the move in the second and third hours. Christopher Haase jumped ahead of Steven Kane right at the 100 minute mark on the run from Spoon to 130R. After an exchange of drivers, Markus Winkelhock tucked into the slipstream of the #00 Goodsmile Mercedes of Kamui Kobayashi and slashed his way into third place.

And in this cycle of stops, the undercut paid off for the Nogaro Blue #25 Audi Sport Team WRT R8, as Dries Vanthoor, with his Pirelli tyres already up to temperature, breezed his way past the #42 Schnitzer BMW as it exited the pits with Nick Yelloly on board.

Marciello soon found himself back in the wars, this time with Bathurst 12 Hour action star Matt Campbell in the #912 Absolute Racing Porsche 911 GT3-R. DSC Editor Graham Goodwin spotted what appeared to be a bit of wobble on the Porsche’s rear wing, but no matter, the young Aussie was still piling on the pressure all the same.

But then, with 2 hours, 25 minutes elapsed, we got our first major incident. 2017 GT500 Drivers’ Champion Nick Cassidy in the #27 HubAuto Corsa Ferrari 488 GT3 brushed wheels with Hong Kong’s Jacky Yeung in the #98 Arrows Racing Honda NSX GT3. The contact sent Yeung up the gravel through the “kick” at Hairpin Curve, and Yeung was unable to stop his car from drilling the left side of Cassidy’s Ferrari. Somehow, Cassidy avoided major damage, but the Arrows NSX’s problems were much more severe, a drive-through for causing the collision the least of their worries 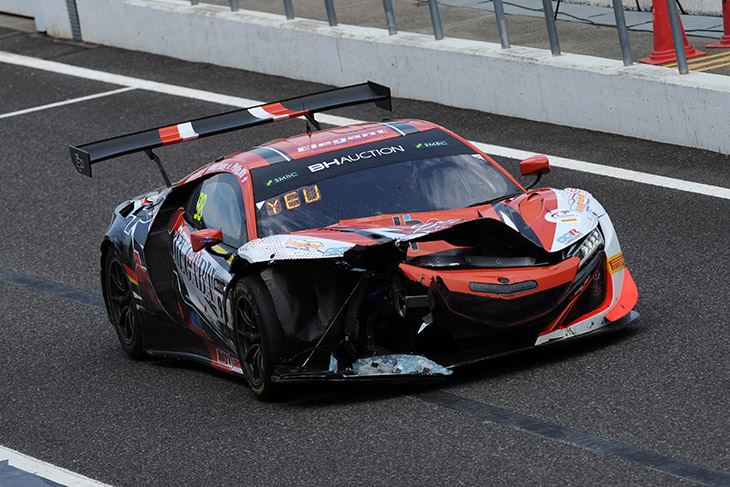 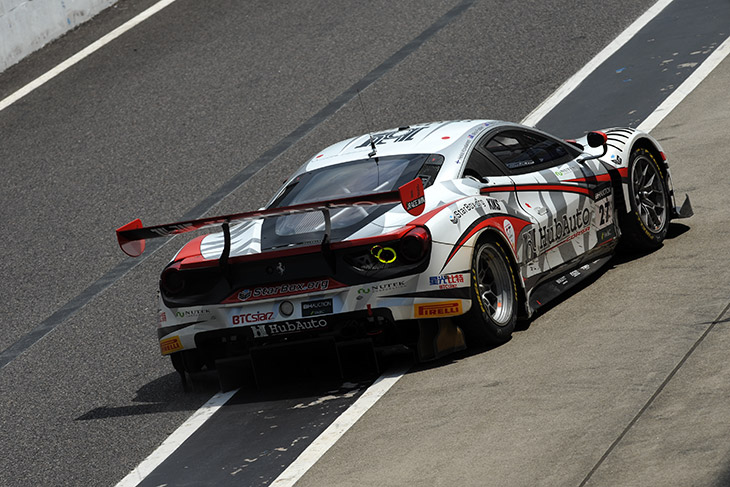 There was some confusion on deploying a Full Course Yellow, then a Safety Car, then an FCY right afterwards, then an SC, it effectively broke down to 11 minutes under FCY, another 5 minutes under SC before racing resumed.

During this intervention, the #912 Absolute Porsche, the #35 KCMG Nissan GT-R of Josh Burdon, and the #777 CarGuy Ferrari of James Calado stayed out, going off-strategy. The #25 WRT Audi pitted for the third time with Van der Linde getting in for his second stint. Martin Tomczyk came back to the #42 Schnitzer BMW in 2nd, which pitted twice, once for routine service, once for a top-off. The loser on pit stop timing was the #125 Absolute Audi, which sunk back to the mid-field by pitting just as the FCY/Safety Car switch over happened.

But it didn’t take long for Christopher Mies in the #125 Audi to get back to the tail of Tomczyk in the Schnitzer BMW and back into net 3rd position, after passing the #00 Goodsmile Mercedes of Kobayashi.

Elsewhere in the field, Mika Hakkinen had a productive first stint aboard the #11 Planex SmaCam McLaren 720S GT3. He worked his way solidly into the top 20 and stretched out his first stint to pit from P4 for Katsuaki Kubota to take his place. But Kubota-san soon learned that while driving historic Grand Prix cars is one thing, driving competitive GT3 cars is another, as he spun on his second lap of his stint.

In the Silver Cup class, the #75 SunEnergy1 Racing Mercedes once again remains the class of the field thanks to the driving of Mikael Grenier and Nico Bastian, with Kenny Habul doing well in his first stint in the car. They’re now solidly in the overall top 20, but have just been hit with a drive-through penalty for speeding in the pitlane just before the start of hour four! No matter, their class lead is safe.

The #188 Garage59 Aston Martin Vantage GT3 was scored as the leader in Pro-Am at the 3-hour mark, still yet to complete their third stop.

In the Am Cup, the #112 Sato SS-Sports Mercedes still leads by over 20 seconds to the #9 MP Racing Nissan. That has implications outside of the IGTC, as the #5 GTNET Nissan that was caught up in the second-hour accident can clinch the 2019 Pirelli Super Taikyu Series title today with a second-place or better finish between this trio of eligible cars, as, of course, this race also counts towards the Super Taikyu championship.