It’s set up day at Silverstone for the European Le Mans Series, and despite it being a mid-season round on Saturday, there’s plenty of ‘new’ in the pit lane.

There are two new ORECAs on show in public for the first time here at Silverstone. United’s #32 07 Gibson is already in the team’s full livery, identical to the car it ran in the FIA WEC Prologue at Barcelona. The switch to an ORECA for the #22 has come so late that the team’s pit hoarding still displays “Ligier JS P217”. 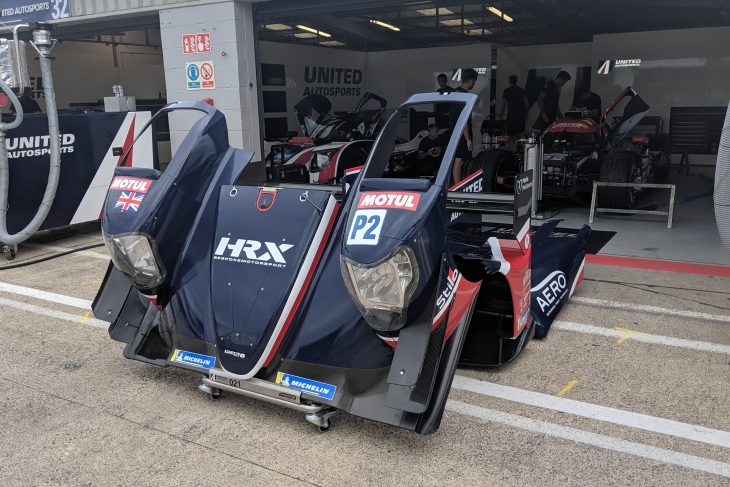 This is due to be the last time the team competes with a JS P217, as the second car, as DSC understands that the #32 of Will Owen, Alex Brundle and Ryan Cullen, will also be an ORECA from Spa onwards. 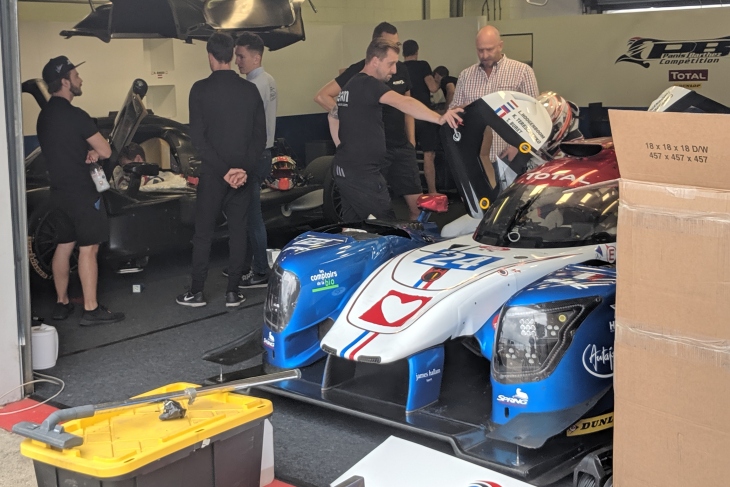 With two teams switching chassis for this round, there are now 13 ORECAs (one badged an Aurus), four Ligiers and a single Dallara in LMP2.

Danner ready for the weekend

Lukas Danner’s name was spotted on the side of Inter Europol’s Ligier JS P217 for the first time. Danner is set to make his LMP2 debut this weekend in the seat originally filled by Leo Roussel who is still recovering from his big off at Monza earlier this year.

Inter Europol’s LMP3 effort meanwhile, is searching for its ninth class podium in a row.

This weekend we can expect lap times to tumble significantly, as the teams and drivers race on the Silverstone circuit since it was resurfaced earlier this year. DSC spoke to RLR driver Christian Olsen, who had a brief run on the circuit in a test day a few weeks ago. His feedback was positive, with the new surface smoother and grippier. He expects the LMP3 cars to be able to lap the circuit 2-3 seconds faster than last year.

DragonSpeed back in white?

DSC spotted DragonSpeed mechanics applying a new livery to the team’s ORECA, which appears to be the all-white colour scheme the team has used in the past. 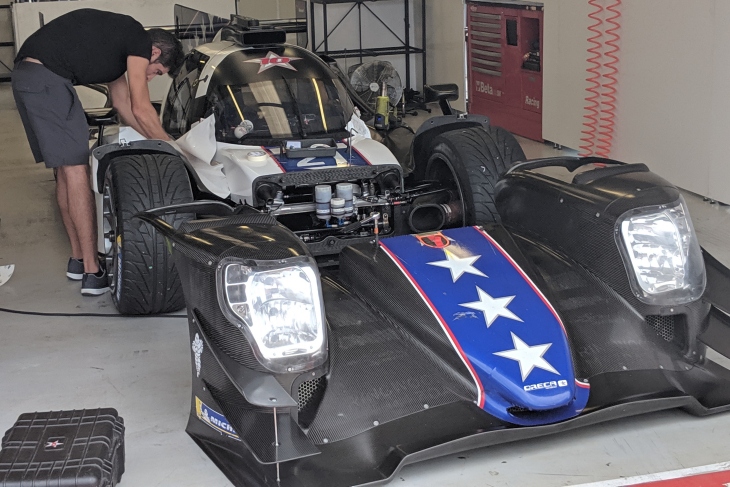 Prior to this weekend in the ELMS DragonSpeed had raced in bare carbon with its usual stripes.

While there’s no Michelin Le Mans Cup race supporting the ELMS here at Silverstone, DSC did spot one of Kessel’s Le Mans Cup GT3 Ferraris in the pit lane. 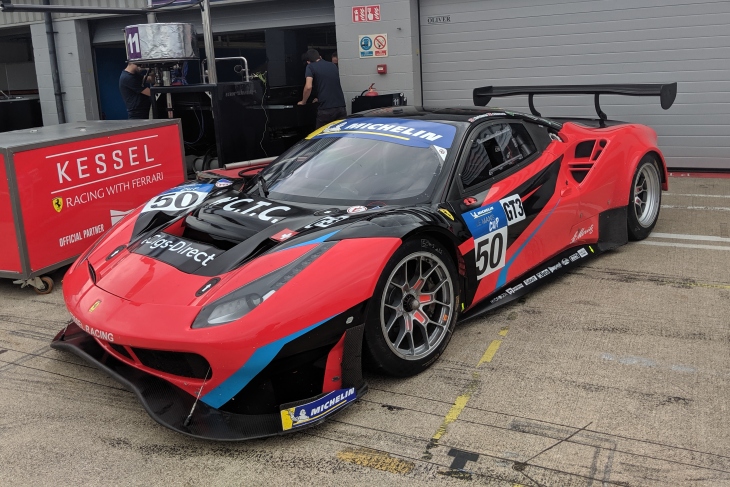 GTE down on numbers

Both Proton Porsche 911 RSRs are here at Silverstone though it is still unclear whether or not the German team will race both. The #88 still only has Thomas Preining listed to drive. 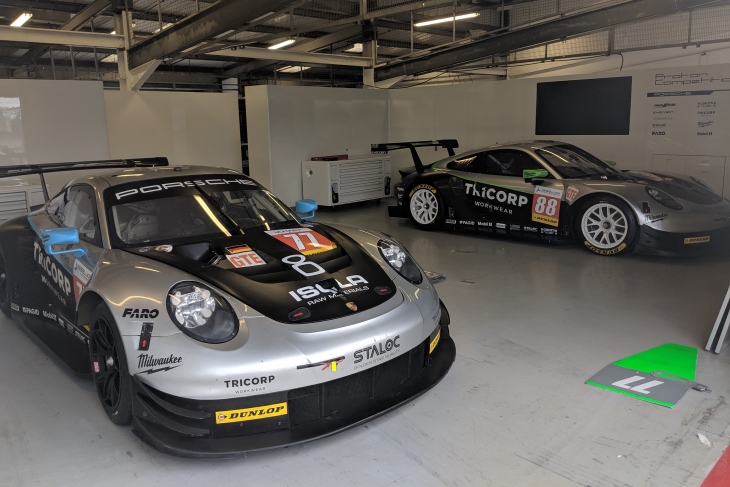 Elsewhere in GTE, Project 1 and Ebimotors’ Porsche are not here for the ELMS race. Project 1 will still race two cars in the WEC season opener but is still awaiting delivery of its third 911 RSR. DSC has been told by an ELMS spokesperson that Egidio Perfetti didn’t want to do double-duty anyway this weekend.

Ebimotors meanwhile couldn’t find a third driver for this weekend and has had to pull its Porsche from the race. The team hopes to be back for the race at Spa.

Success Ballast in GTE set for the weekend

The ELMS Committee has issued the updates for the LMGTE Balance of Performance and Success Ballast changes ahead of the 4 Hours of Silverstone. 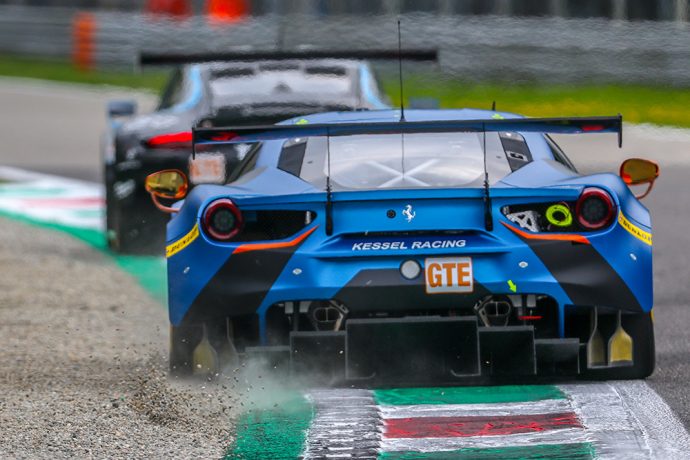 The only changes to the Balance of Performance (BoP) since the last race in Barcelona last month is to reduce the minimum weight of the Porsche 911 RSR GTE and the Ferrari 488 GTE EVO by 15kg each. The result is the minimum weight of the Porsche is now 1235kg (from 1250kg) and the Ferrari 1270kg, down from 1285kg. All of the other BoP criteria remain unchanged from the 4 Hours of Barcelona.

There are four cars at Silverstone that will be carrying success ballast. The 4 Hours of Barcelona winners, the #51 Luzich Racing Ferrari, will have to carry an extra 35kg for the British round of the championship. This is made up of 15kg for the win in Spain, 5kg for the third place in Monza and 15kg for the first place in the championship after three races.

The #66 JMW Motorsport Ferrari and the #77 Dempsey-Proton Racing Porsche will both be carrying an extra 25kg at Silverstone.

The Dempsey-Proton Racing Porsche’s success ballast is made up of 15kg from the win at Monza and 10kg for the second place in the championship.

The #55 Spirit of Race Ferrari is the final car on the LMGTE grid at Silverstone to carry success ballast, with an extra 5kg for the team’s third place in Barcelona.