From brand new cars to new chassis, and depleted driver line-ups to storybook returns, the class winners for the FIA World Endurance Championship season-opener all had a story to tell. DSC did the rounds after a hard day of racing on Sunday to hear from drivers in each winning car.

While it has spent its time since the early-90s being rather nomadic, being awarded to British GT Championship winners, touring car racers and Silverstone FIA GT victors, the historic RAC Tourist Trophy has found a long-term home as the overall prize for the WEC weekend. 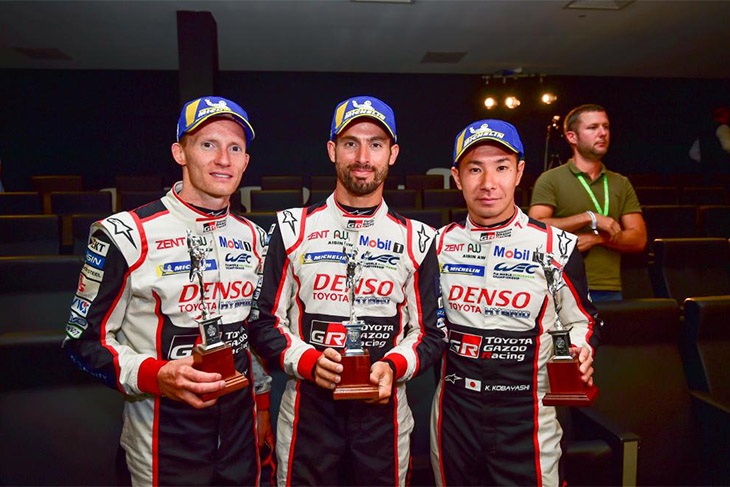 Watching Kamui Kobayashi, Mike Conway and Jose Maria Lopez gradually spin the silverware 360 degrees during the press conference to read the list of names that have won beforehand was very entertaining to DSC and the assembled media.

Conway commented on what it meant to win the TT: “There are some really amazing names on there. It’s great to be a part of that list, and I’ve always been a little jealous seeing the other guys lift the trophy all the time! It’s nice to be a part of that, and it’s a great result for the team. They worked hard this weekend, so it’s great to pay them back.”

As reported during the race weekend, a chassis change was forced upon the #7 crew after a particularly rough run over the curbs in Free Practice 2.

Conway praised the Toyota Gazoo Racing teams’ efforts: “They had no sleep from Friday into Saturday. They literally went back to the hotel to shower, so that’s pretty tough. And, when they did try and get some sleep, the fire alarm went off in the hotel, so they all had to exit their rooms.

“It was very tough on them, so it’s great to reward them with this.”

Bruni happy with the first win for RSR-19, competition in GTE Pro

Bruni said: “I mean, it’s only the first race. It’s nice to start like this; a good push! I’m very happy to get this win with Richie [Lietz], and we’ve worked very hard since we’ve put this car on the ground – so I’m really, really happy.”

The Italian racer also seemed to approve of the greater variety of race lengths in the 2019-2020 season after the four-hour race at Silverstone, and also spoke positively about the landscape n the flagship GT class: “It was very intensive. It was four hours, with only six cars [in GTE Pro], but we had different weather and lots of overtaking. The competition is really strong, and to be on the podium you really have to fight, so it’s great.”

After taking a gamble on moving to WEC newcomers Cool Racing to fulfil a desire to be more hands-on with a racing team, LMP2 maestro Nicolas Lapierre was very pleased with his class-winning result alongside Antonin Borga. 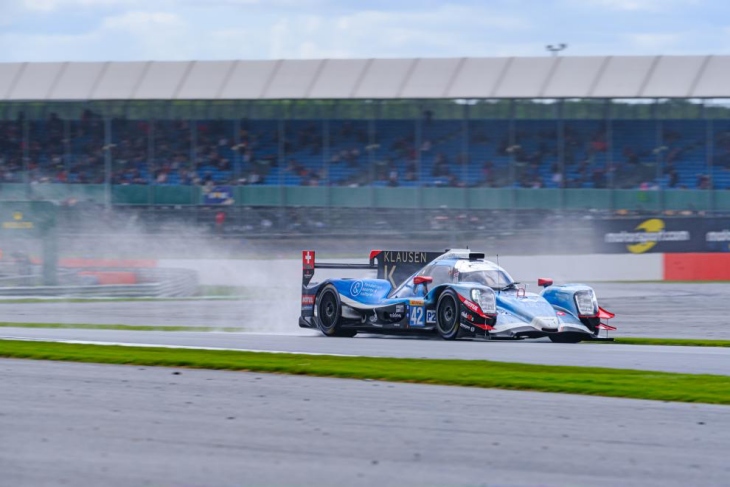 The Frenchman said: “It’s fantastic to win on the first time in the WEC for the team, especially since we had both championships here. It was a logistic nightmare for us; we had to have people there and there [in both paddocks], so it was very complicated. They had to work really hard to prepare two cars, two sets of spares, so it was a massive effort for the team.

“Yesterday was a disaster for us, but today finally we get a massive reward with a win in the WEC. It was more than we could expect in the first season, and we already got it in the first race, so wonderful.”

The team’s third driver Alexandre Coigny was not able to race following a shunt during Saturday’s European Le Mans Series race, but Lapierre expects his squad to be back to full strength next time out in Fuji: “[Alexandre returning] is the plan. We have more examinations to do next week, but as early as he can be will be the best.”

GTE Am winner Emmanuel Collard was also at Silverstone in July, reliving his past somewhat by campaigning a Pescarolo 01 LMP1 car in the Masters Endurance Legends race at the annual Silverstone Classic. 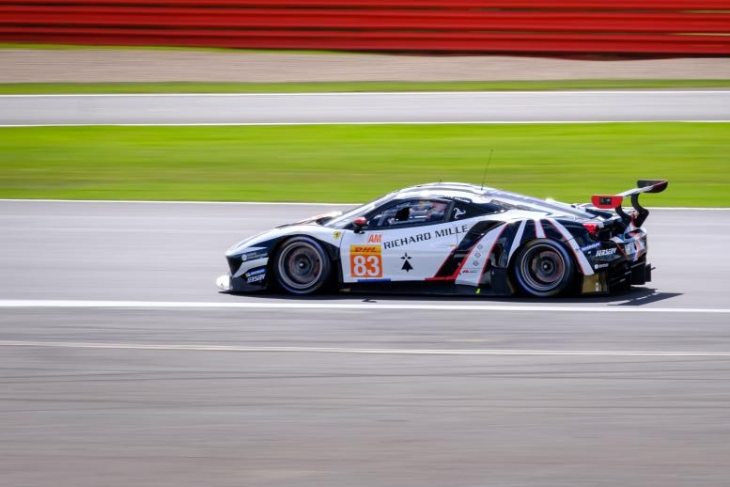 A little over a month later, and the resumption of his modern-day career happened in the best way possible. He told DSC: “It’s a very good feeling. I couldn’t believe that I could come back after two years without racing. It’s because of Francois [Perrodo], he is a good friend. When he called me back for racing in GTE Am, I was really pleased – though I had to train again!”

“But I have no regrets at all because it’s a very good feeling.

“[The championship] is the goal. We didn’t know before we came here exactly where we were. We knew that there were more cars than in the past and a very good driver line-up, so we didn’t know, but now we are very confident for the season.

“Francois is improving a lot. He learnt a lot in LMP2 cars, and now he’s much stronger for fighting in a race. It’s really good to see.”

Perrodo also spoke to DSC about his return to the GTE Am ranks: “It feels like it’s definitely the right class to be in. Although, I think it’s a bit ironic because this year – in LMP2 – it’s also a very nice field of eight cars, and I think half of them have got Bronze drivers. But, it is what it is.

“The cars are obviously a bit slower but it doesn’t make them any less exciting to drive. I don’t know about the others, but the 488 is just a massive step compared to the 458. The old car relied a lot on the aero grip, but the new one allows you to carry more speed in the corners. It’s a lovely machine, I just miss the sound of the 458!”

Perrodo also spoke of his long-time teammate and on-track mentor, Collard: “He’s eternal! For me, it was important to race with a very good friend. He’s taught me everything, and of course, we won the title in ’16. I mean, I know he knows that there are faster Platinum and Gold drivers out there; young kids. But I just wanted to respect the spirit of GTE Am and race with my mate.

“I’m also so happy to have found Nicklas [Nielsen], who’s mega fast and a nice guy too, I’m happy I followed the recommendation of Ferrari for him.”

Toyota driver Brendon Hartley (who finished second in the #8 TS050 HYBRID) told DSC after the race that he felt the LMP1 result, which saw all four privateer P1s finish off the lead lap, didn’t tell the full story. 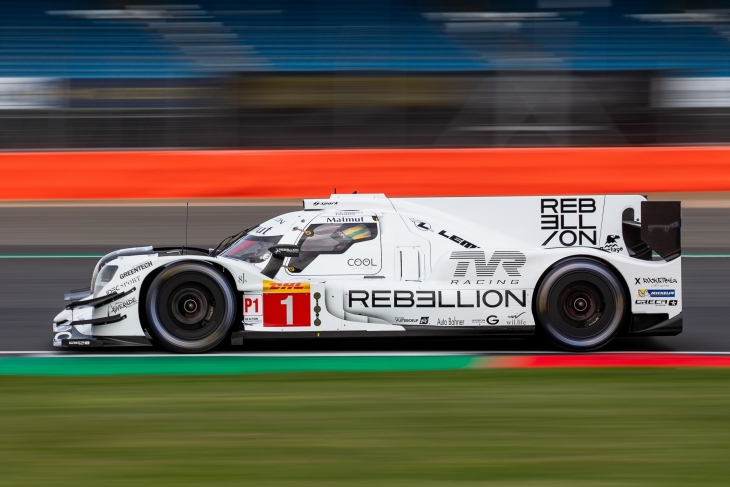 “The final result (which saw all four privateer LMP1s finish off the lead lap) doesn’t reflect how close they were,” he said. “It’s obvious we have an advantage in traffic still. We can save energy in one place and use it in another; we’re lighter on tires. I know there were issues for some of them but in Free Practice they were strong. Just in the race, they didn’t get anything together.

“The gap was a bit of a surprise, especially after what they showed in testing. But with the handicap in play, I think things could swing around quite quickly. The weight this weekend, when you put kilos in the car you lose pure lap time — it’s physics. There’s no hiding that the extra weight we had this weekend slowed us this weekend. But we still won the race, and still had the advantage in race pace.

“We all want wheel-to-wheel racing, tough battles and if that’s what we’ll get then I’m in favour (of this system). We need to let it play out over the year, this is a bit of a trial.”