2019 has been a frustrating season for Keihin Real Racing, who came into the season with championship aspirations, but a number of incidents have derailed their quest for the GT500 Championships in the Autobacs Super GT Series.

But in a straightforward qualifying session for Sunday’s Autopolis GT 300km Race, the blue and silver #17 Keihin Honda NSX-GT of Koudai Tsukakoshi and Bertrand Baguette took pole position and capped off a perfect Saturday of practice and qualifying.

Going into the weekend, the Keihin NSX was to be considered among the favourites to contend for the race win at Autopolis, carrying just 20 kilograms of Success Ballast as a result of their early-season struggles. Baguette started the day with the fastest time in the morning’s free practice.

Then the Belgian ace set the fastest time in the first phase of qualifying, leading the way in Q1 on a best lap of 1’34.415. Two Hondas, two Nissans, and four Lexus made their way through into Q2, in a session where teams were really limited to just one true attack lap due to the high tyre degradation around the technical, undulating 4.6-kilometre circuit.

Several of the top teams in the championship were going to have trouble just making it through to Q2, weighed down with heavy Success Ballast. The championship leading #6 Wako’s 4CR LC500 (Kazuya Oshima/Kenta Yamashita), on the maximum 100 kilos of ballast, did a fine job just getting off the back row in 14th. Also missing the cut, the #23 Motul Autech NISMO GT-R (Tsugio Matsuda/Ronnie Quintarelli) in 10th, and the #1 Raybrig NSX-GT (Naoki Yamamoto/Jenson Button) in 12th. Number three and five in points, respectively.

In Q2, the two Hondas that made it through to the session were the only ones to break the 1 minute 34 second barrier. Tomoki Nojiri in the #8 ARTA NSX-GT put in a 1’33.967, two and a half seconds off his own lap record set last autumn. It’d be good enough for 2nd place on the grid for he and Takuya Izawa.

Next, over the line, Tsukakoshi powered the Keihin NSX-GT to pole position by seven-tenths of a second, a best time of 1’33.262, settling in less than two seconds off of the lap record on a warm, cloudy late summer day. It was his and Real Racing’s first GT500 pole position since April 2018 at Okayama International Circuit, and the third of Tsukakoshi’s career – all of them with Real Racing.

“In Q1, Baguette ran a good attack that showed us the high potential of our machine,” said Tsukakoshi. “So all I had to do was put my trust in the machine, and I was really confident as I made my attack. The potential of the NSX-GT was very high, and since we were carrying only a light load of 20 kg in handicap weight, the conditions really favoured us and I was able to take advantage of that. I think we have a great flow going for tomorrow’s race, so I want to give it my all.”

Behind the all-Honda front row, the #24 Realize Corporation Advan GT-R of Mitsunori Takaboshi and Jann Mardenborough showed out in a big way, qualifying third, their best start of the season thus far. The best of the Lexus LC500s was the #36 au TOM’s LC500 of Kazuki Nakajima & Yuhi Sekiguchi in fourth. They come into this race sixth in points.

The #39 Denso Kobelco SARD LC500 (Heikki Kovalainen/Yuichi Nakayama) starts 5th, ahead of the #3 CraftSports Motul GT-R (Kohei Hirate/Frederic Makowiecki) in 6th. Then, the 2nd and 4th ranked teams in the GT500 standings will start on row four. It was a herculean effort for either car to make it out of Q1, especially the #37 KeePer TOM’s LC500 of Ryo Hirakawa and Nick Cassidy, which starts 7th, carrying 88 kilos of Success Ballast. Rounding out the top eight is the #38 ZENT Cerumo LC500 (Yuji Tachikawa/Hiroaki Ishiura).

Honda’s qualifying pace was impressive, but they did suffer from tyre degradation and slumped down the order in last year’s Autopolis 300km. It’ll be interesting to see how the front-row starters fare this time out. 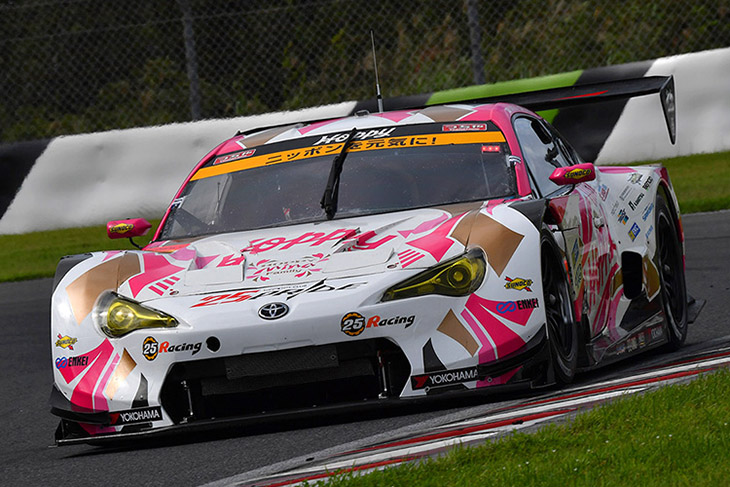 In the GT300 class, Tsuchiya Engineering scored their third pole position of 2019 and their third consecutive pole position at Autopolis. The #25 Hoppy Toyota 86 MC of Takamitsu Matsui and Kimiya Sato continued to excel in qualifying as Mother Chassis vehicles locked out the front row.

In Q1, Hiroki Katoh got things going by setting the fastest time in the first phase of qualifying in the #2 Syntium Apple Lotus Evora MC. He was fastest in practice as well. Gentleman driver Kazuho Takahashi took to Q2 and put them 16th on the grid.

Sato had done more than enough to get the pink and white Hoppy 86 to Q2, and then it was time for Matsui to continue his qualifying brilliance in 2019. A best lap of 1’44.423 was two seconds off the record set in this very same car by Sho Tsuboi last October. But it was more than enough to lock up career GT300 pole position number seven for Matsui, and to give the Hoppy 86 its third pole position of 2019 and their fifth consecutive front-row start as well!

Matsui said, “I am very happy to have won pole position, but in the official practice we had trouble with the brakes, and it was the great job that our mechanics did to fix the problem in time for the qualifying that we owe this pole position to.”

“I think that was the whole story today. The result of today’s qualifying only gives us a start at the front of the grid for tomorrow’s race, and our first priority will be to get to the end and take the checkered flag in as high a position as we can.”

For the second straight race the Hoppy 86 MC will share the front row with the #52 Saitama Toyopet GreenBrave Toyota Mark X MC of Shigekazu Wakisaka, and Kumamoto Prefecture native Hiroki Yoshida, who qualified 2nd in the green and gold machine.

The mid-season appointment of FIA F4 Japanese Championship prospect Togo Suganami to partner Naoya Gamou and replace Haruki Kurosawa in the #65 LEON Pyramid AMG was one of the big stories of the weekend. Suganami finished seventh in his first of two F4 races, then qualified 14th in Q2, his first Super GT time attack.