The concluding weekend at the Hungaroring was dominated by the AKKA ASP squad, which secured a brace of wins with its #88 Mercedes-AMG, but the final celebrations belonged to FFF and the #563 pairing of Caldarelli/Mapelli. They held a two-point advantage over Luca Stolz and Maro Engel ahead of today’s decider, but with the #4 Black Falcon Mercedes-AMG starting fourth on the grid and the #563 FFF Lamborghini only 13th the race was perfectly poised for drama. 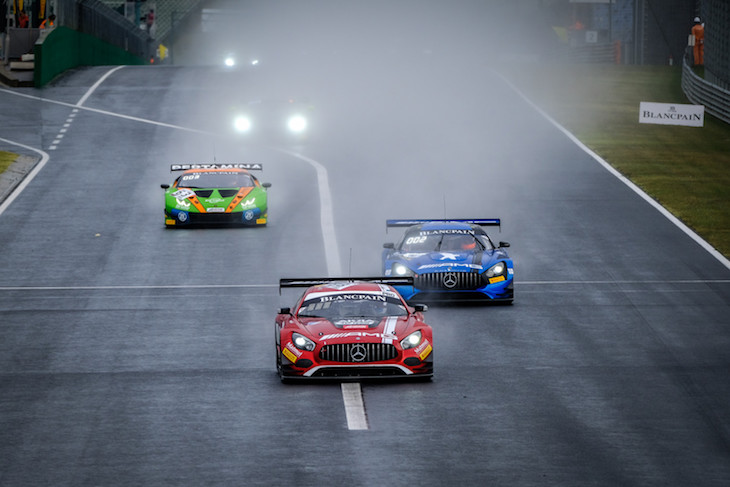 Vincent Abril started from pole in the #88 Mercedes-AMG he shares with Raffaele Marciello. The duo clinched victory in Saturday’s opening run and knew that another win would seal the third spot in the Blancpain GT World Challenge Europe drivers’ standings, while also giving AKKA ASP a shot at the teams’ title.

Once the green flag flew to start the race they delivered one of the most dominant drives of the 2019 season. Indeed, neither Abril nor Marciello were seen for much of the 60-minute event as they rapidly disappeared up the road to take the victory while the title pendulum swung behind them.

At first, the advantage lay with Black Falcon. Engel took the first stint and immediately picked up a spot by completing a brave move on Dries Vanthoor (#1 Belgian Audi Club Team WRT) to take third during the opening sequence of corners. Thereafter, the German driver was hot on the heels of Christian Engelhart (#63 Grasser Racing Lamborghini).

With Engel third, the #563 FFF Lamborghini needed to be at least fourth if Caldarelli and Mapelli were to take the title. This did not look likely during the opening stint, despite a valiant effort by Caldarelli. The Italian immediately moved into P11, then made his way past a number of fast cars to climb to the eighth spot. Nevertheless, the Lamborghini was still some way short of the minimum requirement to seal the crown.

Indeed, much of the FFF squad’s hope lay in a rapid pit stop. They were among the first stoppers, along with the #63 Grasser machine, and as two Lamborghinis returned to the circuit it was immediately obvious that the #563 had made up significant ground. However, it was not until a number of other cars stopped that it became clear exactly how much progress FFF had made.

The #88 AKKA ASP machine continued to lead comfortably at the end of the pit stop phase as Marciello made full use of the clear track ahead of him. Behind the Mercedes-AMG was Bortolotti, who had taken over the #63 Grasser Lamborghini, but a good stop by Black Falcon saw Stolz emerge alongside the Italian driver.

Bortolotti narrowly held on to second, with the #4 Mercedes-AMG slotting into third.

This would prove crucial to the eventual outcome of the championship because the #563 Lamborghini had made up four spots to run fourth once the order had settled down. The FFF crew’s work in the pits has been sterling all year, earning them the 2019 Pit Stop Challenge award, and there was certainly no exception at this pivotal moment.

Mapelli was now at the wheel of the #563 machine and knew that the title was safe so long as Stolz did not pass Bortolotti. The German driver set pulses racing in the FFF garage by closing on to the rear of the #63 machine, even moving as if to attempt an overtake, but ultimately there seemed to be no way past. Still, just one more place would have been enough to swing the title towards Black Falcon, ensuring a nail-biting finish to the season.

Out front, the dominant Marciello/Abril car completed a second race win of the weekend to ensure AKKA ASP the 2019 Blancpain GT World Challenge Europe teams’ title. The French squad took four race wins across the season, with three for the #88 Mercedes-AMG and another for the Silver Cup machine of Nico Bastian and Thomas Neubauer, who claimed overall victory at Brands Hatch.

The #63 Lamborghini held firm in second while Stolz took third in the #4 Mercedes-AMG. When Mapelli crossed the line in fourth, the FFF garage erupted into jubilant celebration. The team had clinched the Blancpain GT World Challenge Europe drivers’ crown by the smallest possible margin, finishing level with Black Falcon on 92.5 points but triumphing in a race-wins countback.

There was even more reason for the squad to celebrate, with Hiroshi Hamaguchi and Phil Keen clinching the Pro-Am title with another class victory in Sunday’s race. The #519 Lamborghini duo had been on the cusp of the championship before the deciding contest, knowing that only the #333 Rinaldi Racing Ferrari could stop them from taking the crown. When David Perel was involved in a first-lap incident that eliminated his Ferrari, the FFF squad could relax in the knowledge that the Pro-Am title was theirs.

It marks a particularly impressive season by gentleman driver Hamaguchi, who had previously experienced just one of the five circuits visited by Blancpain GT World Challenge Europe this season. The Japanese racer has now secured back-to-back titles, having taken the Pro-Am crown in Blancpain GT Series Asia last year. The FFF squad also picked up the Pro-Am teams’ title, meaning they will leave Hungary with three championships secured.

The Silver Cup title was won by Bastian and Neubauer (#89 AKKA ASP Mercedes-AMG), who took second in the deciding race while the sister #90 machine of Felipe Fraga and Timur Boguslavskiy secured the final victory of the season. Bastian and Neubauer knew that second would be enough to capture the title and drove a measured race to take the crown. They crossed the finish line eighth overall, three spots behind the hugely impressive #90 car. Indeed, fifth overall represents a season-high Blancpain GT World Challenge Europe result for Brazilian ace Fraga.

The lone Am Cup machine of Florian Scholze and Wolfang Triller was 25th at the chequered flag, with their #444 HB Racing Ferrari finishing on the lead lap. 27 of the 28 starters completed the finale, with only the #333 Rinaldi Ferrari eliminated by its opening-lap clash.

Though the Blancpain GT World Challenge Europe campaign is settled there is one last date on the 2019 schedule, with the closing Endurance Cup race of the season taking place at Circuit de Barcelona-Catalunya on 27-29 September. There, the battle for the Endurance title will be decided, with both Black Falcon and FFF holding outside shots of beating the leading #62 SMP Racing Ferrari crew.

What’s more, Stolz and Engel will have a chance to avenge today’s title defeat as they go up against Caldarelli and Mapelli for the overall crown. The German drivers lead by just two points ahead of the decider, setting up another dramatic contest to conclude the 2019 Blancpain GT Series. 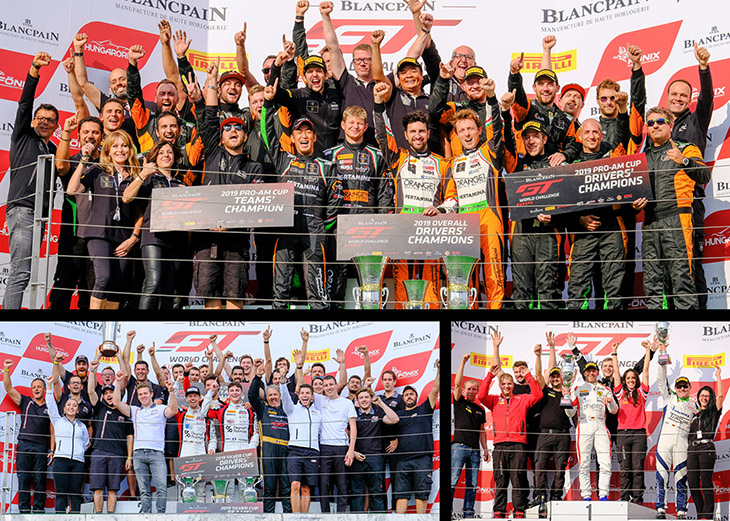 Andrea Caldarelli, #563 Orange1 FFF Racing Lamborghini: “After winning titles in Blancpain GT Series Asia last year we knew it would be very difficult to come back and compete in Europe. But we worked very hard, especially during the winter, and that’s why there is so much emotion today. I know how hard we have worked, not only as drivers but as a team as well. The guys played a huge part today with an amazing pit stop and they really deserve this title.”

Marco Mapelli, #563 Orange1 FFF Racing Lamborghini: “Fighting for the podium at every race is something that we can be very proud of. We have never been the quickest, especially in qualifying, but we have proven that we can win races and take big points. Now we will focus on the overall Blancpain GT Series title, but beating Maro and Luca is never easy. We will give our best in Barcelona!”

Luca Stolz, #4 Black Falcon Mercedes-AMG: “We didn’t lose the title this weekend, but at the Nürburgring with a pit stop error and some driving mistakes. This weekend was very good for us with second and third places, so we can’t complain. Still, it’s hard to be so close – level on points – and miss the title. We are disappointed right now, but we are still in contention for the overall and Endurance titles. We will push more than ever in Barcelona, especially as we won there last year.”

Maro Engel, #4 Black Falcon Mercedes-AMG: “We were very consistent, as we were only outside the top-four once all season. But we had the drive-through penalty for a pit stop infringement at the Nürburgring and we know it cost us the championship. Still, we win and lose as a team. None of us were perfect last weekend. Congrats to Marco and Andrea as they had a great season in Blancpain GT World Challenge Europe. We want to give them a good run for their money in Barcelona and take the overall title.”

Vincent Abril, #88 AKKA ASP Mercedes-AMG: “Our season was full of ups and downs. Consistency is the key in this championship, as we have seen with our rivals. You can’t have set-backs as we did at Brands Hatch and Misano. This weekend we didn’t think about a final podium in the championship, we just focused on ourselves, trying to have good pace in qualifying. We achieved that and had a great weekend with two pole positions and two victories. Let’s try to keep the momentum until Barcelona!”

Thomas Neubauer, #89 AKKA ASP Mercedes-AMG: “Honestly, we were very surprised after our victory in the first race at Brands Hatch. From there, we expected a lot for the rest of the season but I must admit it was tougher than we had thought. Still, our main goal was to win the Silver Cup during my first season in GT racing and I managed that, so I’m really happy.”

Hiroshi Hamaguchi, #519 Orange1 FFF Racing Lamborghini: “This season has been tiring as I fly from Tokyo for each race and then go back to the office as soon as possible after the weekend! I wanted to show that Asian amateur drivers can be competitive in Europe. The team and Andrea helped me a lot, especially as I only knew the Hungaroring before the start of the season. All the other tracks were new to me so I had to learn a lot. That’s why my best performance was always in race 2.”