It was a nail-biting finish to Race 2 at Silverstone, with the car crossing the line first knowing full well that the win wasn’t going to stand after an earlier penalty.

That sealed the perfect weekend for Albert Costa and Giacomo Altoè, who took their second pole and second win at Silverstone at the wheel of the #63 Emil Frey Racing Lamborghini, the Spaniard and the Italian taking a 17-point advantage in the overall standings ahead of the two final rounds of the season.

Frederik Schandorff and Tuomas Tujula scored their second success in Pro-Am, at the wheel of
the #66 VSR Lambo, while Miguel Sardinha-Antonio Da Costa (#99 Sports&You Mercedes) doubled up on their Saturday Am win.

Albert Costa was well in control from the pole at the start and led ahead of Grenier, Crestani, Chaves, Rueda, Onslow-Cole, Turner, Visser and Tujula.

The situation was stable in the opening laps, the Lamborghinis pulling away a little. Tom Onslow-Cole was pushing on but had an uncharacteristic spin in the #20 SPS AMG and dropped to P14.

The gaps stayed close in the group chasing the Lamborghinis ahead, with the first six covered by 10 seconds by lap 7. Matt Griffin made early progress in the #21 Spirit of Race Ferrari and climbed up to 7th, passing Zampieri, Tujula and Visser. Cipriani led in Am.

In lap 10, there was contact between Giammaria and Leo in their fight for 12th, with the latter
having to pit shortly after.

In the lead though, Costa was cruising with an 8-second advantage on the competition, still led by Frenier, Crestani, Chaves, Rueda, Turner and Griffin.

The end of lap 11 saw the pit window open and after the cycle was completed the positions had switched around, with Saravia leading in the #17 McLaren but with Altoè right on his heels.

Kodric was third in the second (#59) Teo Martin 720S GT3 third, only 3 seconds behind, together with Siedler, followed a couple of seconds behind by Wilkinson, then Ramos and Cameron. 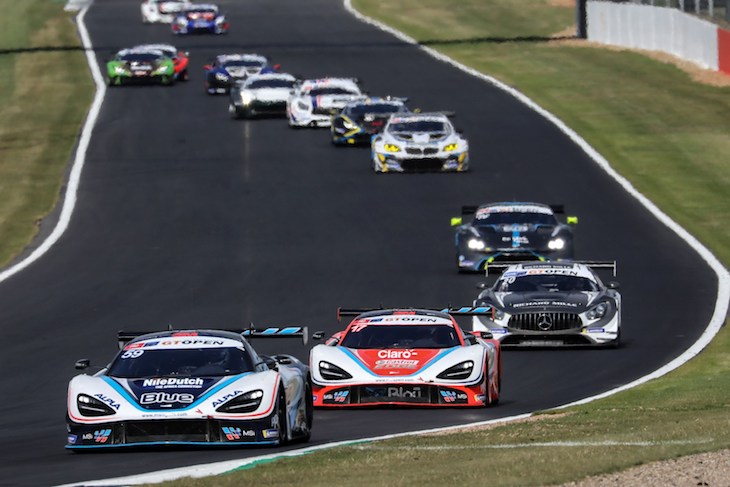 The battles for first and third were intense, the McLarens holding off the Lamborghini chargers.

Ten minutes from the end, Saravia was served a 1-second penalty (to be added to his time) having served the entire pit stop handicap.

That made the end of the race a real nail-biter with the McLaren man looking for a way to stretch his advantage from the mere tenths that Altoè, the Lamborghini man too fully aware of the penalty, was behind. Traffic looked like it might play a part but the Huracan man was cool-headed to the line and stayed within a quarter of a second to claim the win.

There was though lap drama as the second Teo Martin McLaren in the hands of Kodrić, running third, slowed dramatically and was sandwiched in the Complex between Siedler and Wilkinson, both looking to get by.

Spotting the opportunity, Ramos joined the trio in the #10 SPS AMG but miscalculated badly and hit the McLaren, spinning the 720S around and collecting the #96 Optimum Aston Martin into the bargain completing a luckless weekend for the Optimum squad on home ground!

Norbert Siedler would come through the chaos in third in the #14 Emil Frey Lamborghini, a near perfect weekend for the Swiss squad, ahead of Visser in the #3 Senkyr Motorsport BMW M6 GT3.

Ramos received a 10-second penalty which, perhaps surprisingly kept him ahead of the car he hit on adjusted time! Kodrić and Wilkinson came home a delayed sixth and seventh after the clash! 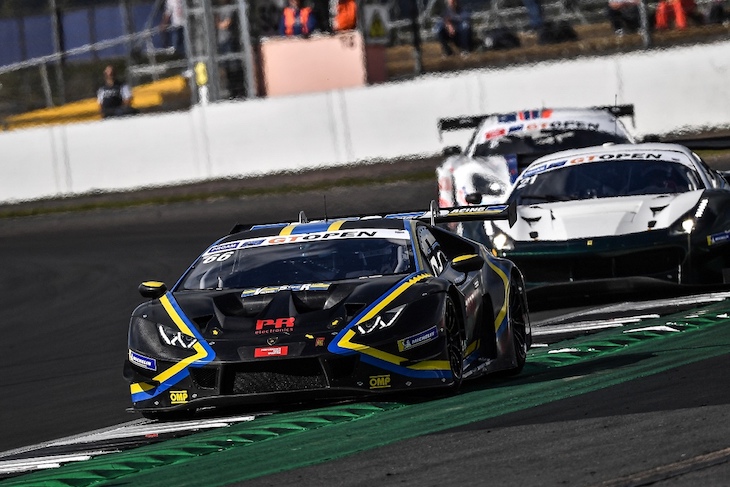 It was a second success of the season in Pro-Am for the VSR Lambo of Schandorff-Tujula as they came home ninth. A lonely Sardinha won in Am.

STANDINGS AFTER ROUND 10 OF 14