The #22 crew, who still have an outside chance at taking the championship, will be looking to score the car’s debut victory in the series on Sunday, following a series of visits to the podium in recent rounds.

Lining up alongside them on the front row will be championship leaders Adam Balon and Phil Keen, with their combined time of 2:54.996 getting the #72 Barwell Lamborghini into P2.

On the second row, Ian Loggie and Calum Macleod will start third in the Ram Racing Mercedes, with Macleod setting a fast time late on in his session after his earlier efforts were deleted for track-limits violations.

They’re joined by fourth-place qualifiers (and championship contenders) Graham Davidson and Jonny Adam in the #47 TF Sport Aston Martin. The third row is an all-Century-BMW affair, with the #9 Silver Cup entry of Angus Fender and Jack Mitchell qualifying ahead of the #3 entry of Dominic Paul and Ben Green.

Second in the championship but seventh on the grid is the #69 Barwell Lamborghini of Sam de Haan and Jonny Cocker, ahead of the Neary/Christodoulou Abba Mercedes in eighth.

Mark Farmer and Nicki Thiim in the #2 TF Sport Aston and Michael Igoe and Dennis Lind in the WPI Lamborghini, complete the GT3 top 10. 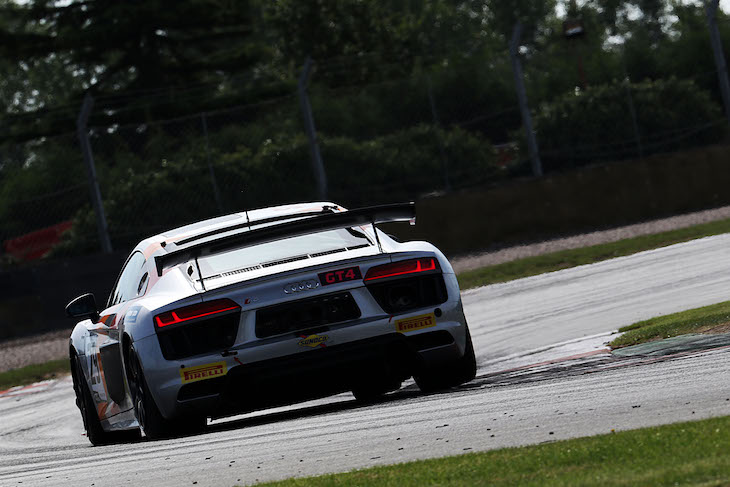 GT4 pole went the way of Richard Williams and Sennan Fielding in the #29 Steller Performance Audi, with a combined effort of 3:09.671. Williams set the fastest time in the opening ‘Am’ portion of qualifying, with Fielding backing that up by going third-fastest in the ‘Pro’ part.

Second and third places on the grid are occupied by the cars that are first and second in the overall GT4 points standings respectively: the #97 TF Sport Aston Martin of Ash Hand/Tom Canning and the #57 HHC McLaren of Callum Pointon and Dean MacDonald. Just 0.047 seconds separated the combined times of each car in the end.

Fourth on the grid is the second TF Sport GT4 entry, the #95 of Patrick Kibble and Josh Price, ahead of championship contenders Seb Priaulx and Scott Maxwell in the #15 Mustang, who have no additional pitstop time penalty to serve on Sunday. The top six was rounded out by the #75 Optimum Motorsport Aston Martin of Mike Robinson and Patrik Matthiesen.

Pro-Am pole position (and 11th overall) went to Pro-Am championship leaders Kelvin Fletcher and Martin Plowman, but the second-place qualifier in the class, the #20 Balfe McLaren of Johnson/O’Brien, was just 0.071 seconds in arrears.