Donington Park is basking in something of an Indian summer for British GT’s second visit of the season to the Leicestershire venue, with temperatures set to exceed 20 degrees on both Saturday and Sunday.

The overall GT3, team GT3, overall GT4, team GT4, Pro-Am GT4 and Silver Cup GT4 titles are all up for grabs this weekend, with only the Silver Cup GT3 result having been put beyond doubt last time out at Brands Hatch, clinched by Optimum Aston Martin duo Ollie Wilkinson and Bradley Ellis. 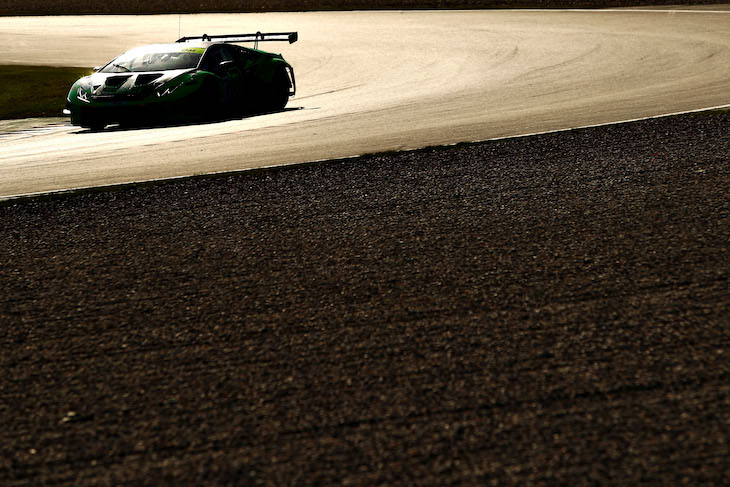 GT3 championship leader (with co-driver Phil Keen) Adam Balon was in typically relaxed mood in the Barwell Motorsport Lamborghini garage early on Saturday morning. “It’s all about the race this weekend for me, I just want to have a good one,” he declared.

“I didn’t expect to win a race or be leading the championship in my first year of GT3; it’s been more eventful than I expected, that’s for sure! I’ve made mistakes, too, and learned a lot. I think I need another year before I can start thinking about Le Mans, which I’d love to do.”

Balon and Keen’s biggest rivals for the title are their own team-mates Sam de Haan and Jonny Cocker in the #69 Lamborghini, plus Johnny Adam and Graham Davidson in the #47 TF Sport Aston Martin.

“I don’t see the 20-second pit penalty from Brands as a big problem,” Davidson told DSC. “If we have a good, clean race, I think there’s enough else that can happen in the race to cancel it out. I don’t know if this title is a ‘must-win’ for me, whether I’ll want to come back next year or not; I haven’t really thought beyond this weekend yet, I’ll have to see how I feel.” 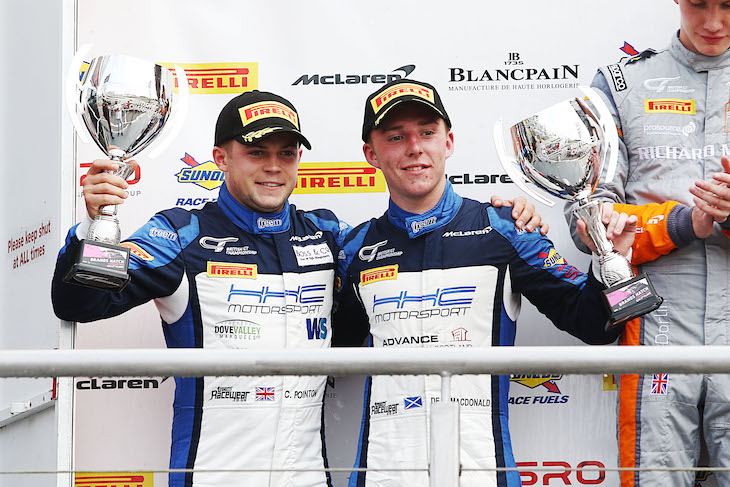 In GT4, HHC McLaren man Dean MacDonald and his co-driver Callum Pointon (above) are poised in second position in the standings coming in to this weekend, 8.5 points off the leaders, TF Sport’s Ash Hand and Tom Canning.

At this meeting last year, MacDonald was driving a Century BMW, but due to in-season driver changes, only his co-driver that weekend Jack Mitchell was in contention for the title, which he duly clinched.

“I’m just thinking about this weekend, we’ll just keep doing what we’ve been doing all year so far,” MacDonald said of the gap to the leading TF Sport crew coming into Donington. 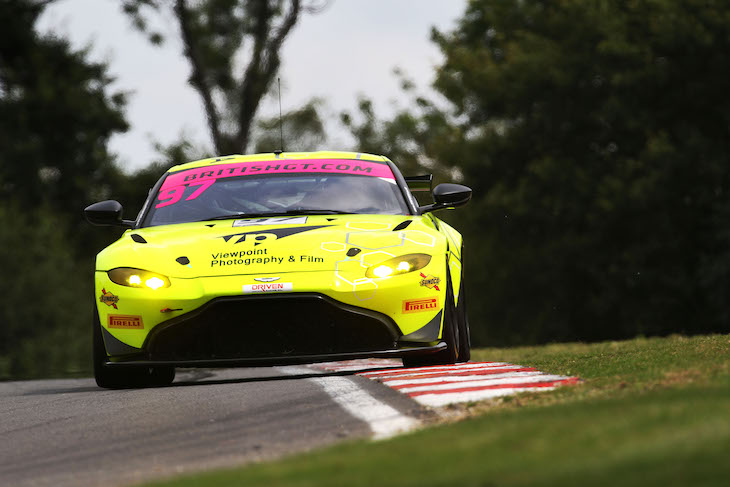 Hand, for his part, says that he and Canning are looking extend, rather than defend, their 8.5-point lead in Sunday’s race, and says the repeat visit to Donington throws up a different dynamic to the June race at the same venue.

“It’s closer this time around, as everyone’s got their setups sorted,” he told DSC. “That’s good for us, as there are people in the mix now who weren’t before, and they can take points off our rivals. 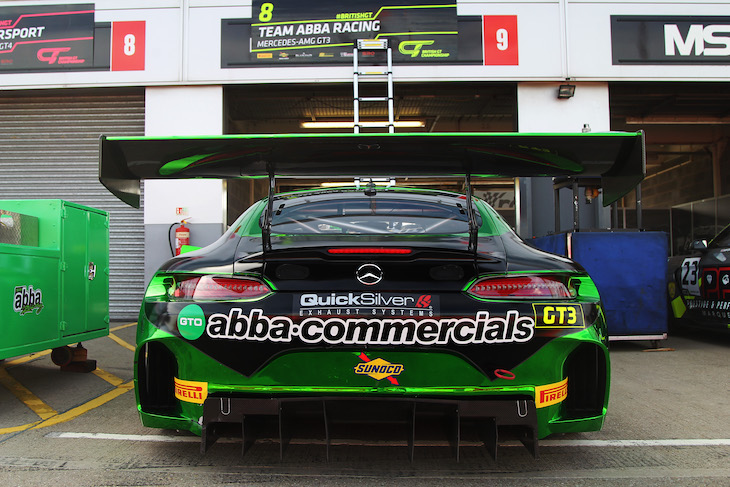 Back in GT3, the Abba Racing Mercedes (above) has been working hard to earn its keep this season, being raced by Richard Neary and either Adam Christodoulou or Tom Onslow-Cole in British GT and also being used in Britcar and GT Cup races by Neary and his son Sam.

Speaking to DSC on Saturday morning, Neary said he hopes to move Sam up to British GT in 2020. “We’ve applied to the FIA for a grading for him, so we’ll see what comes back,” he said. “If it’s silver, he’ll need another silver to race with, so I’ll share with him, if it’s bronze, we’ll probably put him in with Adam. Either way, the car will be on the grid.” 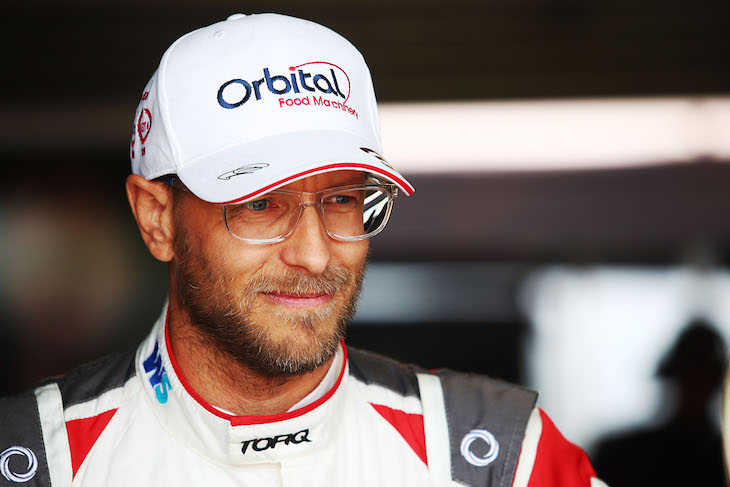 In the JRM Bentley garage, DSC caught up with 2017 British GT champion Rick Parfitt Jr, who this time last year announced his retirement from racing, before ‘unretiring’ in time for the start of 2019 and a reunion with his title-winning co-driver Seb Morris.

Apart from a much-valued win at the Oulton Park season opener, it’s been a tough season for the duo, but Parfitt feels progress has been made. “We’ve been developing the car and learning it all year,” he told us. “We’re on a tight budget, so testing and track time has been at a premium; the car has caught me out once or twice, which I’d probably have avoided with more seat time.”

Budget isn’t the RPJ Band frontman’s only challenge, however; he’s spoken openly in the past about living with Crohn’s disease and his determination for it not to prevent him leading his hectic life of live music and motorsport.

“I love the JRM team and the British GT paddock, I love being here and want to be back. But right now with my Crohn’s, I’m racing through the pain, taking painkillers and suffering with chronic fatigue,” Parfitt explained.

“I have to go away and have a think. I have a meeting with my surgeons over the winter, I need a big operation with a two or three-month recovery time, so I have to put my health first. For 2020, we’ll see.” 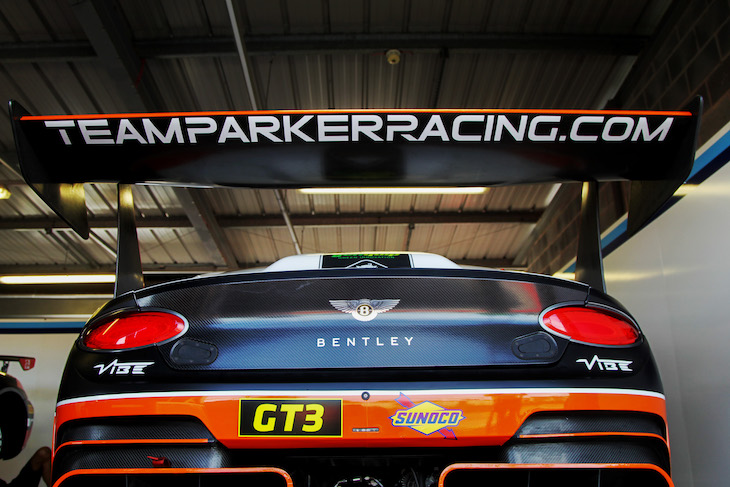 Over at Team Parker Racing, DSC caught up with Bentley’s recently appointed new Customer Racing boss Tom Hodgson, formerly a technical manager and race engineer working with Bentley customer teams in the US.

“We need to make the GT3 programme work better, we need to win the big races like Spa,” he told us. “That really makes a difference to the people who are buying the cars. We’re not going to be an Audi or Mercedes, selling hundreds of cars, instead, we’re looking for people who want to do something a bit different.”

Hodgson says he has five or six potential prospects for 2020 in various series under discussion, including some looking to run the first-generation Continental. Although he says he’d “love” to create a GT4 Bentley, he admits it wouldn’t be feasible with the Continental.

“We have to do so much to the road car to turn it into a racer, and there’s less scope to change things in GT4, so it wouldn’t work. GT2 is interesting, though, but I want to get the GT3 programme to where it needs to be before we’d look at that.” 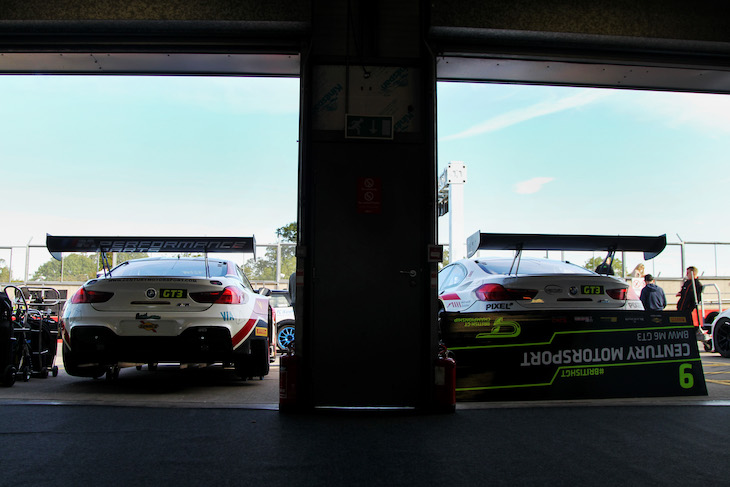 There was a late change to the Century Motorsport (above) driver roster for this weekend, with Mark Kimber unable to see out the season in the #42 GT4 BMW and replaced at the last minute by Irishman Niall Murray, who previously raced for the team at Brands Hatch and Donington in 2017, when it ran Ginettas.

Team boss Nathan Freke is also on driving duty again this weekend alongside Andrew Gordon-Colebrooke in the sister #43 BMW. “It’s been a busy season with the four cars and the results haven’t been what he hoped for,” Freke told DSC. “We’re still learning about the GT4, as is BMW really, but we have full support from them and the intention is to be back with two GT3s and two GT4s in 2020.

“The M6 isn’t the newest GT3 model, granted, but it’s still a current car, so Balance of Performance should keep it competitive. One was on pole at the Suzuka 10 Hours and it’s still winning races out there. We know it’s not the easiest car to drive; the harder you push it, the slower it tends to go, so it demands a very particular driving style. But we’re learning it and the drivers are learning it.”