Temperatures today and tomorrow are predicted to be cooler than they were yesterday. And Joao Barbosa thinks the cooler temperatures that are predicted for race day will help most of the teams around the track as tyre wear will be a crucial part of the race.

“I think it’s going to be better for everybody, there might be a little bit less [tyre degradation], but I will say it’s a high degradation track here,” Barbosa said. 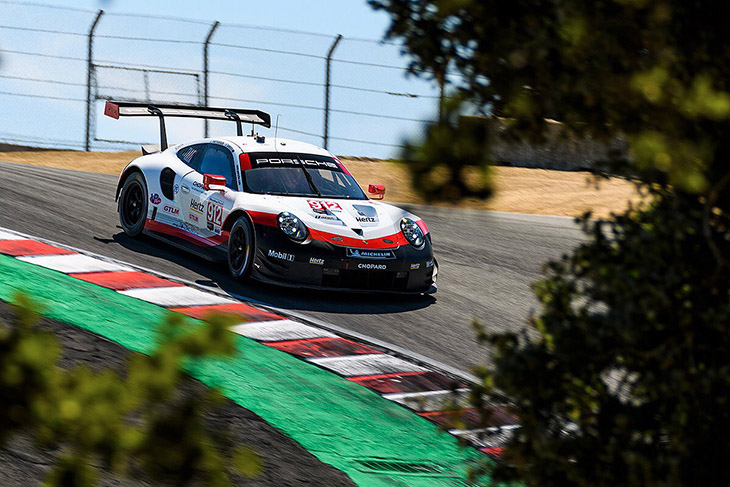 “There might be a lot of strategy going into play with new sets of tyres, because there’s quite a big gap between a really old set and the new set,” Barbosa added.

IndyCar rookie Santino Ferucci was spotted in the paddock speaking with AIM Vasser Sullivan’s Townsend Bell and taking in the sight of the Lexus RC-F GT3. Bell, when not in the IMSA paddock with Lexus, is part of the NBC Sports commentary team for the IndyCar series, which has their season finale next weekend at Laguna Seca.

Heading into qualifying for the Weathertech Sportscar Series, Lamborghini holds onto three out of the four fastest laps all weekend in GT Daytona. Magnus Racing’s Andy Lally told DSC he was particularly pleased with the results so far, especially considering the #44 Lamborghini Huracan has not yet done a qualifying simulation and are still right on the tail of the #48 Paul Miller Lamborghini who has.

“We haven’t done a mock qualifying run yet, but our race pace on full tanks has been awesome,” Lally said.

Adding that he was “ok” with being just beaten by the #48 Lamborghini crew because he knew “where they were on fuel and tyres at that point.”

The fastest GT Daytona time of the weekend is still held by Robby Foley in the #96 Turner Motorsports BMW M6 GT3. His time of 1:24.523 from Free Practice 3 is two-tenths of a second quicker than the next best time.

Galante On The Fight To End Alzheimer’s

Michelin Pilot Challenge Audi TCR man Nick Galante was pioneering a small exhibition tent for Fast MD Racing and Racing to end Alzheimer’s. Galante told the story of how he got to know Philip Frengs, the founder of Racing to End Alzheimers while he was a caddy at Pebble Beach Golf Course. 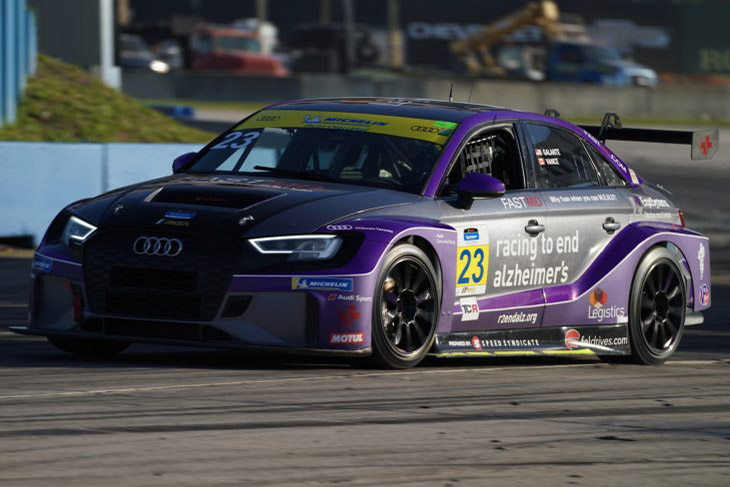 “He’s playing golf, and we hit it off. He goes, ‘why are you here?’ I said I’m here to start learning how to race cars. He said, ‘race cars, what are you talking about?’ So we stayed in touch, and I would always caddy for him when he came back. And then my racing started getting more developed and he started helping me out with this company. And then he said, ‘you know what, I want to start an Alzheimer’s charity.’” Galante explained to DSC.

This relationship, which began some 15 years ago, eventually developed into a close bond between Galante, Fast MD Racing, and Racing to End Alzheimer’s.

Anyone interested in donating to the fund is encouraged to go the website r2endalz.org. All donations are doubled by a secret donor. Galante also made clear that all of the proceeds go towards the charity and its medical work, none of the donations go towards the racing programme.