The #33 Winward Racing Mercedes-AMG GT4 of Dominik Baumann and Russell Ward claimed victory at Laguna Seca following a bold strategy call that slingshotted the #33 Mercedes to the fore of the field.

The crucial moment in the race came during the second pitstop cycle when the #33 Mercedes crew opted to take just rear tyres, a bold move considering the tyre degradation difficulties that drivers have been dealing with all weekend. With most of their competitors choosing to take four tyres, the two tyre called allow Baumann to leapfrog into the eventual winning position.

“The team did an awesome job!” Ward said. “We took rear tyres only on the pitstop and our car was really good over the distance,” Ward added.

The championship-leading #39 Carbahn Motorsports Audi R8 of Jeff Westphal and Tyler McQuarrie ended the day in second. Westphal made a late-race pass on the #7 Park Place Motorsports Porsche Cayman to secure the second step of the podium.

While Park Place’s day in GT Daytona ended with a significantly damaged 911 GT3 R, their Michelin Pilot Challenge crew faired much better. Alan Brynjolfsson and Trent Hindman with Hindman pulling off a monumental 42 lap stint to bring the car home on an economy run.

In the run-up to this weekend’s race at Laguna Seca Roadshagger Racing’s partner, eEuroparts had to shutter their doors. Instead of skipping the final two races of the season and ending on a low-note, they grouped together some of the mechanics, rented a trailer, gathered some spare parts, and went to Laguna Seca. 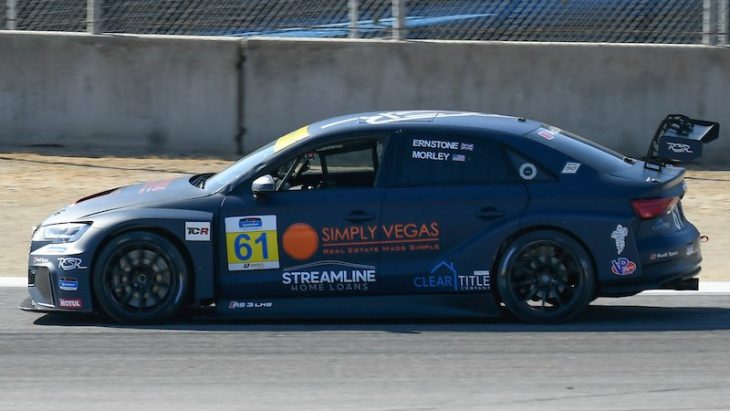 With the might of Bryan Herta Autosport and Hyundai, the team that had shown dominating pace all weekend, breathing down the neck of Jon Morley in the race’s final laps, he crossed the line. With a car length and nothing more to lend Morley and Gavin Ernstone led the battered and wounded Roadshagger Racing to a win.

“I couldn’t watch for the last half hour, I couldn’t look at a monitor, I couldn’t look at the team, I didn’t want to know anything,” said an exasperated Ernstone. “We know the difficulties we’ve had in the past few weeks and I couldn’t be prouder of this team. This is one of the best, best, days of my entire life!” Ernstone said.

The aforementioned #98 Bryan Herta Autosport Hyundai Veloster N of Mark Wilkins and Michael Lewis ended the race in second after running out of time to catch the #61 Audi. The #98 Hyundai had led the race early on and so to did their teammates in the #21 Hyundai Veloster N, so a second place will be tough to swallow.

Rounding out the TCR podium was the #37 LA Honda World Civic with Tom O’Gorman and Shelby Blackstock.

There were two Full Course Yellows during the race. The most significant incident involved multiple GS cars at the top of the corkscrew. With the GS field bunched together after a restart, they climbed the hill to the corkscrew at three and at one point four wide. This obviously did not go well, and while clear camera angles were sparse, it appeared the #40 PF Racing Ford Mustang of Jade Buford was turned the #75 Compass Racing McLaren 570s of Kuno Wittmer.

This initial contact sent the #40 Ford spinning to the right where it then mounted the front of the #92 Ramsey Racing Mercedes-AMG of Mark Ramsey. The right wheels of the #40 Mustang were a handful of feet off the ground but the car landed with its four tyres on the track.

The #92 Mercedes and the #40 Ford were both nursed back to the pits and were then taken behind-the-wall. Meanwhile, the #75 McLaren was unable to do the same and it came to a stop at the bottom of the Cork Screw where Wittmer was assisted by the IMSA safety crew.

The same return to green saw the #69 MIA McLaren shuffled and barged back down the order from a leading position though Jesse Lazare’s late-race charge back up into the top 10 by the flag was another standout performance.

The Michelin Pilot Challenge is back in action for the season finale at Road Atlanta on October 9/12, the same weekend as Petit Le Mans.