UPDATE: The top three finishers in LMP3 were disqualified overnight for technical infringements meaning Lanan Racing was declared the winner. Read about it HERE >>>

GRAFF Racing’s #39 Norma M30 of Adrien Chila and Nicolas Schatz took their second win of the season today at Spa, after a penalty in the second half of the race cost DKR Engineering’s Francois Kirmann and Laurents Horr a win.

In the end the winning margin for the GRAFF duo was 4.8 seconds over the Nielsen Racing Norma of Tony Wells and Colin Noble.

“I’m very happy these races are very strong, Horr is very fast so I did my maximum in the Norm and it’s a big pleasure to win with Adrien,” said Schatz.

Noble was slowly reeling in Schatz at the end of the race, while defending from Horr who pushed the Scotsman to the limit in the closing laps. After the penalty for DKR, for spinning wheels in the pit lane, was awarded.

Kirmann in the first half of the race was dominant and opened up a comfortable lead, before a safety car period was caused for a blowout on the Kemmel Straight for the #74 Cool Racing Ligier towards the end of the first hour.

This negated DKR’s advantage, though Horr rejoined the race in the lead after the round of stops. Just when it began to look out of reach, the points leaders dropped to third with the penalty, meaning the title race will go down to the wire.

Horr and Kirmann’s title rivals, Lanan Racing’s Mikey Benham and Duncan Tappy, remarkably, finished fourth, despite Benham having multiple spins during his stint which dropped him down the order and forced him to spend much of his time in the car fighting back through the field.

The safety car played a huge role in allowing Lanan to get back into a strong position, Tappy emerging fifth after the stops before climbing to fourth.

In championship terms, Horr and Kirmann with their third place finish, are now 20 points clear of Colin Noble and Tony Wells, who despite having no wins this season, now head into the finale with a chance at the title should disaster strike the DKR duo.

In GT3 Kessel Racing took the victory, Giacomo Piccini and Sergio Pianezzola running a faultless race to score their third win of the season. In the end it wasn’t easy, Pianezzola’s early lead wiped out by the Safety Car, setting up a battle for the lead in the second half that hotted up in the closing stages. 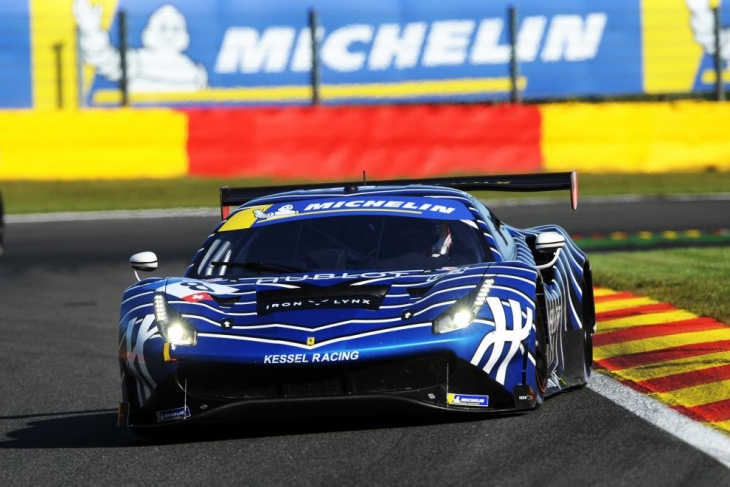 Ross Gunn in Beechdean AMR’s Vantage rose from third to second after the stops, allowing him to make a run for the lead. The FIA WEC full-season driver reeled in Piccini but couldn’t make the pass in the closing stages, finishing 1.2 seconds back by the end of the race.

“It was tough, normally my teammate gives me a big advantage,” said Piccini. “Because of the safety car the race was tough. That’s the best win we’ve had this year.”

Behind Gunn, Maurizio Mediani took third in the #51 Spirit of Race Ferrari, completing the podium.

It was a disastrous outing for title hopeful Luzich Racing, its Ferrari hit at La Source on the opening lap before suffering a puncture, dropping Mikkel Mac and Fabien Lavergne out of contention. They eventually went on to finish sixth, meaning the title race goes down to the wire. But, even if they win and get pole at Portimao, Kessel’s #8 duo can finish second and still win the title.