Rick Ware Racing’s Cody Ware was a guest of EuroInternational at the European Le Mans race at Spa last weekend.

And he took time out to talk to DSC about both of the programmes that the NASCAR team are about to embark upon in endurance racing. In LMP2 Am in the 2019/20 Asian Le Mans Series, and in next year’s IMSA Championship in LMP2.

There’s a longer version of our chat with Cody on this week’s Inside the Sportscar Paddock podcast.

Cody, some exciting stuff happening with Rick Ware Racing, you’re here as a guest of EuroInternational your partners in crime for the Asian Le Mans series. We’ve already seen pictures of you shaking down the first of the Ligier JS P2s for Asia. Tell us about that programme. Still two cars?

“We actually had both cars out on the runway at Le Mans testing. So both cars are prepped and going to be ready to get shipped out for the first race in Shanghai.”

Music to our ears 🎶

You’re going to be one of the drivers for this under the Rick Ware Racing banner. From what I understand the plans for the second car are more or less there, but not yet announced?

“Not announced. But we have a pretty solid idea of who the second lineup is going to be. And I think it’s going to be a pretty good lineup there. So we’re excited about that as well.” 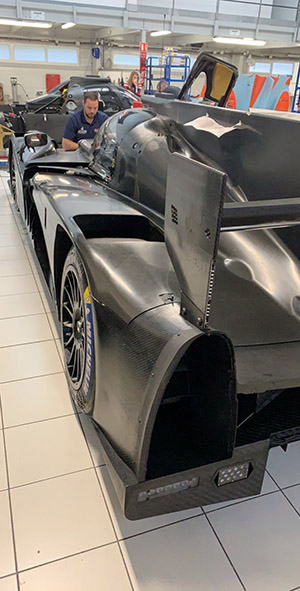 So from your point of view, it’s about a step into LMP cars for the second time after racing a PC car a few years ago?

“I would consider this my true first endeavour into prototype racing. You know, only having a weekend in a prototype challenge car, I wouldn’t amount to much experience. Obviously, you get a feel for the downforce and the type of racing you’re going to do. But as far as the technology in a true LMP2 car I think it’s very cool, but also pretty intimidating, coming from a background where the only button I have on my steering wheel is a push to talk. So it’s very exciting and intimidating at the same time.

“But I’m a racer. So I love the challenge and it’s not going to scare me away.”

So tell us a bit about about the appeal of the Asian Le Mans series. It’s four four hour races, great tracks, an odd sort of calendar this year with one race this year, then a long gap before we go down under to an exciting new venue for all of us, not just you, The Bend in South Australia. And then back to back races to finish the season. Is the appeal this kind of almost a soft landing into sports car racing, or is it the prize at the end for that championship? Which is a big one?

“Yeah, so I think it’s definitely a combination of both. First off, we had have had several people, including one of my co-drivers, John Graham, who will most likely be in the seat with me and the first P2 car. He has been over there and raced in Asia before and talked very highly of it.

“And we’ve also seen the growth in the series over the past few years both with European and Asian teams racing very competitively over there.

“And then also, like you mentioned to get the golden ticket into the 24 hours of Le Mans in June. And so both those reasons, as well as the fact that it is a soft landing into the prototype racing scene. Because as that season begins, our NASCAR season ends. So it’s a good chance for our engineers and crew guys to get a feel for the prototype racing without it being dead in the middle of all of our NASCAR racing.

“You know, in 40 weeks, we raced 36 races, so there’s not a lot of downtime as far as car prep goes. And so getting our race team on board and getting prepped for this level of racing, it would be very difficult during the NASCAR season. And so with the Asian series basically being over the winter, it really does provide a way for us to complete an entire series for a championship and a time that’s typically pretty slow for us normally.”

So it’s two LMP2 AM cars, the pre-2017 spec LMP2 cars in conjunction with Eurointernational. But that’s not the only programme in sports car racing, the one that at the moment there has been very limited information about. IMSA and LMP2.

“As of right now we are going to be confirmed in the P2 class for the North American Endurance Championship races with a Multimatic Riley P2 car. And as of right now, I’m the only confirmed driver. But we do have some sponsorship from Jacob companies, who is our full-time sponsor on the #51 Cup car and NASCAR.

“Don Perry, who’s the owner of Jacobs, was wanting to branch out into other types of racing from a hospitality and competition standpoint, so IMSA was a good move for that.

“Brian Alder, who obviously you’re familiar with, had a car for sale and we were able to obtain it. And the goal is to be testing that thing by the end of October so that we can have it shook down and ready for the roar and Daytona in January. 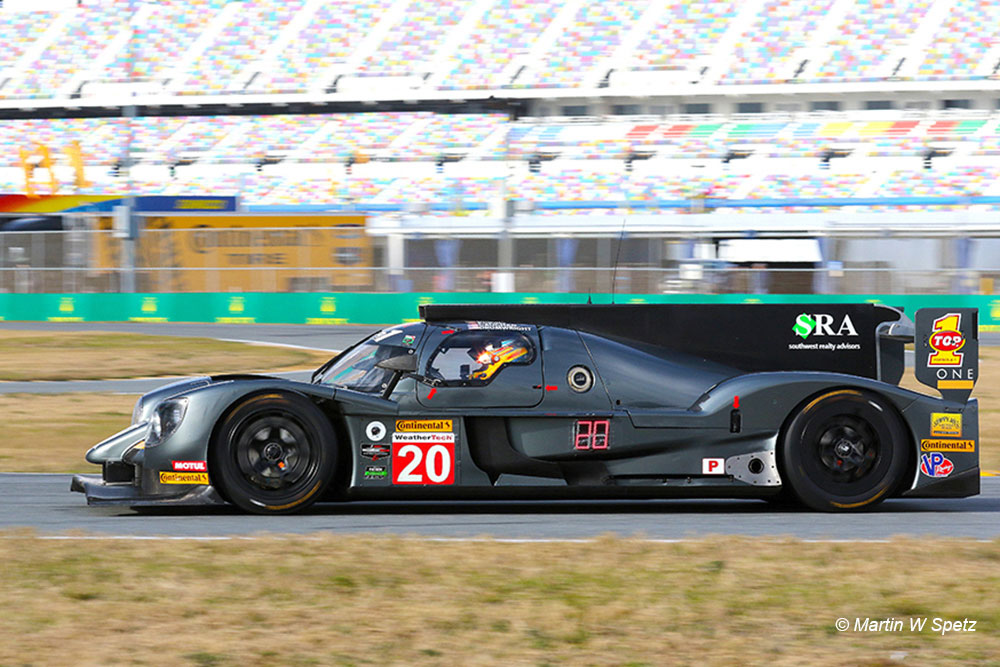 “For IMSA it’s going to be a solely Rick Ware Racing adventure, we’re going to be running probably three to four of our own crew members in house as well as one to two of our own in house engineers. And then we will be getting hopefully some support from Multimatic obviously they’re running the Mazda DPI programme right now. We’re in talks and works and we’re getting a pretty solid idea that we’re gonna be able to get some technical alliance with them, which will be huge, but on the on the stateside programme definitely going to be just us trying to get it sorted all out and figure out how it goes.”

“I think from a competition standpoint, I’m excited to be venturing into series where we’re not fighting for a 25th or 30th place finish.

“In my brief time in sports cars, I had a good bit of success for several race wins and podiums in Porsche Cup and Super Trofeo and things like that. And so it’ll be nice to get back into a form of racing, where I can truly go out there with the mindset and a mentality of winning and going out there with success.

“I think that both in the Asian Le Mans series and in the IMSA series that we have, with Antonio in Asia and with our NASCAR set up in the States, I do believe that we can build a competitive programme both overseas and stateside.”

There are two major disciplines are different from NASCAR, to sports car racing. One of them is that compromise that comes with sportscar racing, you’ve done a bit of that before. The other one is a very different scale and the challenge of traffic. Are they some things you’re looking forward to really shortly things you’re going to think, not quite sure this one’s going to pan out.

“I expect the unexpected. And I think the more variables a race has, the more interestingly it plays out. I think that not only as a driver but the engineers and the whole team get to enjoy the race more as strategy plays more of a part, you know.

“In NASCAR, we pretty much know how the race is going to play out as soon as the green flag drops, but you head to a sports car race and a full course yellow comes out or a safety car comes out and that could drastically change how you’re going to operate the race between driver changes, fuel stops and pit stops, tire changes etc.

“I think that it has a lot more excitement to it. And so it’s something that I’m going to enjoy and soak in. And I just think it’s going to be just overall a really, really fun adventure.

But tell me philosophically, where are you as a driver? Where are the team in terms of where this might lead to in terms of perhaps a second programme? Would it ever be a replacement programme for what you guys are doing?

“I’d say that replacement no. NASCAR is definitely a major backbone of our income in our business and racing. And so you’ll always see us as a stable name in the NASCAR garage. But this is definitely us making a statement that we are trying to move forward with not just NASCAR but with other series.

“And so the goal very much not just for me as a driver but for us as RWR as a team is to grow not only in the States but internationally as a sports car brand. And so I guess you could call it somewhat of Rick Ware Racing International that we’re trying to really make our foothold into not only prototypes but into the sports car racing scene again. I think that a lot of people will be surprised at some of the stuff that we have planned for next year that hasn’t been announced yet.”

So I think the final question for me is around that choice of the LMP2 car.

It will be a unique car, In LMP2 there’s something like 30 cars racing around the world and you will have the only active Multimatic Mark 30 in racing.

There are lots of what-ifs, it could be actually at some tracks a dominant force that’s happened before with an unknown quantity. It could be that actually what you find, as you have told me, with a lot of engineering has gone into the car already with some of the issues having been found and resolved from those encountered by Brian and the BAR1 team at Daytona. But what if you get out there, and the car is not what you hoped?

“I’d say it’s part of the learning curve. Obviously, we go out there with the mindset and mentality of being prepared to win and podium and to have success. But also, we know that in our maiden year that it’s not going to be all rainbows and sunshine. And I think NASCAR is good preparation for that for anybody.

“If you can battle the ups and downs and how topsy turvy, NASCAR can be on any given weekend, I think that even the struggling weekends in IMSA will be tough, but we’ll still take something away from it. And I think that’s something that NASCAR has prepared us for.

“We see disasters on a weekly basis in the Cup garage. And thankfully, we have a good support system of knocking those out and eliminating them as quickly as possible. So to expect nothing but success or even just a problem-free season I think would be unrealistic. So I think we’re expecting the unexpected, and I believe that we’ll be able to take it in stride.”