Hedlund, driving the #43 RealTime Racing Acura NSX slotted into 5th overall and in the lead of the Pro/Am division over Anthony Imperato in the #91 Wright Motorsports Porsche 911 GT3 R (991).

Serra then went to work building a 6.3-second lead over Long heading into the pit window with 50 minutes remaining in the 90-minute race. With the window open the first of the lead pack to come onto pit road included Soucek, Hedlund and Imperato.

The RealTime team executed a seamless stop and Cameron now assuming the controls of the #43 machine exited ahead of Matt Campbell who took over for Imperato.

Serra then brought his Ferrari in with 45 minutes remaining and the R. Ferri Motorsport team executed a flawless stop ensuring that Vilander re-entered the race with the #61 machine still in the lead.

With the pit window closed and action focused entirely on track, Parente now in control of the #9 Bentley passed his K-PAX teammate Soulet in the #3 Bentley, while Vilander held a 5.5 second lead over Hargrove.

The leaders held their positions through lap 35. Then on lap 36 Race Control issued a full-course yellow to remove a disabled car sitting in turn 11.

With the car removed, the race resumed with five minutes left on the clock. Vilander launched successfully into the lead on the restart while Parente dragged past Hargrove and into second through turn 1.

Cameron maintained his lead in Pro/Am while behind him Pro/Am championship points co-leader Kyle Marcelli in the #80 Racers Edge Acura NSX duelled with Campbell for second in the class.

Then on lap 39, Parente dropped back as his #9 machine suffered what appeared to be a mechanical issue through turn 9. Cameron who had charged up into third in the subsequent laps after the restart then slotted into second with Hargrove in third.

“The mindset changes a little bit when you’re in the lead of the championship so instead of going into the race flat out there’s a bit of a margin and the mindset is to not make a mistake,” said Vilander. “What an incredible performance by Daniel, being his first time here. I’ve been here five or six times and I still struggle. I wasn’t happy to see the safety car at the end, but there were some lap cars in between so I knew if I was awake at the restart and did a clean lap, I should be able to pull away and I could see in the mirror that there were so many cars close together and knew there was going to be some special action. For us it was a really good day, I can confirm I’m happy.”

“It was a tough race, but Mike did a great job on his stint, not making any mistakes and coming in the lead,” said Cameron.

“Great stop by our RealTime boys. I had a lot of pressure at the beginning of the stint from (Matt) Campbell, he had a little bit of pace in a few spots so I thought if I could stay ahead long enough that he would lose the tires. And then I wasn’t actually that happy to see the caution because I had just gotten free from him and there were only a couple of minutes left so kind of finally exhaled and then we had the restart and lap cars up there and I think everyone’s car was different on used tires so it got pretty rowdy there at the end. I then knew I needed to get cars between me and all the other Pro-Am guys so I didn’t care what it was or what colour it was I was just going to try to go by it and get away from the Pro-Am guys and protect myself especially when Campbell was really good on the brakes. It’s cool to get second overall and Road America is cool. Great to get the 99th career win for RealTime Racing as a team and for Peter (Cunningham) at their home track. Now we look for the 100th win tomorrow.” 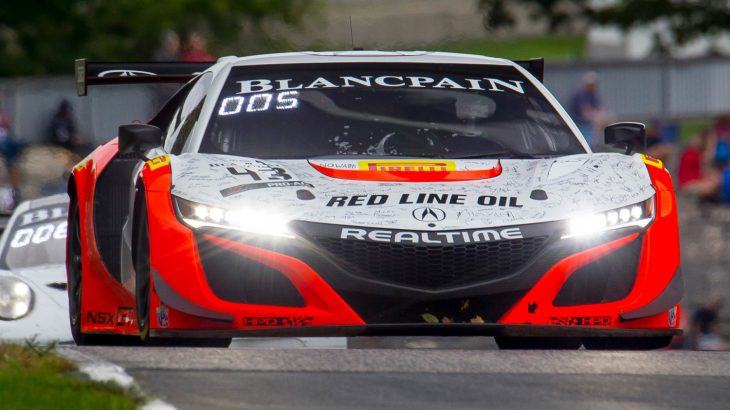 The 90-minute contest was held under threatening skies and damp track conditions after the rain had fallen on Road America for much of the morning and early afternoon. At the drop of the green, second-on-the-grid Cameron, piloting the #43 RealTime Racing Acura NSX drag raced pole sitter Kyle Marcelli in the #80 Racers Edge Acura NSX into turn 1 and deftly took the outside line and into the lead.

With Marcelli slotting into second, Pro/Am Division driver Matt Campbell in the #91 Wright Motorsports Porsche 911 GT3 R (991) settled into third, while Pro Division driver Alvaro Parente in the #9 K-PAX Racing Bentley Continental GT3 rocketed up from his sixth starting position and into fourth. Ryan Dalziel in the DXDT Racing #63 Mercedes-AMG GT3 slotted into fifth with Vilander, driving the #61 R. Ferri Motorsport Ferrari 488 GT3 shuffling back from his fifth on the grid starting position and into six. Am division pilot Takuya Shirasaka in the #96 Turner Motorsport BMW F13 M6 GT3 slotted into 12th overall.

Cameron then set sail building a more than five-second lead over Marcelli leading up to the pit window with 50 minutes remaining in the contest. The lead group all held their positions as the pit window opened. Cameron was the last competitor onto pit lane handing the reins over to Hedlund. When the window closed, Hedlund maintained a three-second lead over Barkey who had taken over for Marcelli, with Anthony Imperato who had taken over for

Campbell in third overall. Andy Soucek, who took over from Parente maintained fourth. Serra took over from Vilander and began pursuing K-PAX Racing’s Rodrigo Baptista in the #3 Bentley Continental GT3.

With Hedlund hitting his marks and maintaining the lead up from, the battle behind raged as Serra closed on Baptista battling for fifth overall. Barkey in second defended well against Imperato as Parente closed in on the Pro/Am competitors running in fourth. Late in the contest on lap 33, Parente moved around Imperato and into third overall and looked to close on Barkey. Meanwhile, Serra continued to look for a way around Baptista.

Then the DXDT Racing #63 Mercedes-AMG GT3 driven by David Askew slid off and into the barrier through turn 11. While Race Control issued a yellow and directed competitors to safety car speed, Askew was able to get his machine under power and proceeded to bring it into pit lane for repair. Race control issued a return to full green conditions and the front runners all returned to pursuing Hedlund. Serra though was able to maintain his momentum and it allowed him to vault up into second overall by lap 36.

Serra then pursued Hedlund for the overall race lead with under four laps to go, but the driver of the #43 machine put his head down, hit his marks and crossed the line .495 seconds ahead of the driver of the #61 machine. With the second-place finish, Vilander wins the 2019 Pro Division driver’s championship. Soucek (Parente) finished third and second overall in the Pro Division, Baptista (Soulet) finished fourth and third in the Pro Division. Barkey (Marcelli) finished sixth overall and second in Pro/Am, while Imperato (Campbell) finished seventh overall and third in Pro/Am. Am division pilot Naoto Takeda (Shirasaka) in the #96 Turner Motorsport BMW F13 M6 GT3 finished 11th overall.

After the race, Hedlund commented on RealTime’s 100 career series victory. “I didn’t even know Realtime had that many wins until after Sonoma and after that both Dane and I said to each other okay now there’s a little bit of pressure because that’s a big deal, especially if we were able to get it here at their home track so it’s kind of been the perfect weekend,” said Hedlund. “I can’t ask for anything more, the team did a really amazing job, we had no mistakes, pitstops were excellent, the car was good from the time we unloaded. Even with this questionable weather which mixes it up, everyone executed well, and we were able to get a win.”