The remainder of the 12 car entry featured a three-car GT4 field, and five Invitational cars completing the grid. The low entry numbers continue a decline in GT3 numbers throughout the season, with only 10 entries competing at the previous 3-hour endurance race at The Bend Motorsport Park.

Of those entries, the three Scott Taylor Motorsport Mercedes AMGs did not feature at Sandown, including the WM Waste #8 car of Max Twigg and Tony D’Alberto, who were second in the overall standings heading into the Sandown weekend.

The low entry count comes off the back of discontent from teams and competitors in the direction of Australian GT since a change in management mid last year. Concerns on the lack of ‘value’ in the current competitive environment are at the forefront of discussions, with Scott Taylor commenting in an interview for Speedcafe.com that “nine cars on the grid doesn’t have enough purpose” and that teams may search for opportunities elsewhere should participation not improve. At the Philip Island round of the championship in June, competitors requested a survey across the paddock to attempt to determine the decline in entries, with a further meeting held at The Bend in July.

The findings of the survey showed that responses to recently announced changes to the category for 2020, including a closer alignment to SRO competition regulations and the FIA driver grading system, were generally positive. However, opinions on how to grow the category were divided between a higher standard of competition and implementing further cost control. Responses also levelled criticism at the category for its communication performance, with a rating of ‘below average.’

While the survey findings provide a positive step towards the category for 2020, the format change to three 1-hour legs for the Sandown GT Endurance finale was not enough to entice further GT3 entries.

The #63 Eggleston Motorsport AMG outlasted the competition in the Australian GT Endurance Finale at Sandown Raceway, taking victory by a lap over their rivals. The Melbourne Performance Centre Audi duo of Geoff Emery and Garth Tander recovered from an early race mishap to finish second and with it the Australian GT Endurance title. Third place was the Trofeo Motorsport Huracan driven by Liam Talbot and Joe Ensabella; their second podium in succession. 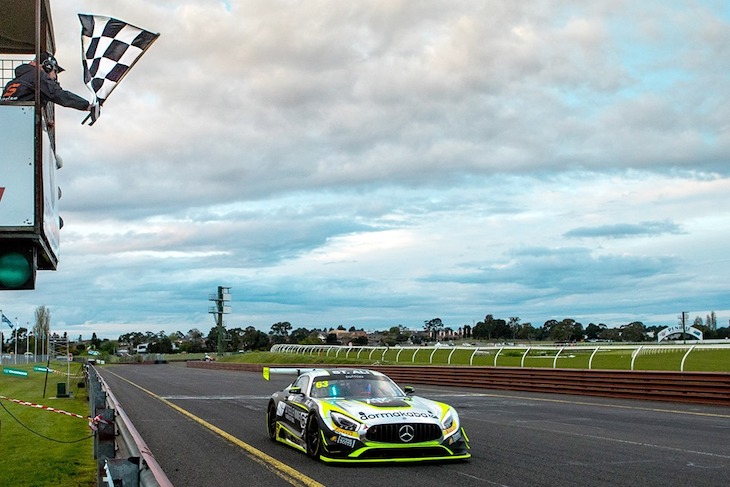 Sandown, situated in Melbourne’s south-east suburbs, played host to the final round of the Australian GT Endurance series, with a brand new format. Instead of the usual 3-hour race, the Sandown event was split into three legs; two one-hour races with a 40-minute final leg, with the gaps to the leaders at the end of each leg added to the compulsory pit stop time for the following race. This change in format was in a response to feedback from competitors through two meetings and a survey from Australian GT management, and removed the need for in-race refuelling, reducing costs for entrants across the pit lane.

Qualifying saw only minutes of dry running before the changing weather brought heavy rain across the circuit. All four GT3 entries managed dry laps, however, the three strong GT4 class and the remaining five Invitational entries all had their laps affected by the conditions. The 59 Racing #59 McLaren 720s managed the fastest lap in dry running and started from pole alongside the #63 Eggleston Motorsport AMG Mercedes. The I class was headed by the #65 Daytona Sportscars Coupe, ahead of the Lamborghini Super Trofeo of Jim Manolios, while GT4 pole went to the #48 M Motorsport KTM of Justin McMillan and Glenn Wood.

Leg 1 started in drying conditions on Saturday afternoon, and it was Peter Hackett in the #63 that took the hole-shot into turn 1 ahead of Fraser Ross in the #59 McLaren. The pair immediately stretched away at the head of the field, while championship leader Geoff Emery in the #1 Audi had to fight his way back after a spin in the first corner. By the time Emery had recovered to take third place ahead of the lower class cars, Hackett and Ross were 40 seconds up the road, engaged in a tight battle for the lead. Ross prevailed with a move into turn 9, and stretched the lead to 3 seconds right away. His charge was halted by a brief shower, and then a safety car as the #50 KTM, driven by David Crampton, found the wall at Turn 4. The KTM managed to crawl back to the pits, and the weather subsided before the race went back to green.

The resumption of racing saw a flurry of pit stops. By virtue of running a single driver for the weekend, The #63’s 15 seconds shorter compulsory pit stop saw it emerge ahead of the #59 McLaren, despite Ross putting in a sequence of new lap-records to close the gap. Hackett managed the gap to hold the lead to the end of the first leg, with Ross setting a new lap record at a 1:07.9639, beating the old mark by 0.6s. The gaps at the end of leg one meant that the #59 car would have to take a 9-second longer pit-stop in leg 2, while the Ensabella/Talbot Lamborghini and Emery/Tander would resume one lap down on the leading pair. Emery had struggled in the changing conditions, finishing leg 1 in sixth, behind the I class entries of Dale Paterson in a Chevrolet Camaro GT3, and Brendon Woods in the Daytona Sports Coupe. The #74 59 Racing McLaren 570s lead home the GT4 class by a lap over the #48 KTM X-Bow.

Sunday morning’s leg 2 saw more of the same at the front of the field, with Hackett defending from Ross at the head of the field. Despite being a lap down, Liam Talbot in the #129 Trofeo Motosport Huracan bought in as well to make it a three car battle, until a spin dropped him into the clutches of Emery. The battle at the front continued all the way through to the pit stops, with both leaders pitting at the same time. Astonishingly, the #59 McLaren emerged ahead of the #63, despite a longer compulsory pit-stop time. Ryan Simpson, now at the seat of the #59, managed to stretch the lead out to 11 seconds by the end of the second leg, with the battle for third separated by 44 seconds between Trofeo Motorsport and Melbourne Performance Centre Audi, over a lap behind the leaders.

The end of leg two fell at exactly the wrong time for the GT4 leading #74 59 Racing Mclaren, who had become beached at turn 9 seconds before the neutralisation of the race. This erased their lap advantage over the #48 KTM, with the third runner in the class, the #50 KTM, many laps down due to accident repairs from leg 1. Dale Patterson maintained his lead in the I class at the seat of the Chevrolet Camaro GT3, with the #29 Trofeo Motorsport Lamborghini Super Trofeo, driven by Jim Manolios and Ben Stack, 5 laps behind. Leg 2 saw the demise of the #65 Daytona Coupe, who didn’t return to start leg 3 after mechanical dramas.

Most cars took their final compulsory pit stop one lap into the final leg of the event, with the #63 Eggleston Motorsport AMG emerging less than a second ahead of the #59 McLaren. On this occasion, the McLaren had no answer to the AMG, and Hackett stretched out a comfortable lead over the rest of the field. With only 20 minutes left, Simpson brought the McLaren 720s back to the pits; a punctured radiator spewing fluid onto the concrete, forcing the retirement of the car from second place. All attention turned to the battle for third place; Ensabella returning to finish the last stint in the Lamborghini, trying to hold off the charge of Garth Tander in the Audi. A second unplanned pit stop for the Lamborghini allowed Tander to easily take the position, but he could do nothing to chase down Hackett who held a lap advantage to the finish line.

“We weren’t expecting that” remarked Hackett after the race. “We knew it was going to be super close after that pit stop, but the AMG GT has been incredible all weekend.” The result was Hackett and Eggleston Motorsport’s first win of the season, capping off a solid Endurance campaign. Second placed Geoff Emery and Garth Tander clinched the endurance title with their recovery drive, and maintain a championship lead for the overall Australian GT championship. “Garth’s done an awesome job, dragged me out of a couple of holes” Emery commented after the race. “I made it really difficult for us in the first race… attrition is the GT way and you’ve gotta be there at the end!” Garth Tander was full of praise for his Endurance team mate. “I think Geoff undersells himself. He’s won 3 GT championships [2017 and 2018] now.” 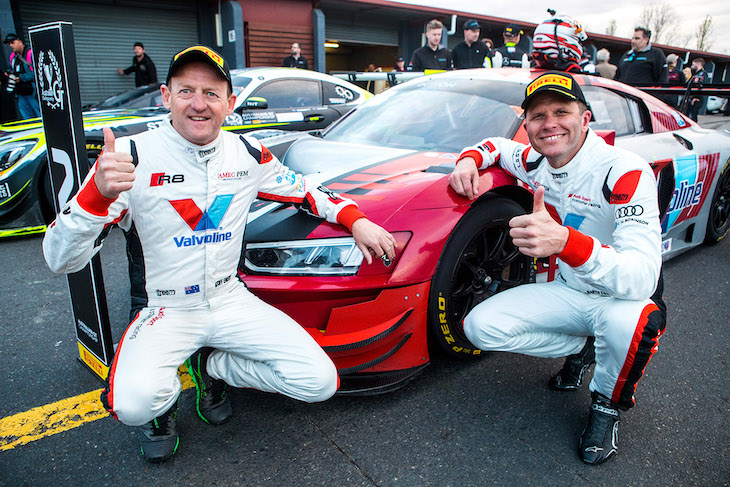 Third placed Trofeo Motorsport continued their good run of form after taking the win last round at The Bend. “Joe [Ensabella] did a great job out there, real team effort” Liam Talbot commented after the race. “Thanks to Liam, great mentor, taught me a lot this weekend” replied Ensabella.

The I class victory went to Jim Manolios and Ben Stack at the seat of their Lamborghini Super Trofeo. They inherited the lead late in the last leg after the Dale Patterson Camaro encountered problems, and elected to retire to minimise risk to the car ahead of the next round. The #25 Earth Electrical Porsche 991 GT3 Cup, driven by Nick Karnaros, was the only other finisher in the I class, finishing 4 laps down on the I winner, with the Daytona Sports Coupe and the Bulgarian built Sin R1 GT both encountering problems throughout the race.

GT4 was sealed by the #48 M Motorsport KTM of Glenn Wood and Justin McMillan, after the #74 59 Racing McLaren 570s didn’t emerge for the final leg. The #50 M Motorsport KTM managed to achieve a classified finish, 24 laps down from their team mate.