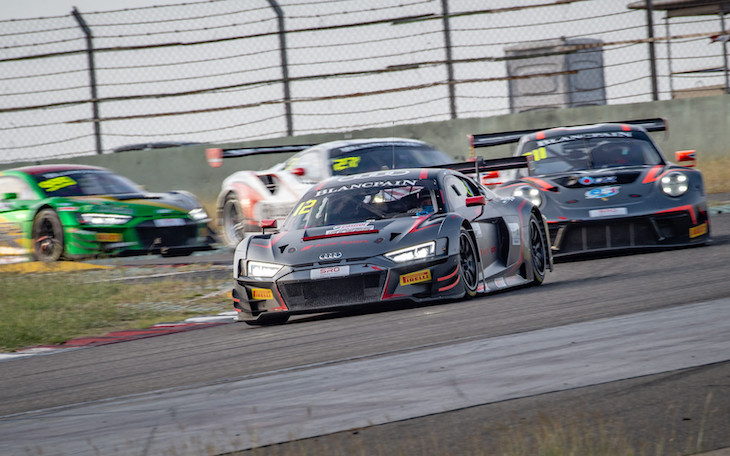 Instead, Choi headed into this year’s final 60-minute race nine points ahead of Absolute Racing’s Tanart Sathienthirakul and Philip Hamprecht who finished third behind fellow contender Yuya Sakamoto (HubAuto Corsa). The Japanese driver’s deficit stands at 13 points with a maximum 25 still to play for.

iRace.Win’s victory and fourth place was enough to secure the GT4 Teams’ title.

AMAC Motorsport’s Andrew Macpherson and Ben Porter officially clinched the Am Cup title, while first in class and sixth overall was enough for Vutthikorn Inthraphuvasak to wrap up GT3 Pro/Am honours. The Panther/AAS Motorsport Porsche also remains in overall contention, albeit 23 points behind Choi. Yuya Sakamoto, in third, remained glued to the Porsche’s tail while David Chen, Vutthikorn Inthraphuvasak and MG Choi completed the initial top-six at the expense of Phantom Pro Racing’s Chris On Chia.

The top positions remained unchanged after the pitstops, Tan using the sizeable advantage built by Rump to enjoy a comfortable run to the chequered flag. His cause was helped by Philip Hamprecht keeping Marcos Gomes at bay just long enough to leave HubAuto Corsa’s Brazilian too far behind the Audi once he’d cleared Absolute’s Porsche. 3.5s separated the top-two at the finish.

Inthraphuvasak frustrated Choi in the opening stint, but with the Panther/AAS Porsche subsequently dropping back due to its 15s Pitstop Success Penalty, Manuel Metzger was free to challenge Rahel Frey, who’d taken over from Chen, for fourth. Unlike Sakamoto and Hamprecht/Sathienthirakul ahead, clearing TSRT’s Audi ensured Choi scored the maximum number of points without incurring a Success Penalty for Saturday’s showdown.

With the top-four now strung out, the late-race interest centred on Frey, Keita Sawa and Alex Imperatori who re-joined seventh following Panther/AAS’s Success Penalty. First, the Porsche driver made absolutely certain of Inthraphuvasak’s Pro/Am title by taking sixth from class rival Sawa, whose ABSSA McLaren he shares with Piti Bhirombhakdi was enjoying its best run of the season. He then switched his attention to Frey who ultimately hung on to fifth by just 0.013s.

Further back, Phantom Pro Racing took Am class honours on home soil courtesy of Chris On Chia and Wei Lu, while Andrew Macpherson and Ben Porter celebrated their title with second place.

Ringo Chong and Setiawan Santoso scored their second wins of the season to help iRace.Win seal the Teams’ Championship with a round to spare. They took the chequered flag 22s ahead of Sunako Jukuchou who established a three-point advantage over former co-driver turned team-mate Takayuki Kinoshita in the race for this year’s Drivers’ crown.

There was drama before the end of lap one when pole-sitter Brian Lee made contact with ARN’s stranded GT3 car at Turn 4, which handed the advantage to Jean-Marc Merlin. The Craft-Bamboo Mercedes-AMG would remain out front until just before the pitstops when Jukuchou nipped past. However, Team Studie’s lengthy Success Penalties ensured neither BMW would feature in victory lane. Instead, it was practice pace-setter Chong who made good on Santoso’s strong first stint.

iRace.Win might have finished one-two without the drive-through penalty that restricted Joe Chi and Keo Chang to fourth. However, their collective points were still sufficient to wrap up the GT4 Teams’ title.

MG Choi is the 2019 Blancpain GT World Challenge Asia champion after a fifth place in Shanghai’s season finale proved more than enough to beat three other contenders to this year’s GT3 crown. Ahead, the Porsche shared by Yuan Bo and Leo Ye Hongli won from fifth on the grid to further cement Absolute Racing’s Teams’ title.

Alessio Picariello and Jeffrey Lee finished second overall and first in Pro/Am after the latter resisted championship contender Vutthikorn Inthraphuvasak, who had to win to retain any chance of overhauling Choi in the championship. The Panther/AAS Motorsport Porsche he shares with Alexander Imperatori finished just 3.8s shy of its target.
Further back, BMW Team Studie’s Sunako Jukuchou made sure of the GT4 crown by scoring his seventh class win of the season. Ringo Chong and Setiawan Santoso finished second, one place ahead of iRace.Win team-mates Joe Chi and Keo Chang.

An unusual grid order meant 2019’s final race actually felt like two contests in one. Upfront were four crews with the only victory to play for, and it was Chris van der Drift, who inherited pole after crash damage prevented ARN’s Porsche from starting, that looked the most likely candidate early on. Indeed, JRM’s 911 enjoyed a five-second advantage over Frederik Schandorff’s VSR Lamborghini, Alessio Picariello (Craft-Bamboo Mercedes-AMG) and Shane van Gisbergen (Triple Eight Mercedes-AMG).

Behind, the midfield comprised all four crews still able to win the ultimate prize. The hopes of those behind Choi, who entered the final race nine points clear of Tanart Sathienthirakul and Philip Hamprecht, rested to some degree on whether Indigo’s Mercedes-AMG could make early progress from 13th.

Sadly for them, Manuel Metzger wasn’t hanging around. Indeed, by lap two he was already up to ninth having passed, amongst others, Yuya Sakamoto’s co-driver Marcos Gomes. The German was also just two places behind Hamprecht, while Alex Imperatori had only moved up one spot to fifth, still some way short of Inthraphuvasak’s target, after passing Leo Ye Hongli.

However, it wasn’t until the pitstops that Sathienthirakul/Hamprecht and Sakamoto’s chances would be completely extinguished by separate issues. Wheelgun failure cost Absolute’s Porsche 40s before a gearbox issue put the car out for good, while HubAuto Corsa’s Ferrari remained stranded on its jacks after they failed to retract.

There were no such issues for Panther/AAS or Indigo who sent Inthraphuvasak and Choi on their way without delay. Pitstop Success Penalties plus the ensuing battle ahead meant both soon found themselves in the top-five, which allowed Choi to cruise home.

And it was unsurprisingly Bo who ultimately emerged victorious after the Chinese driver passed Chao at Turn 11. While those following also took advantage, the Absolute Porsche was soon powering its way to a three-second victory. 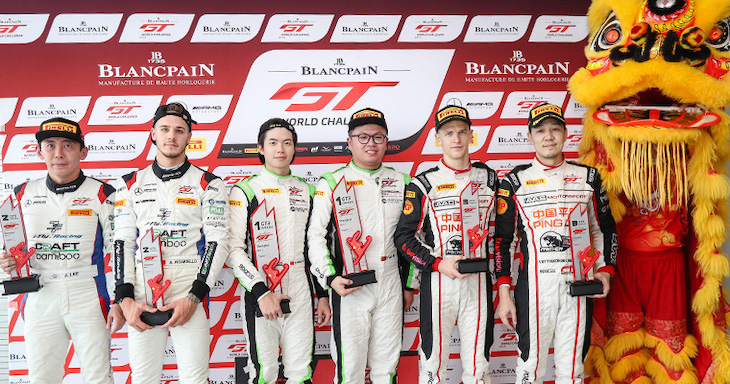 Behind, Choi was content to watch the three-way podium scrap play out between Lee, Au and Inthraphuvasak. The Craft-Bamboo Mercedes-AMG ultimately came home second, but not before VSR’s Au had tried and failed to pass at Turn 1, allowing Inthraphuvasak to pounce. Just 1.1s covered the Am trio at the chequered flag, while Inthraphuvasak added second in the overall standings to his Pro/Am title.

Choi cruised home ahead of Chao, who had dropped 17s behind Bo by the finish, while David Chen made up eight positions during his stint to bring Audi Sport Asia Team TSRT’s R8 home seventh.

Sunako Jukuchou wrapped up 2019’s GT4 championship in style by winning for the seventh time this season. 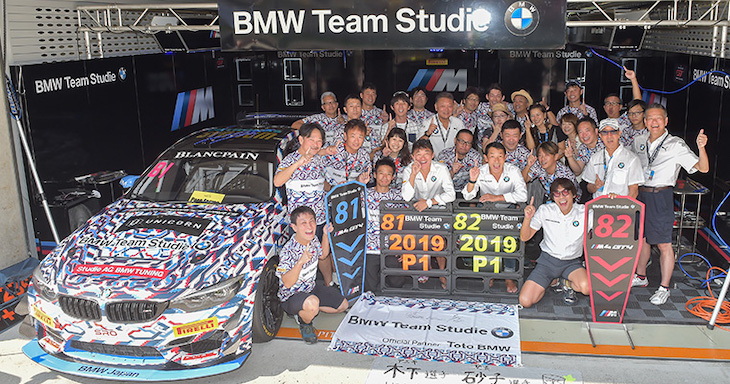 The Japanese driver, who started on pole, didn’t have things all his own way in the first stint thanks to Ringo Chong who overhauled the BMW Team Studie driver just before the pit window opened.

However, Jukuchou, driving solo this weekend in an effort to pip former co-driver Takayuki Kinoshita to the title, regrouped after the stops to beat Chong’s Team iRace.Win co-driver Setiawan Santoso by five seconds.

The second iRace.Win Mercedes-AMG completed the podium to cement the Teams’ title, while Kinoshita, who had to beat Jukuchou today, could only manage fourth.