Alex Harrison runs the @WECData Twitter feed bringing noteworthy snippets before, during and after every round of the FIA World Endurance Championship.

Prior to Round 2 of Season 8 though he has turned his hand to something a little different for DSC, with a look back at Toyota Gazoo Racing’s astonishing record at their home race at Fuji Speedway.

Before heading home in 2012, the first FIAWEC season had forced a wide range of emotions upon Toyota, disappointment from a delayed start, the fright of a flight in France, before a maiden podium in British summertime, and their first pole position, on a weekend that saw it converted into victory in Brazil.

After two races away, Kazuki Nakajima rejoined mates Alexander Wurz and Nicolas Lapierre in the #7 Toyota TS030 for the series’ first trip to Japan.

Their car would open the weekend in a commanding position, always in the top 2 of the three Free Practice sessions, and topping two. They would carry the good form into qualifying, and put it on pole position, with Nakajima becoming the first Japanese driver to start from the front of the grid. The first of four years where the brand would visit home and steal the fastest lap.

Despite the two Audi R18s never being far away, a commanding performance came from the #7, with the lone TS030 acquiring the race lead no less than seven times, to lead a total 181 laps or 78% of the race. Just 11.2 seconds splitting the winner from second became the then-closest overall finish, whilst Nakajima joined only France’s Benoît Tréluyer as outright winners to taste victory on home soil. 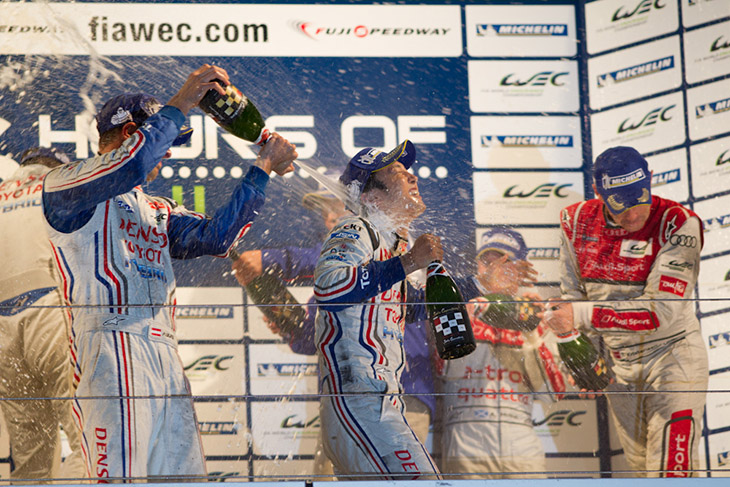 Much like the previous year, a two-race break, but this time for the car saw Wurz, Lapierre and Nakajima again meetup at Fuji in 2013. Unable to replicate its P1 start of 2012, and this time joined by the sister TS030, the #7 would start from the head of the second row. But then the rain came.

With the #8 out of serious contention from the start, Toyota’s hopes were rested on the #7. Gambling due to the weather-inflicted safety car situations, Audi was forced to pit their #1 R18 e-tron Quattro just as the race ticked into its eventual mid-race point, promoting the #7 TS030 to the head of the pack. 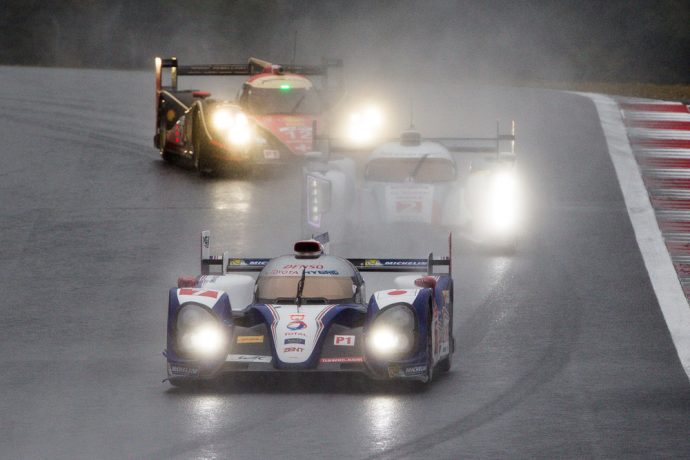 It remained there until no sign of a letup in the weather forced the chequered flag, resulting in Wurz, Lapierre and Nakajima becoming the first LMP1 crew in the series to defend a victory from the previous year. The 7 laps led by an overall winner would remain a record low, beaten only last year following Rebellion #3’s post-race promotion to victory at the 6 Hours of Silverstone.

The 2014 6 Hours of Fuji would see Toyota heading home after a season of further mixed fortune. Two early-season wins for their #8 of Anthony Davidson, Sébastien Buemi and Lapierre would be followed by tougher outings again in France, and this time America. Nevertheless, history showed they were the team to beat in Japan, and that once again proved. The TS040 scored a consecutive pole position before the eventual World Champions put in an even more dominant performance than their colleagues did back in 2012. The #8 led for 221 laps in all, or 94% of the race, to achieve the brand’s second FIAWEC 1-2 finish, a streak they would continue into the following round no less! 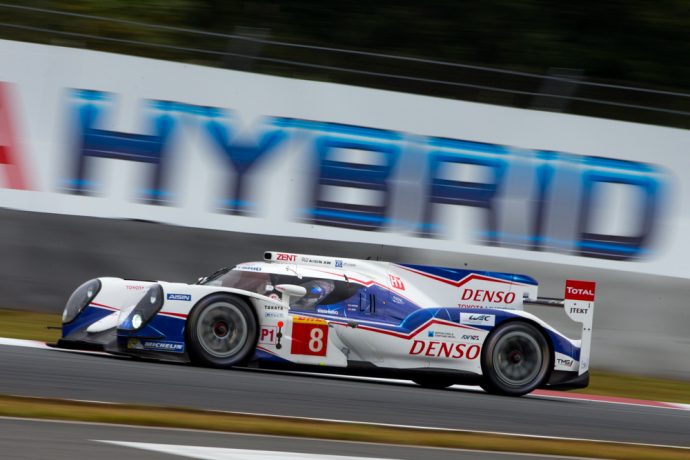 2019’s Jota Sport man Davidson claimed his second fastest lap in the series, continuing their rapid form in even years, with the Briton and Buemi leaving the Speedway holding a 26 point advantage in the championship fight, likely starting to imagine one hand upon it.

2015 saw a somewhat down beaten Toyota heading home in search of the win that had eluded them throughout the year, with reigning champions Davidson and Buemi, this time joined by Nakajima, having scored only a single podium finish six months prior at the opening 6 Hours of Silverstone.

A third-row lockout would be all the team could muster in qualifying, with the TS040’s unable to match their R18 or 919 Hybrid-shaped rivals in either lap times or top speed down the Speedway’s 1.475km front straight, Nakajima posting their best time of the outing 2.1 seconds down on Porsche’s weekend best a telling fact. The race too failed to go their way, with Porsche’s #17 trio of Mark Webber, Timo Bernhard and current-Toyota man Brendon Hartley achieving a stunning third-straight win, to-date the only overall victory in Japan by a German-flagged factory, whilst Davidson and Buemi extended their finishing streak to 15 races, aided by Nakajima. 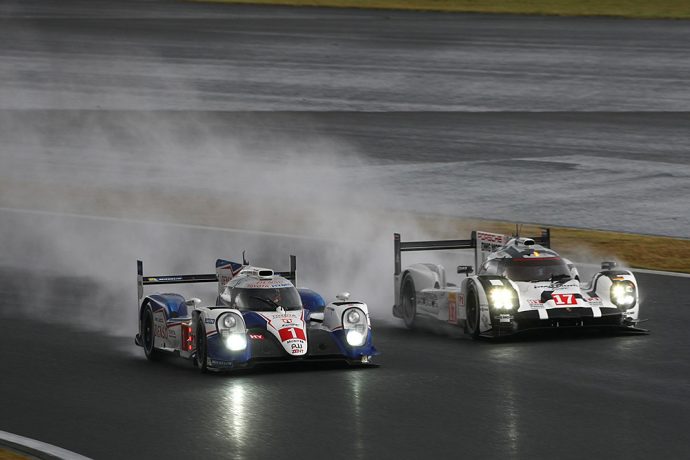 A distinctly stronger Toyota returned for 2016, in the form of their brand new V6-powered TS050, scoring a podium to begin the season in England and a furious 24 Hours of Le Mans of which the ending no endurance racing fan can forget. At home, it was this time the #6 trio of Stéphane Sarrazin, Mike
Conway and Japan’s Kamui Kobayashi who headed in as Toyota favourites.

The car qualified at the back of row 2, despite Kobayashi setting the fastest lap of the weekend, aside from the sister #5 TS050, however by the first hour’s conclusion the car had already spent time leading the field. It would return to that position five times further, interrupted only briefly by the #1 Porsche 919 Hybrid. 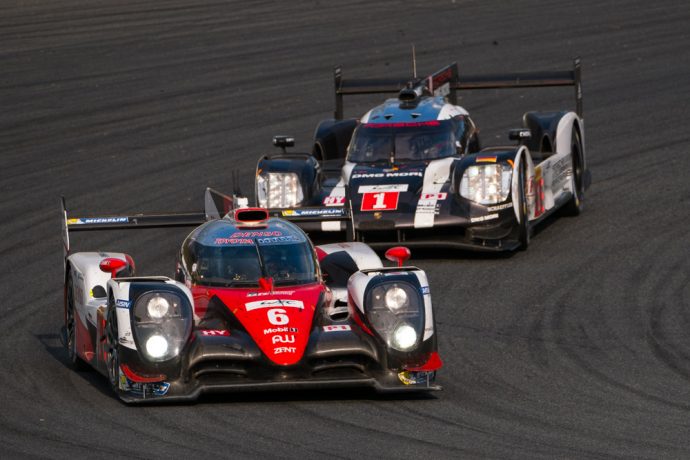 The final hour provided a feast for the eyes, as Kobayashi and Audi #8’s Loïc Duval went to battle amongst the traffic, culminating with a tense finish in which the #6 crossed the line just 1.439 seconds clear of its German counterpart. The most laps (6627) in a 6-hour race ended in the closest outright finish in FIA WEC history, at that point, to date the only series win for a car wearing the number 6.

For Toyota, 2017 likely felt like a replica of 2014. The #8 of Davidson, Buemi and Nakajima would start the season in solid form, winning both the 6 Hours of Silverstone, after the sister #7 had claimed the brand’s first pole since Fuji that year, and then the marque’s first win at Spa. A run of form would then hit the German-flagged opponent, this time Porsche and specifically their #2 919
Hybrid, with its four-win streak, before heading once again to the Speedway where Toyota had other ideas. 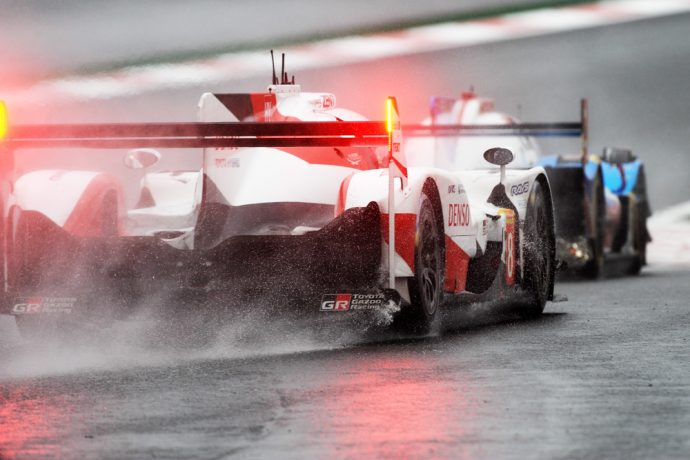 The second row again would start a TS050 charge forward, in another rain-hit Japanese race, as all four hybrid LMP1 cars led the race for a period, none more so than the eventual winning #8’s 49, 43% of the event. For Toyota, home once more provided the sweetest success and a second 1-2 finish of the year, after Spa.

With Porsche’s #1 919 Hybrid of Nick Tandy, Andre Lotterer and Neel Jani rounding out the rostrum, it marked a fifth-ever occurrence of a Toyota-Toyota-Porsche podium. Despite both GTE classes throwing out a certain podium order five times each, it remains the record-high for a single combination in the series.

Last year’s journey to the mountain had again seen glory for the Japanese outfit, with back-to-back victories for 2017 LMP1 runners-up Buemi and Nakajima, joined this time by double-F1 World Champion Fernando Alonso.

These were both 1-2 finishes no less, with the #7 following its sister home, to seal Toyota’s third win in Belgium and their famously long-sought maiden 24 Hours of Le Mans victory. It wasn’t without difficulty, however, as an uncharacteristic DSQ for both cars at the previous 6 Hours of Silverstone outing blotted their run, and intriguingly Rebellion’s #3 crew of Gustavo Menezes, Mathias Beche and Thomas Laurent had closed to within 2 points of the leading TS050 in the standings.

Pole position for the #8 would extend the gap, combined with a DNF for the #3 and ultimately victory for the sister #7 brought it right back into contention, as Mike Conway and Kamui Kobayashi again came up best in Japan, this time joined on the top step by José María López, who became the first Argentinian to win an FIA WEC race outright. 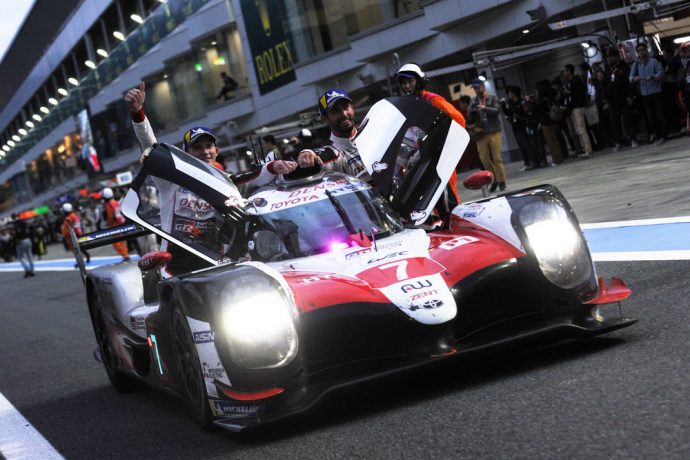 Their contribution to the 6602 laps covered bringing it just 25 shy of the total covered in 2016, whilst Spain’s Alonso had the honour of claiming his first series fastest lap and continuing
Toyota’s even-year streak in that category at home.

Having opened 2019 with a 1-2 finish at the 4 Hours of Silverstone, Toyota will again be aiming to repeat that feat at home. Both cars will have clear aims, the #7 to repeat its consecutive victory streak, which began in Japan last year, and the #8 to reel in its current 8-point deficit to the sister TS050, in what is the final Japanese LMP1 outing. Despite winning before, Brendon Hartley can become Toyota’s 10th driver to win at Fuji, a result that too would see teammate Kazuki Nakajima claim a circuit-record 4th win in the class at home.