The #17 DJR Team Penske duo of Scott McLaughlin and Alex Premat have taken the 2019 edition of the Bathurst 1000 by 0.6800 over Shane Van Gisbergen and Garth Tander’s #97 Red Bull Holden Racing Team car after a 6 hour and 27-minute epic. A last lap safety car restart saw a grandstand finish to the 161 lap event, with the podium completed by the #2 Walkinshaw Andretti United Commodore of James Courtney and Jack Perkins. 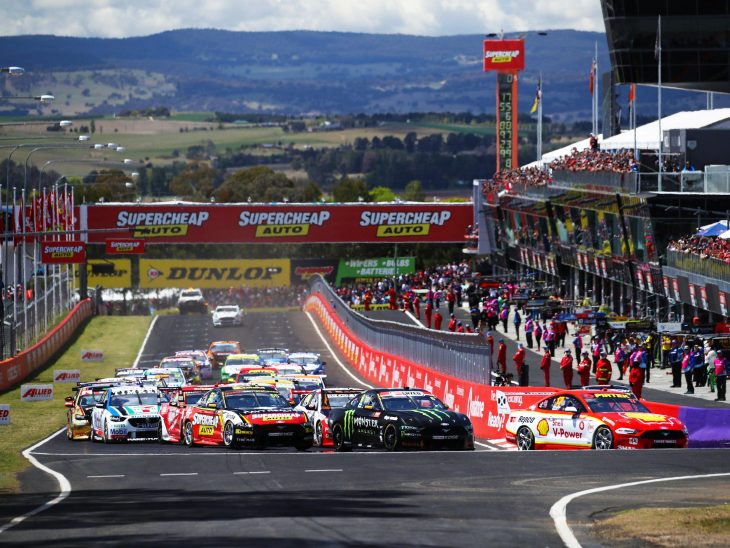 “I can’t believe I won the bloody Bathurst 1000!” McLaughlin said after the race.

“We had such a good car all week… I’m so proud of everyone. We made a bloody good car. I’ve dreamt about this.”

Premat added “That was so stressful, that was insane… I am so happy to win this race… It’s magic!”

The race got off to a rocky beginning, with the start procedure aborted due to a problem requiring medical attention for Brodie Kostecki in the #56 car. The culprit turned out to be a broken helmet fan, resulting in carbon dioxide blowing directly into the helmet. Fortunately, Brodie was able to recover to drive in the race, while his team were allowed to start from the pit lane with cousin Jake Kostecki taking start duties.

After a 15 minute delay, the race started proper but was neutralised almost immediately. A side-by-side moment out of the Cutting resulted in the #14 Tim Slade/Ash Walsh BJR car destroyed, and a lengthy safety car period to clear the incident.

It would be another 100 laps before the safety car intervened again, with a long period of green flag allowing developing strategies to play out. An early off at The Chase for Premat in the #17 saw the #888 Jamie Whincup/Craig Lowndes Red Bull Holden Racing Team Commodore take the lead, followed by the #55 Chaz Mostert/James Moffat and #6 Cameron Waters/Michael Caruso Tickford Racing Mustangs. An open driver’s side door for the #97 Shane Van Gisbergen/Garth Tander RBHRT Commodore lost them 10 seconds, but they were still in the hunt just outside the top four, while the #12 DJRTP Coulthard/D’Alberto car and #7 Heimgartner/Fullwood Kelly Racing Nissan completed the top 7, with the rest of the field over 40 seconds back.

A stellar recovery stint from McLaughlin brought the #17 back into the lead battle, and Premat was returned to the lead when Lowndes ran wide at Murray’s corner. A heavy off on lap 102 for Todd Hazelwood at the seat of the #35 Matt Stone Racing Commodore at the Metal Grate brought out the second safety car intervention of the race. The safety car fell perfectly for the #888 and #17 cars, who had just taken their stops, whereas #97 and #55 were unlucky to have just passed the pit entry, missing the chance to take the stop before being held up by the safety car. Both were forced to pit on the following lap and joined the safety car train at the tail of the top 10.

While the second safety car took 100 laps to appear, the next one occurred only 10 laps later on lap 113, as Jake Kostecki found the wall at Reid Park. The flurry of pit stops saw the Red Bull Holden Racing Team outdo the Dick Johnson Racing Team Penske crew, slotting the #888 ahead of the #17.

The longest stint of the race thus far was 24 laps and hadn’t been repeated since car #12 had managed that in the first stint. With 48 laps left to run, the teams began to work the sums to ensure they got to the end with only one more stop.

They were helped by a series of safety cars throughout the next half hour. At lap 124, a mistake from Chaz Mostert sent him hard into Tickford Racing team mate Cameron Waters at The Chase, beaching both cars and effectively ending Tickford’s chance at victory. While Chaz’s #55 car was able to continue, the damage to the #6 was too great, putting Waters and Caruso out of the race. 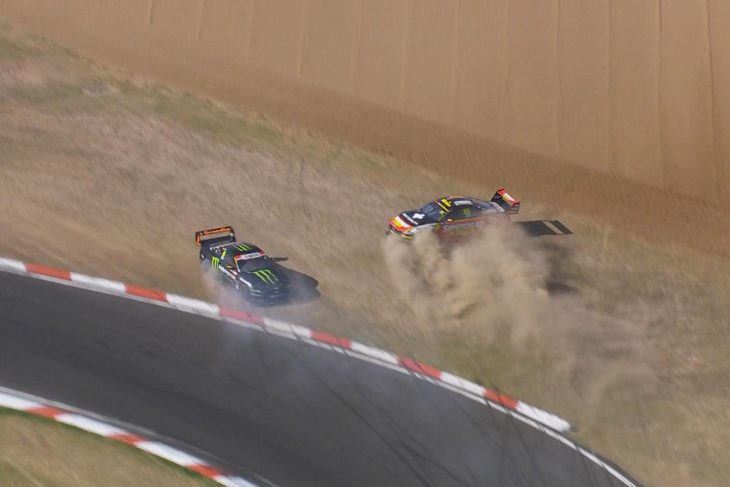 “I’m just absolutely gutted,” Waters said about the incident. “We should have been on the podium.”

The restart saw an immediate incident for the #99 De Pasquale/Brown Erebus Motorsport car; A stuck throttle firing the car hard into the wall at Reid Park. De Pasquale was extracted from the car rattled but unhurt.

The extended break gave those upfront a chance to save fuel, but a strategy change for Van Gisbergen in the #97 had him pit for fuel and green tyres, looking to capitalise late in the race. An audacious dive on Will Davison in the #23 at the Cutting saw him move up to 7th, and put him in a good position to challenge should the race remain green.
But there was more incident to come. On lap 135, 26 laps from the finish, Alex Rossi backed the #27 WAU car into the gravel at Murray’s corner, beaching the Wildcard entry he shared with James Hinchcliffe in the gravel.

To prevent time loss due to double stacking behind the #17 car in the pit lane, Fabian Coulthard at the seat of the #12 DJRTP car backed the rest of the field up, giving McLaughlin and Whincup a 30-second gap into the pit lane. Coulthard’s actions caught the attention of race control, who handed down a pit lane drive-through penalty for failing to maintain a safe speed under safety car conditions. Whincup remained out in front as McLaughlin stalled leaving the pit lane, while the entirety of the field on the lead lap elected to pit. With the finish of the race over a stint from the finish, the question mark over the field was ‘how much fuel could you save?’ 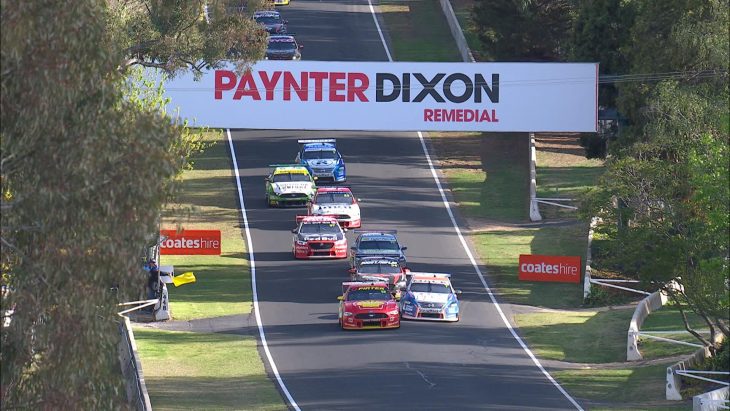 The Penske team were though cited for a rules breach over team orders with Coulthard’s actions the clear focus – it won’t affect the overall result but there could be trouble in store with a hearing before the next round of the Championship.

It didn’t take long after the restart for teams to realise they couldn’t save enough. Garry Rogers Motorsport were the first to blink, pitting Golding in the #34 from third at lap 141. As other teams tried to save fuel, Golding set his fastest lap to start eating into the gap to the leaders and was looking like the most likely to end up in the lead. Unfortunately, an unplanned further pit stop due to a vibration put them out of contention, bringing the #9 Erebus Motorsport car to be the next best-placed car fuelled to the end.

The leading #888 car had decided it wasn’t going to make it to the end, and Jamie Whincup turned up the wick to gap the trailing #17 by over 10 seconds, hoping for a safety car to help their fuel to the end. And they got what they were asking for, Garry Jacobson and Richie Stanaway making contact down the main straight on lap 151, firing both of them into the gravel at Hell Corner.

Whincup dived into the pits, topped up with fuel, and slotted back into the race in 4th position, losing out to McLaughlin, Van Gisbergen and James Courtney, but with the ability to run full rich to the finish.

The resumption of the race with 8 laps left saw McLaughlin and Van Gisbergen resume an epic duel which has typified the Supercars series over the last 18 months, while Whincup went to work trying to pass Courtney to bring the charge to the front. The top three still had significant question marks over fuel, but tyre quality late in the race prevented Whincup from making any inroads.

A final incident at The Elbow brought out a seventh safety car; Andre Heimgartner clipping the inside wall and firing into the tires on lap 158. Terrific work from the marshals cleared the incident site quickly enough to set up single lap dash to round off the 1000km race, in a straight shoot out between McLaughlin and Van Gisbergen.
But the series champion was untouchable on the final lap and gapped the Van Gisbergen to win his first Bathurst crown. The remainder of the top 4 remained static, with Courtney holding off Whincup to take the final step of the podium.

The recovering Reynolds/Youlden #9 Erebus Motorsport car completed the top 5, just ahead of the penalised #12 DJRTP car. The Charlie Schwerkolt #18 car of Winterbottom and Richards found their way to 7th, with the second Walkinshaw Andretti United #2 car of Pye and Luff 8th. The lead Nissan of Kelly and Wood was 9th, and the #5 Tickford Racing Holdsworth/Randle car rounded out the top 10.

With his 18th win of the season, McLaughlin extends his lead to 622 points over Van Gisbergen in the championship. With only three events remaining in the season, McLaughlin has the opportunity to wrap up the title in a fortnight’s time at the Gold Coast 600, which also doubles as the second leg of the Pirtek Enduro Cup.