Miguel Ramos and Fabrizio Crestani took a much-awaited maiden in the first race at Monza on Saturday. 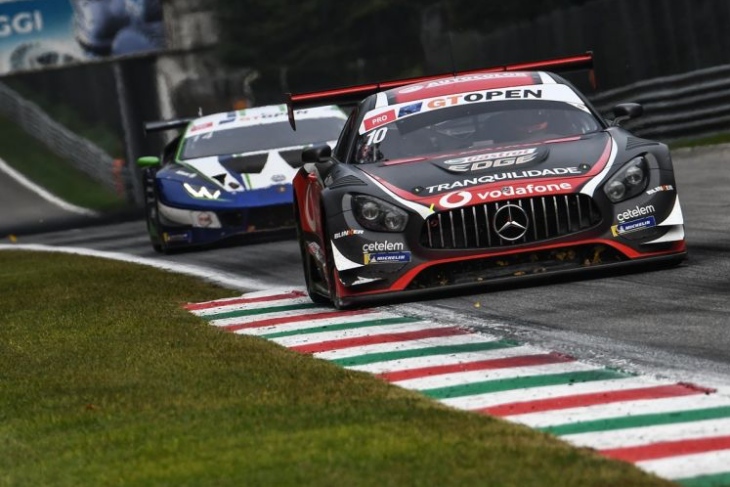 The duo’s SPS Automotive Performance Mercedes crossed the finish line second behind the Antonelli Motorsport Mercedes of Riccardo Agostini and Loris Spielli, but were named winners as the Antonelli duo had been penalised by 5 seconds for an infringement during their pit stop.

But the big headline from the opener didn’t concern the race winners, instead title hopefuls Albert Costa and Giacomo Altoè. They made a step towards conquering the 2019 title by finishing fourth today in Race 1 at Monza, ahead of the other Emil Frey Racing Lamborghini of Norbert Siedler and Mikaël Grenier.

The Swiss squad also secured the Teams’ title, in a day which saw the Teo Martín Motorsport McLarens hit by bad luck and drop out of the title race.

Fran Rueda and Andres Saravia in the #17 720S GT3’s challenge took a hit late. While locked in a four-way battle for third, Rueda ran over debris on the final lap, causing a puncture, dropping him to sixth. that added insult to injury after Altoè made a move at the first chicane to get past moments before.

In Pro-Am, Frederik Schandorff and Tuomas Tujula took their fourth class win with the VSR Lambo and the Dane taking the lead in the class standings by 3 points over SPS’s duo of Valentin Pierburg and Tom Onslow-Cole who finished sixth.

Newcomers Oswaldo Negri-Francesco Piovanetti, in their Spirit of Race Ferrari, won in Am on their debut, after class leader Giuseppe Cipriani suffered a puncture in the last lap in his Antonelli Mercedes.

The Italian has went into the finale with a 2-point advantage over the HTP Mercedes of Martin Konrad and Alex Hrachowina as a result.

Costa and Altoè seal it on Sunday

Albert Costa and Giaomo Altoè were then crowned 2019 Champions in the final race of the season on Sunday. There was no surprises as the Emil Frey Racing duo secured the crown with a fourth place finish. 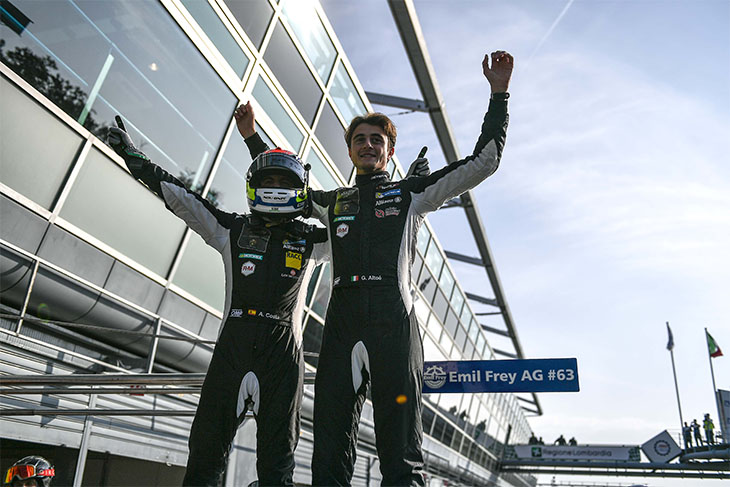 Up front it was a strong showing for McLaren, after a rough outing for Teo Martín Motorsport on Saturday. The team claimed a 1-2 finish with Henrique Chaves and Matin Kodrić taking their first win of the season in the #59. Finishing second were their teammates in the #17, Fran Rueda and Andrés Saravia.

By finishing third, Mikaël Grenier and Norbert Siedler, driving the #14 Emil Frey Lamborghini secured runner-up honours in the title race, making it a 1-2 in the standings for the Swiss team.

Valentin Pierburg-Tom Onslow-Cole were also crowned Pro-Am champions for the third year in a row in their #20 SPS Mercedes, while Giuseppe Cipriani took win and title in the Am class for Antonelli Motorsport.

It was a rather sedate race, during which the Teo Martin McLarens moved into a victory formation after the round of pit stops, emerging ahead of the #14 Emil Frey Lamborghini which started from pole.

Norbert Siedler did his best to take second off Andres Saravia, but couldn’t find a way past, and crossed the line third. It was plain sailing for Martin Kodric up front, who cruised to victory.

And that was that for the 2019 International GT Open season, another campaign featuring a strong field and a title race that went down to the wire.