UPDATE: Eurointernational has been named LMP3 champion after a post-race penalty which was dealt to the #13 Inter Europol Ligier for a drive time infringement.

In what was a memorable encounter, Chatin sealed the title with a stunning performance in the closing stages of the race. He reeled in and got past Phil Hanson in the second place finishing #22 United Autosports ORECA, before holding on after the final round of stops to take the race win and the championship.

“It was so good, the team did a great job, they gave me the car in a position I could work with,” Chatin said after the race. “It’s always hard to win in the ELMS but I was really confident in the car. I was pushing to the limit and I’m so happy to win this race and the championship.

“This title is a beautiful one. G-Drive had everything in place to win and we did it. Year IDEC was always in front, it’s a family.”

It was an uncharacteristic performance from G-Drive Racing’s Aurus, which had the advantage in the points going into the race but could only muster a sixth-place finish. The disappointing result was mainly down to an error in judgment from Job van Uitert. The young Dutchman, who has been a star all season, made an ill-advised dive up the inside of Memo Rojas for second place with 75 minutes remaining, which ended in contact, spinning the ORECA round.

The subsequent drive-through penalty handed to the team dropped it down the order to seventh, in part because a late safety car bunched the field before the penalty was served. It forced Jean-Eric Vergne to drive in desperation during the final hour, but the Frenchman was unable to climb the order and crossed the line sixth. By finishing second though, G-Drive Racing still receives a Le Mans invite. 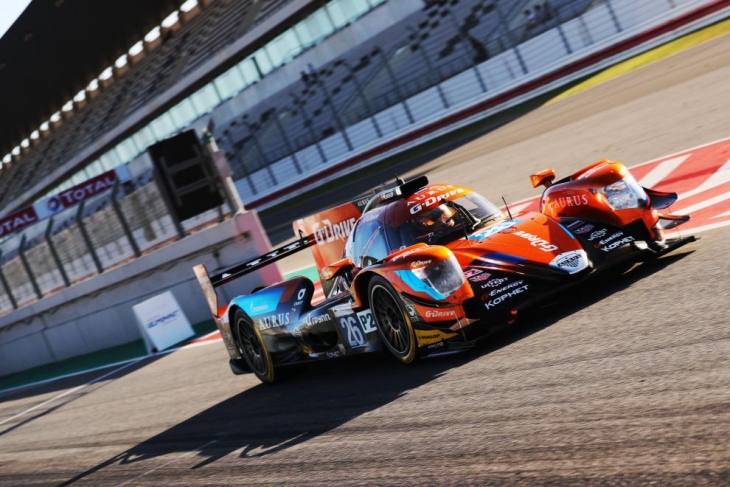 This denies two milestones, a first title for Aurus as a constructor, and a final title for Dunlop as a tyre brand, which is expected to leave the ELMS next season to be replaced by Goodyear. It did, however, create others. This is IDEC’s first ELMS title, Rojas’ and Chatin’s second and a first for Paul Lafargue. It is also Michelin’s first title in LMP2 since 2008.

Behind the #22 United ORECA, which controlled much of the race before Hanson’s second stint towards the end, the #39 GRAFF ORECA completed the podium. There was a skirmish in the final hour between Tristan Gommendy and Alex Brundle in the #32 sister United 07 Gibson, with Brundle initially getting past to make it a double podium for United. But after the final stops for fuel Brundle emerged behind Gommendy and was unable to retake the place.

Algarve Pro’s #25 ORECA completed the top five, former G-Drive Racing driver Andrea Pizzitola able to fend off Jean-Eric Vergne on this occasion. Not that Vergne finishing fifth would have been enough as G-Drive had to finish third to win the championship if IDEC won.

This all came after a red flag which lasted almost the entire first hour. The stoppage came on the opening lap after a huge incident involving six cars on the hill at the exit of Turn 5. Helicopter camera footage showed that Jack Manchester, in his first start back from injury driving the Carlin Dallara, was tagged and spun in the middle of the pack and was hit by Christian England in the #3 United Autosports Ligier.

That collision sparked further mayhem, as Damiano Fiorvanati in the Oregon Team Norma ploughed into the Ligier, as Christian Reid in the #77 Dempsey Proton Porsche was blindsided and hit the Dallara. That then sent him pin-balling off, Wei Lu then hitting Reid’s Porsche in the JMW Ferrari. The #83 Kessel Racing Ferrari and #88 Proton Porsches also sustained significant damage in the chaos.

This forced the Oregon, Carlin, United, Kessel and both Proton cars into retirement. Only the JMW Ferrari was left being repaired in the garage once the race got underway again 55 minutes later, before rejoining the race at the start of Hour 2.

Two major headlines came from the LMP3 class here in Portugal, in what was the final race for the current generation of cars. 360 Racing won its first-ever race and Inter Europol’s #13 duo of Martin Hippe and Nigel Moore won the class title with a second place finish. 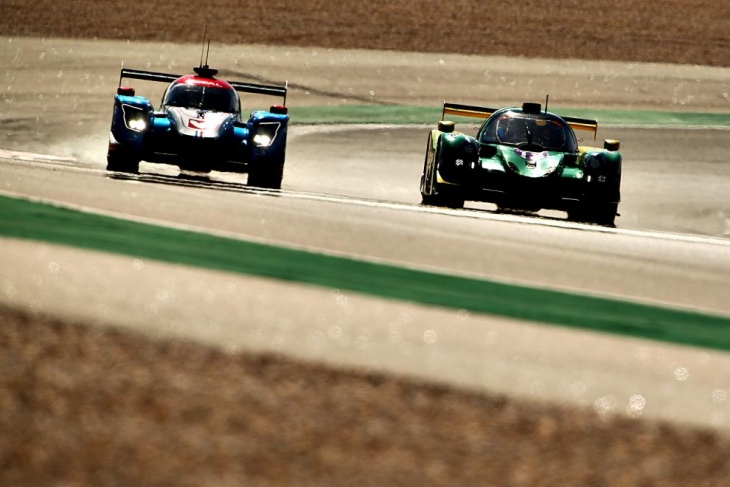 First Inter Eurpol’s achievement must be recognised. The Polish team is now reigning LMP3 champion in Asian Le Mans and European Le Mans. It’s been a brilliant season for the outfit, which took the title race down to the wire and beat Eurointernational to the honours.

Eurointernational, which was tied with Inter Europol on points heading into the race, had a poor outing and finished seventh. The team didn’t feature and was at a disadvantage, in part because much of Mikkel Jensen’s drive time was burned during the red flag and subsequent safety car period, meaning Jens Petersen was left to fight for places for much of the middle portion of the race.

Then there was 360 Racing’s performance. It was an unlikely win, during which Terrance Woodward, James Dayson and Ross Kaiser came back to win after being handed an early drive-through. Strategy calls and gaining the better part of a lap during the safety car caused by a huge off for Richard Bradley in the Duqueine Engineering ORECA, who went head-on into the barriers at Turn 1.

This left Terrance Woodward with the task of defending the lead in the closing stint of the race, which he did admirably.

Nigel Moore reduced the deficit to Woodward from almost a minute to 18 seconds, getting past Tommy Erdos in the closing stages. Erdos did though, bring home the #2 United Ligier third.

Completing the top five was Ultimate’s Norma and the #8 Nielsen Racing Ligier.

In GTE, title winners Luzich Racing’s Ferrari of Alessandro Prier Guidi, Nicklas Nielsen and Fabien Lavergne took the victory and cemented its position as the best team in the class with four wins in six races. Taking the second Le Mans auto-invite in the class was Proton Competition, despite the fact that neither of the team’s car’s finished the race following the opening lap multi-car incident which caused a lengthy red flag. 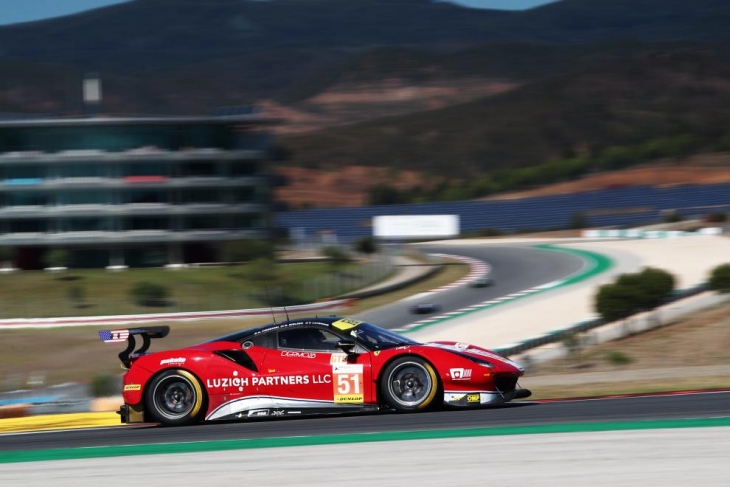 The Luzich Ferrari, in the end, finished 50 seconds ahead of the #60 Kessel Racing Ferrari 488 GTE Evo shared by Sergio Pianezzola, David Perel and Andrea Piccini. The #80 Ebimotors Porsche 911 RSR driven by Fabien Babini, Marco Frezza and Gianluca Giraudi finished third, some 73 seconds behind the winning car.

It was yet another drama-packed race in the class, which was depleted after the two Proton Competition Porsche 911 RSRs (the #77 and the #88), as well as the #83 Kessel Racing Ferrari 488 GTE, retired abruptly in the Lap 1 incident.

The #66 JMW Motorsport 488 was also a victim of this accident yet the crew managed to get the car repaired in the pits. A few laps after being back on track, it then went off at Turn 1 following contact with the #55 Spirit of Race Ferrari driven by Duncan Cameron. The #66 was parked temporarily behind the barriers yet it managed to leap back to its pits with a punctured front left tyre. Once the repair was secured, the #66 went on to finish fifth.

Meanwhile, the battle raged for the lead between the #60 Kessel Racing and Luzich Racing Ferraris. Both cars swapped positions during the second hour of the race while the #55 Spirit of Race example was a distant third.

These three cars pitted at the same time, half way through the race. This allowed the #80 Ebimotors Porsche 911 RSR, on a different pit strategy, to join the fight for the top positions in the class.

With 35 minutes remaining in the race, Andrea Piccini in the #60 overtook Marco Frezza in the #80 for second place. The #80 then had to defend hard to finish third after a late charge from Matt Griffin in the #55.

That wraps up the 2019 ELMS season, which was full of twists and turns all the way to the final race.