The Australian GT series returned to the city streets of Surfers Paradise on the Gold Coast for the penultimate round of the championship. The series returned to sprint format, with two 1-hour races the format for the weekend. The bumpy street circuit, high kerbs and warm weather all challenges to contend with around the 2.98km concrete canyon, which features two fast chicanes and a tight, technical final sector.

With the format returning to Sprint format, it also saw the return of the Trofeo Challenge and Trophy classes. Trofeo Challenge aims to unite a variety of GT-Cup cars alongside cars with similar performance brackets, featuring a variety of Porsche and Lamborghini cup cars, as well as the MARC cars, who run in the invitational class at the Bathurst 12 Hour. The Trophy class is for older spec GT3 machinery and featured a 7.2L Chevrolet Camaro GT3, as well as an older spec 911 GT3 and a Lamborghini Gallardo GT3 car. The addition of these two classes, alongside the GT3 and GT4 regulars, saw a 17 car grid contend the Surfers Paradise round.

Qualifying saw Fraser Ross at the seat of the 59 Racing #59 McLaren 720s take pole position for Saturday’s race 1, with Ryan Millier in the Trofeo Motorsport #129 Lamborghini Huracan rounding out the front row. Peter Hackett in the #63 Eggleston Motorsport Mercedes AMG qualified third, with Tony Quinn’s #7 Aston Martin Vantage completing the second row. A surprise poor qualifying session for the series leader and Endurance Series champion Geoff Emery saw his #1 Melbourne Performance Centre Audi R8 leave the grid 5th, ahead of the first of the Trofeo Challenge class runners, Broc Feeney, in the #93 MARC I Mazda. Dale Paterson in the #71 Chevrolet Camaro GT3 took Trophy pole from 7th, while the leading GT4 qualifier was Justin McMillan and Glen Wood at the seat of the #48 KTM X-Bow.

Race one started in gorgeous conditions on Saturday morning. Fraser Ross in the #59 59- Racing McLaren lead the field into the first chicane, while Tony Quinn in the #7 Local Legends Aston Martin and Peter Hackett in the #63 Eggleston Motorsport Mercedes AMG almost put each other in the wall, but managed to skate over the tall kerbs of the Gold Coast circuit. Ross immediately got to work stretching the gap at the head of the field, looking to overcome an 8 second longer compulsory pit stop minimum time over the chasing #129 Trofeo Motorsport Lamborghini Huracan driven by Ryan Millier.

Championship leader Geoff Emery in the #1 Melbourne Performance Centre Audi fell back from his starting position, being overtaken first by Broc Feeney in the #93 MARC I Mazda, then Geoff Taunton in the #95 MARC II Mustang. The MARC V8s cars were able to ride the bumps and kerbs more comfortably than the stiff GT3 Audi R8 and stretched an advantage over the championship leader before the pit stops.

The pit sequence saw a drastic change at the top of the order. Despite stretching out a 10-second advantage, the chaos around a brake fire for the #59 McLaren caused the team to exceed their minimum pit stop time by 8 seconds and saw both the #129 Lamborghini and #63 Mercedes AMG emerge at the head of the field. Ross was able to recover the lost ground, setting a new lap record in the process, and engaged in a thrilling battle with Hackett as the race headed towards the closing stages, with Millier around 2 seconds ahead. 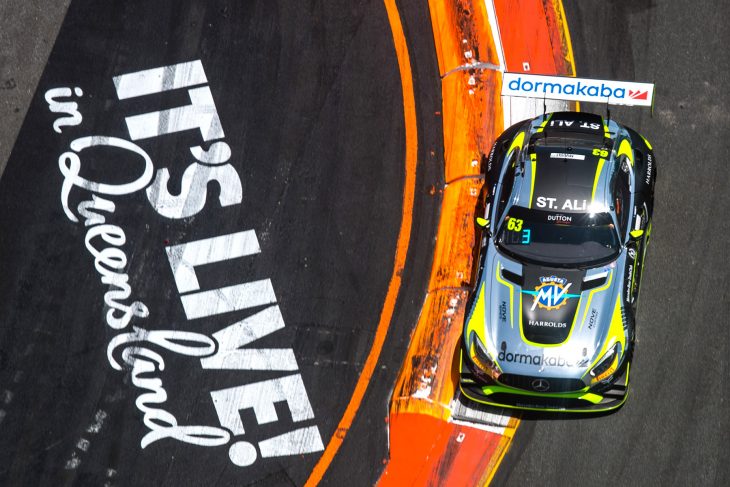 With 10 minutes on the clock, race leader Millier came across a string of Trofeo Challenge cars heading into the final sector. Unable to pass through the tight back end of the circuit, the small advantage he held over the battle for second was wiped, creating a three-car battle for the lead.

A risky move made my Millier saw the Lamborghini Huracan run three-wide alongside the Adam Hargraves #20 MARC II Mustang and Richard Gartner in the #69 Safe T Stop Lamborghini Gallardo exiting the final corner.

While Millier managed to pass both cars, Hargraves and Gartner came together, squeezing Gartner into the wall, damaging the right side suspension. The Trophy class Lamborghini managed to find it’s way back to the pits, and was the only retirement of the race.

With no more threat from behind, Millier went on to take the chequered flag by 3.4 seconds over Peter Hackett. Ross completed the podium; his late charge halted by apparent damage to the rear of the McLaren. Tony Quinn’s #7 Aston Martin was the last finisher on the lead lap, while championship leader Geoff Emery finished in 9th overall, one lap down. 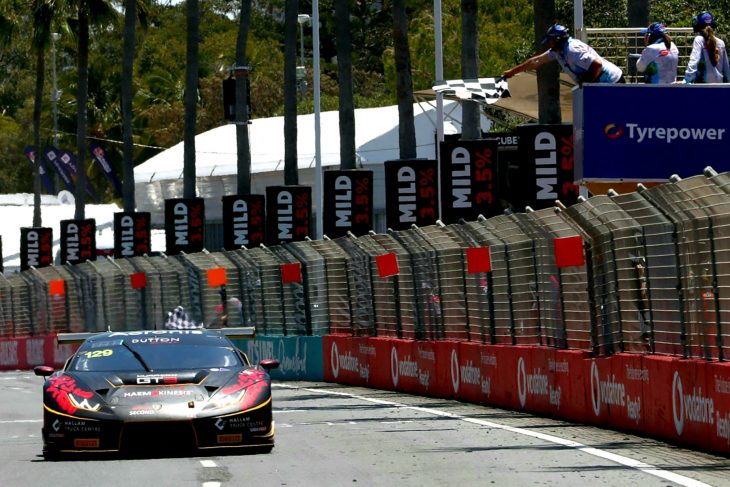 The Trofeo Challenge class went the way of Geoff Taunton in the #95 MARC II Mustang. Taunton took the lead thanks to his shorter pit stop, winning the class by almost 20 seconds. Hargraves in the second of the MARC II Mustangs and Feeney in the MARC I Mazda completed the podium.

The GT3 Trophy class was taken by Joseph Ensabella at the seat of the #64 Porsche 997 GT3, while GT4 was won by the #48 McMillan/Wood KTM X-Bow. 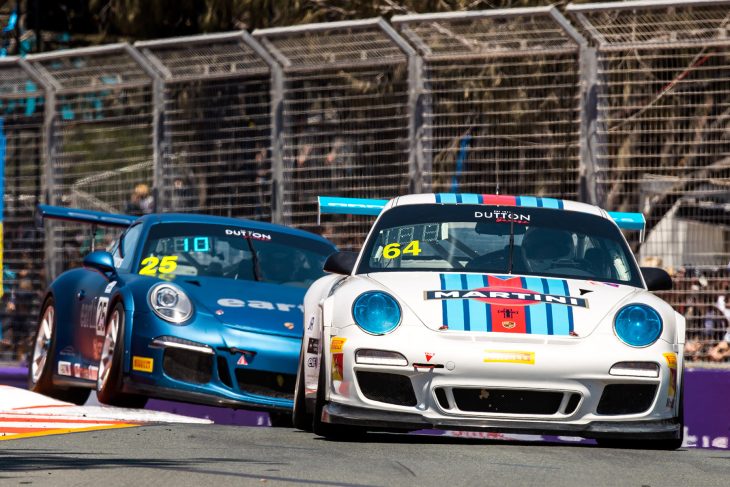 A warmer morning greeted the Australian GT field for a shortened race 2; 52 minutes the race length, due to clean up from an accident in an earlier session of the day. From the start it was Fraser Ross making moves from third position, firstly passing Hackett out of the beach chicane, before diving to the lead on Millier around the hairpin. Again, the concern for the 59 Racing driver was the compulsory pit stop time, with both Millier and Hackett having shorter stops to take. 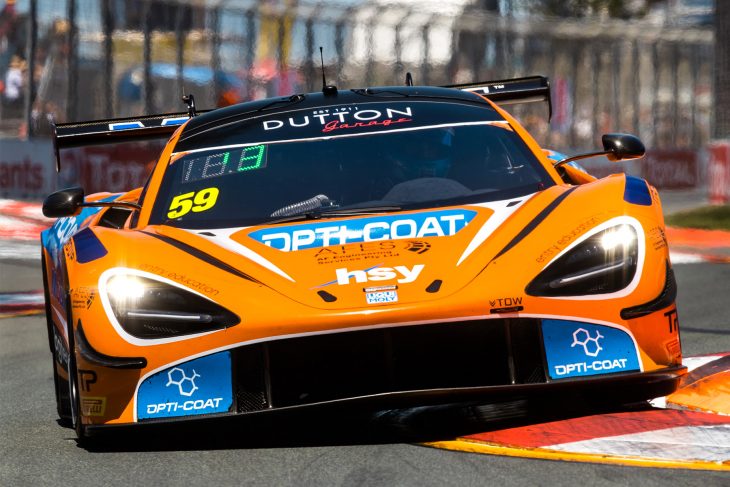 The race was neutralised early on due to a large chunk of the Turn 2 kerbing parting from the track. The concrete chunk was cleared from the track, and racing got underway just before the pit stop window opened. As a result of the safety car, the gaps between the classes were a lot closer compared to the Saturday race, causing the GT3 leaders Millier and Hackett to drop out behind the Trofeo class MARC cars, engaged in their own battle.

Ross elected to stay out until the end of the pit window, growing his lead enough to emerge ahead of both Millier and Hackett, who had lost time passing the Trofeo class cars as well as Geoff Emery’s #1 Audi. Shorter pit stops for Tony Quinn in the #7 Aston Martin and Adam Hargraves in the #30 MARC II Mustang saw them at the head of the field after the pit sequence. A hard-charging Ross made short work of both of them until the race was neutralised under Safety Car once again.

In a battle for position, Emery and Bayley Hall at the seat of the #28 MARC I Mazda made contact in the braking zone to the first chicane, pitching the MARC car into the fence on the right-hand side. Hall emerged from the car unhurt, but obviously unhappy with Emery, who he gesticulated towards as the Audi driver rounded the incident on the following lap. Emery’s car suffered a puncture but was able to finish the race, albeit in 12th position.

With only 10 minutes remaining, the race got underway again. Millier made short work of both Hargraves and Quinn, attempting to catch Ross in the McLaren at the head of the field, but Ross had already eased away and maintained a 5-second gap to take the victory. Hackett rounded out the podium in the #63 Eggleston Motorsport Mercedes AMG, with Quinn again taking home fourth place. 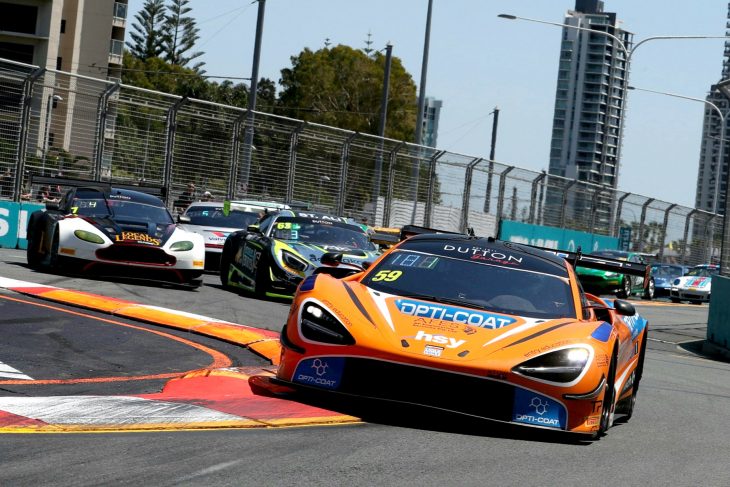 Hargraves held off Broc Feeney in the #93 MARC I Mazda and Geoff Taunton in the #95 MARC II Mustang to take the Trofeo class victory, with the gap separating the top 3 only 0.79 of a second at the flag. Dale Paterson in his #71 Chevrolet Camaro GT3 took the Trophy class victory, while the #50 KTM X-Bow of Trent Harrison took GT4 honours. 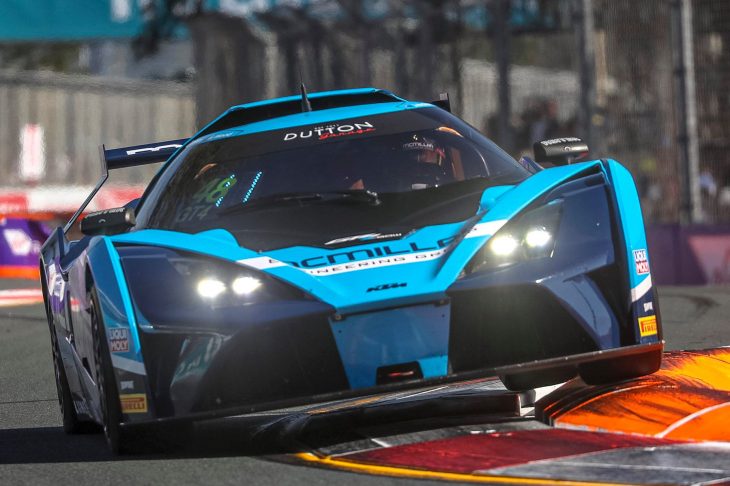 After a tough weekend, Emery finds his championship lead cut by 44 points to Peter Hackett, however, Emery still holds a 134 point lead heading into the final round of the championship at Sandown Raceway, supporting the Virgin Australia Supercars Championship on November 8/10.