Qualifying race 1 saw all manner of chaos and confusion, 18 of the 22 cars eventually finishing in a race punctuated by Safety Car and Red Flag and that saw the vast majority of the field off track at least once. 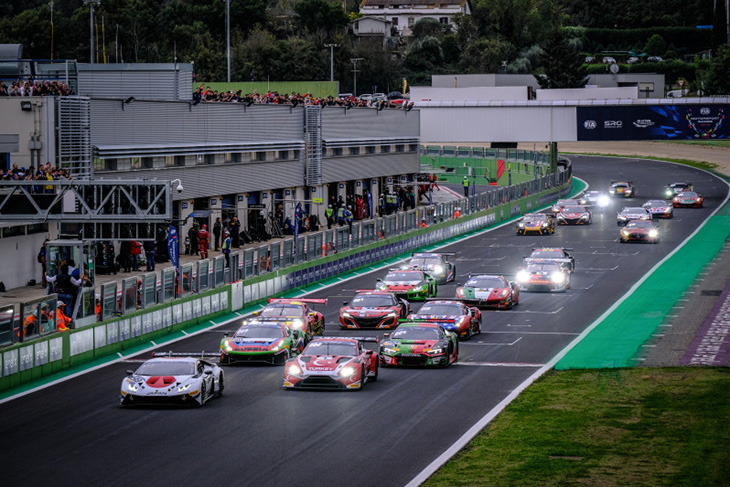 It would be won eventually by the #991 Team Germany Porsche, Alfred Renauer coming home at the head of a charging trio that made the best of fitting slicks during a mid-race Red Flag period.

A cold-ridden Christina Nielsen would come home a fighting second in the Danish Honda having held off Renauer for several laps, and fending off Team Belgium’s Nico Verdonck, in the #88 Audi, right to the flag.

Team Poland would come home fourth having been handed back a lost lap at the restart, Chris Froggatt would take fifth for Great Britain and team Belarus with father and son Alexander Talkanitsa would round out the top 6.

The Safety Car made two appearances, the first for a heavy off on Lap one from the Team Kuwait/ Optimum Aston Martin of Khaled Al Mudhaf, the #007 car heavily into the wall and out of the race (the team reporting after contact), the driver mercifully fine.

There had already been minor dramas for Team Great Britain’s Flick Haigh, forced wide, and for the Team Switzerland car which pitted for a punctured Pirelli.

Upfront polesitter Hamaguchi was storming away in the Team Japan Lamborghini from pole, but behind the #88 Team Russia Ferrari was making up ground, Rinat Salikhov taking positions from Miguel Ramos and then second from Team Turkey’s Salih Yoluc . 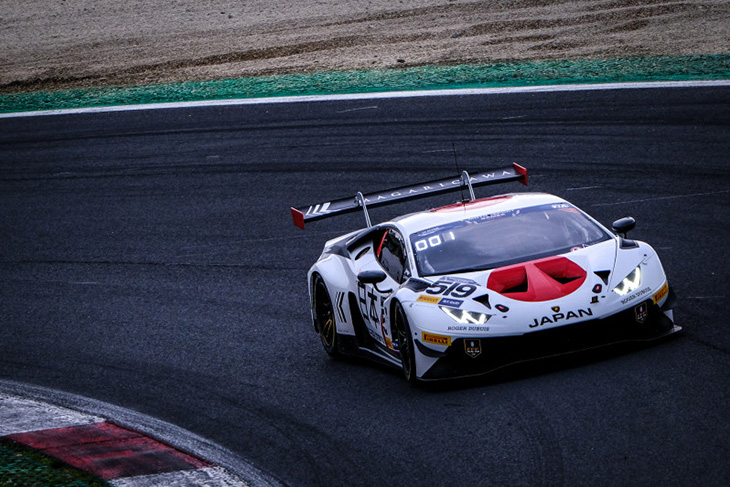 There was rain in the air though by now and conditions were getting tricky, Paul Ip a minor off and rejoin in the Team Hong Kong Honda, Steffen Görig the same in the team Germany Porsche.

There was more serious trouble though for Ramos, he was looking for a way by Yoluc but overdid it on the exit of T3, ran wide onto the infield, half spun on the sopping wet grass, the engine cover flying sky high as the Audi continued to go around, crossed the track and hit the wall on the outside, losing the rear wing and sustaining further damage, it would pit into retirement.

Jens Möller, by contrast, was having a steady run up the order to fourth in the Danish Honda as the rain came harder still. Team Poland first to pit for wets as out on track several were having difficulty keeping it on the island, Gianluca Roda wouldn’t have that excuse, a lunge up the inside of the Team USA Ferrari of Robert Ferriol saw the #18 car half spin, the Italian surviving that encounter but having an off of his own later on the same lap before being dealt a drive-through for the contact!

Salikhov though was still moving up, he passed the Team Japan car for the lead, Hamaguchi running straight on and losing more time, rejoining just ahead of third-placed Yoluc, the Turkish driver though would soon grab the place as the Lamborghini man was finding conditions increasingly tricky.

Others too were sliding off, Stephen Grove in the Aussie Porsche and Zhang in the Chinese AMG both temporary victims before Beaubelique’s run into the gravel (in the Team France AMG) and Alvaro Lobera being stranded on a kerb (in the Spanish Audi) saw Race Control call enough, a second Safety Car (and a delayed pit window morphing into Red Flag. 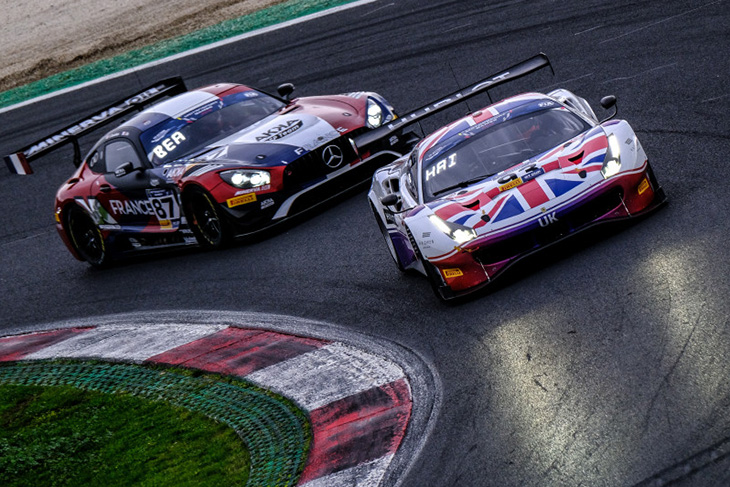 Even that process though saw some difficulties with the field following the Safety Car round to the start-finish straight under the red flag, all but the leading car stopping there for some time as the Safety Car carried on around with just the leading Russian Ferrari behind until almost a minute later when the remaining cars got the message and set off in slow-paced pursuit, the whole field eventually ending in the pit lane next time around.

Even then the uncertainty was not over, with the clock left to run the restart time was announced and then revised, teams making their tyre selection in somewhat unpredictable weather conditions and heading for the pitlane exit waiting for the restart with the time left to run now well under ten minutes.

Just before the pitlane reopened and the Safety Car was released though, with now less than seven minutes to run Race Control announced that 21 minutes (broadly the period of Safety Car running), would be added, a disaster for those teams that had opted to try to make the end of the race on wets (though others pointed out that the regulations made it clear that this was always an option at the Race Director’s discretion), with the track clearly by that point starting to dry out, 5 remaining laps on their rubber had just become an untenable 16, and from that point on they were doomed to tumble down the order, and that included the top two runners in the race from Russia and Turkey, they would finish 12th and 13th, and unhappy! 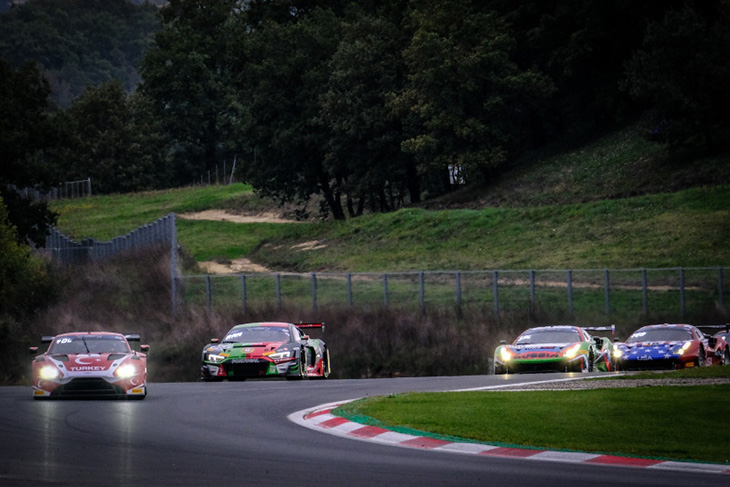 After a further two laps under the Safety Car, the field was released and almost immediately the quicker runners still on slicks started to make progress.

One fast runner in trouble though was the Team Japan car, a puncture after contact putting reigning Asian F3 Champion Ukyo Sasahara into the pits and tumbling back down the order, He’d mount a spirited fightback with his last flying lap the best of the race overall, 1:33.394, but the team will be unhappy with 11th for their efforts!

As the wets for the front runners crumbled a new lead trio emerged with Christina Nielsen to the fore, fending off Renauer and Verdonck, the Danish Honda flying and keeping the German Porsche back until the final few minutes when she finally had to give best. Verdonck though, despite a spirited effort could not pass, and was lucky to keep third after going off in a final attempt!