Damp, drying, then wet conditions made it a tyre gambling sort of race for the GT Cup medals at the FIA Motorsport Games at Vallelunga. 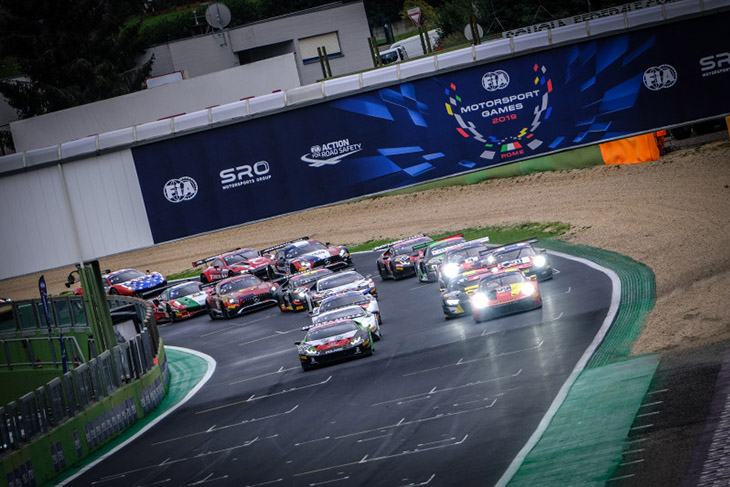 Only a brave few chose to start on slicks on a damp track that has been tricky all weekend.  The Swiss Lamborghini, started by Christoph Lenz was the best placed of them and at the very start of the race it seemed the gamble might have been worth it, three additional cars pitting for slicks having had an opportunity to sample the prevailing track conditions with Russia, Belarus and Kuwait pitting as the race went green.

Next time around Turkey and Spain followed suit, Great Britain the following lap.   Upfront meanwhile, it was another impressive display from Hiroshi Hamaguchi, up to second as Steffen Görig struggled with the conditions.   The Japanese took the lead from the Polish Lamborghini on Lap 4 and started to pull away immediately with the Team Thailand Porsche closing in to take second soon afterwards with Vutthikorn Inthraphuvasak.

The Swiss tyre gamble was busted within the first 10 minutes, Lenz penalised for a tag on another car and sustaining front end damage that would plague the effort thereafter, the team giving up the fight just after halfway.   There was contact too between Spain and Italy, Lobera running wide and hitting Roda’s Ferrari, spinning out the Spanish car which would be another one for an early bath.

Now though the slick-shod cars were making big progress, Roda, having survived the contact from the Lamborghini was the leading slick-shod runner and at the quarter distance, he was up to fifth, with Kuwait scything through to 7th.   A lap later Roda had made it up to 3rd, the lead looked well in reach, with the Kuwaiti now 5th.

Roda though threw it away, a stumble out of T9 on a still tricky track and he was off onto the infield, the Ferrari sustaining damage that was significant enough to see the car retired.

Salikhov now inherited the mantle of the top slick runner, the Russian passing Ashkanani for fifth.

Just as the tyre gamble had looked like the winning hand though, with the clock ticking down to the pit window, the rain came with a vengeance, and the slick-shod cars fell off a cliff, the window still 5 minutes away and the track treacherous.   The leader pitted with 33 minutes remaining, at that point an impressive 19 seconds up on the Thai Porsche, Inthraphuvasak opting to stay out for one more lap, but then dropping it into the gravel at T3 from the lead, the Thai effort over.

It took some time to call the Safety Car for recovery of the Porsche, it was finally scrambled with 24 minutes remaining, the race going back to Green with 18 minutes remaining, a fine battle between Australia, Belgium and Germany rather spoiled by a fumble from Nico Verdonck that saw the Belgian Audi punt the German Porsche into the gravel out of T6 and out of the race.

The Belgian would be dealt a post-race 30-second penalty in lieu of a drive-through, dropping the #88 car from 3rd at the flag to 9th.   That would see Brenton Grove up into 3rd, and with more torrential rain falling the Safety Car was scrambled for a final time, the race completed under the Safety Car.

Team Japan, impressive all weekend, would take the Gold Medal for Hamaguchi and Sasahara with Team Poland (Andrej Lewandowski and Artur Janosz) taking a fine Silver Medal and Team Australia taking the Bronze for father and son Stephen and Brenton Grove.

Russia though would top the medals table with Italy and Australia tied for second.