UPDATE: The #51 AF Corse Ferrari of James Calado and Alessandro Pier Guidi has lost the GTE Pro win, which would have been the marque’s first Pro class victory in China, to a ride height infringement.

The #92 Porsche takes the win with the sister #91 Porsche now second and the #97 Aston Martin third. Toyota’s seven-race winning streak, which dates back to the 6 Hours of Silverstone during the 2018/19 ‘Super Season’, has been snapped.

Rebellion Racing took its second FIA WEC victory today in the 4 Hours of Shanghai, its first of the season, after its #1 R-13 Gibson of Gustavo Menezes, Norman Nato and Bruno Senna fought through the field after a troubled start to the race, dropped the car from first to sixth overall.

Opinions on the ‘Success Handicap’ system aside, this was an entertaining, unpredictable race, which was close between the three LMP1 teams, which all spent time in the lead at various points. Rebellion Racing really had to push for this one.

The two Toyota TS050 HYBRDs, that were pegged back after wins at Silverstone and Fuji, didn’t have the pace to win this one. Despite their advantage through traffic with hybrid boost, in fuel consumption and tyre wear, they simply couldn’t better the R-13 which had far more straight-line speed and was consistently able to generate faster lap times.

Strategy helped here for Rebellion too, it must be said, the Swiss team recovering well from Nato’s struggles with tyre wear at the start. In the end, the #1 crossed the line a minute ahead of the #8 Toyota, which had a trouble-free race and a lap ahead of the #7 Toyota which lost time after serving a drive-through for jumping the start.

“It’s amazing, I’ve now taken a win in every class in the WEC,” exclaimed Senna. “Great job from the team we made no mistakes, we were clean and fast. Awesome job!” The two LNT Ginettas finished fourth and fifth, the #5 ahead of the #6. While various issues ultimately put the two G60-LT-P1s out of contention, they did lead in the first hour, the pace of the cars allowing Charlie Robertson and Ben Hanley to create a comfortable gap. Robertson, on lap 2, set the race’s fastest lap, a 1:48.428. The pace is there for the team, the next step is to string together a clean race.

Team LNT’s cars were also handed a drive through for jumping the start, lost valuable time in the pits throughout (including the #6 losing a minute after it missed its pit box) and struggled with tyre wear towards the end of each stint.

The racing in LMP1, on this occasion, was the closest and most action-packed it’s been for years, with plenty of battles for position on track. There is though, a difference in opinion between the drivers involved in whether the racing was good or not.

The difference in the way the cars produce lap times has never been more apparent, with the Rebellion and Team LNT Ginetta’s far quicker down the lengthy straights but much slower through the corners. Toyota felt the balance was too much in Rebellion’s favour, and even Gustavo Menezes admitted after the race that he felt they had “maybe a little bit too much advantage”.

Nevertheless, Toyota had to push hard to stay in contention for the win and eke out every advantage, something we haven’t seen for a long time. And the ‘Success Handicap’ has produced a different winner, which is what it set out to achieve.

It will be interesting to see how the balance in power shifts next time out in Bahrain.

In LMP2, Goodyear scored its first win, with the #38 JOTA Sport ORECA taking a comfortable victory over the #37 Jackie Chan DC Racing ORECA (also run by JOTA), which made it a 1-2 for the American tyre brand. This was also the first win for the JOTA name in sportscar racing since 2015, and it comes after a faultless performance from Antonio Felix da Costa, Roberto Gonzalez and Anthony Davidson.

“We’re so happy in the team, we weren’t expecting this, we expected a difficult race, thank goodness it went our way,” Gonzalez said after the race.

The win was set up by Anthony Davidson, who in the opening hour drove to the front from fifth on the grid.

“It was interesting to see the young guns in front of me, how they would drive, I slowly picked them off and managed the tyres, which was key. It was a great feeling to manage this race on my own without the input of engineers,” he said after the race.

The best of the Michelin runners were the United Autosports 07 Gibson, which would have challenged for the victory here, if debris getting stuck in the car’s air intake at the start hadn’t cost the team straight line speed in the opening laps, forcing them to pit for a check up.

Still, a podium finish for Phil Hanson, Filipe Albuquerque and Paul Di Resta is a strong result after a recovery drive.

There were two contenders here that will go away disappointed. The Cool Racing ORECA which started from pole position became the only retirement after just 30 laps, a full electrical telemetry failure to blame.

Racing Team Nederland also wasn’t able to leave with a strong result to follow up its Fuji win. The team had to start from the back of the grid after failing to set a time in Qualifying, then was handed a penalty for Geido van der Garde’s collision with the Red River Sport Ferrari at the final corner.

The car came home fifth, behind the fourth-place Alpine and just ahead of the High Class Racing ORECA which again was strong during Kenta Yamashita’s time in the car, but struggled for pace when Bronze-rated Mark Patterson was aboard.

High Class’ race was compromised by the FCY for the #95’s blowout, which came just a handful of seconds too early to benefit the team, which had to wait until the race went green again to pit and get Patterson out of the car to complete his drive time. It lost them valuable time, most of the whole field dived in and pitted under FCY, which ultimately cost them a top five finish.

Ferrari on top in Pro

In Pro, AF Corse scored Ferrari its first ever Pro victory at Shanghai. The #51 488 GTE of Alessandro Pier Guidi and James Calado were the victors, taking their first win of the season. The key to victory in the LMP2 class was tyre management, and it was no different in the two GTE classes. Here both drivers stressed after the race just how conservative they had to drive, particularly towards the end. The victory came as a surprise to the Ferrari team.

“This isn’t a track for Ferrari, but the speed was there, we had a great race,” said Calado. “We were fortunate because of the trouble for the Aston Martin but that’s racing, we’re in the title race now.”

The aforementioned trouble for Aston Martin Racing concerned its #95 Vantage AMR. It was the class of the field for most of the race and looked on course for the win here, but a puncture in the third hour for Nicki Thiim in the braking zone for the Turn 14 hairpin, forced the Dane into the pits, dropping himself and Marco Sorensen to last in the class. They would then go on to finish fifth.

Behind the #51 Ferrari, the #92 Porsche took second (finishing 6.7 seconds behind the winning car) ahead of the #91 sister 911 RSR 19 which finished up third, both cars unable to score Porsche the second win this year with a late charge in the final hour.

Porsche looked more likely than Ferrari, particularly early on, to take the win here, the 911 RSR 19s at times the quickest cars in the class. But a botched pit stop for the #92 and an unsafe release cost Porsche its leading car time which in the end would have won it the race, the team handed a 10-second time penalty to a later stop.

The best placed Aston Martin, the #97, which spent much of the race battling for a podium spot, finished fourth, just off the podium.

Two in a row for TF Sport

GTE AM saw TF Sport make it two wins in a row, Charlie Eastwood, Salih Yoluc and Jonny Adam enjoying a clean, quick run in a race which saw many of the contenders hit trouble at various points. The #57 Project 1 Porsche and #98 Aston Martin completed the podium. 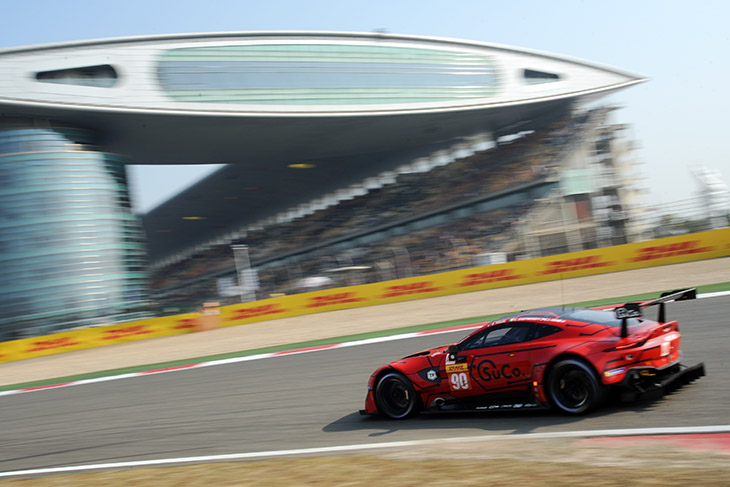 “We actually were fortunate with penalties and incidents for the other cars, we’re very happy for the win,” said Yoluc, who along with the team takes the lead in the class points standings. “I struggled with the pace all weekend, I’m glad it came back to me in the race.”

Adam was particularly complimentary of his performance, telling the media that this one “was down to Salih’s early stint” which set up himself and Eastwood nicely for a run to the flag.

But this was a race that was won not just on TF’s performance, but on the incidents that befell its rivals. The #56 Project 1 Porsche, which started from pole, had to serve a drive-through for a collision with the #98 Aston Martin on the opening lap. That cost the #98 Aston dearly, for the third race in a row Paul Dalla Lana, Ross Gunn and Darren Turner had the pace to win but had their race compromised by other cars.

The comeback drive though was superb, a podium finish well earned after a strong run from all three drivers, who were mistake free and quick after the early contact.

Behind them in the running order was the #83 AF Corse Ferrari, Manu Collard, Francois Perrodo and Nicklas Nielsen had a quiet outing, their 488 GTE lacking outright pace due to the amount of ballast the team had to carry for leading the championship.