2019’s Intercontinental GT Challenge season concludes this weekend at Kyalami, with a nine-hour race at the South African circuit, reviving an event with real heritage that was last staged in 1982.

What’s at stake? Aside from the eyes in the industry that will keep tabs on the condition of the revitalised circuit, the IGTC Manufacturers’ and Drivers’ championships are to be decided. Mercedes-AMG and Porsche will go head-to-head for Intercontinental’s Manufacturers’ crown while Maxi Buhk leads a cast of seven Drivers’ title contenders. 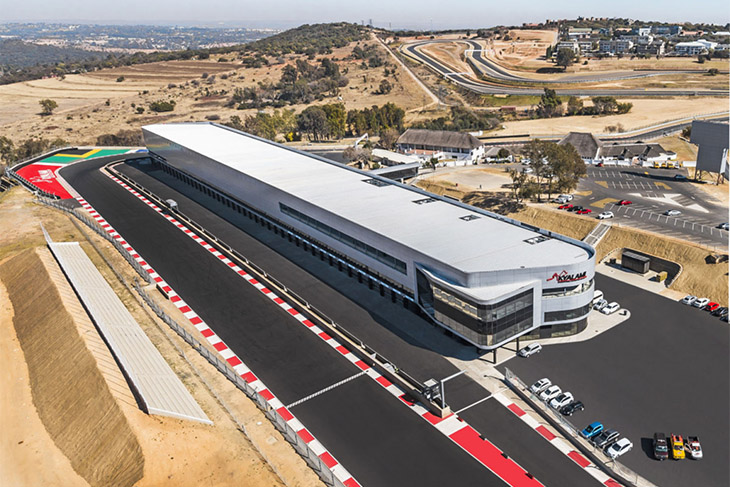 On the entry list are 28 cars, 19 of which are nominated to score Intercontinental points for one of eight manufacturers.

84 drivers head to Midrand just north of Johannesburg eager to pick up where motorsport legends Jacky Ickx and Jochen Mass left off 37 years ago when their Rothmans Porsche 956 prevailed at the original Kyalami circuit.

Interestingly, while the Kyalami 9 Hour hasn’t been run since 1982, SRO has hosted an event at the South African track in the past. Back in 2000, it ran the Lamborghini Supertrophy, a one-make series for the new Diablo GTR, which replaced the previous-generation SV. Just 30 GTRs were built and only 24 of them raced. 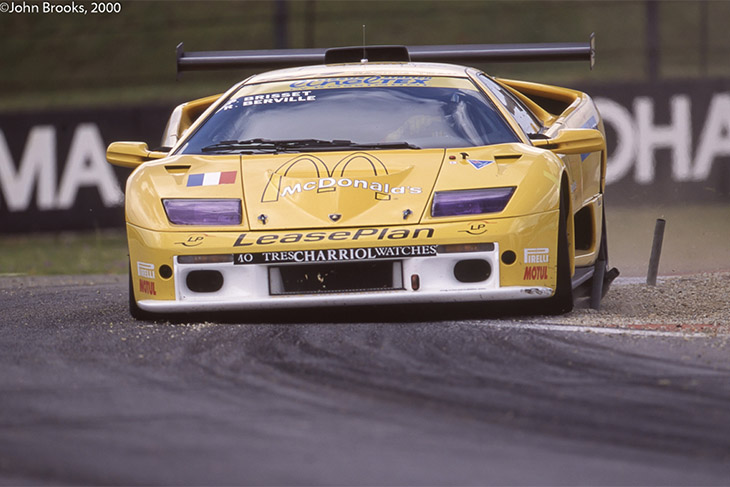 South Africa’s round featured on the undercard of the ISRS / SportsRacing World Cup, which had taken over the event previously known as the Kyalami 9 Hour. Indeed, its 150-minute race was considerably shorter than the nine-hour classic.

That was then, this is now, here’s a look at the entry for the race, brand by brand:

Mercedes-AMG heads to Kyalami leading both the Manufacturers’ and Drivers’ standings thanks to a supremely consistent season. Indeed, three podiums from four races have helped Maxi Buhk top the latter’s standings since Laguna Seca, while a double podium first time out at Bathurst has seen Mercedes-AMG dominate the Manufacturers’ Championship ever since. 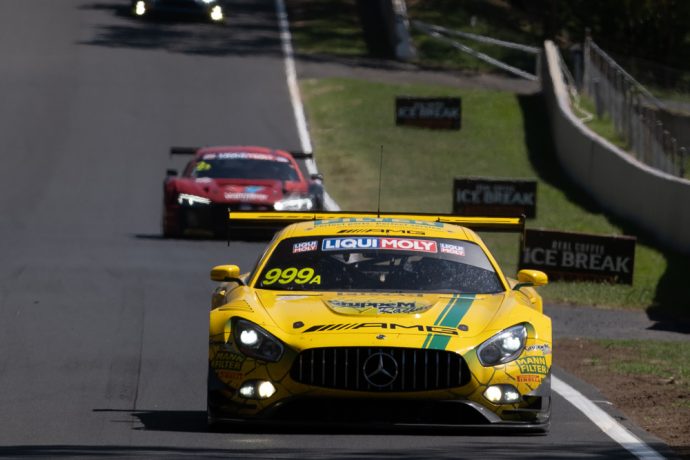 True, victory still alludes them in 2019, but a 22-point advantage over their only remaining rivals, Porsche, means further consistency will likely seal a first IGTC Manufacturers’ crown for Mercedes this weekend.

Buhk’s position is a little more precarious thanks to Frederic Vervisch who propelled himself to within six points by winning the Suzuka 10 Hours in August.

What’s more, Buhk’s former GruppeM Racing co-driver, Maxi Goetz, is tied second with Audi’s leading contender. And victory for either driver would guarantee them the title at Buhk’s expense, regardless of the German’s result.

Buhk again shares GruppeM’s entry with Maro Engel and Raffaele Marciello who are no longer contenders due to their co-drivers greater points total, while Goetz teams up with Yelmer Buurman and Luca Stolz at SPS Automotive Performance.

Strakka Racing and Black Falcon complete Mercedes-AMG’s full quota of Intercontinental-nominated entries. And at Strakka in particular, there are some notable drivers that make up its driving crew. In the #44 AMG, DTM star Gary Paffett is joined up with Lewis Williamson and Tristan Vautier. The team’s #43 car meanwhile, sees two-time IMSA GTD champion Christina Nielsen team up with Mercedes regular Dominik Baumann and Andrian Henry D’Silva in the Pro-Am class.

A 22-point deficit with 43 still available means Porsche is relying on rivals as much as themselves to beat Mercedes-AMG to 2019’s Manufacturers’ crown. Still, their own bases are fully loaded thanks to four factory line-ups, each of which is more than capable of claiming Stuttgart’s third Intercontinental win in five races. 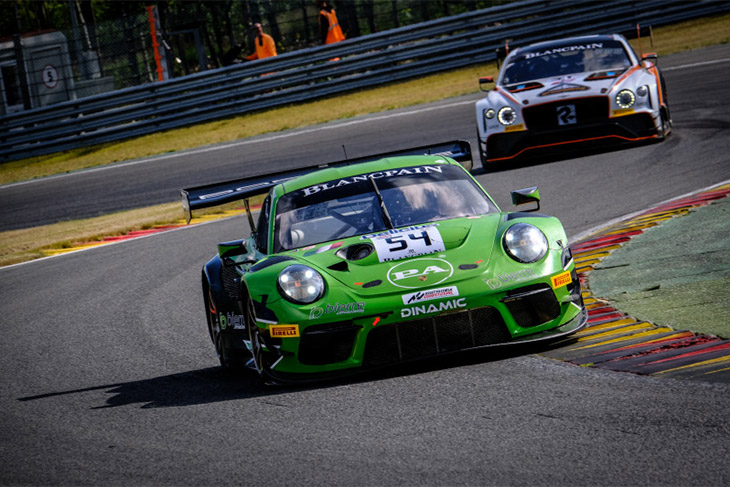 History is also on the side of Porsche, which has won the last two 9-hour races staged at Kyalami. It is also just one victory shy of Ferrari’s all-time record, which currently stands at eight.

In addition to the five current-gen 911s, there’s also a 996 GT3 R on the entry for Team Perfect Circle. The local entry returns to the 9 Hour 50 years on after competing in the 1969 edition with a Porsche 917. It’s quite a story, which DSC wrote back in August.

Victory at the Suzuka 10 Hours wasn’t enough to keep Audi Sport in contention for a fourth Manufacturers’ Championship in as many years. However, Ingolstadt does at least head to Kyalami with a chance to maintain its record of winning titles in every Intercontinental GT Challenge season to date. 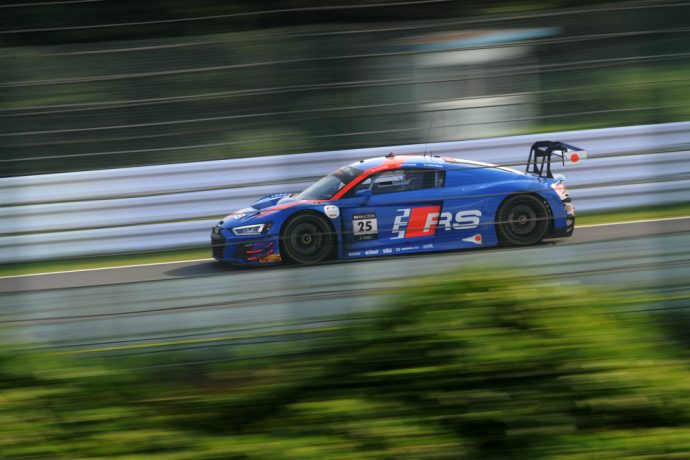 Frederic Vervisch, Dries Vanthoor and Kelvin van der Linde dominated the series’ Asian round and once again join forces at Team WRT. Results with different co-drivers earlier in the year mean only Vervisch can win the Drivers’ crown at Kyalami where Van der Linde contests an international GT race on home soil for the first time in his career. And while victory would see Vervisch clinch the title, it would also move his South African partner level on Intercontinental wins with current record holder, Christopher Haase.

BMW’s two full-season squads, Team Schnitzer and Walkenhorst Motorsport, demonstrated their true potential at Suzuka where Augusto Farfus qualified on pole before both cars ran one-two in the early stages. 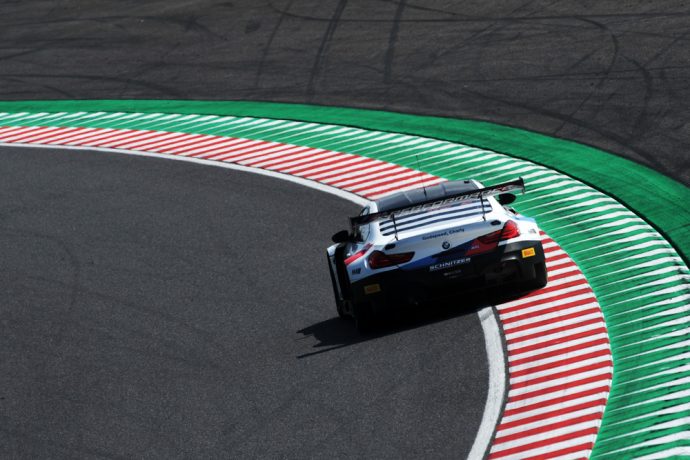 Separate issues ultimately prevented a headline result in the manufacturer’s first year as a full-season IGTC entrant. However, it now heads to Kyalami with several factors in its favour.

Schnitzer’s Farfus and Martin Tomczyk are joined by BMW’s DTM ace and home favourite, Sheldon van der Linde, while Walkenhorst’s second M6 features a driver with more experience of the contemporary Kyalami layout than anyone on this year’s Intercontinental entry: Gennaro Bonafede.

Things haven’t exactly gone to plan for Ferrari since its California 8 Hours victory in March when HubAuto Corsa scored 25 of the manufacturer’s 31 points. Indeed, two accidents for the Taiwanese team since then has prevented it from competing this weekend. 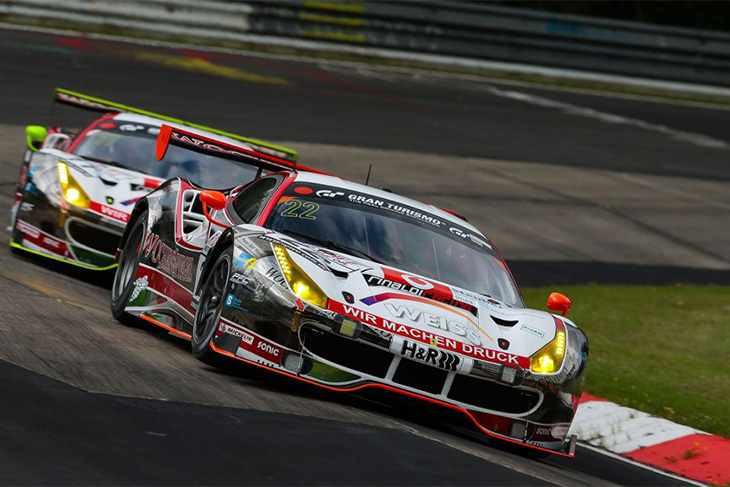 Instead, the Prancing Horse’s chances rest with Rinaldi Racing and WTM Racing, which has entered a single 488 GT3 for Leonard Weiss, Jochen Krumbach and local star David Perel. The latter was previously scheduled to race Rinaldi’s second Ferrari before the car was withdrawn.

A previous-generation 458 GT3 has also been entered by local team Pablo Clark Racing. However, the car is not nominated to score Intercontinental points.

M-Sport’s usual two-car attack heads to Kyalami desperate for a strong result at the end of a tough Intercontinental season that has promised much but never quite sparked into life. 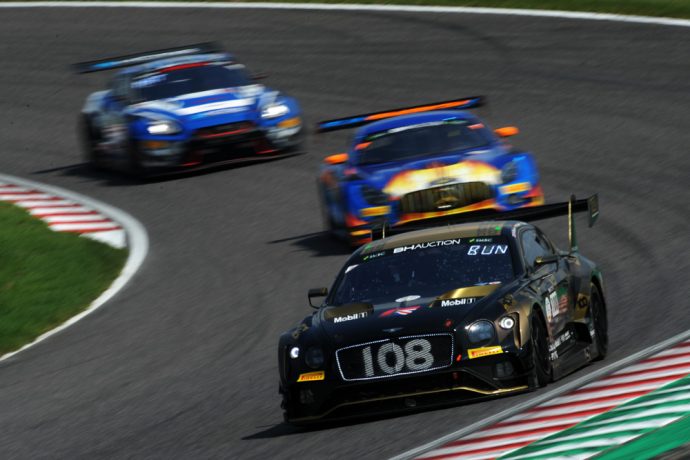 Its answer is to shake up both established driver crews. Jules Gounon and local hero Jordan Pepper, who tested the Continental GT3 at Kyalami earlier this month, are joined in their usual #107 entry by Maxime Soulet, who swaps places with Steven Kane. The Briton joins Andy Soucek and Rodrigo Baptista – returning for his second factory outing this year – in the other car.

Soucek set a succession of three fastest laps at Suzuka in August. And similar pace allied to a trouble-free run would make Bentley contenders at Kyalami.

A Nissan Skyline contested the last Kyalami 9 Hour in 1982. Now, 37 years later, two of its distant relatives are returning with KCMG. 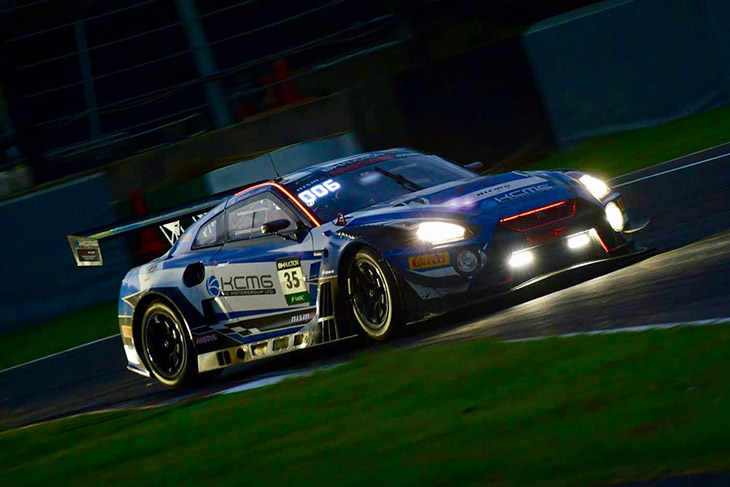 The modern GT-R NISMO GT3 remains one of the most popular cars on the grid amongst fans. However, the early promise shown at Bathurst and Laguna Seca has been less evident since mid-season.

KCMG heads to Kyalami with a new driver amongst its ranks: 2010 Formula Nippon champion and Super GT race winner Joao Paulo de Oliveira. The long-time Nissan driver left the factory roster at the start of 2019 but returns to partner Katsumasa Chiyo and Josh Burdon, while Oliver Jarvis, Alex Imperatori and Edoardo Liberati remain unchanged in the team’s #18 car.

The sole NSX GT3 entered by Honda Team Motul also features an Intercontinental debutant this weekend in the form of Dane Cameron, who has achieved plenty of success with the same car in America this year. His achievements with Honda/Acura also include this season’s IMSA WeatherTech SportsCar title, albeit at the wheel of DPi machinery. 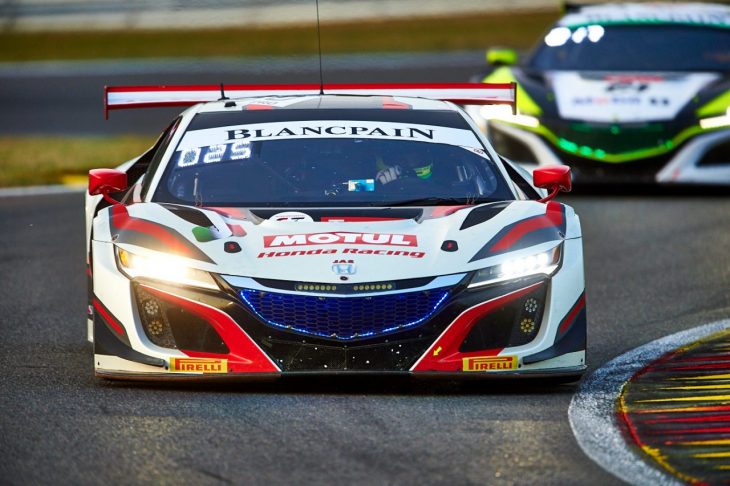 The NSX has shown flashes of pace this year, most notably en route to pole during its Intercontinental debut at Laguna Seca and when coming through from 33rd to finish sixth at Spa.

R-Motorsport and Garage 59 represent British brand Aston Martin this weekend, though none of the three Vantages are eligible for IGTC points as Aston Martin is not a registered IGTC manufacturer. Nevertheless having a few wild-card Vantage AMRs on the list adds extra spice to the event, with all three cars in with a chance here of winning their respective classes. 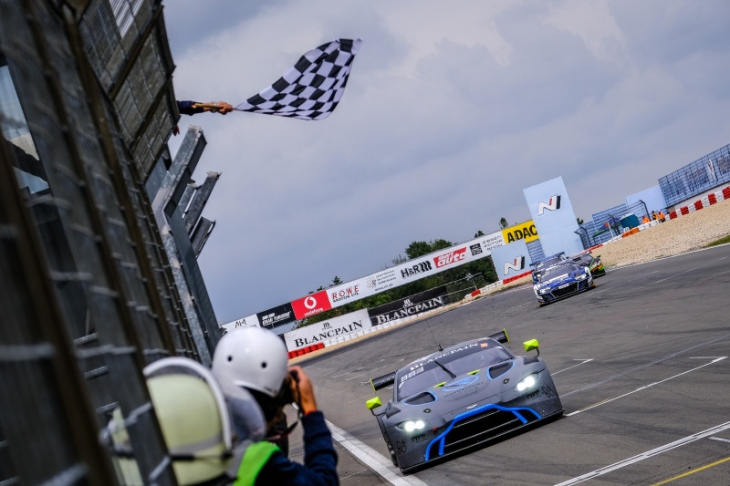 Both R-Motorsport examples are entered in the overall class and feature strong driver crews. The #62 is comprised of Marvin Kirchhofer, Hugo De Sadeleer and Ricky Collard, while AMR factory man Maxime Martin, Jake Dennis and team newcomer Enaam Ahmed will drive the #76.

Of the Swiss team’s squad, Ahmed is likely to be the most unfamiliar to DSC readers, the 19-year-old making his IGTC debut after successes competing in Formula 4 and Formula 3 in recent years, winning the British F3 Autumn Trophy and British F3 Championship in 2017.

This entry from the team marks its third IGTC appearance in 2019, after it competed in both the Bathurst 12 Hour and Spa 24 Hours.

Garage 59 on the other hand, will compete in the Pro-Am class with Alex West, Chris Goodwin and Côme Ledogar. This weekend they will look to build on their strong second place finish in the category at the Suzuka 10 Hours.

Just one Lamborghini will race this weekend in South Africa, in the two-car Group National class against the aforementioned Pablo Clark Racing Ferrari. 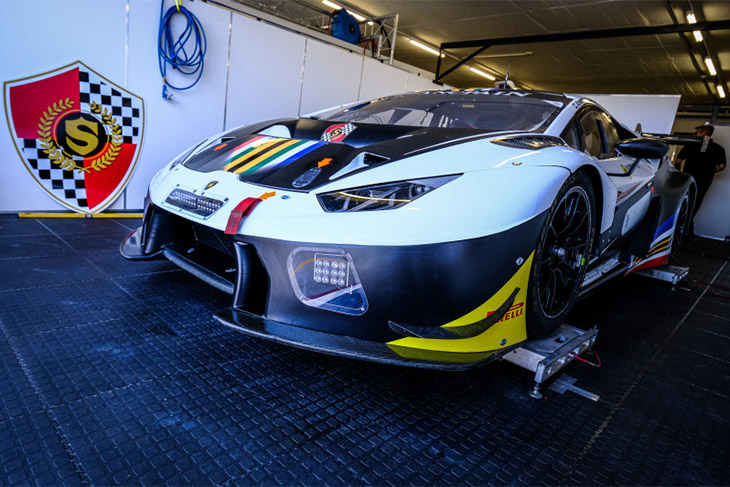 The Huracan GT3 on the entry will be run by Stradale Motorsport, with the South African trio of Charl Arangies, Craig Jarvis and Dawie Joubert.

The Stradale effort is likely to be the favourite here to take the class honours, the team fielding a 2019-spec GT3 car against Pablo Clark’s older 458 GT3.