When Narain Karthikeyan came to Super GT this winter, there was scepticism that the career Formula 1 journeyman, at age 42, could contribute to success for Modulo Nakajima Racing, a team that had often struggled just to finish outside the bottom of the GT500 Championship tables in recent years.

But while it won’t count for championship points, Karthikeyan put in a master class as he drove from the front row to victory in Race 2 of the Super GT x DTM Dream Race at Fuji Speedway, driving the #64 Modulo Epson Honda NSX-GT to the win, in the last-ever competitive run for a mid-engined NSX-GT.

The race began under cloudy skies, though the constant rainfall of Friday and Saturday was long gone, and until the race start at 2:30 PM, the sun was able to burst through the clouds for a time. Eager to atone for his humiliating early exit from Saturday’s race, Loïc Duval started from pole position in the #28 BMC Airfilters Audi RS5 DTM, alongside Karthikeyan. 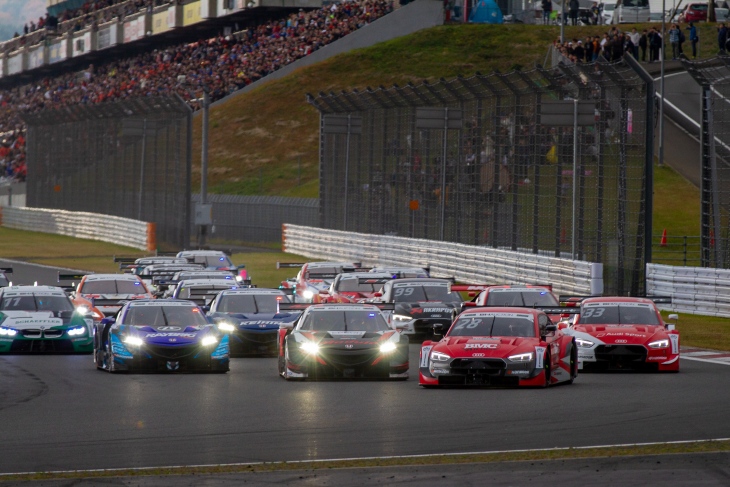 Duval, the 2010 GT500 Drivers’ Champion, and 2013 Le Mans 24 Hours winner led the first lap but Karthikeyan almost immediately slipstreamed past into the lead of the race. As did a train of mid-engined Honda NSX-GTs, Naoki Yamamoto in the #1 Raybrig NSX, Daisuke Nakajima in the #16 Motul Mugen NSX, and Koudai Tsukakoshi in the #17 Keihin NSX, all quickly dispatched of Duval within the opening laps as the Audi just lacked the straight-line speed compared to the Hondas.

Things only went from bad to worse for Duval when, on Lap 7, the Frenchman picked up a puncture going into Dunlop Corner and was forced to pit. Just a lap later, bodywork began to shed from Duval’s car right onto the racing line, and this triggered the first Safety Car intervention, just as Yamamoto had closed to within 0.7 seconds of Karthikeyan.

The race restarted just two laps later, with another chance for the double-file “Indy Restart”. Karthikeyan got away from the lead, while Yamamoto dropped to fourth behind Honda stablemates Tsukakoshi and Nakajima, before getting past Nakajima again at the end of the lap. 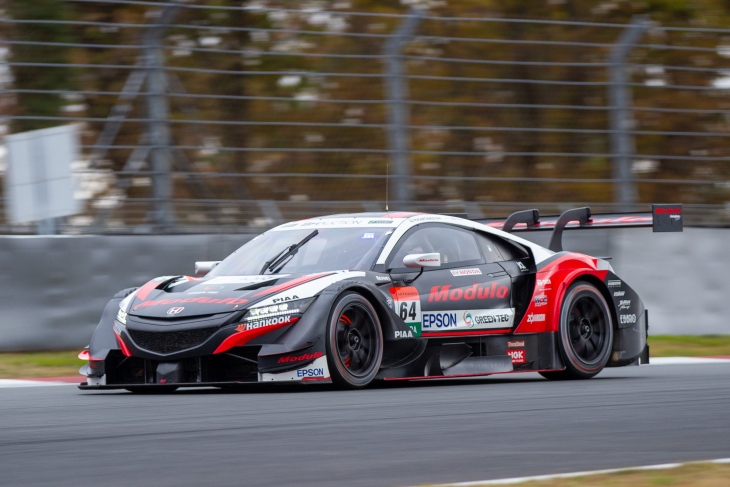 When double DTM Champions Marco Wittmann and René Rast paused their entertaining side-by-side battle for 5th to pit on Lap 14, that very briefly made it a Honda 1-2-3-4-5. Yamamoto pitted on Lap 15, and Karthikeyan and Tsukakoshi pitted on Lap 16. On Lap 17, Daisuke Nakajima pitted, alongside his older brother Kazuki, but couldn’t stay ahead of Karthikeyan when he exited the pits.

Another Audi fell to the wayside with a left-rear puncture on Lap 20 – this time, it was the reigning two-time DTM champion Rast! Audi’s Dieter Gass owed his and Duval’s punctures to a lack of setup knowledge for dry conditions. Rast’s blowout and the debris that his #33 Audi Sport RS5 DTM spewed triggered a second Safety Car intervention, during which, Duval pitted a second time, as did Yamamoto, the latter of whom gave up loads of track position to do so.

But their first stops were made before the start of the mandatory pit window. They’d have to come in a second time on Lap 26, just as all hell had broken loose after the second double-file restart.

The carnage began when Tréluyer led the field to green and Zanardi was cleared by Karthikeyan for 2nd on the road. Behind them, two separate incidents took place: First, Tsukakoshi collided with his Honda stablemate, Tomoki Nojiri (#8 ARTA NSX-GT), sending both cars spinning out at the 100R corner. 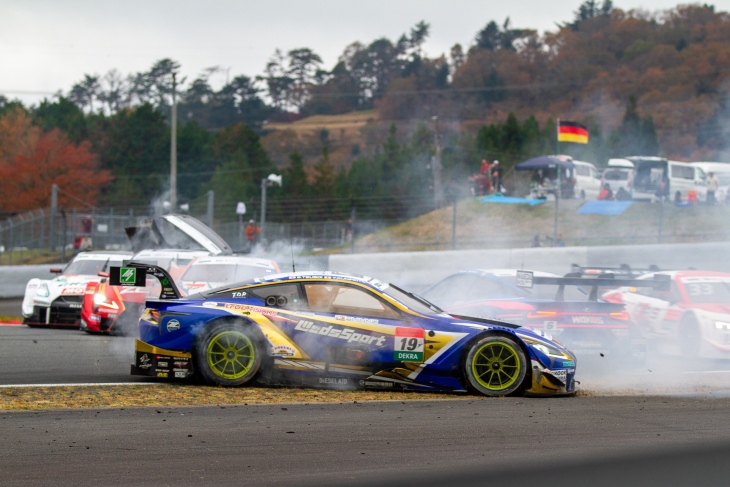 Then, just a kilometre or two up the road, five of the Lexus LC500s were wiped out in one incident that began when GT500 Champion Kazuya Oshima and Yuji Kunimoto collided at Turn 13, spinning them out, and then collecting Kazuki Nakajima, Heikki Kovalainen, Hiroaki Ishiura, and the Nissan of former Toyota ace Kohei Hirate, all within sight of GR Supra Corner (Turn 15). Definitely not what Toyota envisioned as a final send-off for the Lexus nameplate in GT500.

And when James Rossiter hit Zanardi as Zanardi was diving to the pits, leaving his #12 Calsonic Impul GT-R damaged and stopped at TGR Corner (Turn 1), race control was left no choice but to deploy a third Safety Car.

In total, six cars retired, another three suffered minor damage. Out of all this, Duval avoided the first incident and was now running third after dropping to the back of the field after a puncture, behind only Wittmann and race leader Karthikeyan!

When the race restarted once again, the time had completely elapsed, and the green and white flag waved together on Lap 31, a one-lap shootout to settle the winner. Karthikeyan nailed his third and final restart, a skill he picked up in his brief sojourn into NASCAR in 2010 and pulled away from Wittmann and Duval who scrapped it out for the silver medal and did they ever!

With Wittmann already being shown a black-and-white flag for pushing Rast off track in their earlier battle, the German still wasn’t shy as he went side-by-side through the final sector with Duval! Duval went wide just as Rast did earlier, but overtook Wittmann off the racing line!

All this, as Narain Karthikeyan drove away from them and claimed his first non-championship Super GT race victory, his first win in sports cars, and his first race win of any kind since 5 October 2013, at Brno Circuit during the Auto GP World Series’ final round! If the second-place finish that he and Tadasuke Makino achieved at Sportsland Sugo in September felt great for Karthikeyan and Nakajima Racing, this win, purely for pride, was just as special, for a long-beleaguered team to send the midship NSX-GT out with a win in its last race, as Karthikeyan’s accomplishment headline news in the Indian press. 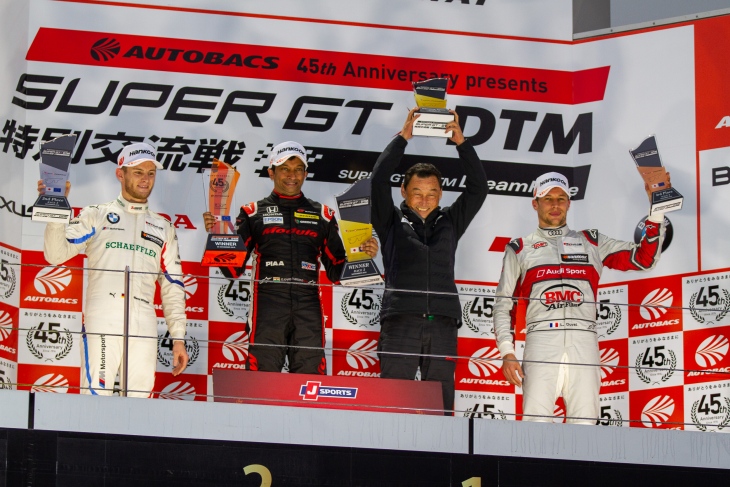 Karthikeyan said after the race: “Our car immediately felt good on the Hankook tyres, so we thought we’d have a chance to fight at the front. Still, it was fantastic to find we were quick in all conditions, to win the race was just a dream come true. Having this joint race between Super GT and DTM has been very special, the DTM drivers are fantastic, so this was fantastic exposure for both series.”

As for Wittmann and Duval, Duval’s off-track overtake netted him a one-second penalty that put Duval behind birthday boy Wittmann, now 30 years old today and salvaging a podium from what looked to be a wretched weekend for BMW at the Dream Race!

“Until today, the weekend had been quite difficult for us,” said Wittmann. “We struggled quite a lot on Friday and Saturday; and were a bit unlucky with our strategy yesterday. But today it all went to plan, especially coming through from seventh. It was an action-packed race, really good fun, and a great show and good entertainment for the spectators.” 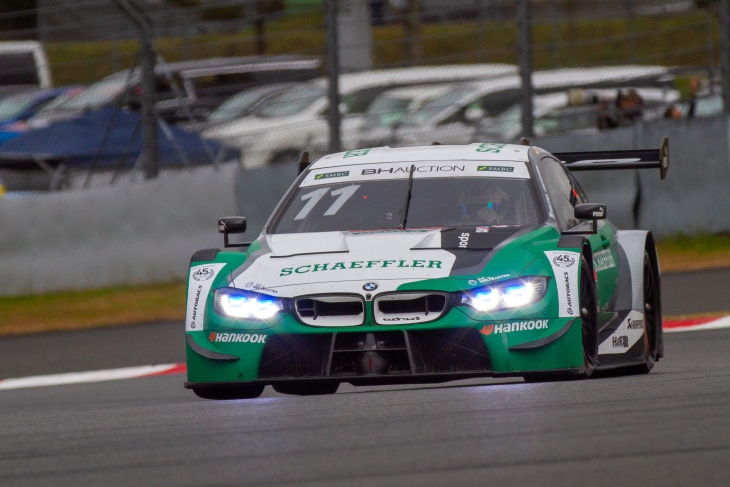 “That last lap was really special, even in DTM we don’t see those sorts of fights too often. Fighting with Loïc was really, really good fun: I knew he was on fresher tyres, but I was going to defend like hell to keep second place. It was a good fight, the last three corners particularly, which is what everyone wanted to see. I think everyone enjoyed today.”

Duval, meanwhile, was still happy to atone for his reconnaissance lap crash on Saturday with a podium on Sunday, making it three different manufacturers on the podium, Honda, BMW, and Audi all together. 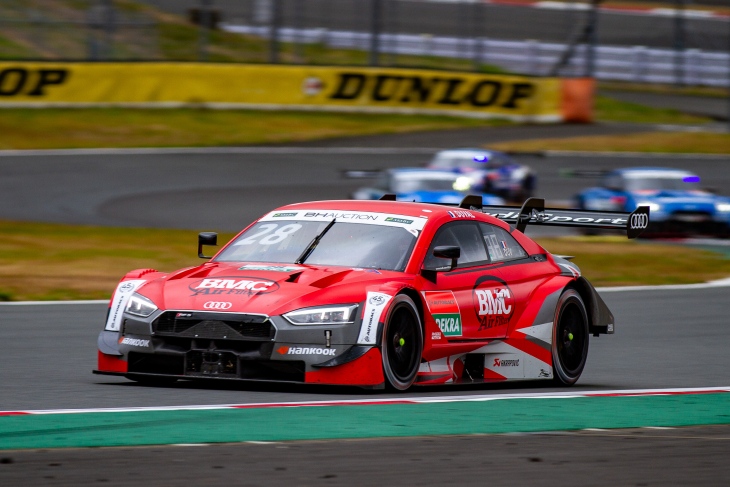 “Today was better than yesterday!” laughed Duval. “I knew the Super GT cars were a bit quicker than us in terms of pace, so I didn’t fight too hard against them at the beginning of the race. Then I got my puncture, at Turn Four, which cost me a lot of time. But due to the Safety Car, I could make my way back up the order, at the last Indy restart I was 13th, with about eight laps to go, it was great fun.”

“Then, on the last lap, I knew I had fresher tyres; nobody’s here to finish second or third, so I went for the win, trying as hard as possible to make it happen. It was a cool race; a really cool last lap, it was a shame to get a penalty, but I was trying everything to get ahead. In the end, we did what we came here for, so, second or third doesn’t really matter. We achieved our target, we had a fantastic time and everyone really enjoyed it.” 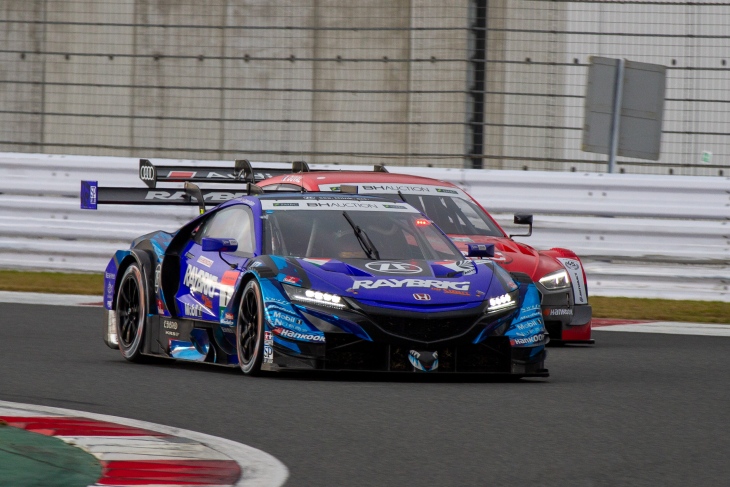 And Daisuke Nakajima, who announced his retirement from racing earlier today after qualifying, came away with a 6th place finish in his final start after a thirteen-year racing career, seven of those years spent racing in Super GT’s top flight. 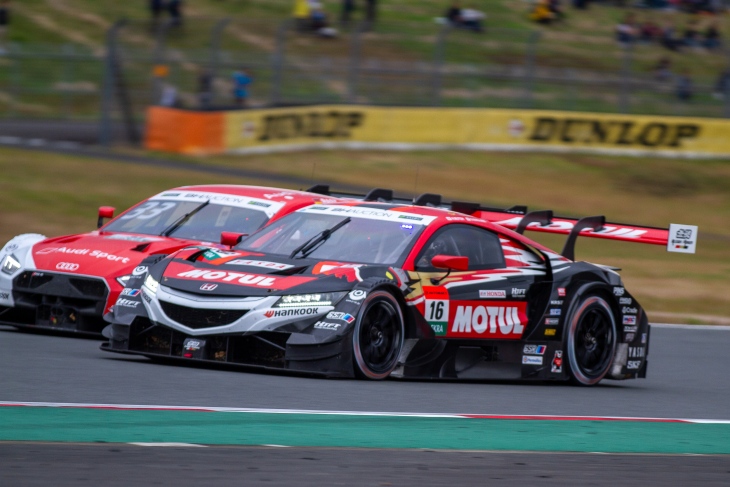 Rounding off the podium were Mike Rockenfeller (#99 Akrapoviç RS5) in 7th, Race 1 winner Nick Cassidy’s co-driver Ryo Hirakawa (#37 KeePer TOM’s LC500) 8th, Rast, who recovered after his puncture and got his lap back in 9th, and Tréluyer 10th despite the extra stop. 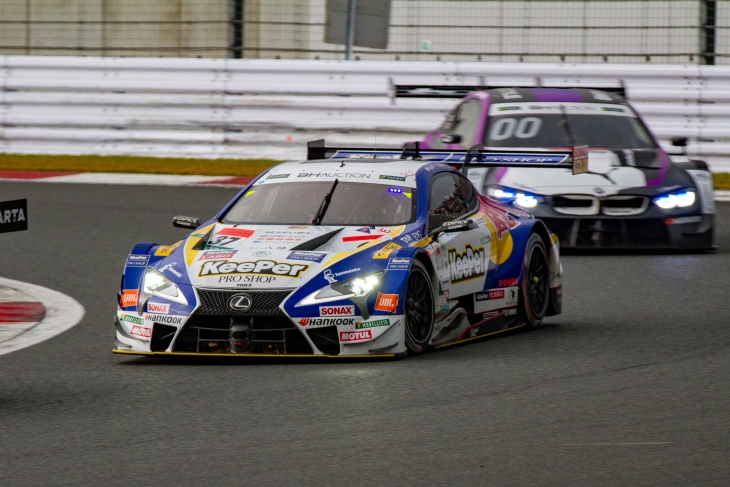 Tsugio Matsuda (#23 Motul Autech NISMO GT-R) was the best of the Nissan runners, coming home 11th, closing out a disappointing weekend for the Nissan camp where none of their cars cracked the top ten in either race.

In total, 51,800 spectators came to Fuji Speedway over three days of practice, qualifying, support events, and racing to see history made at Fuji Speedway with the first-ever Super GT x DTM Dream Race. No announcement has been made yet over when, where, or if a follow-up will take place in 2020, but the overwhelming consensus is that this race was a hit for the drivers and spectators alike. 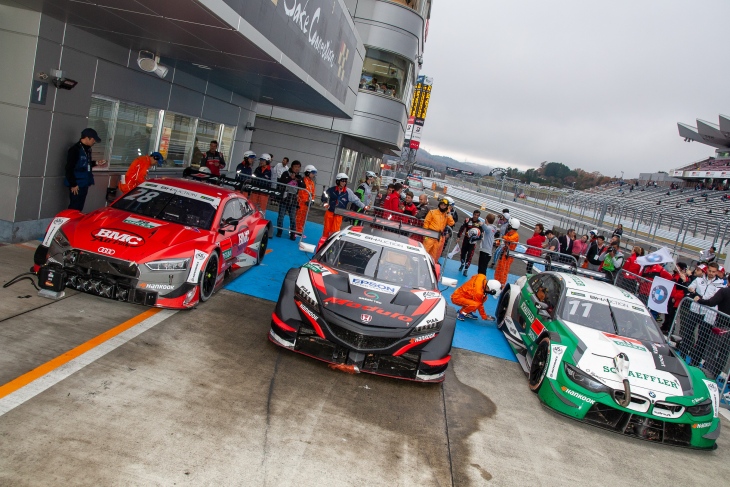 It took ten years of talks just to converge upon this dream race, and the reality may have been better than the dream that was envisioned long ago.