A ceremony held at the Automobile Club de France in the heart of Paris this evening saw 29 champions from the world of endurance racing inducted into the FIA Hall of Fame.   The Champions recognised at the ceremony were:

27 of the 29 were present in Paris, the late Stefan Bellof, who won the title in 1984 with Porsche, was represented by his brother Georg on the stage (below) and 1991 Champion Teo Fabi was unable to attend due to a family matter. 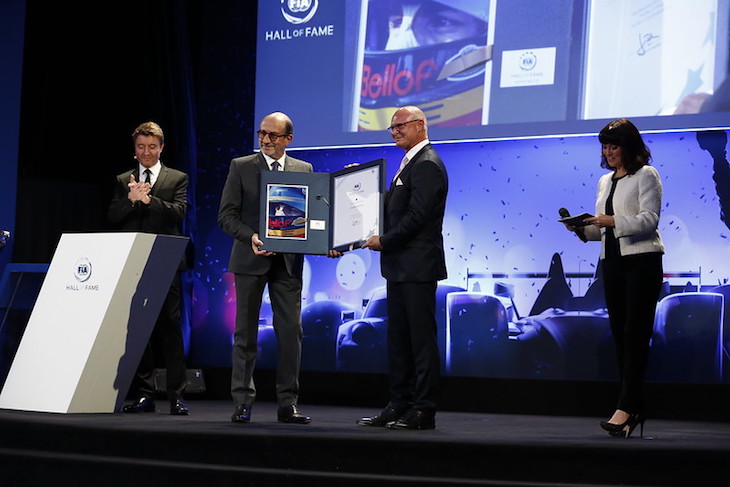 The first Champion, from 1981, now 86 year old Bob Garretson was the first driver to be inducted. 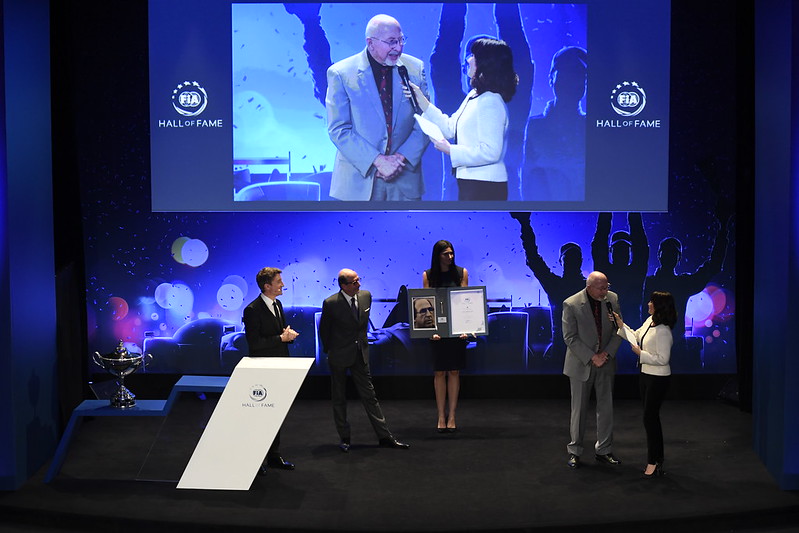 Next driver on stage was Germany’s Hans-Joachim Stuck, who won the World Endurance Championship title in 1985 alongside Britain’s Derek Bell for Porsche.

Brazil’s Raul Boesel and Britain’s Martin Brundle were next on stage to celebrate their titles won with Jaguar in 1987 and ’88 respectively.

1990 title-winner with Sauber Mercedes Mauro Baldi was followed by four-time Le Mans winner Yannick Dalmas who became World Champion in 1992 with Peugeot and the French driver was the next to appear on stage, followed by his teammate, Britain’s Derek Warwick.

It was then the turn of the double World Champions from the 1981-92 era, Jacky Ickx and Derek Bell.

The Belgian driver won the world title in 1982 and repeated the feat in 1983, on both occasions driving for Porsche. 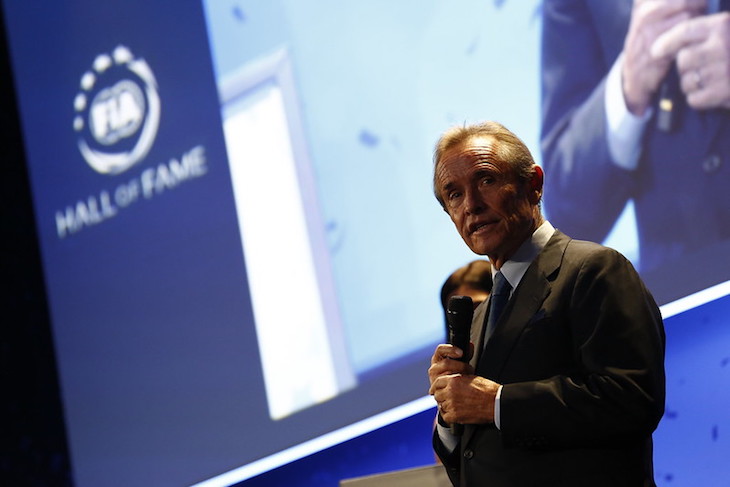 British racer, Bell, took back to back championships in 1985 and 1986, the first alongside Hans-Joachim Stuck.

Similarly to Ickx, both his titles also came behind the wheel of Porsche machinery.

Jean-Louis Schlesser was the third double World Champion to be inducted into the FIA Hall of Fame.

The French driver won the title in 1989 with Sauber Mercedes, repeating his achievement in 1990 alongside Mauro Baldi.

The FIA World Endurance Championship was then reintroduced twenty years later in 2012.

The first title-winners of the new era were Swiss driver Marcel Fässler, followed by Germany’s André Lotterer and then France’s Benôit Tréluyer, who won the title with Audi.

Next on stage were the 2013 champions, with French driver Loïc Duval, followed by Scotland’s Allan McNish and Denmark’s ‘Mr Le Mans’ Tom Kristensen, who added a World Championship to his record nine victories at the 24 Hours of Le Mans that season. 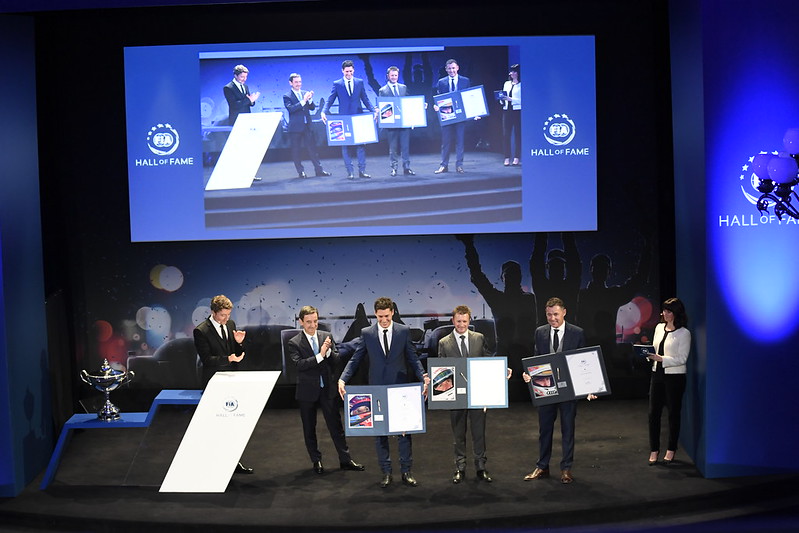 The Audi drivers were succeeded on stage by Britain’s Anthony Davidson, who won the title for Toyota alongside Switzerland’s Sebastien Buemi.

It was then the turn of the Porsche LMP1 racers, starting with Mark Webber, the 2015 World Championship winner for the German sports car maker alongside his teammates New Zealander Brendon Hartley and Germany’s Timo Bernhard.

Romain Dumas was the next driver on stage, the French driver winning the 2016 title alongside his Swiss teammate Neel Jani and Germany’s Marc Lieb.

Porsche made it three in a row in 2017, with New Zealander Earl Bamber.

It was then time to recognise drivers who took the glory in the first-ever Super Season, held across two calendar years in 2018 and ’19, starting with Kazuki Nakajima, who took the honours for Toyota.

The stage then welcomed double World Champions from the 2012-19 era of the World Endurance Championship.

2014 winner Sebastien Buemi was the first amongst those with two modern era titles to his names.

Germany’s Timo Bernhard won the title in 2015 alongside Mark Webber and Brendon Hartley. In 2017 he repeated the feat, again with Hartley and with another Kiwi, Earl Bamber.

Brendon Hartley was next on stage to celebrate his 2015 and 2017 World Championships for Porsche.

The final driver celebrated was Fernando Alonso, the 2018/19 FIA World Endurance Drivers’ Champion being inducted into the FIA Hall of Fame for the second time, the double Formula One World Champion the only driver to have achieved this honour.

Outside the Automobile Club de France and the neighbouring FIA HQ were four championship-winning cars from the different eras being celebrated:

The FIA Hall of Fame gallery is located at the FIA Headquarters in both Paris and Geneva. Also, a dedicated website celebrates the exceptional careers of the 33 Formula One World Champions who were the inaugural inductees in 2017, the 17 World Rally Champions earlier this year and now the 29 FIA World Endurance Champions.

More to come from several of the Champions later this week.