In the bombshell story of the 2019-20 Japanese auto racing offseason, auto sport Magazine is reporting that Team LeMans will part ways with Toyota Gazoo Racing just a month after winning the GT500 Drivers’ Championship in the Autobacs Super GT Series with Kazuya Oshima and Kenta Yamashita.

Team LeMans’ agreement with Toyota will end after this weekend’s Toyota Gazoo Racing Festival at Fuji Speedway, ending a relationship dating back to the 1999 season. The championship-winning number 6 Wako’s 4CR Lexus LC500 will make its final on-track appearance this Sunday at Fuji.

Toyota will still continue with a six-car fleet of new Toyota GR Supra GT500s for the 2020 season, however. Toyota Team Cerumo will expand to a two-car effort, and Oshima, along with title sponsor Wako Chemical, will go to the second Cerumo car – and Oshima will also bring the champions’ number 1 along with him that he’d earned with Toyota last year. It is not yet confirmed, but team principal Juichi Wakisaka and chief engineer Kazuya Abe are likely to come over to the new team as well.

Sho Tsuboi, who drives for Cerumo in the Super Formula Championship, is expected to join Oshima at the new Toyota Team Wako’s Cerumo squad for 2020. Yamashita is expected to leave Super GT to focus his sports car racing commitments squarely on the FIA World Endurance Championship.

The story has been an open secret for months within the paddock, the result of a bitter falling out between Toyota and Team LeMans’ ownership, though nothing more than speculation has surfaced as to what ultimately drove the two entities apart.

Team LeMans’ ownership recently changed hands over the last year following founder and president Hiroyoshi Donuma’s retirement from the company. Masafumi Ohta, who succeeded Donuma as president of Team LeMans Co. Ltd, also serves on the board of directors of Aska Corporation – alongside Aska Corporation President & CEO, Yoshinori Katayama, who is also the president of Okayama International Circuit, and the father of Yoshiaki Katayama, who drives in the All-Japan Formula Three Championship for a team owned by the circuit that the elder Katayama operates. 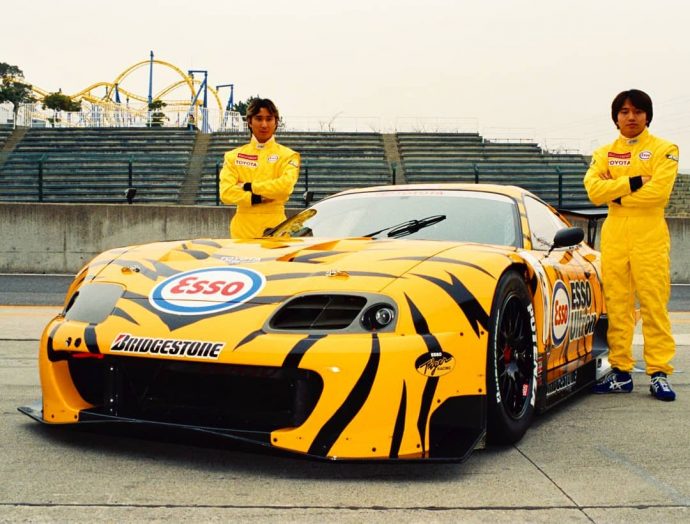 Founded in 1969, Team LeMans’ partnership with Toyota began in 1999 with the yellow and black number 6 Esso Ultron “Tiger” Toyota Supra.

The car was to have been driven by F1 veteran Hideki Noda, and 1998 GT300 Champion Shingo Tachi. But when second-generation driver Tachi died after a testing accident at Okayama International Circuit 11 March 1999, the team’s entry was delayed to the second round of the season. 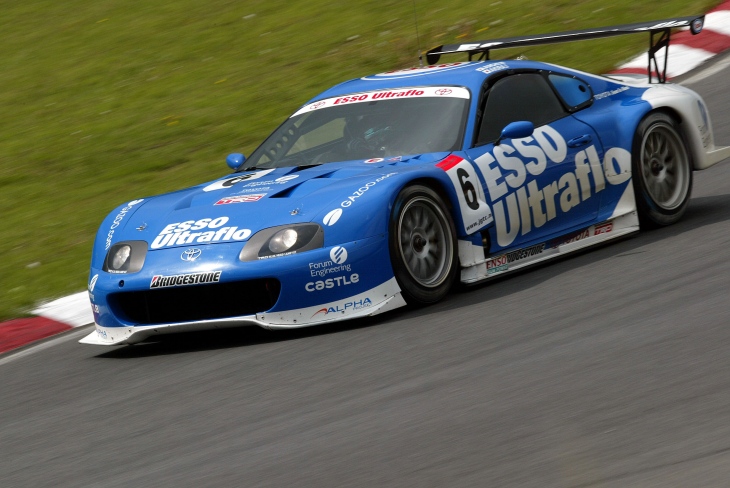 The team became championship contenders thanks in key part to two noteworthy defectors from Honda: Juichi Wakisaka, who joined Toyota and replaced Gardner at Team LeMans in 2001, and Akira Iida, who came over from Honda the following year, in 2002.

2002 saw Wakisaka and Iida win the third round at Sportsland Sugo, and carry that momentum on to the final round at Suzuka Circuit where they won Team LeMans’ first GT500 title, by just a single point – a bonus point for setting one of the three fastest laps of the race – over Nakajima Racing drivers Ralph Firman and Tsugio Matsuda.

They looked set to repeat as champions in 2003 off the strength of two wins in the first three races and carried a five-point lead going into the last race of the season, before conceding the championship to NISMO teammates Satoshi Motoyama (who became the second-ever “Double Champion” of Japan) and Michael Krumm.

Those wins in 2003 would be their last for a long time, but in 2010, Team LeMans, now clad in the orange and red of new title sponsor Eneos and led by a new duo of Daisuke Ito and Björn Wirdheim – rode a string of five straight top-five finishes to the top of the points table, but would fail to score in the next two rounds and slumped to fourth in the standings. 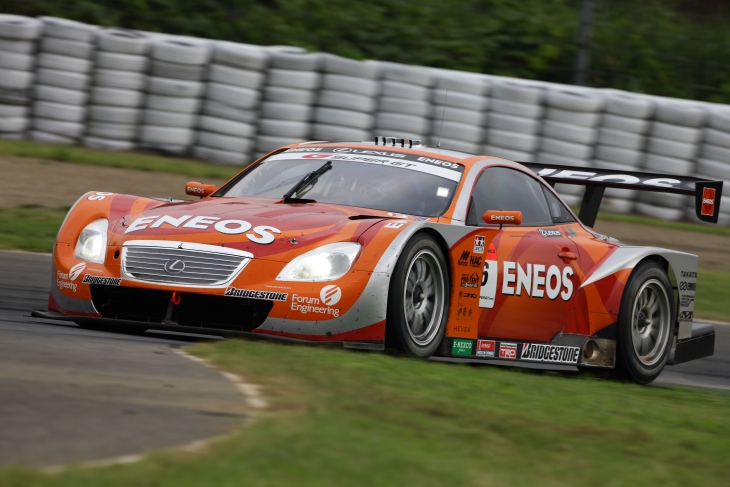 Donuma stepped down from his post as team principal at the end of the 2010 season and was replaced by legendary former driver Takuya Kurosawa, working alongside chief engineer Kenji Yamada, who joined the team in 2009.

Young Toyota star Kazuya Oshima joined the team in 2011 to replace Wirdheim, and in 2012, he helped end Team LeMans’ nine-year winless drought by winning at Sportsland Sugo in a close fight for the win with Kazuki Nakajima.

In 2013, Donuma rejoined as Team Principal. Oshima and new co-driver Yuji Kunimoto won the season finale at Twin Ring Motegi – the last race in the 3.4-litre V8 era, after which, the start of the NRE (Nippon Race Engine) era brought on another lengthy winless drought and another massive change in leadership. 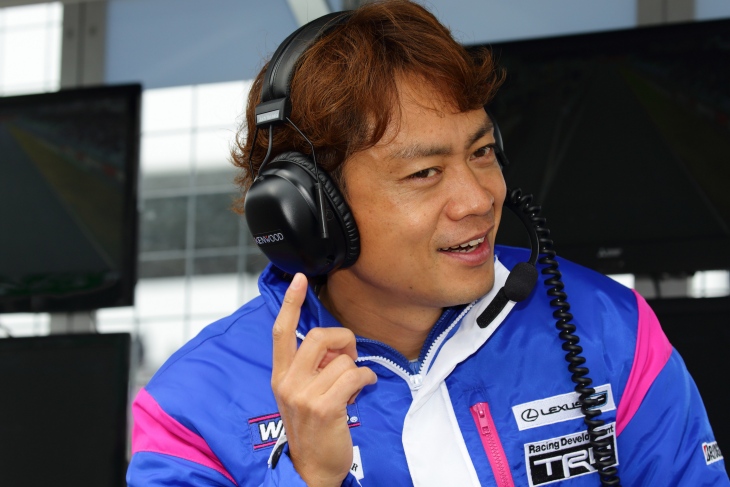 Wakisaka, who helped drive Team LeMans to their 2002 title, replaced Donuma as team principal upon his retirement from Super GT driving in the 2015-16 off-season. His expressive, colourful personality made him a fan favourite team boss instantly. And Oshima, with new teammate Andrea Caldarelli, brought them back into championship contention over the 2016 and 2017 seasons.

They had another solid year in 2017, with four podium finishes, but ranked 2nd going into the final race at Motegi, their championship hopes evaporated after an early spin, and Oshima finished 3rd with Caldarelli departing the series at year’s end to focus solely on his new duties as Lamborghini factory driver.

The 2018 season started with immense promise as Felix Rosenqvist joined Oshima that season, but the year was marred by the sudden and tragic passing of chief engineer Kenji Yamada on 22 April 2018 during a Super Formula race meeting. They would only score one podium all year, and Rosenqvist would depart for the IndyCar Series at year’s end. 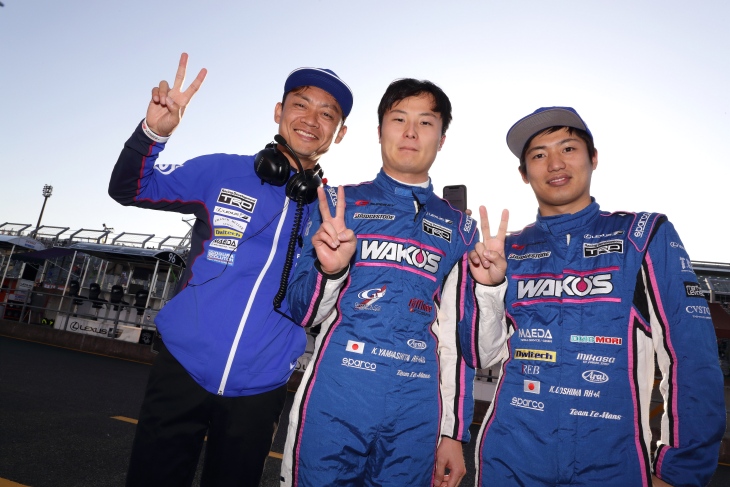 But the acquisition of Kenta Yamashita, who turned 24 in August, proved to be an inspired one, as did the hiring of new chief engineer Kazuya Abe from Team Mugen. Oshima and Yamashita scored a third at Suzuka, then rattled off back-to-back victories: The first, at Chang International Circuit in Thailand, broke their five and a half year winless drought. The second, at the Fuji 500 Mile Race, cemented a championship lead that they would retain until the end of the season.

The Fuji 500 Miles victory turned on a fortuitous decision to dive into the pit lane just before it closed following a Safety Car intervention during a routine pit cycle just past the halfway point in the race. Despite protests from rival drivers about whether they’d actually come into the pits before or after the Safety Car board was displayed, the victory stood and the team amassed a whopping 16 point championship lead.

On heavy ballast, they added two more top-six finishes at Autopolis and Sugo, and needing a second-place finish to clinch the championship in the season finale at Motegi, Yamashita sealed the requisite title-clinching spot with a sensational pass through the grass on Yuhi Sekiguchi and drove Team LeMans to their first title in 17 years. 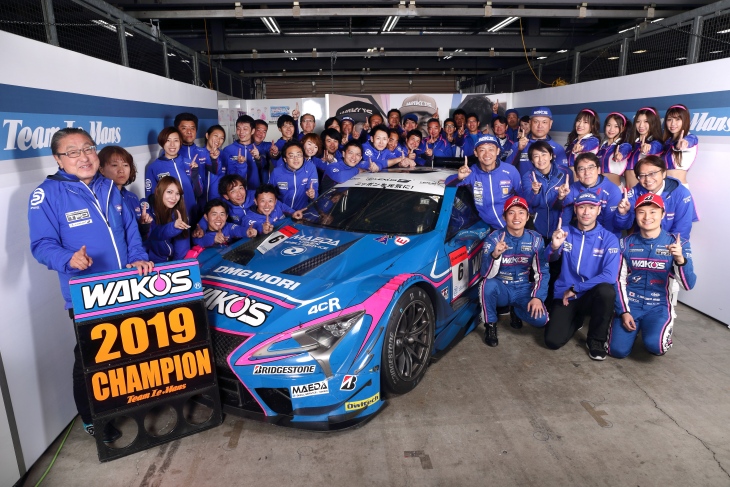 In twenty-one seasons, Toyota/Lexus Team LeMans scored nine victories together in GT500 competition, plus a non-championship win in the 2002 Suzuka 1000km.

Team LeMans’ split from Toyota also means the end of their run in Super Formula after over 40 years. They won their first championship with the late Keiji Matsumoto in 1978, then two more in the modern era, with Ralf Schumacher in 1996 and Satoshi Motoyama in 1998.

Team LeMans also fielded cars for the likes of nine-time Le Mans 24 Hours winner Tom Kristensen and gave seven-time Formula 1 World Champion Michael Schumacher his one and only entry into the series.