Toyota Gazoo Racing stormed to victory in the 8 Hours of Bahrain, the last WEC race of the decade, finishing 1-2 after trouble struck both Rebellion and Team LNT and left the TS050 HYBRIDs to cruise to the line.

On this occasion, the #7 of Mike Conway, Jose Maria Lopez and Kamui Kobayashi finished ahead of the #8, leading every single lap of this one. A collision at the start between the two front-row-sitting cars, the #1 Rebellion R-13 of Bruno Senna and #6 Ginetta G60 of Charlie Robertson, resulted in Conway inheriting the lead by Turn 3. From then on it was a relatively easy victory, handing the winning trio an eight-point lead in the standings heading into the second half of the season.

“We had a tough week in the beginning but made it in the race. We had great pace, it was a great performance from all the guys,” Kobayashi said after the race.

All three privateer cars hit trouble in this one. The #1 Rebellion lost time due to a gearbox issue, and finished third, three laps down. Both Ginetta’s meanwhile suffered worse issues, the #6 stopping out on track (and retiring) with an electrical issue. The #5 was boxed with a mechanical issue too, which the Team LNT mechanics spent much of the final two hours fixing.

As for the #8 Toyota that finished second, damage sustained in the Lap 1 incident cost it time, which it would never regain. Brendon Hartley, Sebastien Buemi and Kazuki Nakajima would have to settle for second, crossing the line a lap back from the sister car.

“We picked up damage with the beginning, we were hoping to fight the other car even with success handicap. But we also have damage to the floor, so it’s been damage limitation. We couldn’t do much more today,” Hartley said.

LMP2 saw a dominant run too, United Autosports’ ORECA winning from pole. Paul Di Resta in arguably his best performance in a sportscar, Phil Hanson and Filipe Albuquerque were all masterful and made zero mistakes. They created a minute lead during the middle of the race, which shrunk to under 20 seconds in the closing stages. 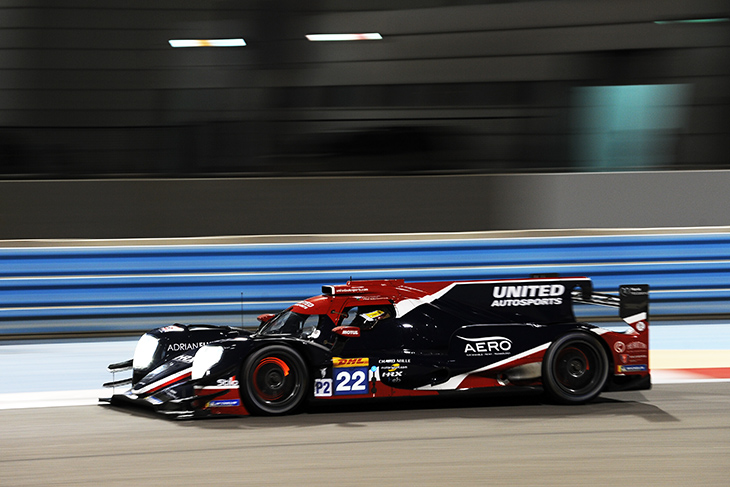 But the team managed its Michelin tyres and the race. When Anthony Davidson in the JOTA ORECA came within striking distance of Di Resta, the Scotsman gapped him again, before Albuquerque got in for the final stint and created a lead of 21 seconds by the end of the race. United Autosports’ first FIA WEC victory was well deserved here and puts Hanson and Albuquerque second in the points.

In what Hanson said was the biggest victory of his young career, he revealed that the team “lost time in the pits” and still powered to victory. The Goodyears looked to be stronger than the Michelins when the temperature drops, but by then it was too late for JOTA’s two ORECAs.

After losing significant ground at the start, JOTA finished second and still picked up vital championship points, ahead of JOTA’s sister car, the Jackie Chan DC Racing ORECA, that completed the top three and scored JOTA and Goodyear a double podium. The #37 JCDC crew of Will Stevens, Ho Pin Tung and Gabriel Aubry lead the standings ahead of Lone Star Le Mans.

The guest-entered G-Drive Aurus finished fourth, recovering well after struggling with tyre degradation early. Jean Eric Vergne came close to snatching third from Will Stevens at the end, but the Frenchman couldn’t quite catch him and had to pit for a splash on the last lap.

Elsewhere, it was a tough race for Fuji winner Racing Team Nederland, it was a run that Frits van Eerd was confused by. “I don’t know why (we’re more competitive in Bahrain) Everyone is so fast here. Me as a Bronze driver I have to push very hard. It’s more competitive in this class than what we thought when the season started.” The all-Dutch trio of van Eerd, Nyck de Vries and Giedo van der Garde finished sixth behind the Alpine.

The best racing was found in GTE Pro, which delivered on-track battles and championship drama. While this race was far from a classic in three of the four classes, Pro was superb with the three podium positions not decided until the final hour.

Winning the race was the #95 Aston Martin Vantage AMR of Nicki Thiim and Marco Sorensen. It was a rollercoaster race for the Danish duo, who were in the fight one stint, and at the bottom of the order the next. 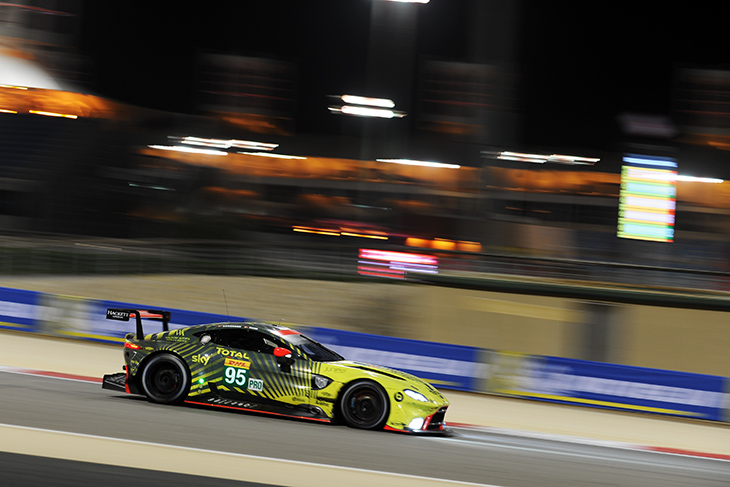 But by the end of race, in what turned into a dogfight between AF Corse’s Ferraris and Aston Martin Racing’s Vantages, the #95 prevailed, Sorensen leading home the win, under no pressure in the closing minutes after a stop-go penalty was handed to the chasing #71 Ferrari of Miguel Molina for spinning wheels at a pit stop.

Finishing third behind the #71 was the #97 Aston Martin, Maxime Martin claiming the final podium spot after the #51 AF Corse Ferrari was ordered to hand back third to Martin for overtaking him while exceeding track limits.

“We didn’t have the pace to win here, but sometimes the smartest teams beat the fastest teams,” Thiim said.

Where was Porsche in all this? Both cars hit trouble, within 10 minutes of each other just before the halfway mark. The #92 911 RSR 19 came in with mechanical trouble first. “Kevin Estre reported some issues with car behaviour in last two laps, so we had to look at the car, we’ve had to change a damper,” Michael Michael Christensen said.

Moments later the #91 was also forced to pit for hasty repairs after a puncture.

“I don’t know what happened as I was out of the car, after the stop Gianmaria (Bruni) reported a puncture, we have damage on the underfloor now. Now the time lost is so much that it’s just about finishing,” Richard Lietz explained.

This is huge in the championship fight, as the two Porsches were sitting 1-2 in the standings heading into this race, which is worth 1.5x points. Both cars finished, but off the lead lap in the class in fifth and sixth. Sorensen and Thiim now lead the Drivers’ Championship, and Aston leads Porsche in the Manufacturers standings by 11 points.

Project 1 stars in Am

GTE Am, like the LMP classes, saw a dominant performance too. This time it was from the #57 Project 1 Porsche. Larry Ten Voorde, Ben Keating and Jeroen Bleekemolen didn’t put a foot wrong. 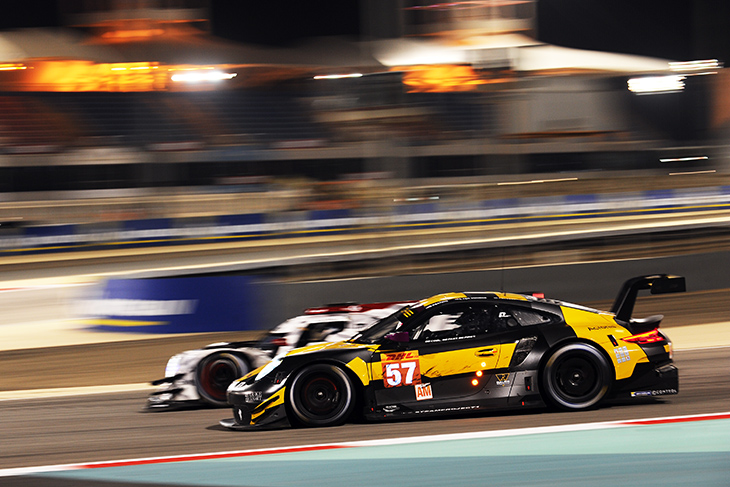 Keating starred here, driving almost three hours at the start of the race, which put the team in position to ease to victory. He was so fast through his time in the car that the team opted to keep him in for longer than the other Ams in the class, meaning they saved a stop. It was a drive that Bleekemolen said was “heroic” in the post-race conference.

“That made the difference,” Keating said after the race, “because the gap between us and the #98 was about a pit stop at the end. I think we’re tied with the #83 AF Corse Ferrari for second place in the standings now, amazing when you consider we only scored one point at Silverstone.”

Notably, in championship terms, this was a nightmare outing for TF Sport. It headed into the meeting hoping to take a third straight win, but the pace wasn’t quite there in the race before a gearbox issue forced the car in the garage and into retirement.

To make matters worse, its closest rival before the weekend, the #83 AF Corse Ferrari of Manu Collard, Nicklass Nielsen and Francois Perrodo, finished fourth, and the #57 won, closing the gap. With CoTA and Sebring coming up next, could it be advantage Project 1 for the rest of the season when you consider that Keating and Bleekemolen have know both tracks inside out?

Keating hasn’t been to Spa before, so that will be a challenging weekend. However, that may change soon. “I’m going to try and get to Spa before the WEC meeting,” Keating concluded. “I’ve only ever driven it on iRacing.”

Next up for the WEC teams is Lone Star Le Mans at CoTA next February for a six-hour race (which will be run instead of the cancelled race at Sao Paulo).