Legendary sports car driver Yoshikazu Sunako passed away last Friday, 3 January 2020, at the age of 87. The news of his death was confirmed by his son, Jukuchou Sunako on social media.

Sunako’s life in motor racing began when he got his first job building motorcycles for Yamaha in 1955. Soon, he began work as a Yamaha test rider and, in the years to come, would make a number of race appearances for the factory. Sunako picked up his first podium in bikes in the 1957 All-Japan Motorcycle Endurance Road Race at Mount Asama. 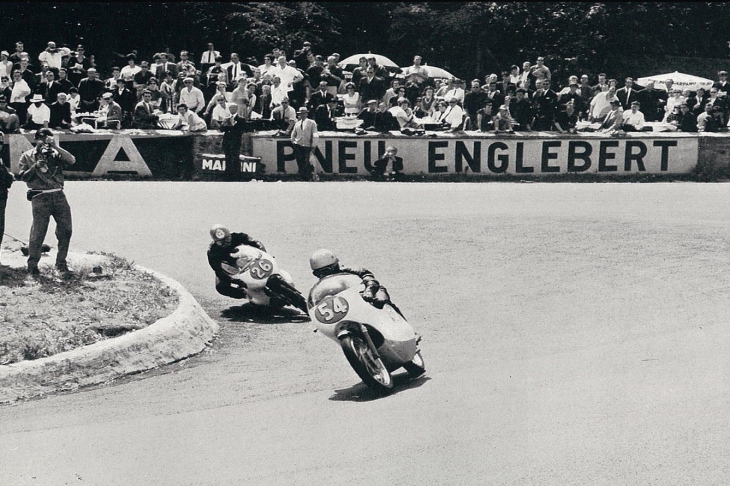 He made three appearances in the 250cc class of MotoGP for Yamaha: 6th in the 1961 Belgian Grand Prix at Spa-Francorchamps, 4th in the 1963 Dutch TT at Assen, and a career-best 2nd in the 1963 Belgian GP taking part in Yamaha’s first-ever motorcycle Grand Prix victory behind race winner Fumio Ito.

Shortly thereafter, Ito recruited Sunako to come to Prince Motor Company, which later became part of Nissan and thus, Sunako made the switch from two wheels to four. And his first race with the factory, the 1964 Japan Grand Prix, would come to define his legacy as well as the racing legacy for one particular model in the Prince/Nissan lineup. 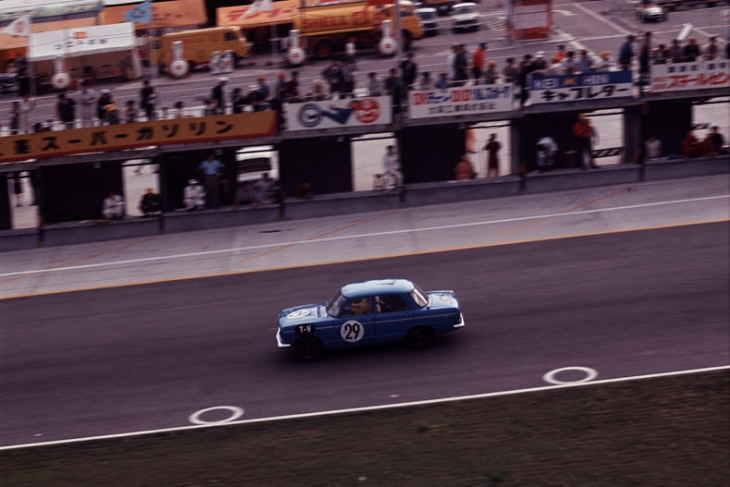 Speaking with writer Ken Lee for Japanese Nostalgic Car in an interview conducted in 2016, Sunako recalled, “I was very excited, but didn’t really know what to expect. I didn’t expect it to be such a historic race.”

Driving Prince’s top-of-the-line performance coupe, the Skyline GT, Sunako finished fourth in the T-V category, then lined up to take the grid in the GT-II class.

Also taking part in the race was a Porsche 904 Carrera GTS piloted by Sokichi Shikiba. This thoroughbred racing car was expected to crush a field of pure production cars, including Prince’s fleet of Skyline GTs which were little more than race modified saloon cars.

Sunako’s teammate, Tetsu Ikuzawa, brought the home crowd to its feet when he passed the Porsche on track seven laps into the race. Shikiba would take the lead and go on to win the race, but Sunako came a close second, just 10 seconds adrift of the Porsche, and heading up a Skyline sweep of the top six places.

“It was a great feeling when Ikuzawa passed the 904,” recalled Sunako. “I thought Prince had a real chance to win the race. However, the Porsche retook him and then I thought it was my job to beat it. After signalling to Ikuzawa, I went absolutely flat out chasing the 904, and eventually came second with Ikuzawa coming in third 20 seconds later.”

This race was the genesis of the “Skyline Legend”, which carried on into the successive Skyline GT-R models that would come to dominate motor racing for decades to come.

And it would also inspire Prince to build a thoroughbred racing prototype just like the Porsche 904, one that Sunako would drive to the biggest win of his career.

Prince built their first prototype sports car, the R380, which made its debut in the 1966 Japan Grand Prix, now held at the all-new, ultra-fast Fuji Speedway. “In the period after the [1964 Japan Grand Prix], it really lit a fire under the team as they realized the potential of the Prince as a racing name, and the R380 was born as a result.” 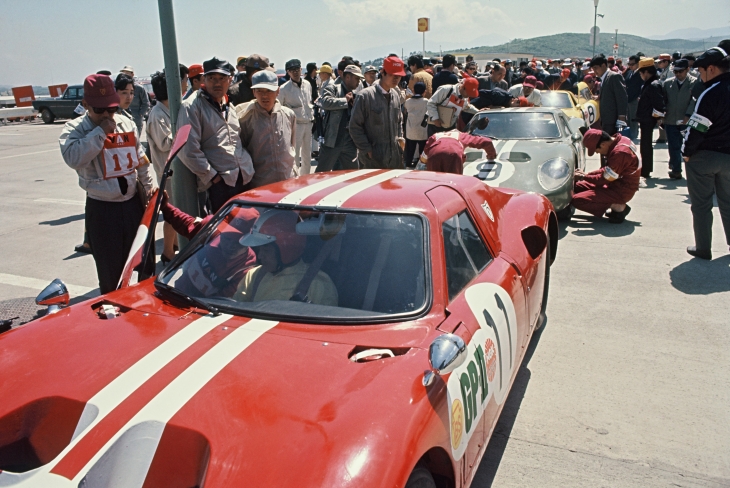 Sunako drove one of Prince’s four new R380s, the red and white-striped number 11, to a dominant 1-2 victory, taking the win by three laps over teammate Hideo Ohishi, and defeating the Porsche 906 of Shintaro Taki that crashed halfway into the race.

The 1966 Japan Grand Prix would come to be Sunako’s signature victory in his auto racing career, and a game-changer for the Japanese automotive industry which showed that they could build a car to rival even the best western-built prototypes. Three months later, Prince would be acquired by Nissan, and the work done on the R380 project would be picked up by Nissan going into the 1967 season. 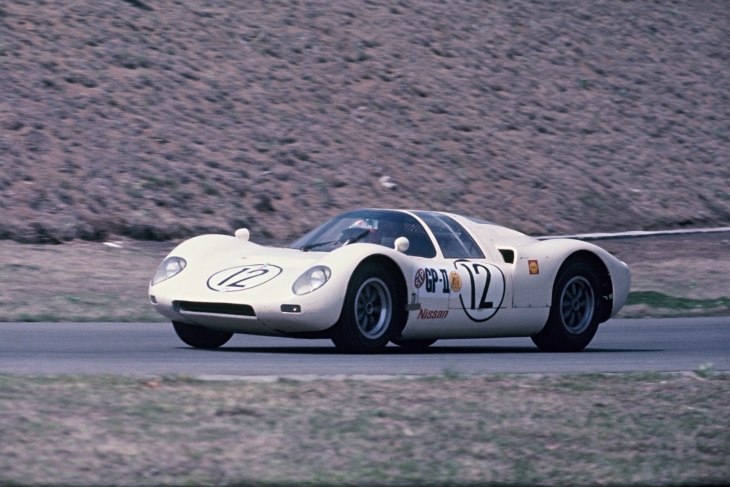 The modified Nissan R380A-2s would finish 2nd, 3rd, and 4th in the 1967 Japan Grand Prix at Fuji, as Tetsu Ikuzawa, now driving a Porsche 906, won the race. Sunako finished third in his white number 12 R380A-2, behind his teammate – another driver who’d made the switch from motorcycles to car racing, Kunimitsu Takahashi.

The Group 7 regulations – the ones which formed the basis of the Canadian-American (Can-Am) Challenge Cup on the other side of the Pacific, were soon embraced in Japan and allowed Group 7 cars to enter the 1968 Japan Grand Prix at Fuji.

This is the race that became famous for the “T-N-T Showdown” between Toyota, Nissan, and Taki Racing’s Lola T70s. In this case, the “N” introduced the R381, with its massive split rear wings, and it’s Chevrolet V8 engine. Two were entered, one for Sunako, and one for teammate Moto Kitano. 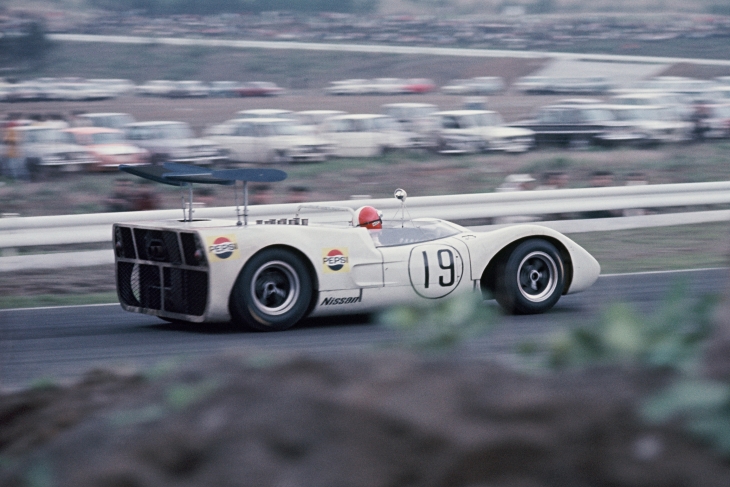 Nissan won the T-N-T Showdown and with it won the ‘68 Japan Grand Prix, their second win in three years including the Prince lineage. Kitano’s car with the yellow rear wings won the race, and Sunako, with the blue-winged R381, finished in 6th, three laps down, hampered by overheating issues that began in qualifying. 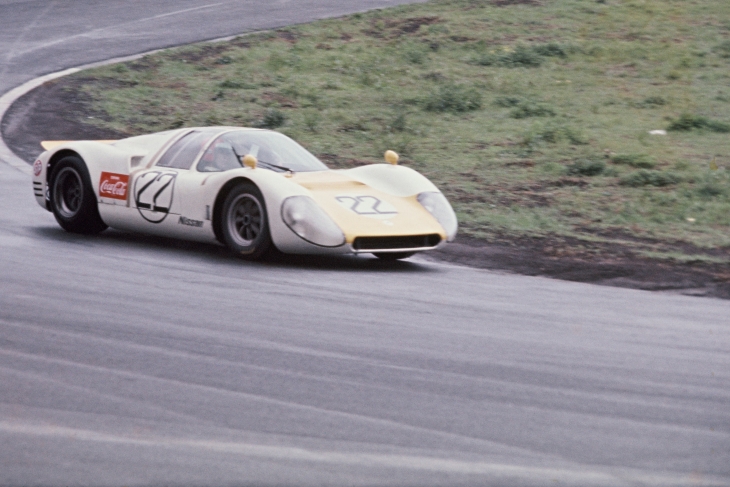 Sunako would once again take a podium in his R380 in the 1969 Fuji Speed Cup, bringing up the end of a Nissan R380 podium sweep behind winner Moto Kitano, and second-place driver Motoharu Kurosawa.

That same year, the R381 Group 7 car evolved into the meaner, more powerful R382, now with a 6-litre V12 pumping out over 600 horsepower and three of them were entered into that year’s Japan Grand Prix at Fuji.

For 1969, the Japan Grand Prix was moved to October and extended to a 720-kilometre endurance race. This meant that teams could now register two drivers to a car, and Sunako was joined with Kurosawa in the yellow number 21 R382. 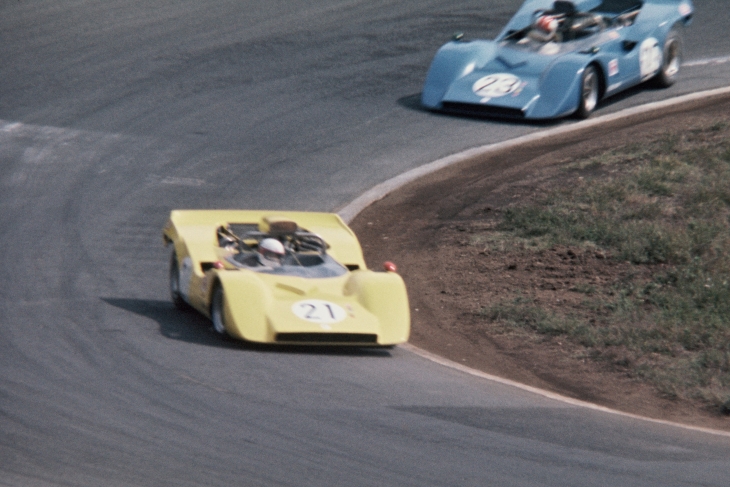 Kurosawa drove all 120 laps of the 1969 Japan Grand Prix, and even though Sunako’s skills were never needed during the race itself, he was still credited with a share of the victory in a 1-2 finish for Nissan.

After the deaths of Toyota drivers Sachio Fukuzawa and Minoru Kawai in testing accidents, Group 7 cars in Japan were consigned to the history books, though Sunako continued his racing career with Nissan. 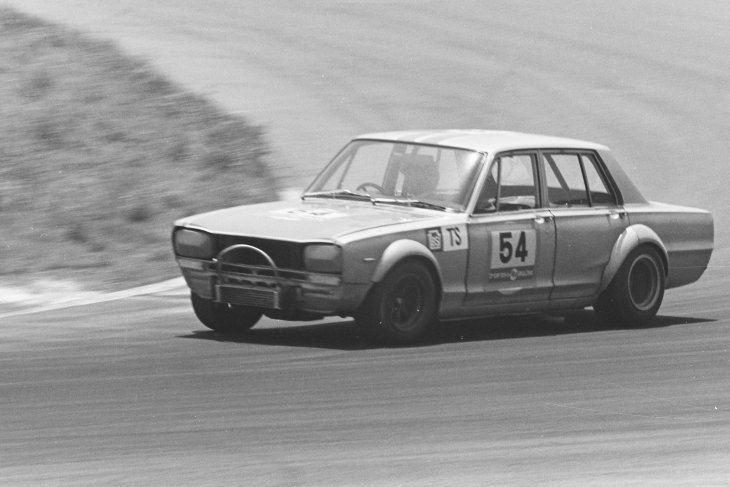 Sunako would take GT-2 class victory and third overall in the 1969 Suzuka 1000km driving with Kunimitsu Takahashi in a Nissan Fairlady 2000 coupe, and a TC-3 class victory, and a second overall finish, in the 1970 Fuji 1000km alongside another Nissan factory racing ace, Masahiro Hasemi, in their Nissan Skyline 2000 GT-R.

The 1971 Fuji Tourist Trophy Race would be Yoshikazu Sunako’s final professional race before his retirement from driving, as he would soon take up a management role with the Nissan factory team. 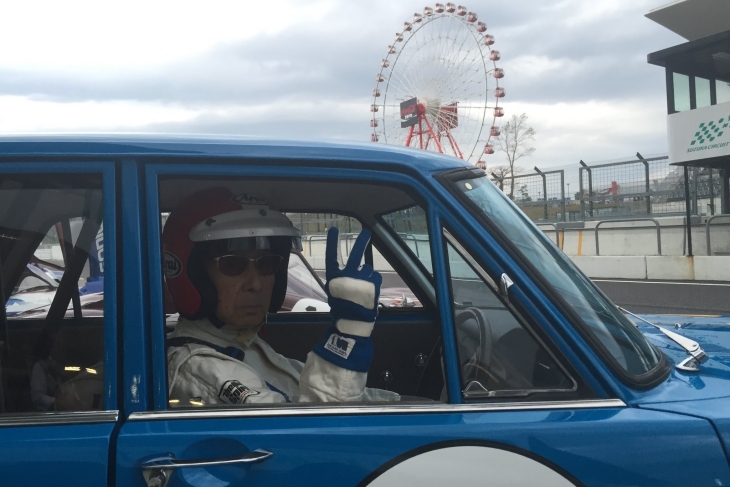 As recently as 2016, Sunako continued to appear at car shows including the annual NISMO Festival – seen in his favourite cossack hat that he’d received as a gift from a Russian woman named Natalie, and none of his signature cars were too far behind, including the sky blue ‘64 Skyline 2000 GT that was restored in 2012, or the winning ‘66 R380A-1, which was restored in 2013.

He even attended a year-end party for legendary Japanese racing drivers just three weeks ago in Tokyo.

Sunako’s family legacy would continue in racing through his son Jukuchou, who raced in the GT300 class of Super GT for eleven seasons, won the 1996 Super Taikyu Class 1 Series Championship driving a Nissan Skyline R33 GT-R, and in the SRO GT World Challenge Asia, drove BMW Team Studie to the GT4 Teams Championship in 2018 and himself to the GT4 Drivers’ Championship this past year.

His individual legacy will be that of a trailblazer for sports car racing in Japan, the driver that spearheaded the birth of the legend of the Nissan Skyline, the driver to take the first victory for a Japanese built prototype sports car, and for helping to lay the foundation for Nissan and NISMO’s sports car racing successes for years to come. 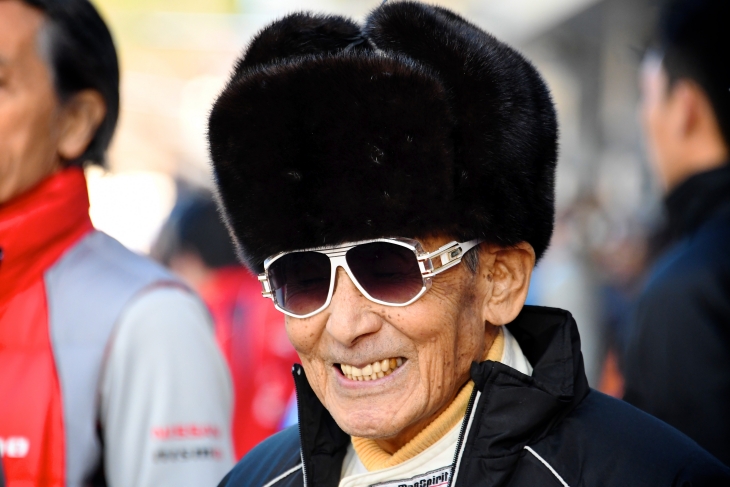 We at DSC wish to extend our sincerest condolences to the family, friends, and loved ones of Yoshikazu Sunako.