Oliver Jarvis has put the #77 Mazda RT-24P on pole for the 2020 running of the Rolex 24 Hours, besting the rest of the field by four-tenths of a second but falling just .026 seconds of besting the track record he set last year.

“What a car they just gave me, I cannot say thank you enough,” Jarvis said. “This year feels different. Last year we had a huge amount of emotion, this year was like ‘come in and do a job’ and we’ve done it.

“I honestly thought the track record would go but with the weather we’ve had the track wasn’t quite there,” Jarvis explained.

The Briton added that the atmosphere within the team has changed since they began to find wins last season, “this feels more business-like,” Jarvis said.

Jarvis initially set a time of 1:33.712, but he bettered it by 0.001 seconds on the next lap, leaving a time of 1:33.711 at the top of the scoring sheets. The session was shortened slightly by a red flag that was caused by Ricky Taylor in the #7 Acura Team Penske ARX-05c

Taylor went off at the bus-stop chicane and the car hit the tyre barriers nose-first at considerable speed. The extent of the damage was not immediately known but the crash structure at the front of the car appeared intact.

Juan Pablo-Montoya ended the session in second, his best time was a 1:34.154, 0.443 seconds behind the pole time set by Jarvis. Montoya edged out Jonathon Bomarito for a spot on the front row by 0.015 seconds.

Like many drivers point out, the starting position for a 24-hour race usually means little, but for Mazda having their two cars in the front while Acura and Cadillac are spread further back bodes well for Mazda to have a clean start.

In LMP2, the #52 PR1/Mathiasen Motorsports ORECA 07 secured pole position. Ben Keating set the quickest time in the car, a 1:37.446. Amazingly, this is just the second pole position in IMSA competition for Keating – who is racing both in LMP2 and GTD this weekend. 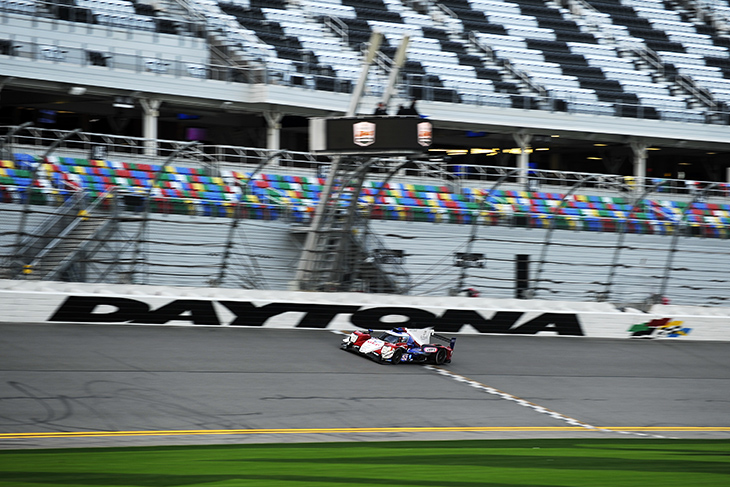 “The only time I ever won this race was from starting in last place, but for the LMP2 class it [pole position] gives quite an advantage because those GTLM cars are right behind us so being in front gives me a little bit more room to warm up my tyres and get going,” Keating said.

“I can sum it all up by just saying I’m having lots of fun!” An exuberant Keating said.

Ending the session in second was the #81 DragonSpeed ORECA 07 with Henrik Hedman setting a time of 1:37.728. Meanwhile, John Farano qualified the #8 Tower Motorsports ORECA 07 in third with a best time of 1:39.275.

The times in LMP2 were not as close to breaking the lap record as they were in DPi. The time of 1:35.904 set last year by James Allen remains the LMP2 track record.

Before the prototypes headed out to set times the two GT classes each had a session.

In GTLM it was Porsche’s day, the new 911 RSR 19 locking out the front row, Nick Tandy breaking his own class lap record in the process. 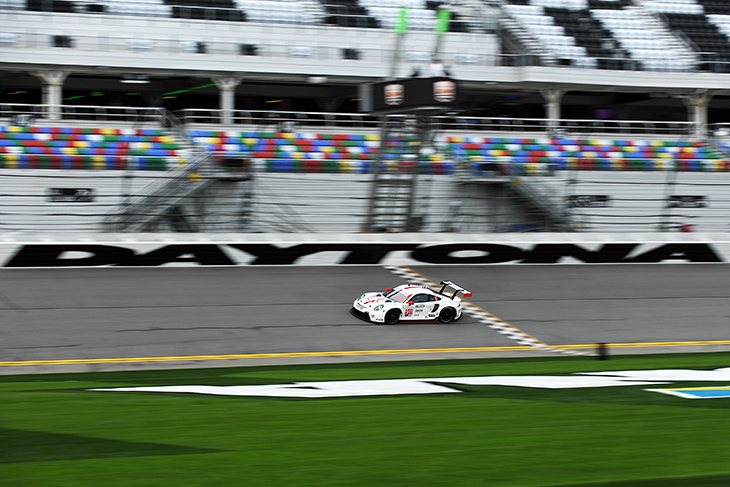 Corvette first out on track in the dry conditions, the #3 and #4 pair looked like they were about to make a statement. Nick Tandy’s Porsche was having none of it though, a 1:48.655 a second quicker than Tommy Milner’s silver liveried C8.R as the pace and the excitement built in what was a typically dynamic GTLM qualifying session.

Boding well for a potentially solid race pace, Phillip Eng sprung into second briefly with a 1:43.329 for the #25 BMW M8 GTE. But the Corvettes had the measure of things and ended up taking the ‘second-row’ of the GTLM starting grid. Just a tenth apart, and comfortably into the 1:42’s, this was a strong first showing for the new mid-engined cars in anger, but still around half a second adrift of the Porsches, which looked particularly well planted. Phillip Eng also crept into the ‘42s for BMW, John Edwards posting sixth for the #24 sister RLL car. Alessandro Pier Guidi’s best was 1.4 seconds off the pole time and the Risi Competizione Ferrari 488 GTE will start from the back of the class grid.

Nick Tandy: “It was a great session, with a team 1-2 vindication of all the work has gone in, not just in our season but for all the work that’s gone into the new car. Coming to Daytona you don’t know how it’s going to stack up. Conditions this afternoon didn’t help much, we didn’t know quite where the grip was going to come in, so to get the times dialled in quickly during that dry session was good.

Daytona is one of the biggest, most prestigious events in the motorsport calendar. Porsche haven’t won in the GTLM class so to take the front row is very encouraging.

The set up between the cars is almost identical, there’s maybe 0.5% difference in suspension set up but it’s so minimal… both went out on same tyre spec even though we have options.

The car is improved in every area, the aero package is improved particularly and there has been a lot of work in the longevity of engine performance. A lot of stuff has gone into reliability: gearbox, powertrain, etc.

BMW has had another year of development with their car and obviously the new Corvette has come out looking pretty strong. Also, the Risi team know how to run here so we just have to see how it pans out.”

Pfaff Motorsports took GTD pole for Porsche, Zacharie Robichon on a sustained charge that delivered a 1:45.237, this his third IMSA pole and a new qualifying lap record for the GTD class. 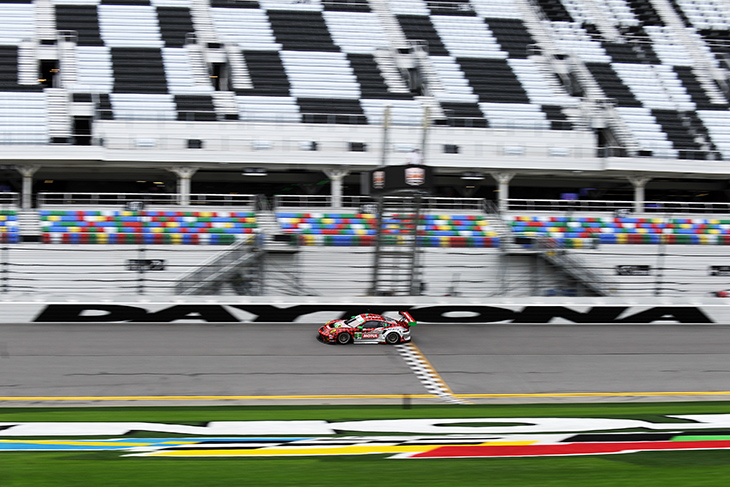 The #63 Scuderia Corsa Ferrari will line up alongside the Porsche, Jeff Westphal posting 1:45.713 in the Weathertech liveried 488 GT3 Evo, while Trent Hindman’s 1:45.837 placed the #57 Heindricher Racing with MSR Curb-Agajanian Acura NSX third.

These three were fairly untroubled for the position, but the fourth to sixth positions churned between the #96 Robbie Foley driven BMW, the #11 GRT Grasser Racing Team Lamborghini Huracan and the #88 Audi R8 LMS GT3 of Rolf Ineichen, which had topped the earlier practice sessions.

Foley’s 1:45.872 kept the #96 Turner Motorsport BMW M6 GT3 in fourth place, the Grasser and WRT Speedstar cars fifth and sixth respectively. The top six in GTD were separated by less than a second.

Missing from the session was the #14 AIM Vasser Sullivan Lexus, sitting out session with the engine change, but the #23 Heart of Racing Aston was on track despite its 5 minutes penalty, which affects their next night practice session rather than qualifying. The Aston Martin Vantage GT3s will line up for their first Daytona 24 hours eleventh and twelfth in class.

Zacharie Robichon: “Looking back at the Roar we worked really hard to get the car where we wanted it. This morning we had confidence in the car and just went with it, so the pole is a great reward.

The car is clad in a fetching plaid, which has now transferred over into our race suits… with the bottom half and the belt in the design too I kinda feel like I would at home in this outfit..!”